Democratic Gov. Tony Evers ordered a rainbow flag fly above the state Capitol for the first time in state history, a decision praised by Democrats for promoting inclusivity and derided by some Republicans who said it was divisive.

June is Lesbian, Gay, Bisexual, Transgender and Queer (LGBTQ) Pride Month and the flag will fly through the end of the month.

“Publicly displaying the Rainbow Pride Flag sends a clear and unequivocal message that Wisconsin is a welcoming and inclusive place where everyone can live without fear of persecution, judgment or discrimination,” Evers said in a statement.

Rep. Scott Allen, R-Waukesha, asked in a tweet if flying the pride flag over the Capitol was any more appropriate than a Christian flag.

Allen, who describes himself on his Twitter bio as a “Child of God/Family Man,” did not return a call for comment Friday. He told The Associated Press that the rainbow flag “advocates a behavior or lifestyle that some Wisconsin residents may not condone. Therefore, it is divisive.”

“The only cause that the Capitol flags should represent is fifty states united in one republic,” Craig wrote on Twitter.

The U.S. flag, the state of Wisconsin flag and a black-and-white flag recognizing soldiers who have been prisoners of war or missing in action typically fly over the state Capitol.

In a statement, Wisconsin Family Action president Julaine Appling called the gay pride flag “a flagrant abuse of gubernatorial power” and likened it to flying a Christian flag or a Nazi flag over the Capitol.

The action “is proclaiming one group of Wisconsin citizens as preferred over others,” Appling said.

Appling also noted Wisconsin approved a constitutional amendment defining marriage as between a man and woman in a 2006 referendum that passed with 59.4% support. The U.S. Supreme Court struck down gay marriage bans in 2015.

“This is a very welcoming sign to many of us and it signifies a new direction for Wisconsin,” said Sen. Tim Carpenter, D-Milwaukee, the only openly gay state senator currently serving in the Legislature. “We are showing that we are a welcoming and inclusive state and that means a great deal.”

U.S. Rep. Mark Pocan, D-Black Earth, who is gay, told reporters in a Friday news conference that conservatives criticizing the move may fundraise a few dollars, but their “old, antiquated” stance is not mainstream, even among Republicans.

“There’s some people who always profit from hate, right?” Pocan said. “It’s good to raise money on. It’s good to put that out there every now and then and get that part of the base excited and send you a few bucks.”

Madison Mayor Satya Rhodes-Conway, the city’s first openly gay mayor, raised a rainbow pride flag over the Madison Municipal Building earlier this week. The building will also be lit in the evening with rainbow colors throughout the month.

“So beautiful,” Hilda Riva Cepeda whispered to her partner, Naomi Cepeda Riva, as the flag rose.

The Madison residents married last year in a Long Beach, California, ceremony and said they have not experienced specific acts of discrimination in Wisconsin.

When they heard the news about Friday’s flag raising, they hurried over to the Capitol to witness it.

“It’s a big accomplishment for our community,” Riva Cepeda said. “And it shows a lot of support from our government. It means a lot to me.”

Blank's letter comes after a report that the Trump administration is considering restricting the definition of gender to be determined by one's genitals at birth.

Some Republican lawmakers have criticized Gov. Tony Evers for flying the rainbow gay pride flag at the State Capitol in honor of pride month i…

US flag shows equal rights for all -- Jacque Shimko

We only need one flag -- the one at the top of the pole.

Flying the rainbow flag over our state Capitol has given me pride to be from Wisconsin. Thanks, Gov. Tony Evers.

A flag is a powerful symbol of unity for a nation or state. It's representative of the total experience of all people, both past and present, …

Flags should honor service to all -- Michael J. McGoff

Would someone please read the flag code?

Being inclusive can be divisive -- Nancy Larson

The American flag is supposed to be an inclusive symbol of freedom. Will we now be required to fly flags for every minority group?

Phil Hands: Biden, big tech and a big flap over a flag in this week's cartoon roundup

Some UW campuses raising pride flags, but not UW-Madison

At least five UW campuses have taken a cue from Democratic Gov. Tony Evers, who ordered a pride flag fly above the state Capitol through the end of the month as a sign of support and solidarity for LGBTQ individuals.

The flags will be raised in celebration of the 50th anniversary of Stonewall, a series of riots that served as a catalyst for the gay rights movement.

The facility’s "influx" shelter status suggests children are kept there only briefly. Pocan said girls there told him their stay at Homestead has dragged on for as many as 75 days.

After heated controversy surrounding whether police officers should be allowed to march, and logistical hurdles, there will be no Pride Parade in Madison this year.

Rainbow flag murals may be front and center this summer

A new proposal would install a series of rainbow flag murals along the Capital City State Trail and at the top of State Street. 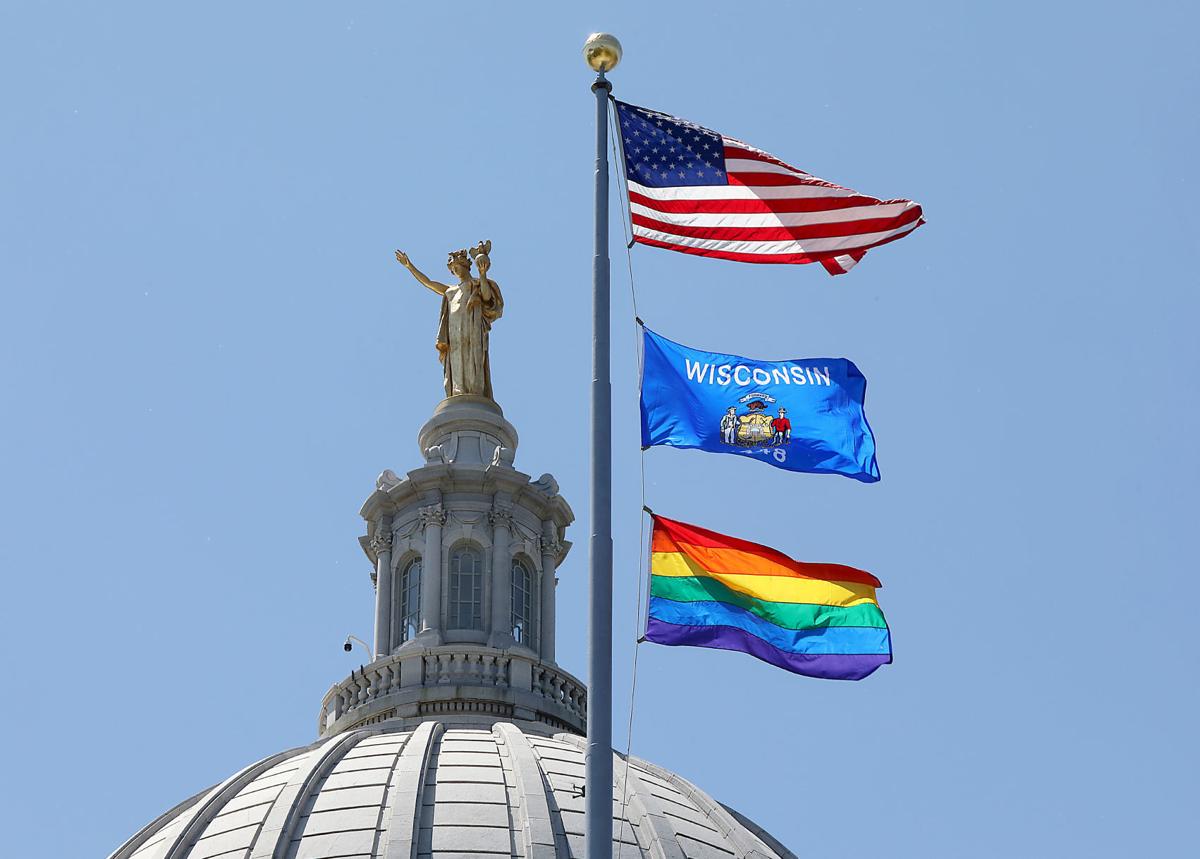 A rainbow flag observing Pride Month was raised Friday over the East wing of the state Capitol. Gov. Tony Evers ordered the rainbow flag be raised above the Capitol for the first time in state history. 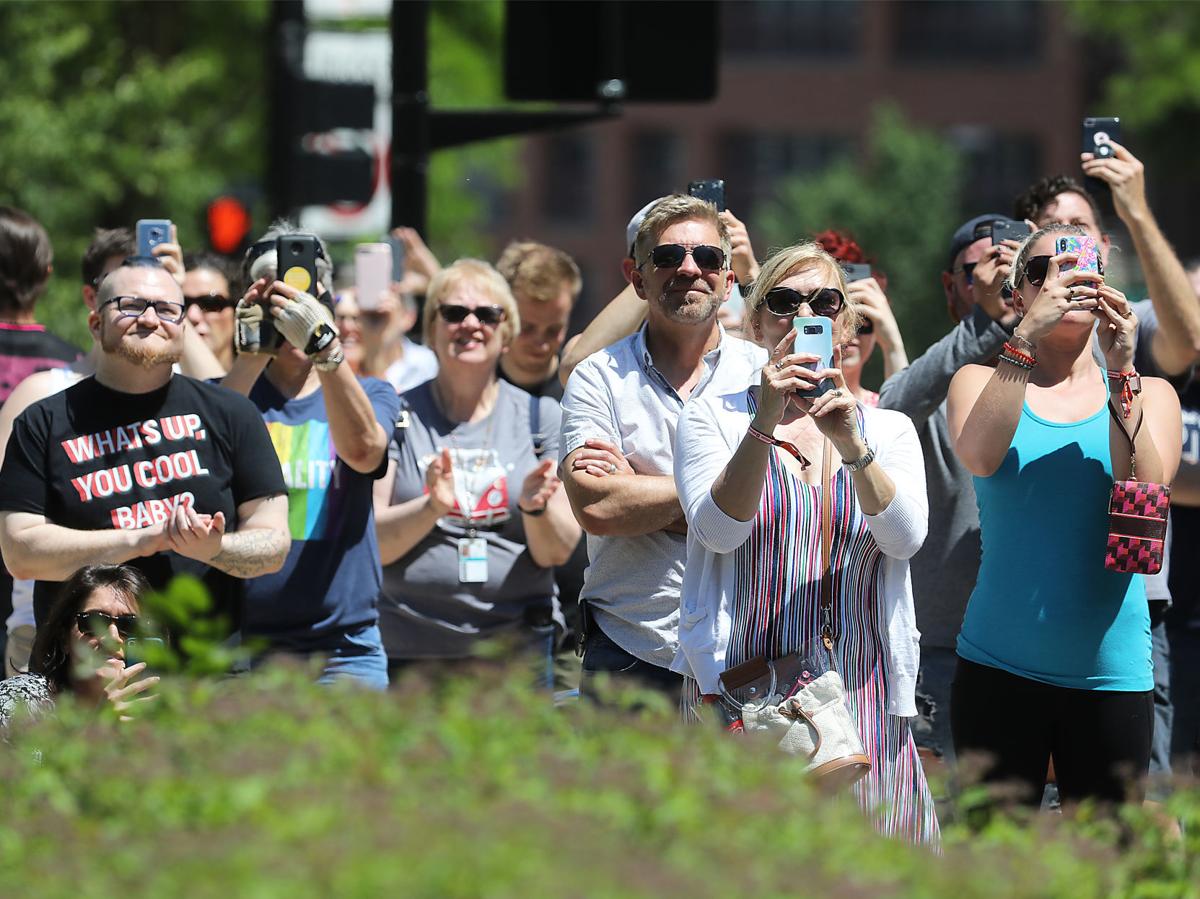 A crowd watches as a rainbow flag observing Lesbian, Gay, Bisexual, Transgender and Queer (LGBTQ) Pride Month is raised Friday over the East wing of the state Capitol for the first time in Wisconsin's history. 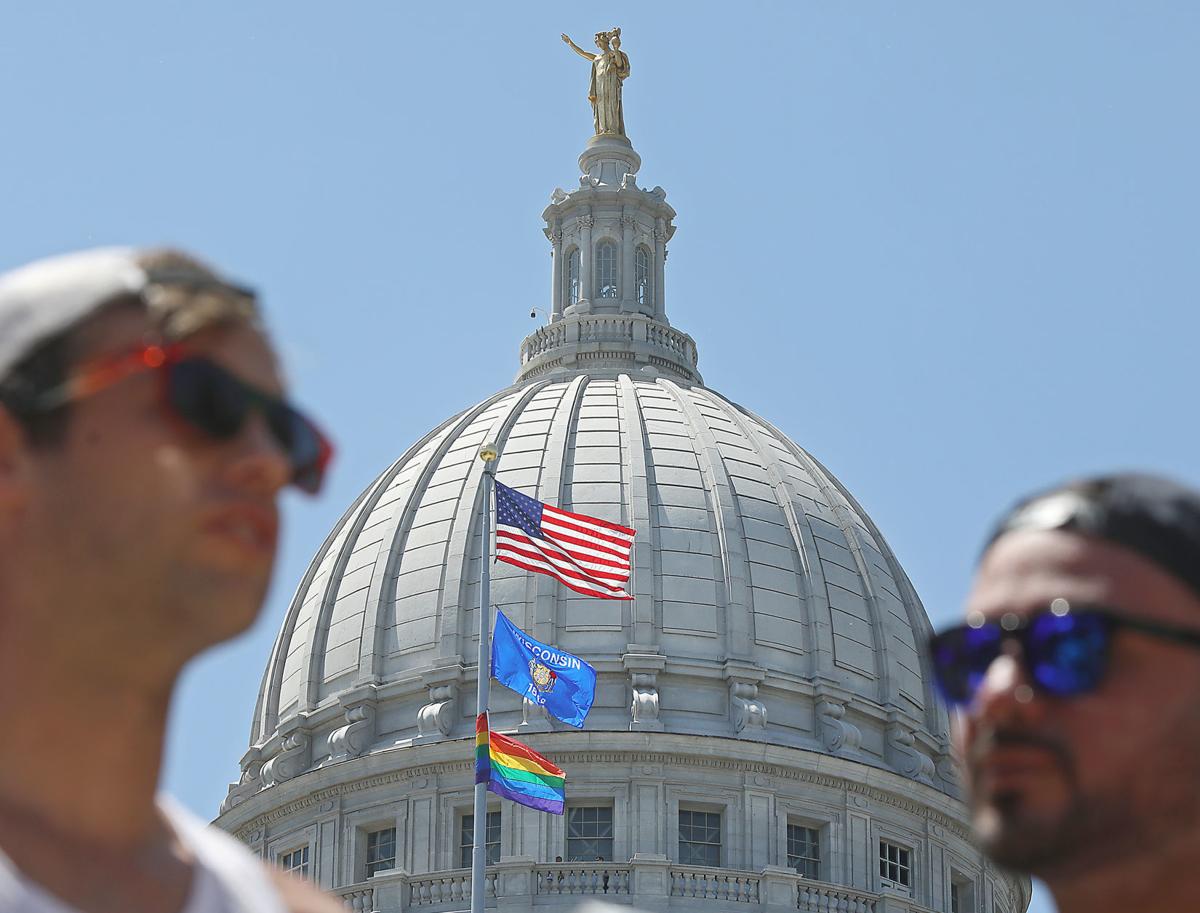 Clay Thomas, left, and Yosh Mayans, supporters of LGBTQ rights, were among those at the state Capitol after the rainbow pride flag was raised.