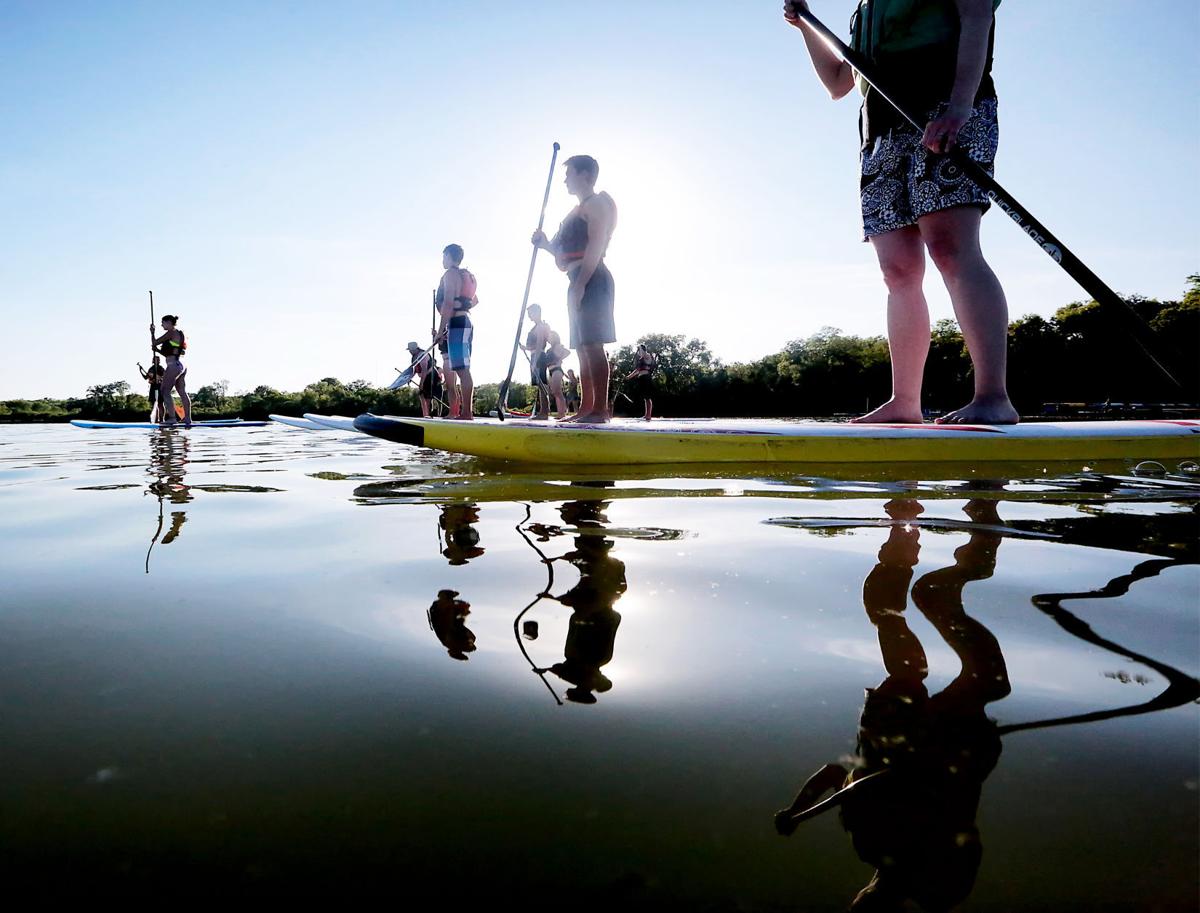 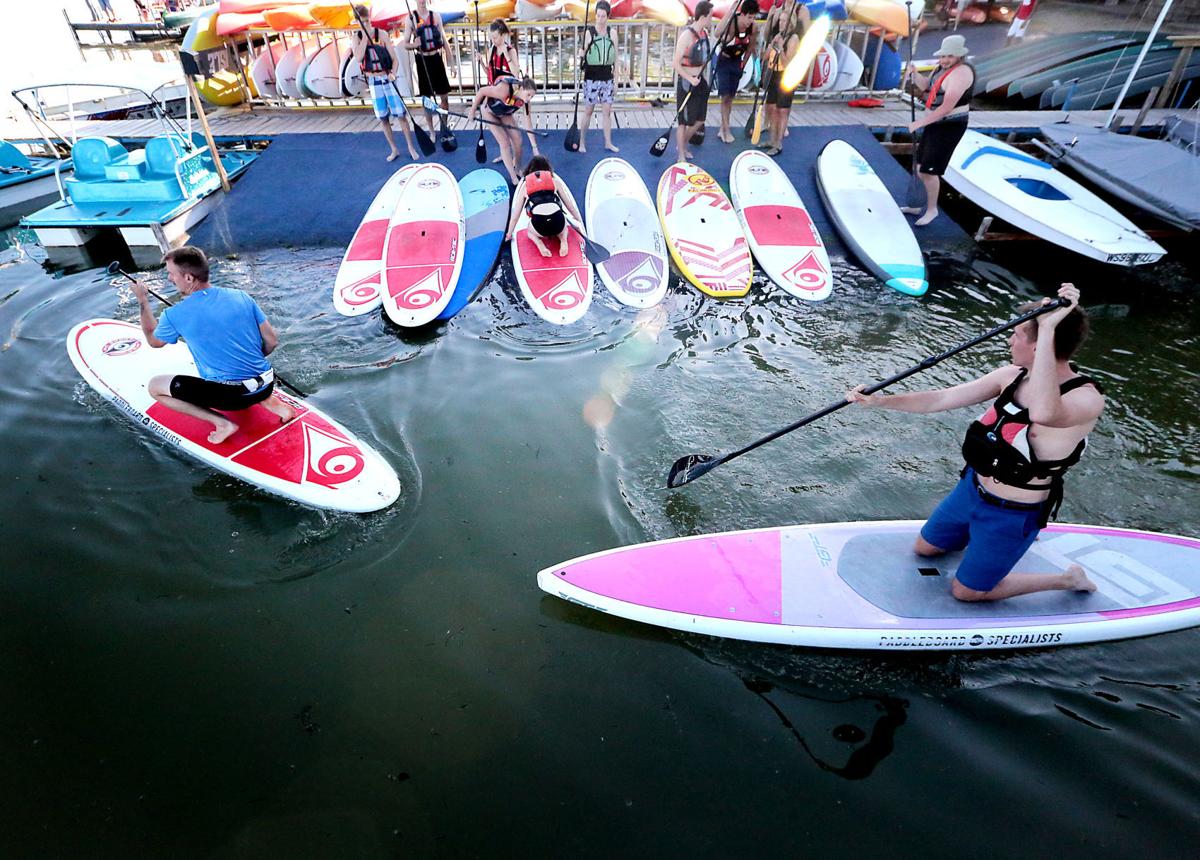 Participants in a paddleboard course for counselors at Camp Wingra prepare to navigate their way from the shoreline of Lake Wingra. A proposal to eliminate the state's personal flotation device requirement for stand-up paddle boarders was introduced in the state Legislature last month. 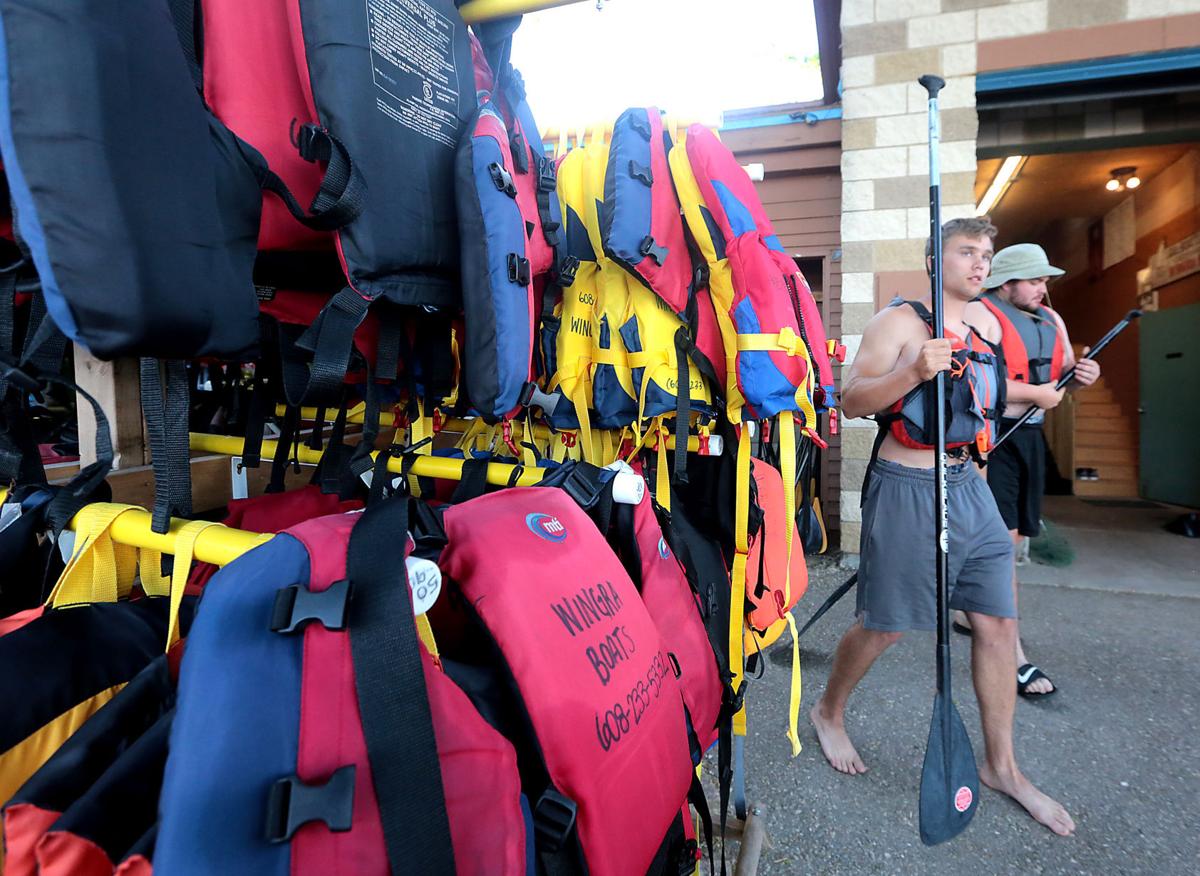 For Amelia Horn, grabbing a life jacket before hitting the water on a stand-up paddleboard is a no-brainer.

“The more you know about boating, the more you realize the less you can expect,” she said on the shore of Lake Mendota in Middleton’s Marshall Park. “It’s really easy to have one with you. It takes two seconds to throw on your board and it could save your life.”

Horn, 19, of Madison, always has a flotation device with her when she’s gliding through the water on the paddle-propelled board resembling a surfboard. State law requires all stand-up paddleboaders to have one on board while on the water.

Now, as the activity’s popularity swells, some Wisconsin lawmakers would like to eliminate flotation device requirements for stand-up paddleboarders.

A bill introduced in the state Legislature last month would exempt Wisconsin stand-up paddleboarders who are at least 18 years old from having to wear or have a flotation device with them.

Sailboarders and windsurfers are already exempt from the law.

“A lot of times, people aren’t taking these things out in treacherous water ... they’re out on flat glass water,” said one of the bill’s authors, Rep. Paul Tittl, R-Manitowoc. “We should leave it up to the individual whether they should wear a flotation device or not.”

Boats, canoes, kayaks and paddleboards are currently required to have at least one federally approved flotation device per passenger. Children under age 13 must wear a flotation device while on a vessel in federally controlled waters.

If passed, the state law wouldn’t apply to federally controlled waters like lakes Superior and Michigan and the Mississippi and St. Croix rivers.

The bill would also be amended to require stand-up paddleboarders to be tethered to their boards if they choose not to use a flotation device, Tittl said.

He said he hopes the bill will get a committee hearing in July.

The bill was inspired by a constituent who told Tittl about a ticket she was issued for violating the law, he said, adding that paddleboarders who kneel or lie on the board and use their hands to move through the water aren’t required to have a flotation device.

The fine for violating the law is $162.70, according to the state Department of Natural Resources.

Last year, the DNR issued 677 citations for violating the flotation device law, though those numbers aren’t broken down by type of vessel. An average of about 679 tickets have been issued each year since 2012.

For 34-year-old paddleboarder Luke Steinbach — who was cited for violating the law last year — the current law doesn’t make sense because stand-up paddleboarders aren’t required to wear a flotation device, just have one on board.

“The irony of it all is that you don’t even have to wear it,” he said. “I could have it inside my water bag when my water bag is completely sealed and if I’m drowning there’s no way I can get to it.”

Steinbach said the case was dismissed after he showed the judge a receipt for a flotation device he bought.

“A lot of people just feel they’re confident in their skills … but those are the people that then get injured and have the biggest issues,” said Stephan Reinke, general manager of Brittingham Boats on Monona Bay in Downtown Madison. “There’s not very many good reasons not to wear one. I think they’ll appreciate it when they’re stranded in the middle of the lake.”

The proposed change comes amid a surge of interest in the activity. Between 2010 and 2015, participation in stand-up paddleboarding increased more than 187 percent, according to a 2016 report by the Outdoor Foundation.

Brittingham Boats has about 85 paddleboards to rent, up from a dozen in 2013, Reinke said.

Since 2010, 16 paddleboarders have died nationwide due to drowning or falling off of their boards, according to the canoe association.

In more than 90 percent of boating deaths involving drowning, the victim wasn’t wearing a flotation device, according to the DNR.

Regardless of whether a new law exempts paddleboards, Tyler Leeper, general manager of Marshall Boats and president of Madison Boats, said he’ll continue to require that paddleboard renters have a flotation device with them while on the water.

“It’s the easiest insurance policy to take that potential accident and potential problem and eliminate the risk,” he said. “By being able to have a flotation device all of a sudden you’re able to get through potential bad situations.”

Awards were handed out Wednesday afternoon at the Alliant Energy Center in Madison.

Tyler Leeper, president of Wingra and Brittingham Boats, has a tentative agreement with the city to improve the Marshall Park beach house and add a public pier and cafe.

Many vehicles heading out onto frozen lakes in Dane County are required to have flotation equipment, and the equipment needs to be inspected.

Participants in a paddleboard course for counselors at Camp Wingra prepare to navigate their way from the shoreline of Lake Wingra. A proposal to eliminate the state's personal flotation device requirement for stand-up paddle boarders was introduced in the state Legislature last month.