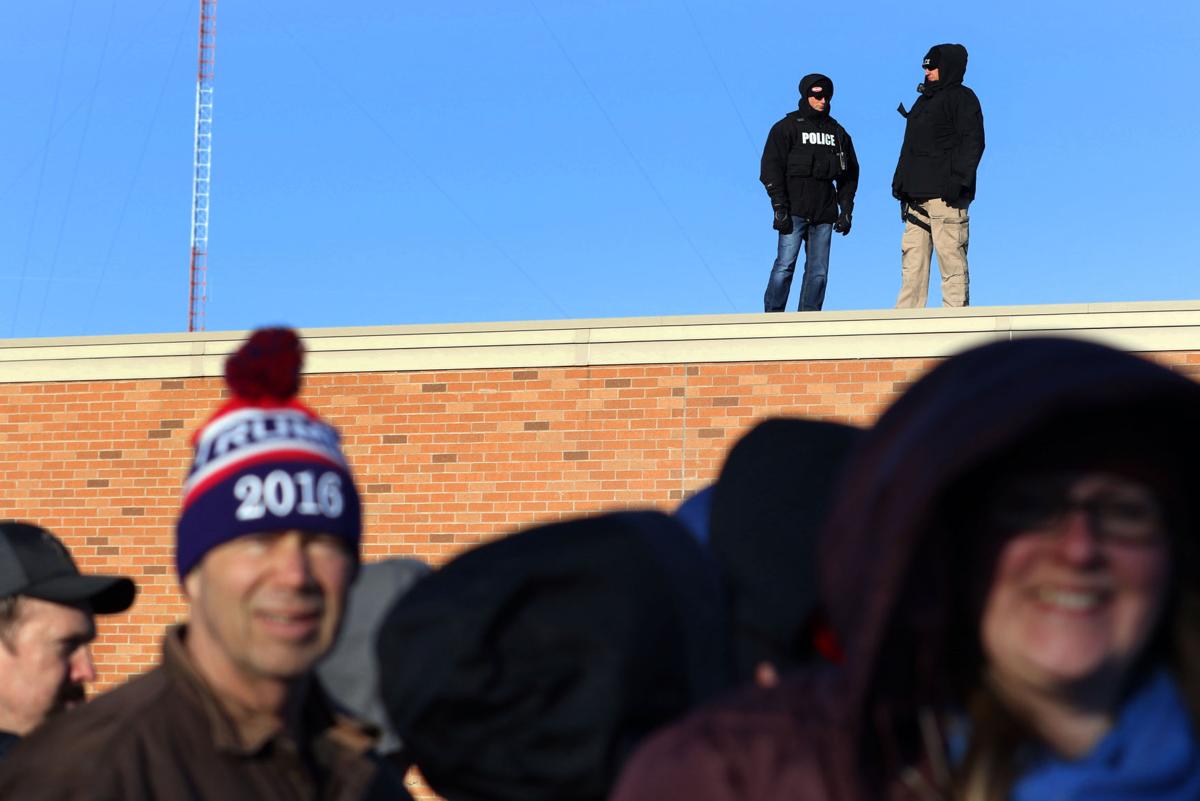 Law enforcement personnel monitor the crowd outside of Eau Claire Memorial High School as they wait to enter a Donald Trump rally in April. 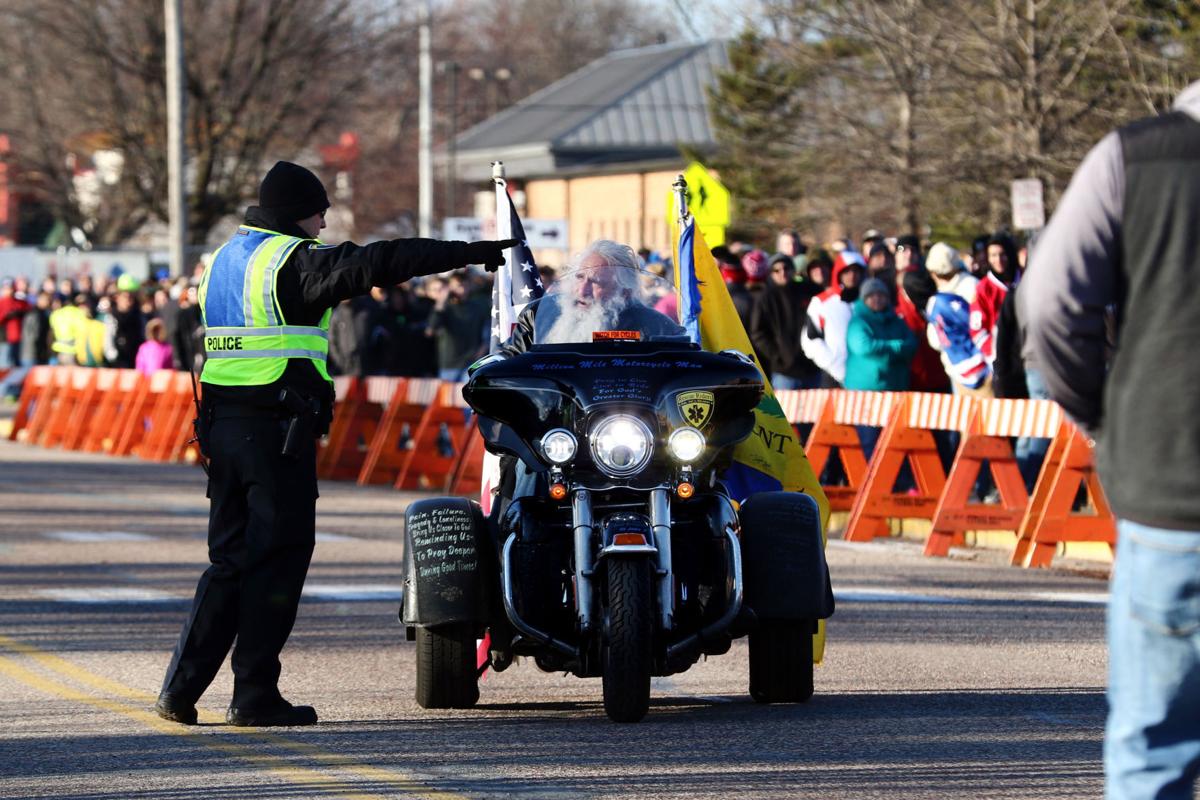 A police officer directs Dave Zien where to park his motorcycle as a crowd waits outside of Eau Claire Memorial High School to see Donald Trump speak in April. 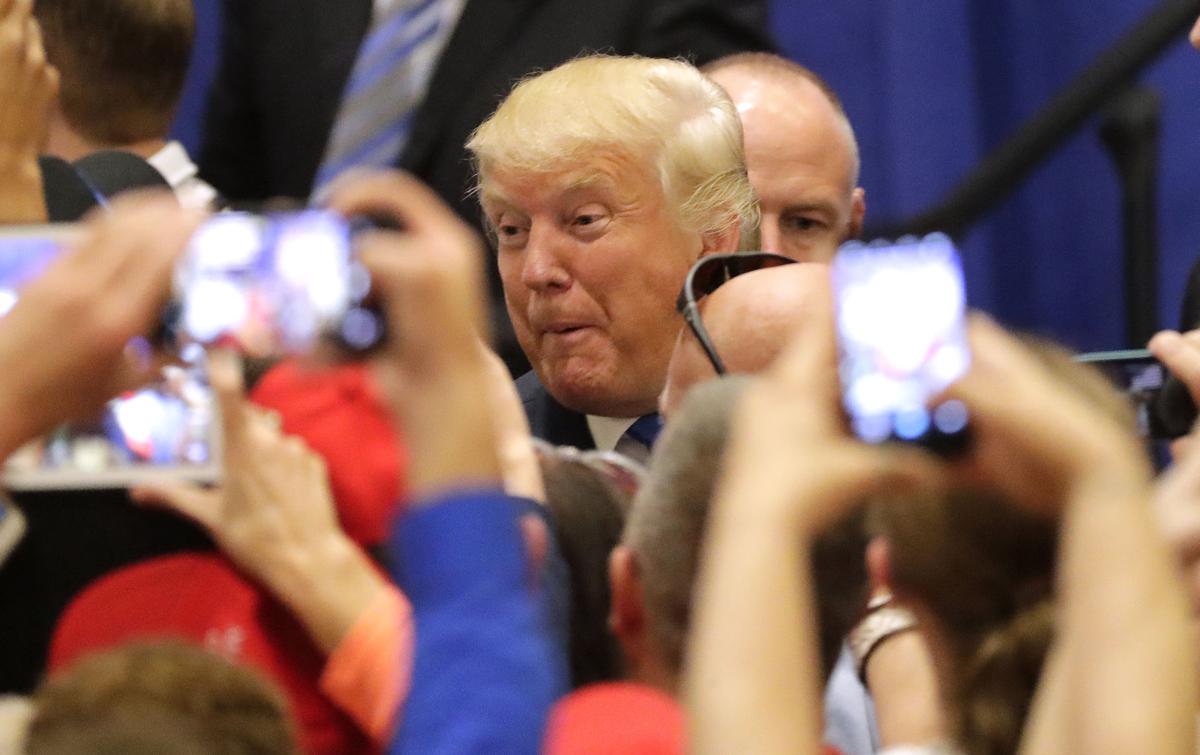 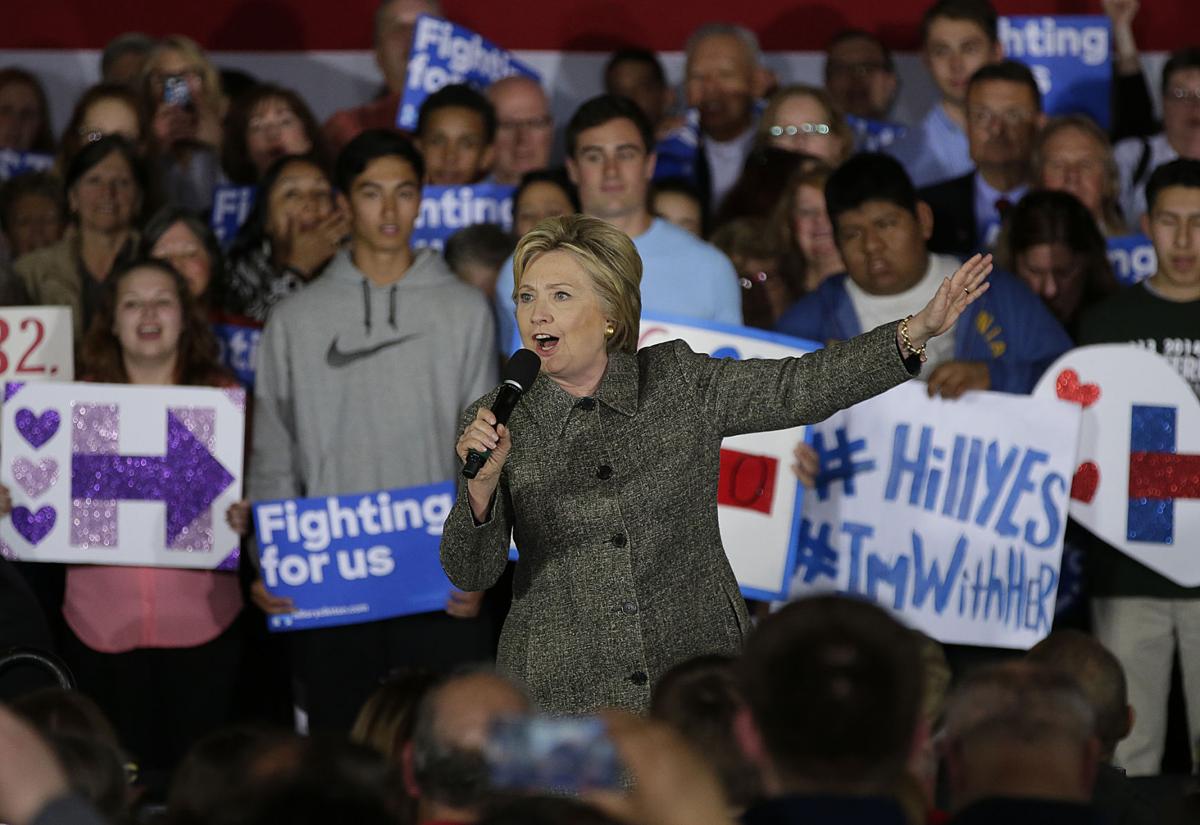 Democratic presidential candidate Hillary Clinton spoke in Green Bay in March prior to the Wisconsin primary. 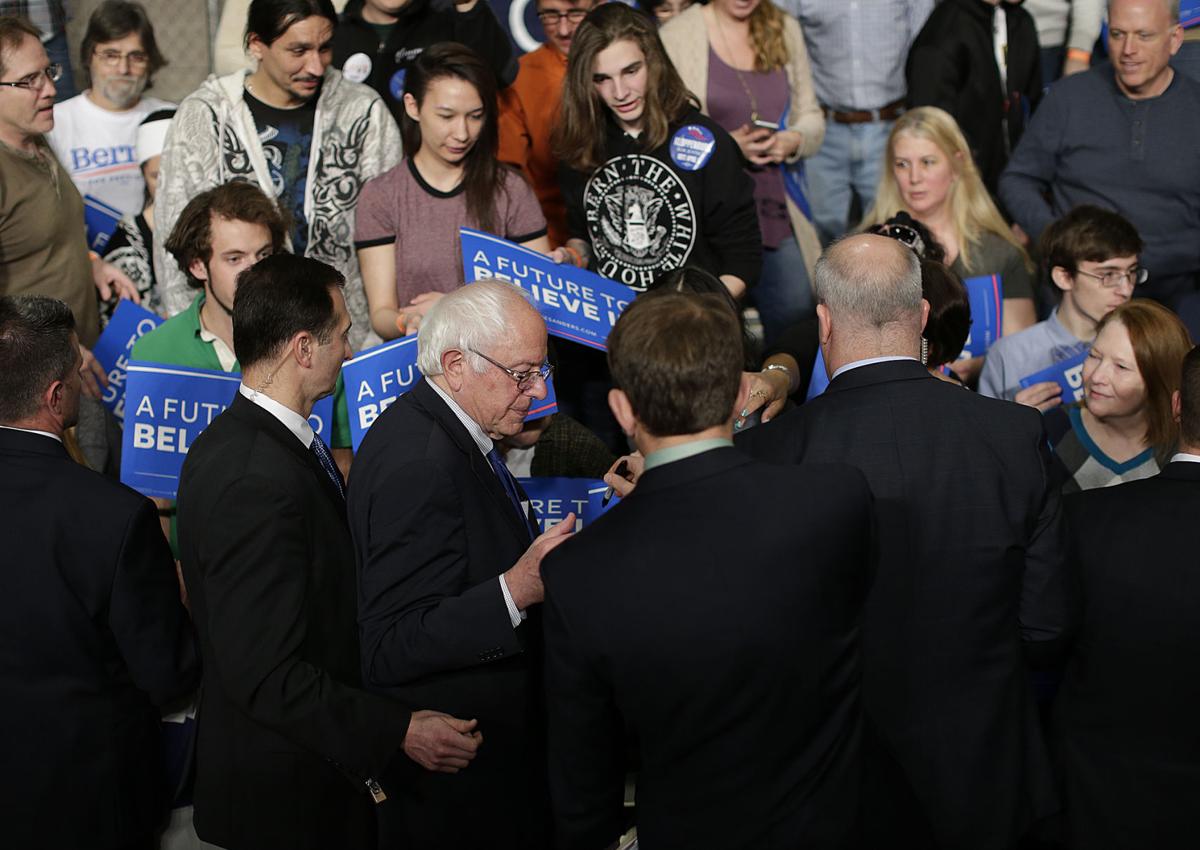 Donald Trump, Hillary Clinton and Bernie Sanders may not remember much about the rallies they each held last year in Green Bay.

But officials at Green Bay City Hall sure do. And they’re miffed the three politicians have stiffed them on police protection bills totaling $24,000.

“We appreciate, and we feel honored, when the candidates come to Green Bay,” said Celestine Jeffreys, chief of staff to Mayor Jim Schmitt. “We are also very appreciative when they honor their debts.”

Green Bay is no anomaly.

At least three dozen municipal governments and law enforcement agencies say presidential campaigns have ignored hundreds of thousands of dollars in outstanding bills stemming from police security for campaign events — from Vallejo, California, to the University of Pittsburgh.

That’s according to a Center for Public Integrity analysis of federal campaign disclosures and municipal invoices, as well as interviews with more than 60 local government officials.

Some cities, such as Madison, have not even bothered to bill campaigns for security costs for their visits. Katie Crawley, Madison’s deputy mayor for public works and communication, said that decision was based on the city’s inability to collect on bills issued during past campaigns.

Madison police incurred about $78,000 in overtime and benefit costs for securing visits by Sanders, Clinton and Ted Cruz — and for assisting Janesville police at a Trump event in that city, according to figures provided by Crawley to the Wisconsin State Journal. That doesn’t include possible costs to other city agencies or other law- enforcement agencies.

Presidential campaigns asserted in communications with some city governments that they’re not responsible for many security costs. But this widespread failure to pay follows an election season when many presidential candidates — particularly Trump — argued that law enforcement deserved both more resources and more respect.

Local cops also found themselves in the midst of numerous unruly, even violent, Trump rallies, with Trump himself sometimes directing security to eject protesters and hecklers.

Trump’s campaign alone hasn’t paid nearly $204,000 worth of police-related invoices, according to municipal billing records obtained by the Center for Public Integrity.

That’s because the Trump campaign — despite receiving demand letters and collection notices — doesn’t acknowledge in federal campaign financial disclosures that it owes cities a cent. Nor does the Clinton campaign. The Sanders campaign, in contrast, says in federal campaign filings that it owes $449,409, spread among nearly two dozen municipalities and law enforcement agencies.

The differing approaches make it difficult to determine just how many security-related bills have been sent to the major White House hopefuls since their campaigns began touring the nation in earnest in mid-2015.

Last week, Trump marked National Law Enforcement Appreciation Day by tweeting six pictures of himself standing with police officers and other emergency personnel: “Thank you to all of the men and women who protect & serve our communities 24/7/365!”

But officials in Tucson, Arizona, say Trump owes the city $81,837 for security and traffic control services during his “Make America Great Again Rally” on March 19. Spokane, Washington, is still waiting for Trump’s campaign to pay a bill of $65,124.

Officials in Eau Claire also want reimbursement, noting in a Sept. 27 demand letter to Trump’s campaign that his visit on April 2 “incurred a significant amount” of costs for the city of 68,000. The charges range from calling in help from three nearby police departments to providing cops with pizzas while they stood guard throughout the day.

The Trump transition team did not respond to numerous requests for comment regarding its unpaid police protection bills or how it determined which police bills to pay or not pay.

The Trump campaign in December disclosed having more than $7.6 million remaining in its account. The only debt it reported was a $766,756 campaign polling expense that it labeled as contested in federal filings.

Clinton, like Trump, talked a blue streak about boosting law enforcement, saying during an August meeting with law enforcement officials that she supported providing police “with the resources they need to do their jobs.” But Clinton’s campaign, too, has failed to pay some police bills.

Green Bay officials say the Clinton campaign has yet to pay off bills from events in March, September and November totaling nearly $12,800. Eau Claire says Clinton won’t pay a $6,812 from a visit in April.

Clinton’s campaign committee has enough money to pay its bills, having last month reported carrying a more than $838,000 surplus on its books. It did not report police bills from Philadelphia, Green Bay or any other locality as campaign debt.

The Sanders campaign in December reported to the Federal Election Commission that it owed 23 local governments and law enforcement agencies a combined $449,409 for “event security.” In its filing, the Sanders campaign doesn’t dispute the debts.

“I am concerned that the campaign was overly selective as to what service/organization they would reimburse for protective services rendered,” Gossage wrote back, noting that the Sanders campaign did pay one of its bills — all $11,472 of it — that Green Bay’s city government sent it.

“I received no reply,” Gossage said.

Whether cities charge campaigns depends upon the cities themselves.

Some officials explained that the exercise is pointless because campaigns over the years have rarely paid them back. Others consider police protection of political events part of their taxpayer-funded responsibilities — similar to policing a holiday parade or a peaceful public protest.

Another reason for not sending bills: Local officials don’t want to dampen the economic benefits — full restaurants, happy hoteliers, etc. — of an event attracting thousands of people. Some local officials said they feared the campaigns might go elsewhere if they haggled over bills.

For his part, Mayor Dan Devine of West Allis, which twice hosted Trump campaign events last year, wishes all presidential candidates would just pay up. Devine notes that candidates often conduct campaign fundraisers before and after public events, and they receive municipal police services for them, too.

“Morally, it’s the thing to do,” he said of candidates paying for local police protection. “City resources are already stretched thin without presidential candidates visiting. I’ll definitely be doing my homework before late 2019.”

The Center for Public Integrity is a nonprofit, nonpartisan investigative news organization in Washington, D.C. This story was distributed by the Wisconsin Center for Investigative Journalism.

Priebus, the first chief of staff from the Badger State, faces a unique challenge in managing Donald Trump's presidency.

Law enforcement personnel monitor the crowd outside of Eau Claire Memorial High School as they wait to enter a Donald Trump rally in April.

A police officer directs Dave Zien where to park his motorcycle as a crowd waits outside of Eau Claire Memorial High School to see Donald Trump speak in April.

Democratic presidential candidate Hillary Clinton spoke in Green Bay in March prior to the Wisconsin primary.