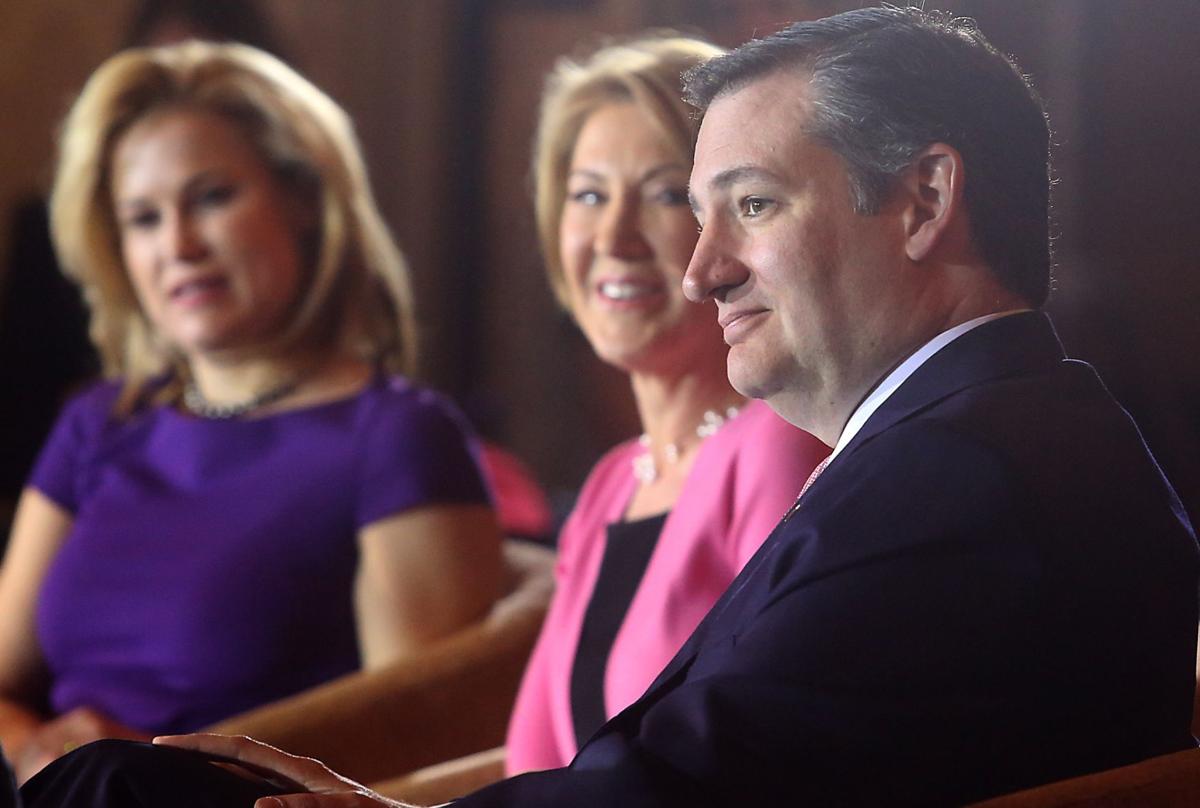 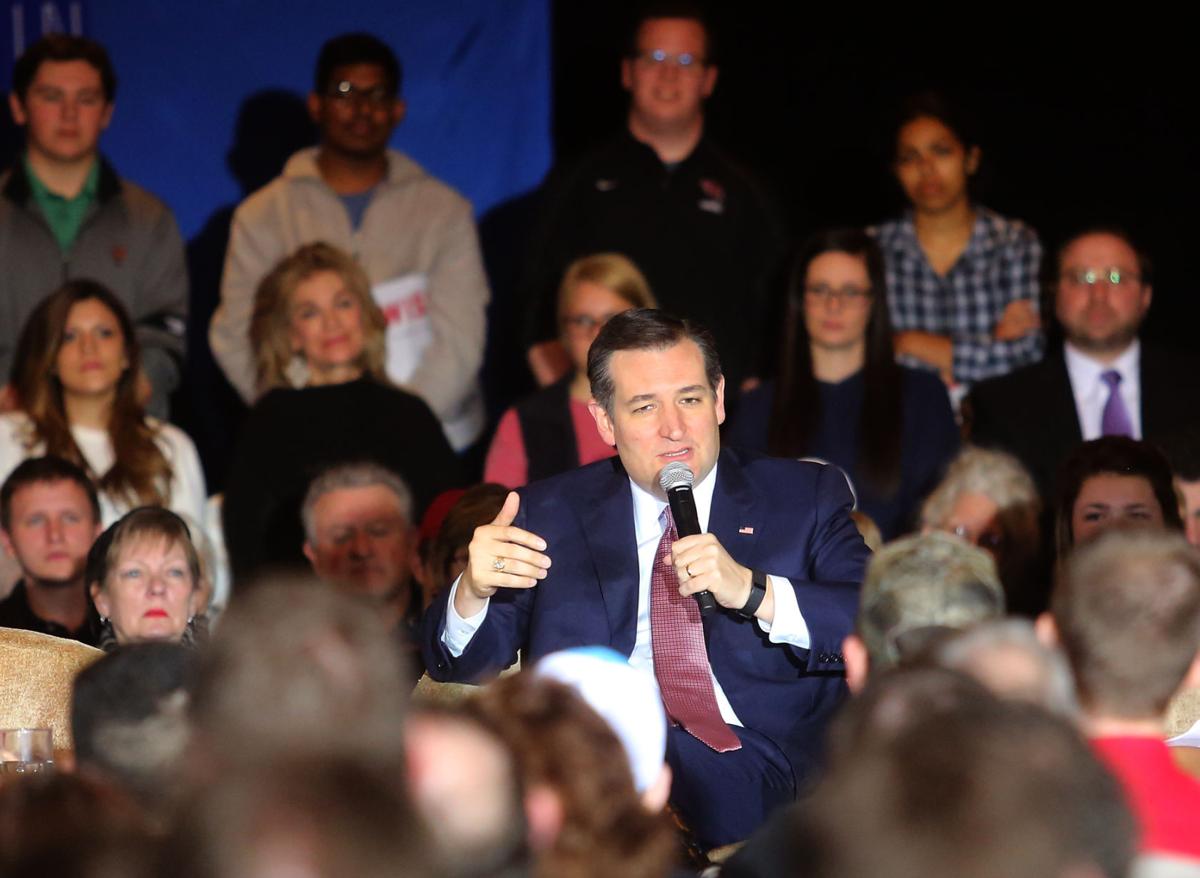 Republican presidential candidate Ted Cruz addresses supporters at an event in Madison. Cruz trails Donald Trump in the national delegate count, but with the backing of Wisconsin conservatives has opened a double-digit lead in the state ahead of next Tuesday’s primary.

Texas Sen. Ted Cruz has leaped ahead of Republican front-runner Donald Trump in Wisconsin, while Vermont Sen. Bernie Sanders has an edge over Democratic leader Hillary Clinton, according to the latest Marquette Law School Poll.

Released Wednesday, the poll comes less than a week before Wisconsin’s presidential primary on Tuesday, a critical contest for all campaigns.

Cruz is looking for a victory to blunt Trump’s momentum toward the nomination, while Ohio Gov. John Kasich seeks a good showing to remain in the conversation, and Sanders hopes another lopsided win dents Clinton’s sizable delegate lead.

In the poll of 957 likely voters, Cruz received support from 40 percent of likely Republican voters, Trump got 30 percent, and Kasich trailed with 21 percent support. Sanders held a 49-45 lead over Clinton among likely Democratic voters.

The Democratic sample included 405 voters and a margin of error of 6.3 points.

The last Marquette poll in February showed Trump with a double-digit lead in the battle for the GOP nomination, but the landscape has changed immensely since then. That poll was taken before Florida Sen. Marco Rubio and retired neurosurgeon Ben Carson dropped out of the race.

The latest poll comes as Trump, Cruz and Kasich have begun campaigning in Wisconsin, conservatives have weighed in heavily for Cruz and against Trump, and outside groups have begun spending millions of dollars to influence the outcome of the race.

In the days before the poll was taken, Trump and Cruz engaged in a pitched battle involving the physical appearance of their wives.

Other polls out in the past week show a tightening race, though unlike the Marquette poll they use automated calls and don’t attempt to call cell phones, according to Marquette poll director Charles Franklin.

The last Marquette poll showed Sanders with a small lead over Clinton within the poll’s margin of error. Clinton has been steadily losing ground to Sanders over the course of several Marquette polls dating back over the past year. In November she led Sanders 50-41.

The Republican primary awards three delegates to the winner of each congressional district, so Kasich could snag delegates if he wins the heavily Democratic 2nd Congressional District centered on Madison.

Kasich has argued he has the best shot against Clinton in the general election. The poll demonstrated that in Wisconsin, with Kasich leading Clinton 48-39 in a hypothetical matchup, whereas Cruz is tied and Trump lags by 10 points. Sanders leads all three Republicans, though Kasich by only two points.

Trump’s strongest areas are in the northern and western parts of the state in areas covered by the 3rd and 7th congressional districts, though Cruz only trailed by one point. Cruz also held a lead in the Green Bay media market and had a two-point lead over Trump among respondents without a college degree.

State Rep. James Edming, R-Glen Flora, the first state lawmaker to publicly back Trump, said he is confident Trump will win in his district, located in the northwest part of the state, far from the influence of Milwaukee area conservative talk radio, which battled with Trump this week.

“The more the news media and the press bashes him, the harder hit he’s going to make,” Edming said. “That just makes me ugly. If you can’t get out there to say what you want to say, don’t bash the other guy.”

Sanders has the largest lead in the Madison region, but he also has a slight advantage in the Milwaukee region. Clinton has performed better in states with large minority populations. Franklin said the results show “turnout on Tuesday could make interesting differences.”

Cruz and Sanders held events in Madison on Wednesday, while Trump held rallies in De Pere, Appleton and Green Bay after slamming Gov. Scott Walker at a rally in Janesville on Tuesday. Walker endorsed Cruz on Tuesday.

Walker on Wednesday predicted Cruz would defeat Trump and Kasich next week, and carry the momentum from Wisconsin through the rest of the primary campaign.

“I think that’s going to be one of the turning points in the campaign,” Walker said. “I think that will set him on pace to go into the convention in Cleveland with 1,237 (delegates), and to unite the party behind our nominee and to take on Hillary Clinton.”

Walker did not answer when asked whether he would support Trump in the general election if the business mogul wins the Republican nomination.

• Poll results for other races, Walker. A7

"Ted is a constitutional conservative," Walker says in the ad.

It's all presidential politics all the time as Republican and Democratic candidates crisscross Wisconsin ahead of Tuesday's primary. Also, UW-…

Three Republican and two Democratic presidential candidates are vying for votes as high turnout is expected.

The poll is the first since Donald Trump and Hillary Clinton became their party's presumptive nominees.

National observers agree Sanders needs a string of wins, including one here on April 5, to maintain a viable path to the nomination.

The 2016 presidential election has arrived in Wisconsin

All five campaigns are setting up offices in the state and all are expected to make visits.

All of this presidential election talk got us thinking about past trips to the polls. Wisconsin has one of the longest traditions of holding p…

Republican presidential candidate Ted Cruz addresses supporters at an event in Madison. Cruz trails Donald Trump in the national delegate count, but with the backing of Wisconsin conservatives has opened a double-digit lead in the state ahead of next Tuesday’s primary.