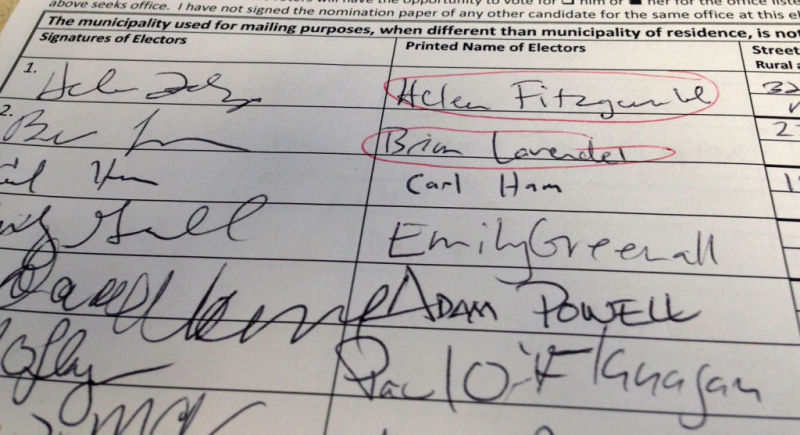 The Government Accountability Board said no candidates were dismissed from fall ballots for turning in too many illegible printed names. 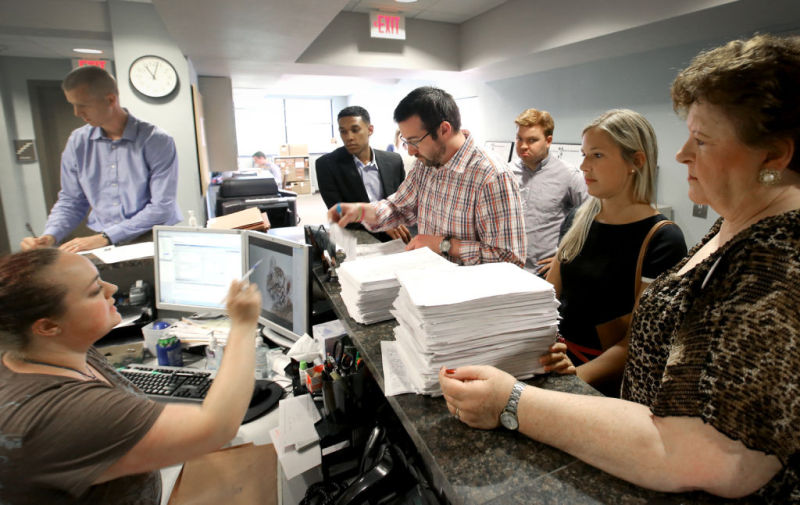 The office of the Government Accountability Board in Madison bustled with activity Monday as candidates running for state offices filed paperwork. Requirements now include printed names along with citizen signatures. 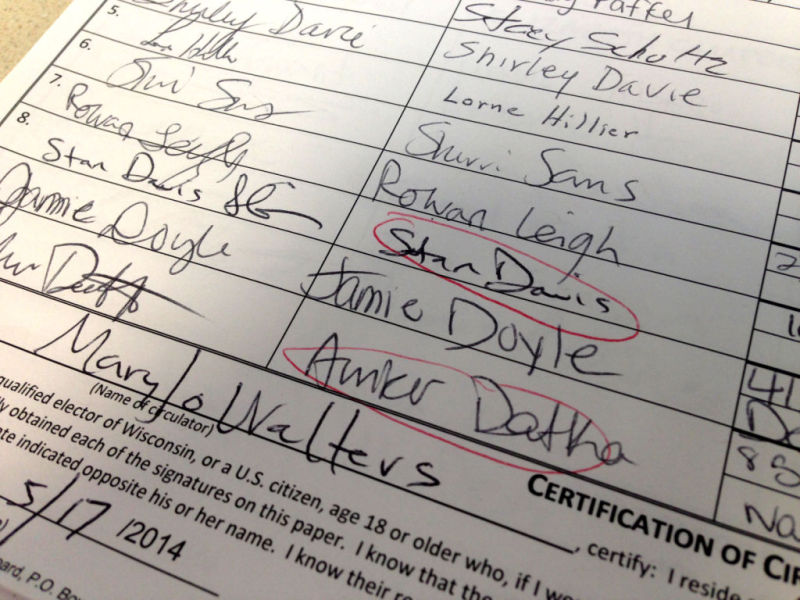 The Government Accountability Board is being criticized for strictly interpreting a law requiring signers of nomination papers to legibly print their names. The names circled in red were disallowed as illegible.

The Republican chairwoman of the Assembly Campaigns and Elections Committee chastised the state elections agency Tuesday for its strict application of a new law requiring printed names on candidate nomination forms.

Several candidates reported either an unusual number of signatures disallowed by Government Accountability Board staff or specific examples of legible names being stricken. The State Journal reviewed 90 stricken names from one candidate’s nomination papers and found several legible examples.

“I am disappointed as a colleague of the GAB that they would go this far,” Rep. Kathleen Bernier, R-Chippewa Falls, told the State Journal.

GAB spokesman Reid Magney said the new law was creating a challenge for staff and resulting in more names being stricken than in the past. But he defended the process, noting the new state law requires each signer to “legibly print” his or her name on the petition.

“Our interpretation is that to qualify, a name must be both printed and legible,” Magney said. “Cursive handwriting, no matter how legible, is not printed.”

Bernier said she would ask the GAB at its next meeting to stop staff from determining what is and isn’t printed and to instead determine what is readable.

Mary Jo Walters, a Democrat running for lieutenant governor whose nomination papers the State Journal reviewed, also said she would attend the Tuesday meeting to complain about the law.

Under state law, candidates must collect a certain number of signatures to qualify for the ballot. Monday was the deadline to submit the signatures, and the elections agency is now reviewing them.

Previously, candidates only needed to obtain an elector’s signature and address. The new law requiring the person’s printed name in addition was adopted in late March as one of several election reforms pushed by Republicans.

Bernier said requiring a printed name on nomination papers and recall petitions will allow the public to scrutinize whether such signatures come from legitimate electors.

In 2012, when about 900,000 signatures were collected to recall Gov. Scott Walker, numerous signatures were illegible, she said. A conservative group posted the recall petitions online, and many Walker supporters were upset that it was difficult to determine the identity of all of the signers.

Walters said the new law is an effort at “voter intimidation” akin to putting the recall petitions online.

Magney said by Friday any candidate who had names stricken could file a complaint with the GAB to challenge the decision or file an affidavit from the signer to correct the illegible name. The GAB will meet Tuesday to certify candidates for the Aug. 12 primary.

The vast majority of candidates who submitted nomination forms by Monday’s deadline still had enough signatures, even after losing some in the review. But in at least two cases, including Marcia Mercedes Perkins, a Milwaukee Democrat running for governor, candidates didn’t collect any printed names on their nomination forms.

Craig Krueger, a 20-year-old college senior from Hilbert, filed 237 nomination signatures Monday. But about a half-hour before the deadline, a GAB official told him that all of his signatures were invalid and he was off the fall ballot.

Krueger, who filed to run as an independent against Rep. Paul Tittl, R-Manitowoc, said he printed out the old nomination forms without space for a printed name from the GAB website in March. The GAB issued new forms based on the new rules in April.

“I think it’s ridiculous,” Krueger said. “In any other election before this, these signatures would have been counted.”

Barry Nelson, a Manitowoc Republican running for an open state Senate seat, initially turned in 470 signatures, but after review saw the number knocked down to 369, below the 400 minimum for state Senate candidates. A GAB staff member told him many of the names were stricken because of an illegibly printed name.

“He said if they looked too squiggly that could be construed as an extra signature and not a printed name,” Nelson said. “If you can make out your name, who cares if it’s squiggly?”

Rep. Jim Ott, R-Mequon, the author of the law, said it was meant to ensure the names of people who signed those documents are legible.

Ott said he agreed with guidelines on the matter issued by the GAB in mid-April, which stated: “If the filing officer can discern no part of the printed name, it should be deemed illegible and the signature should not be counted. If the filing officer can discern a possible name, but may not be certain of the exact spelling of the name, the printed name is deemed legible and the signature may be counted if otherwise valid.”

“If they’re following their liberal guidelines, I don’t see how they could (strike so many names),” Ott said.

Ott said he hadn’t seen specific examples of names being discounted, though he was suspicious about why 17 signatures on his own nomination papers were not counted. He still had more than the 200 minimum requirement for running for Assembly.

The state is not yet ready to recommend toll roads, despite public support for them. Republicans complain about a new nominating petitions req…

Chris Rickert: Not hard to read the politics -- no matter how bad the handwriting

It turns out that poor penmanship knows no party.

The Government Accountability Board said no candidates were dismissed from fall ballots for turning in too many illegible printed names.

The office of the Government Accountability Board in Madison bustled with activity Monday as candidates running for state offices filed paperwork. Requirements now include printed names along with citizen signatures.

The Government Accountability Board is being criticized for strictly interpreting a law requiring signers of nomination papers to legibly print their names. The names circled in red were disallowed as illegible.