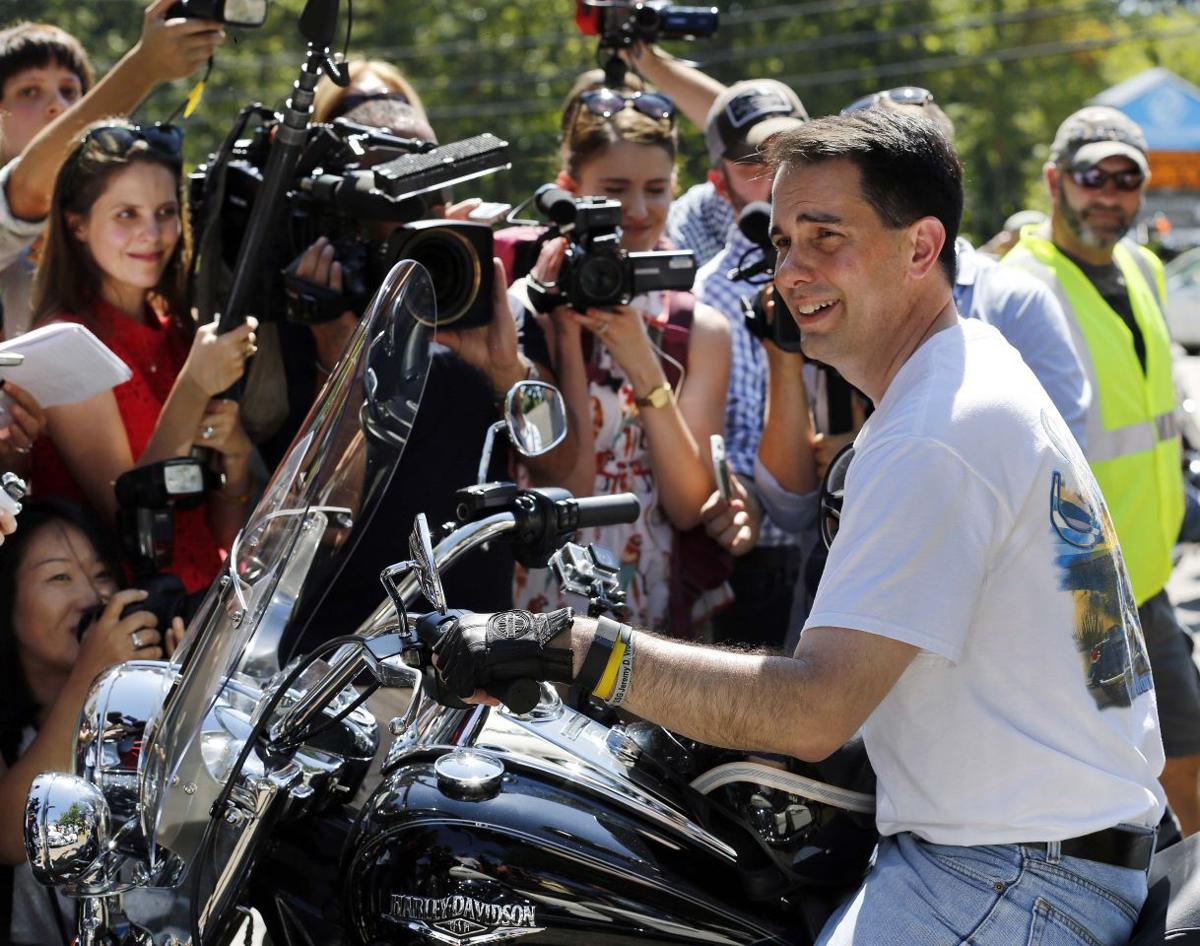 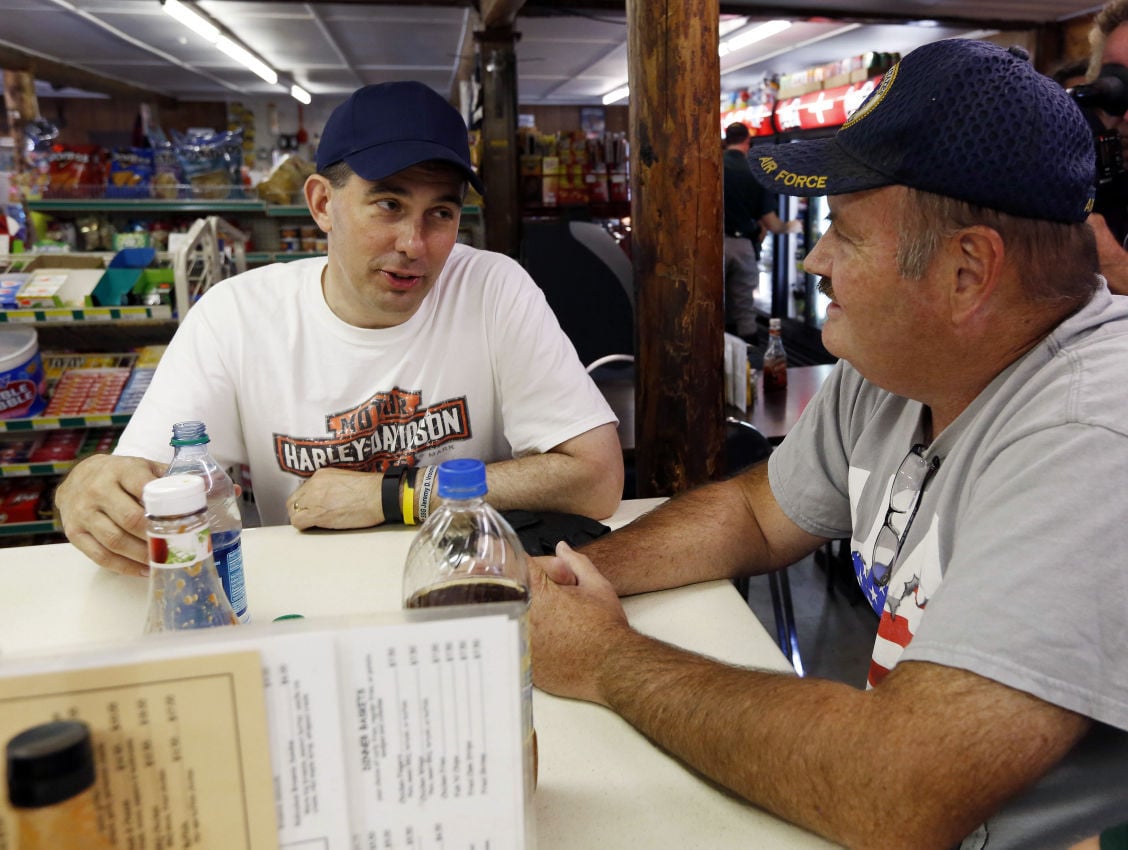 Asked by one of the hundreds of people he met on the two-day, 10-county tour in the state that hosts the first 2016 presidential primary if he thinks about politics while riding, Walker said he doesn’t. Instead, he said, he hums along, staying focused on the road ahead.

“You’ve just got to pay attention,” Walker said. “If your head is wandering, you’re going to be in the ditch. So it’s really important to stay focused.”

Lately, Walker’s campaign has found itself in a ditch. Earlier this year, he led several polls nationally, and in early nominating states. But after a lackluster debate performance, a mishmash of widely panned statements, and the rise of Donald Trump, Walker has fallen — to fourth in Iowa, eighth nationally and ninth in New Hampshire.

In small town diners and general stores in the Granite State, Walker sought to recenter himself with the one-on-one interactions that have served him well through nearly 25 years of campaigns.

Wearing blue jeans, a navy baseball hat and a Harley T-shirt, he presented a stark contrast to the brash billionaire and soft-spoken brain surgeon leading the crowded field, and the next-door neighbor appeal garnered praise from many Republicans along the route.

“For him to come to a diner with his gloves and his Harley, it just shows how down to earth he is and how much he respects people,” said Richard Littlefield, 29, of Laconia. “I’d rather have a government full of your neighbors next door. People who come up to you and make you feel like a big deal.”

Littlefield met Walker at the Route 104 Diner in New Hampton and walked away with an autographed baseball for his presidential candidate collection.

In an interview with the State Journal at the end of the trip, Walker acknowledged that he has strayed from his fundamental appeal as a conservative change agent in Wisconsin. By promising to “wreak havoc” in Washington — which he will discuss in a speech Thursday at former President Ronald Reagan’s alma mater in Illinois — he will amplify his sales pitch, tap into the public’s distaste for Washington politics and connect his record in Wisconsin to how he will “blow up the Washington machine.”

Walker tested that theme in New Hampshire, telling people as he worked his way through small crowds, answering questions ranging from nuclear weapons to monetary policy, that he plans “to wreak a little havoc on Washington.”

The motorcycle tour itself symbolized Walker’s back-to-basics approach. He did similar rides through rural Wisconsin on his way to winning three statewide elections in four years.

“For us, it’s trying to be unique, by being yourself,” he said.

In the “Live Free or Die” state, that approach may win Walker some support. But the stakes for the Feb. 9 primary are much lower for Walker than in Iowa, where not winning the Feb. 1 caucuses could sow more doubts about his chances even before New Hampshire residents show up at the polls.

Some New Hampshire campaign supporters said he could remain viable nationally by finishing in the top five in New Hampshire, provided he does better in Iowa and South Carolina.

Walker dismissed questions about his sagging poll numbers, comparing reporters who fixate on them to novice skeet shooters who aim for where the clay pigeon is, rather than where it will be.

“You can write process stories all day long, but in the end all it will mean is you write a story in four or five months to talk about where did the comeback come from,” Walker said. “The comeback came because we focused all on the policy and what it takes to move this country forward.”

The motorcycle tour covered more than 300 miles past forested mountain lakes, little white churches and century-old corner stores. As he set out from a VFW post in Milford accompanied by about 30 riders, including two state patrol escorts, Walker said motorcycles are “all about freedom.”

Half of the stops were in remote towns where Walker was the first candidate this campaign cycle to visit. At the General Store in Washington, a town of about 1,150 people, Walker was welcomed by local postal carrier Guy Eaton, who read a poem he had written the previous night.

“Today we welcome Wisconsin Gov. Scott Walker. We hope he’s a doer and not just a talker,” Eaton read aloud. Walker thanked him, saying, “This is the kind of Washington I like. … A Washington filled by a little bit of reality.”

The riders were mostly older men, such as Gary Gahan, 70, a retired financial planner from Merrimack, and Bob Letourneau, 72, a former state senator who works for the state Department of Safety. But a few women joined, including Nancy Frye, 51, a bookkeeper and belly dancer who floated the idea for the ride to Walker in April when she met him at a candidate forum in Nashua.

Frye assessed the state of the race like many others interviewed along the way: It’s so early in the process that many voters don’t know who the candidates are.

“Trump’s leading because he’s saying it like it is, and a lot of people are longing for that,” Frye said. “Scott says it like it is as well, but in a more polite manner.”

Andrew Smith, a political science professor and director of the University of New Hampshire Survey Center, agreed that it’s early. In 2012, he said, exit polls showed 45 percent of primary voters made up their minds in the final three days before the election.

Ohio Gov. John Kasich has surged to second in New Hampshire, but unlike Walker has already started advertising there. Walker’s Super PAC is planning a $16 million ad buy in Iowa, New Hampshire, South Carolina and Nevada beginning this week.

Smith also noted that motorcycle enthusiasts in New Hampshire tend to be the more libertarian, blue-collar Republican crowd, so Walker getting out and riding with them “could help build some credibility with these people.”

Motorcycles have a broader appeal in New Hampshire than in most states. The latest federal data show the state ranks second in motorcycles per capita, just ahead of Iowa and Wisconsin. (South Dakota is first.)

“As a publicity stunt, I think it’s actually a pretty clever way of doing it,” said Christopher Galdieri, an assistant political science professor at St. Anselm College in Manchester, New Hampshire. “It’s the kind of thing that can get people to perk up and take notice.”

At the Kimball Farm ice cream stand in Jaffrey, New Hampshire, Steven and Suzanne Pascoe, a pilot and teacher from Amherst who were leaning toward supporting former Florida Gov. Jeb Bush, said they hadn’t heard much about Walker. But decked in Harley-Davidson caps and T-shirts, they were impressed that Walker is a fellow motorcycle enthusiast.

“It makes us feel better than Trump coming in on his helicopter,” Suzanne Pascoe said.

Walker had his New Hampshire tour stops to himself all weekend, while several other candidates appeared at a popular Labor Day parade in Milford. But at the final stop at the Salem Republican Committee Labor Day Picnic, he was the last of four candidates to speak on a day when the thermometer hit 90 degrees.

“If you elect me your next president, I will not back down any day, any how, any way,” Walker said. “It’s time we put someone in who’s been tested. I’ve been tested more than anyone in this race.”

Tom Linehan, 68, a retired software engineer from Salem who includes Walker in his top four, said as he watched the speech, he thought to himself, “I hope he does that during (next week’s) debate.”

Republican candidates are scheduled to debate again Sept. 16 in California, and Walker acknowledges he needs a better performance.

In the State Journal interview, Walker said part of his strategy going forward will include refocusing his message on his battle with public sector unions and his 2012 recall victory. Many voters he meets across the country wrote campaign checks then and feel vested for that reason, he said.

“The biggest thing is: Don’t get sucked away from what people are drawn to in the first place,” Walker said. “We talked about this early in the campaign and then we moved on, thinking people heard about it. What we realized is people want to hear more.

“It’s kind of like, Why did you like a rock group? Because they played a good guitar. Well don’t stop playing the guitar then.”

The criticism comes as the governor prepares for the second GOP debate and combats plummeting poll numbers.

On the Capitol: New poll shows Scott Walker 'way behind in the pack' in Iowa

Gov. Scott Walker heads this weekend to Iowa -- the place that catapulted him to contender status in the 2016 presidential race -- to salvage …

Scott Walker staying the course despite drop in poll position

The 2016 presidential candidate has fallen from a 10-point lead in New Hampshire in April to ninth place in latest poll.

The GOP candidate touted his Midwestern roots, but also was confronted about his views on immigration.

Campaign says governor isn't advocating for a northern wall after he told NBC's Chuck Todd it was a "legitimate issue."

Walker is calling for U.S. forces in Iraq to engage in direct combat to defeat "radical Islamic terrorists" in the Middle East.