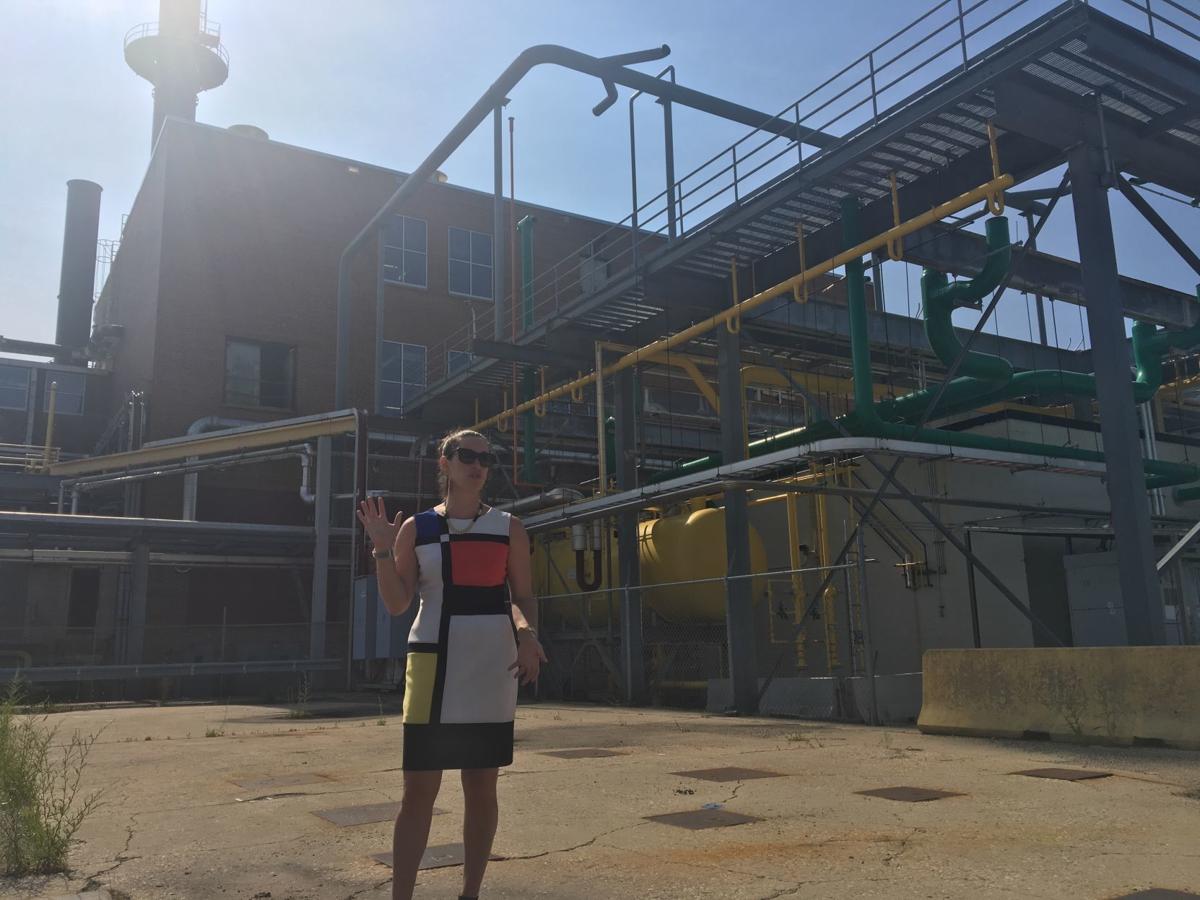 Orlee Rabin, one of the principals for the development team working on the former Oscar Mayer site in Madison, describes the upgrades to gas, electrical, heating, water and sewer systems that must be done to make the site usable again. 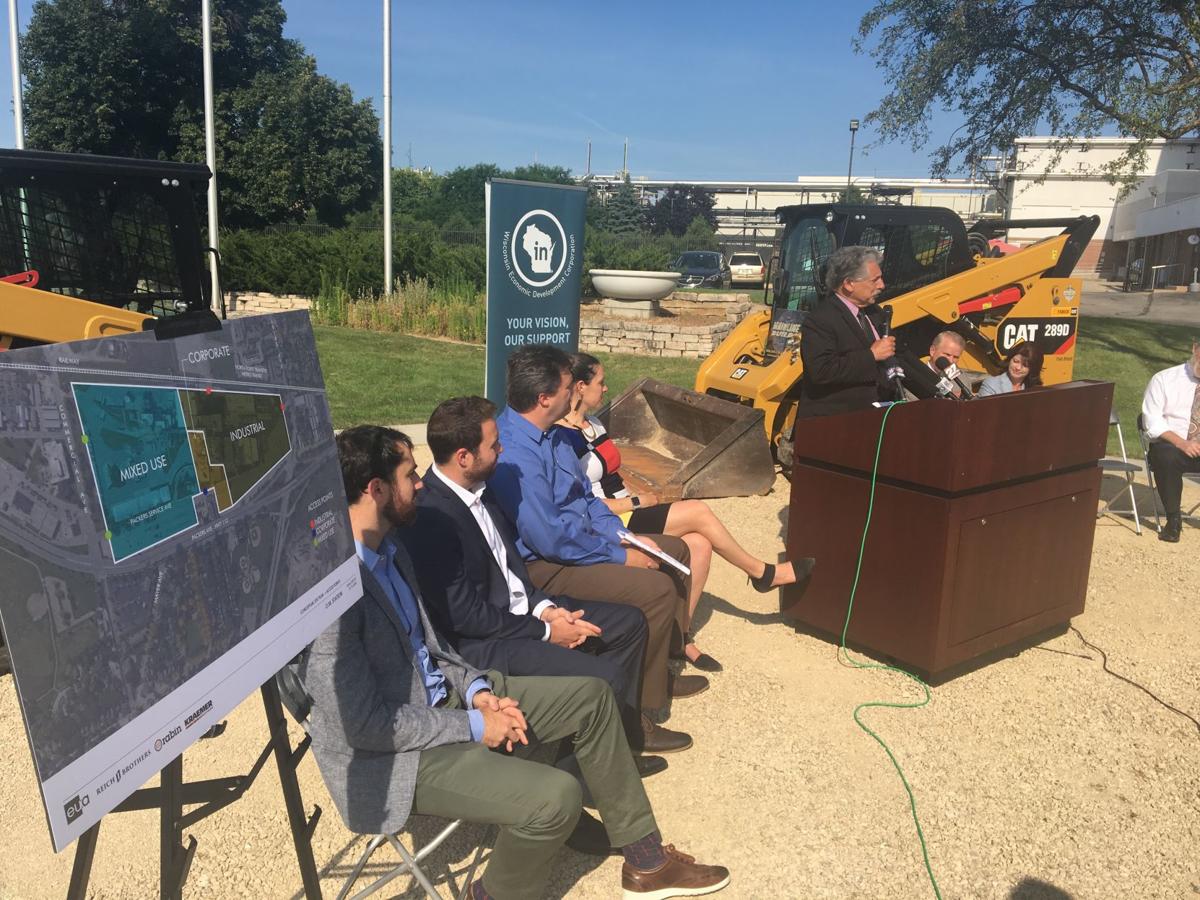 Mayor Paul Soglin tells reporters the cooperation between the state, city and developer is accelerating the success of the former Oscar Mayer plant redevelopment. In the foreground a site map shows how the developer plans to divide the 67-acre site between mixed-use, corporate and industrial elements. 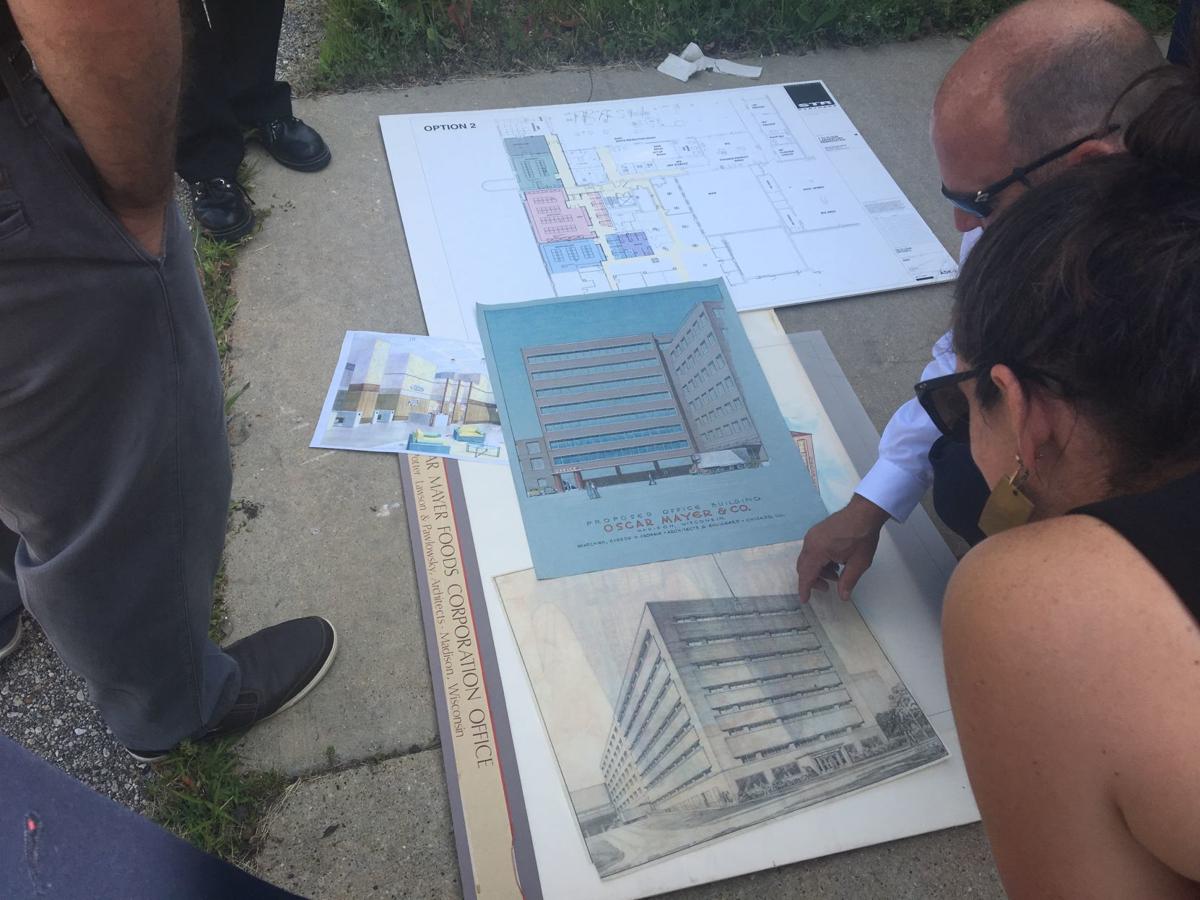 Developers working on the former Oscar Mayer plant look at old architectural sketches of the nine-story office building they plan to lease to multiple tenants. They hope to have 60 to 70 percent of the building leased by next year.

Brewpubs and data centers. Entertainment venues and tech incubators. A hotel and a distribution warehouse.

That mix of commercial and industrial uses is the vision for the new “OM Station,” the renamed 72-acre site of the former Oscar Mayer meat-packing plant in the heart of Madison’s East Side.

City and state officials, along with developers, talked up the many possibilities for the site Wednesday, offering the most concrete plans yet about the overhaul of the long-time industrial site.

But first, the developer must complete a more than $18 million infrastructure improvement project, which on Wednesday received a $500,000 boost from the Wisconsin Economic Development Corp.

Representatives from the developer led a site tour Wednesday showcasing about 700,000 square feet of existing building space they hope to have 60 to 70 percent occupied by this time next year with some of those industrial and corporate tenants.

Last month the first tenant, Total Administrative Services Corp., moved into the nine-story office building, which is expected to remain a hub for corporate offices.

The developer, 910 Mayer LLC, plans to divide the rest of the site between a mixed-use redevelopment on the south end and a variety of industrial operations reusing many of the existing buildings on the north end. But rather than serving one company the entire campus will be broken into sub-communities.

“While Oscar Mayer was great, it was one company employing 5,000 people,” said Ald. Larry Palm, who represents the area and is part of a city committee advising the developer. “What I would like is 500 companies each employing 10 employees, so there is a multitude of constructs in the building.”

Though the former Oscar Mayer headquarters employed several thousand employees in the 1970s, the 100-year-old plant was down to 1,300 employees by 2013. The last boxes of meat products slid off the conveyor belt in June 2017.

Mayor Paul Soglin said the state and city working together with the developer “is going to make a big difference in accelerating the success of the site.” Two years ago he slammed the state’s economic development agency for not acting more swiftly to engage Kraft Heinz about the possibility of keeping the Oscar Mayer plant open.

The infrastructure project is currently underway with the developer hoping to complete $1.8 million in gas and electric upgrades by the end of the summer. Water, fire and sewer upgrades and then HVAC improvements are planned next, pushing the project close to $20 million by the time it’s all completed in 2025. Many of the improvements can be completed as each new company moves into the space.

The mixed-use redevelopment and new construction doesn’t have a timeline or price tag yet, but a site plan could be finalized by the end of the year, project manager Nate Ellis said.

The infrastructure upgrades are needed first because Oscar Mayer had consolidated many of those components in ways that won’t serve a plethora of new individual tenants. For example, much of the site lacks necessary plumbing hookups for bathrooms because workers at the Oscar Mayer facility used a centralized locker room.

Some of the unusual infrastructure configurations could also entice a potential industrial user who would want to tap into the huge water and electrical inputs tailored to Oscar Mayer’s food-processing operation. The cold storage space could be repurposed to house a computer server farm.

Ellis said when the upgrades are completed the property will be valued at more than $30 million, more than double its current value. He likened the project to the Capital Commerce Center in Sacramento, California, a 400,000-square-foot former Campbell’s soup factory that now employs 375 people in a variety of businesses.

The Wisconsin Economic Development Corp. provided the city with a $500,000 idle site grant for the project, one of four it gave to projects in 2018, including one for demolition of the former General Motors plant in Janesville. The program began in 2013 and has provided $15 million to economic development projects around the state, including $534,000 to the Royster Corners redevelopment on the East Side and $500,000 to the Garver Feed Mill project.

Ellis said 910 Mayer LLC, made up of Reich Brothers Holdings and Rabin Worldwide, plans to apply for an additional idle site grant from WEDC. There are also ongoing discussions with the city of Madison about a tax incremental financing component for the mixed-use redevelopment.

Lt. Gov. Rebecca Kleefisch, who participated in the tour Wednesday, declined to say whether the state should kick in more taxpayer assistance.

She said the half-million dollar grant was a “significant contribution” to the project, which comes in the wake of what she called a “huge disappointment” when Oscar Mayer parent company Kraft Heinz announced in 2015 it was shutting down the iconic Madison facility.

“This one is more of a phoenix story,” Kleefisch said. “Today we are hopeful. Today the phoenix rises from the ashes of disappointment.”

"This will truly be a mixed-use location," said Nate Ellis of Rabin Worldwide.

Gov. Scott Walker recommended 120 census tracts, including those around the shuttered Oscar Mayer plant, to be eligible for new economic development tax breaks.

The Madison mayor is calling for a legislative investigation into why the state's job-retention agency didn't contact company.

Mandela Barnes of Milwaukee and Kurt Kober of Sheboygan are running for the Democratic nomination for lieutenant governor in the Aug. 14 primary.

A recently completed report offers a broad vision of the former meat packaging plant and surrounding area while a more detailed study is planned for next year.

Orlee Rabin, one of the principals for the development team working on the former Oscar Mayer site in Madison, describes the upgrades to gas, electrical, heating, water and sewer systems that must be done to make the site usable again.

Mayor Paul Soglin tells reporters the cooperation between the state, city and developer is accelerating the success of the former Oscar Mayer plant redevelopment. In the foreground a site map shows how the developer plans to divide the 67-acre site between mixed-use, corporate and industrial elements.

Developers working on the former Oscar Mayer plant look at old architectural sketches of the nine-story office building they plan to lease to multiple tenants. They hope to have 60 to 70 percent of the building leased by next year.