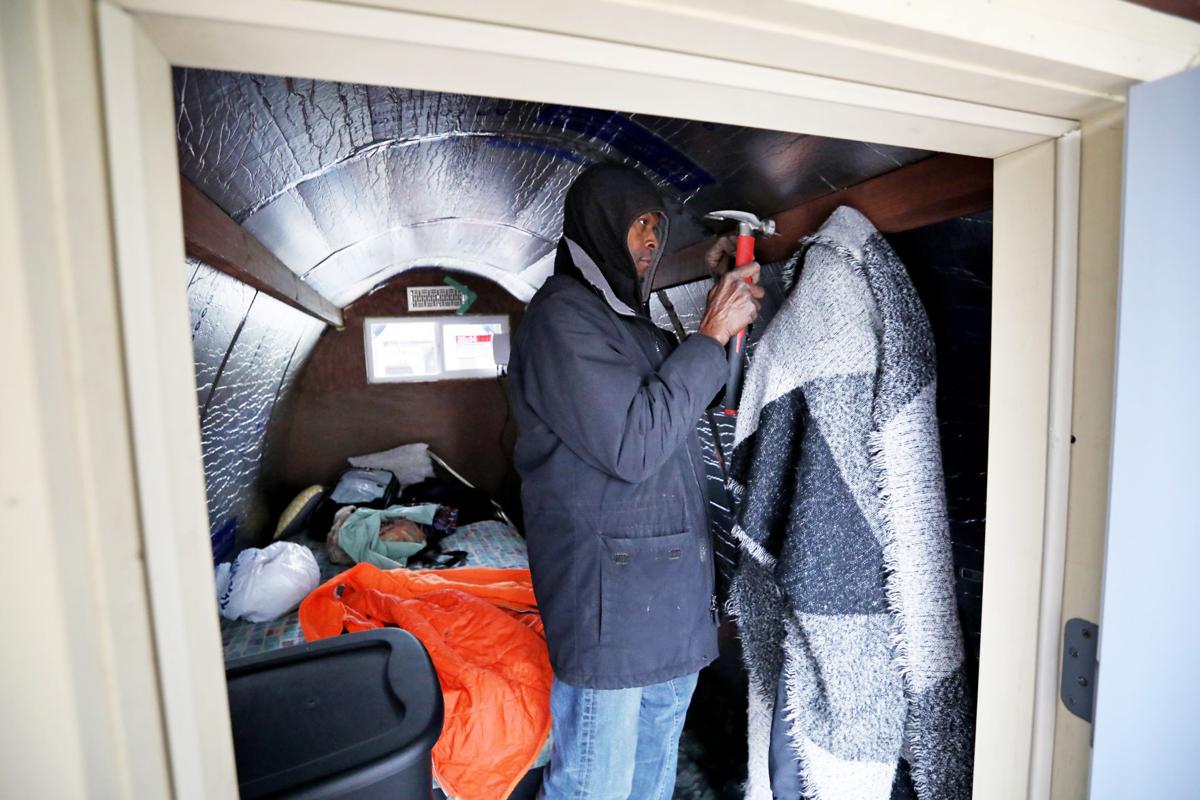 Willie Lyons hammers a nail into a board to use as a coat hook at the entrance to his new tiny hut at an Occupy Madison tiny house village. Lyons is the first to move into the village, at the former Wiggie's Bar property at 1901 Aberg Ave. on the East Side, that will eventually hold 28 huts. 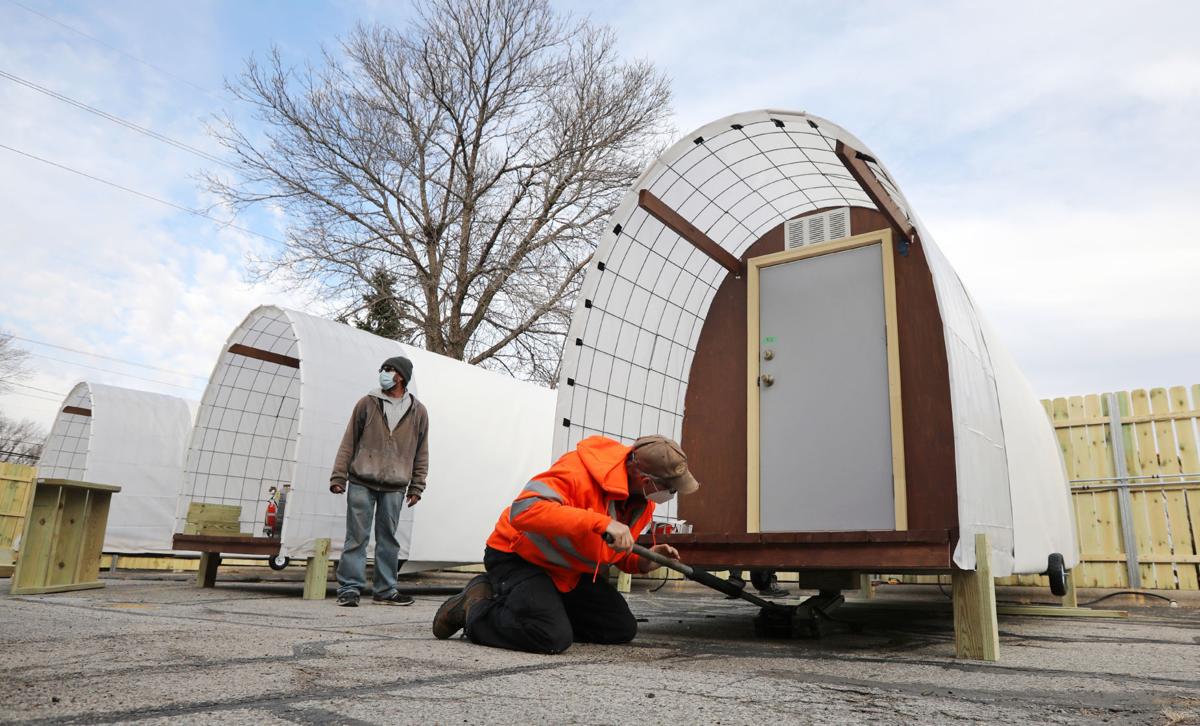 Conestoga-style huts are placed and leveled in preparation for occupants to move in at the new Occupy Madison tiny house village. 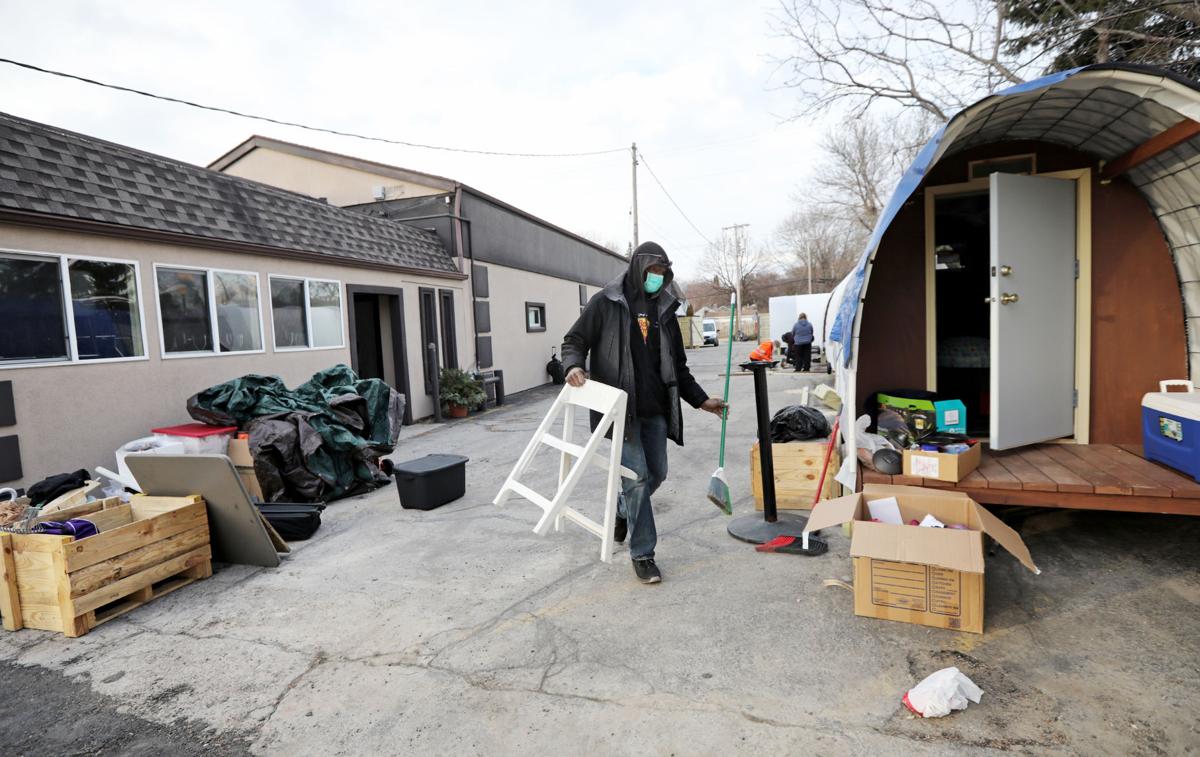 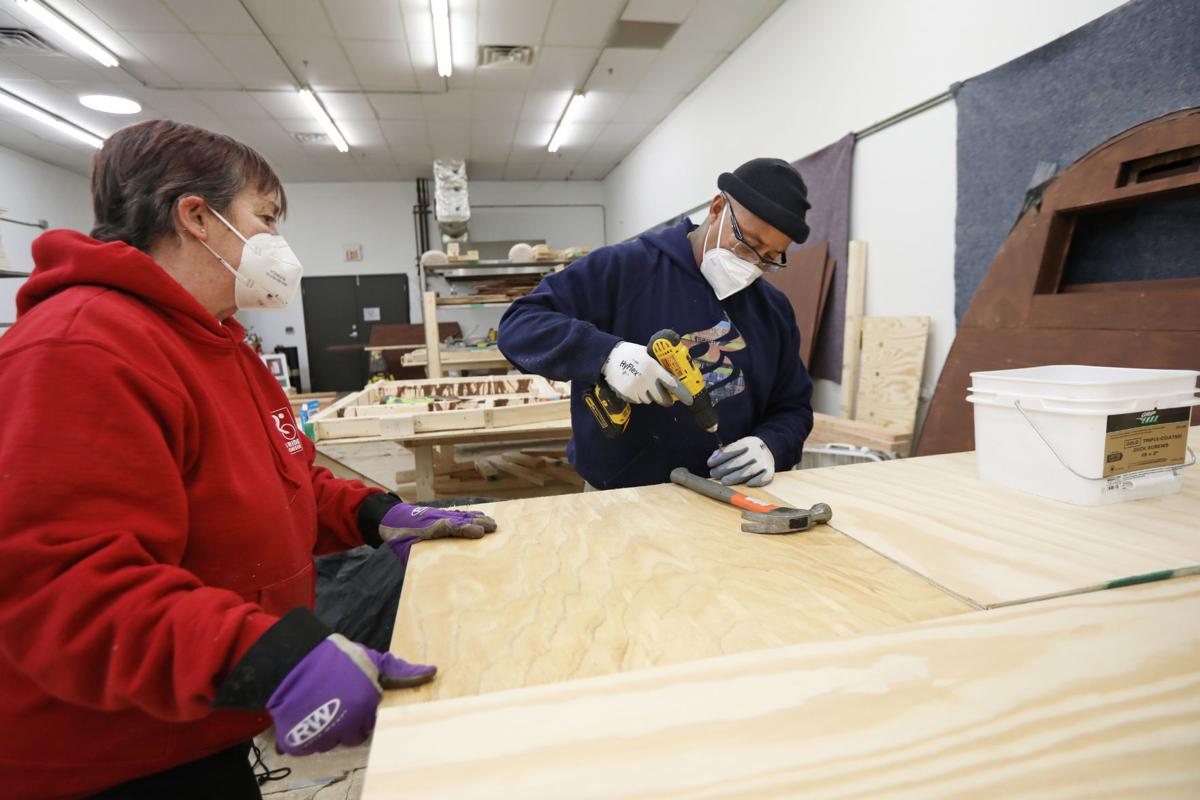 Occupy Madison volunteers Migel Rudd and his wife, Kristin Mathews, left, work on the flooring of a tiny hut at a workspace on the Near East Side provided for $1 by Common Wealth Development. 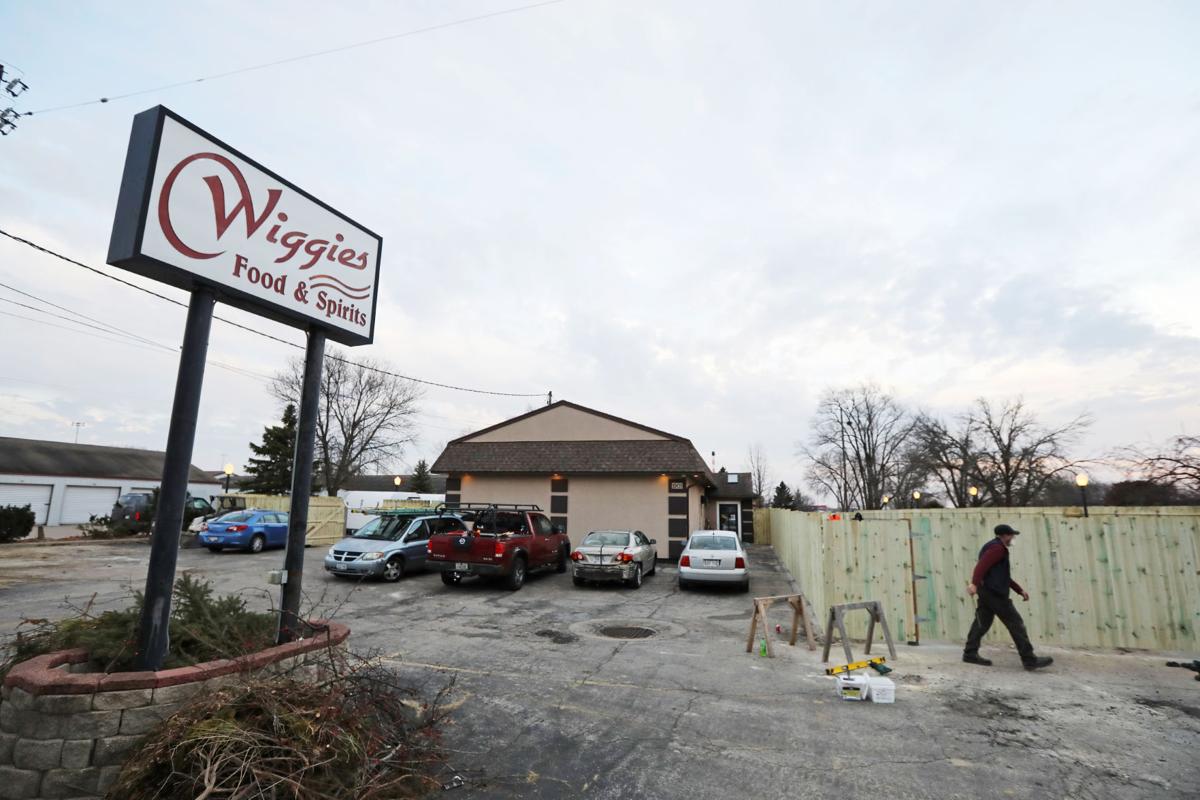 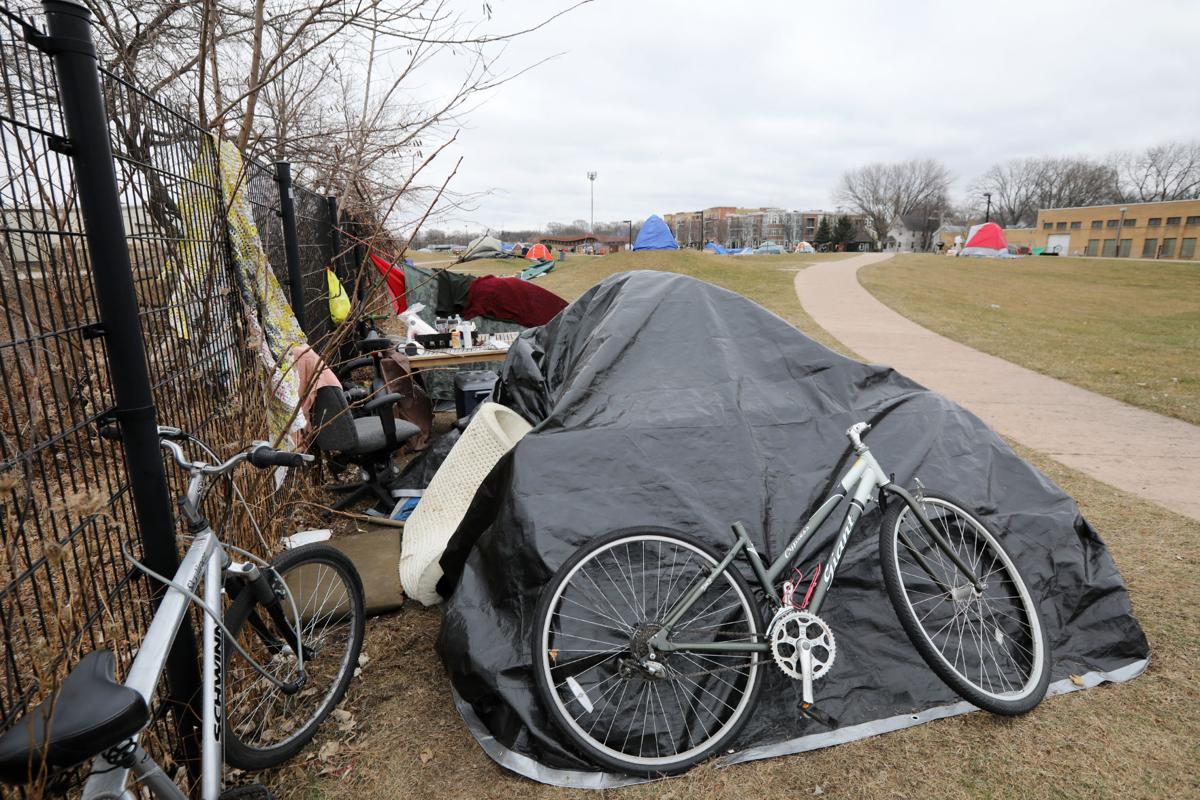 The homeless encampment at McPike Park on the Near East Side. Most of the homeless moving to tiny huts at Occupy Madison's new tiny house village on the East Side will relocate from the encampment. Many others are living in cars, shelter or on the streets.

As the sun began its afternoon fade, Willie Lyons stepped inside his new Conestoga-style hut, pounded a nail into a beam and hung a coat inside the tiny shelter made by volunteers that will protect him from the elements this winter.

Lyons, who is deaf, spent much of Saturday methodically moving his belongings from boxes and bags to become the first homeless person to move into a community of what will be 28 tiny huts that nonprofit Occupy Madison is building and placing at the former Wiggie’s Bar property at 1901 Aberg Ave. on the East Side.

As Lyons continued his move — laying bedding atop a raised wooden frame, setting up a light, table, and heater, storing clothing and food, and placing a small plastic chair on his tiny porch — volunteers used a jack and group muscle to set huts into spots near electrical hookups or did other tasks.

The Wiggie’s building, plastic still covering the bar, tables and chairs, is already an oasis and being renovated to offer restrooms, showers, washers and dryers, kitchen and dining area. Residents will decide future uses, such as a craft workshop and store, and/or a coffee or ice cream shop to make money to cover operating costs.

The construction space is near McPike Park, where Lyons, an Oklahoma City native who came to Madison in 2005 and has been homeless for five years, had been living in a tent in the city’s largest homeless encampment. Most people relocating to Occupy Madison’s tiny hut village will come from the McPike Park tent encampment. Others are sleeping in cars, shelters or the streets.

“It’s a miracle,” Occupy Madison co-president Brenda Konkel said. “This project has moved at lightning speed because over 1,000 people in the community have come together to volunteer to build houses, donate and help the project in so many ways. The city, county, and community members have worked in unprecedented ways to make this amazing thing happen in just three months.”

The effort is a more ambitious echo of Occupy Madison’s original tiny house village on a small parcel that once held an auto repair shop at 304 N. Third St. on the East Side.

The original village has five, 98-square-foot, permanent tiny houses costing $7,000 apiece, with privacy fence, landscaping, and the repair shop converted to a common area with restrooms, showers, makeshift kitchen, workshop and a store selling hand-crafted items made by residents. There is a greenhouse and large, raised-bed gardens.

Now, Occupy Madison is using emergency permission from the city to place the 28 smaller huts costing $2,000 apiece at the Wiggie’s site.

To get a house or hut, residents must put in sweat equity completing them, help run the village store or complete other activities, and follow rules. More than 50 people have expressed interest in a hut and many have attended orientation and become members of Occupy Madison, Konkel said.

“Its imperative that we get people in a place where they can be safe and warm for the winter, where they will be welcomed and supported by the community, where they can have basics like running water, heat, a place to go to the bathroom,” she said.

Eventually, the nonprofit hopes to relocate the huts to another spot and gain city approval to place 15 to 20 of the larger, more substantial, tiny homes at the Wiggie’s property next year.

Occupy Madison built its first tiny hut at the original tiny house village property, but moved indoors to the space at 931 E. Main St. in late October. On Saturday, Barret and three volunteers were completing bases — large wooden frames stuffed with insulation topped with plastic and flooring. The pieces are assembled in a loading dock area and the huts hauled to the village.

The Wiggie’s site is now screened by a 6-foot-tall privacy fence, and behind it, huts are being neatly placed along the fence in the parking lot in a semi-circle around the former bar building.

Architect Edward Kuharski, an Occupy Madison member, has reimagined the building interior, keeping the restrooms but repurposing space for a laundry room with four washers and four dryers, eight showers, a kitchen, dining area, craft workshop, and office for residents, and a commercial kitchen and space for a coming public use.

“We’re lucky to have this building come to us,” Kuharski said.

On Dec. 17, the Dane County Board will consider a resolution to deliver $200,000 to support the effort, while Occupy Madison is looking to raise another $400,000. The combined funds would allow the nonprofit to own both properties without a mortgage and pay for all houses, huts and renovations.

The nonprofit must still raise $80,000 annually for operations at the two properties.

“Hopefully, this will be accomplished through the woodworking shop and crafts we sell in our store at 304 N. Third St. and whatever use we use the common area for at 1901 Aberg Ave.” Konkel said.

Occupy Madison must go through a full city land use review to locate permanent tiny houses at the Wiggie’s site and move forward with public uses.

In from the cold

Before Saturday, Maleyk and Cherokee Mason, just 24 years old and married in early 2019, had been sleeping outside on Capitol Square, in a tent at McPike Park, and in a 2004 Pontiac Bonneville.

Both arrived in Madison in 2015 — he had fled Chicago’s South Side for a better life, and she left Columbus after her dad was incarcerated — and by chance met at the top of State Street two years later. They’ve had housing but have been homeless for about eight months.

“In the winter, it’s cold,” Cherokee Mason said. “A lot of time you get moved from doorways. When you wake up with snow on your face, it’s not fun. I’ve been attacked. I have to defend myself when he’s not around. I still have a fear of being attacked.”

The couple, she a former heroin addict now clean for three years and he with a poor credit history, have struggled to secure housing — until connecting with Occupy Madison.

“I just like that Occupy Madison is about community,” she said.

Evictions loom as rental assistance gets spent and moratoriums uncertain

The couple began their move into side-by-side huts on Saturday evening, spent the night there with their dog, cat and two lizards, and completed the move on Sunday. While living at the village, they hope to become debt-free, repair and rebuild credit, and get to a point of self-sufficiency, Cherokee Mason said.

“Last night, I felt relieved,” she said Sunday. “The tiny houses feel warm and like home. I finally did it. I’m here.”

"This is the safer way to quarantine if you really think about it," one homeless camper said.

A storm system could wallop southern Wisconsin with the first significant snow of the season Friday night into Saturday, or it might deliver nothing, according to forecasters.

The partners are moving to spend $2.6 million for the building, formerly Savers and Gander Mountain stores, at 2002 Zeier Road.

An aggressive outreach effort has helped the homeless camping at McPike Park on the Near East Side and others living outdoors find shelter in the frigid weather, officials said.

Some Dane County Board members hope to spend $7 million on long-term housing solutions, but County Executive Joe Parisi says the money needs to be put elsewhere.

Willie Lyons hammers a nail into a board to use as a coat hook at the entrance to his new tiny hut at an Occupy Madison tiny house village. Lyons is the first to move into the village, at the former Wiggie's Bar property at 1901 Aberg Ave. on the East Side, that will eventually hold 28 huts.

Conestoga-style huts are placed and leveled in preparation for occupants to move in at the new Occupy Madison tiny house village.

Occupy Madison volunteers Migel Rudd and his wife, Kristin Mathews, left, work on the flooring of a tiny hut at a workspace on the Near East Side provided for $1 by Common Wealth Development.

The homeless encampment at McPike Park on the Near East Side. Most of the homeless moving to tiny huts at Occupy Madison's new tiny house village on the East Side will relocate from the encampment. Many others are living in cars, shelter or on the streets.