On Oct. 31, 2022, the city of Madison will suddenly gain about 5,000 residents, 1,400 parcels, facilities and public infrastructure after the town of Madison is formally dissolved. A smaller number of residents and property will be assigned to Fitchburg.

The biggest challenge: paying for the millions — perhaps tens of millions — of dollars in public infrastructure improvements to bring what is effectively a rural area up to city standards and invest in targeted projects. The new parts of the city eventually will require curbs, gutters, sewers and parks, and the city will take over plowing and trash pickup.

Madison also has higher taxes and tighter rules for building inspection, which could mean higher expenses for town property owners. Special assessments to help cover the cost of new infrastructure may also create burdens. Those increases come just as developers are pouring money into new projects on the city’s South Side, fueling concerns about gentrification and displacement.

As the reality of the merger looms, the city is exploring a novel approach to financing the improvements. It would use proceeds from existing, flush tax incremental financing (TIF) districts in other parts of the city to help bring town infrastructure to city standards, help underwrite development and create more low-cost housing.

The goal, city officials say, is to keep the South Side affordable to residents and existing businesses.

“This isn’t the normal way of doing this,” said Dan Rolfs, the city’s community development project manager. “But this isn’t a normal situation.”

With TIF, the city and other taxing jurisdictions agree to freeze property taxes in an area and devote new tax revenue from growth to public infrastructure or investments in private development. The city usually borrows to make the investments and uses the the new tax revenue to repay the loans.

When projects are completed and the loans repaid, the districts are closed and the full, higher tax revenues begin flowing to the taxing entities, which include the city, Madison School District, Dane County and Madison Area Technical College. The city usually closes TIF districts in about 11 or 12 years, but state law allows them to remain open for 27 years.

Diverting money from healthy TIFs would require leaving those districts open longer, meaning the taxing jurisdictions would wait perhaps four or five more years for the higher tax revenues to flow back to them.

While no decisions have been made about the use of such “donor TIFs,” other taxing entities are watching closely.

“Really, it will come down to how much money they are talking about and how much tax base will have to remain tied up in the donor TIF areas to support the city’s infrastructure responsibilities,” said county chief financial officer and comptroller Chuck Hicklin.

Before the city can address the challenges, it needs to understand their scale and scope, city officials said.

Rhodes-Conway has asked all city agencies to analyze how absorbing the town will affect their capital and operating budgets. It’s too early to know the exact cost, but it will be “significant,” the mayor said.

The town, for example, has no requirement for curbs, gutters and sidewalks for its 14.3 miles of roads, although some roads do have those improvements. The city has long provided the town with public water, but an area just west of the Town Hall is served by a cooperative that owns its own small water system, and about 50 homes in the arboretum still use wells and septic systems.

“It will take a few months to determine what work will need to be undertaken because there is a fair amount of information to go through and there are a number of city agencies and services impacted,” Mohelnitzky said. “We’re in the process of putting together a communication plan, and are eager to connect with the incoming residents in the attachment process.”

The city’s Department of Planning, Community and Economic Development is looking at other facets of the attachment, including the impact on residents, existing businesses, the potential for acquiring land so the city can influence what sort of development occurs, and opportunities to keep and create lower-cost housing, said Matt Mikolajewski, city economic development director.

“We are being very deliberative,” Mikolajewski said, adding that the city intends to have a comprehensive inventory and a budget for addressing needs without forcing some of the area’s lower-income residents out.

The Madison School District is especially concerned about gentrification because it’s important to keep families and students in their homes, School Board member Cris Carusi said.

The district, she said, supports addressing infrastructure needs as well as ensuring stable, affordable housing, and is interested in the city’s TIF approach, but “the devil is in the details,” she said.

Meanwhile, the city is updating a big chunk of its 2005 South Madison Neighborhood Plan, bounded by Fish Hatchery Road, Wingra Drive, Lake Monona, the Beltline and East Badger Road — but not the Alliant Energy Center properties. The city will use the updated plan to guide land purchases and redevelopment, Mikolajewski said.

TIF is perhaps a city’s most potent financing tool, but it’s not the only one. The city also has its Affordable Housing Fund, grants to improve business facades, programs to promote home ownership and business stability, tax credits through the Wisconsin Housing and Economic Development Authority, and multiple federal funding channels.

Although most of the city’s TIF districts are successful — some wildly so — a few are hampered by lack of private investment and poor property value growth, city TIF coordinator Joe Gromacki said. Sometimes, TIF revitalization efforts that use borrowing don’t work as planned, and districts must stay open far longer than planned or be subsidized by other districts to meet obligations, he said.

District No. 27 in the West Broadway area on the South Side took 21 years to pay off its loans, nearly double the usual time for a TIF district in Madison. The city needed to use revenues from healthy donor districts to help repay costs in District No. 38 in the South Park Street, Badger Road, Ann and Park Street area, and in District No. 40 on the North Side.

With the challenge of absorbing much of the town now looming, city staff are offering a two-stage plan to use healthy TIF districts to donate funds to South Madison and be proactive while, at the same time, reducing the need to borrow up front and avoid risks of sluggish property value growth.

“TIF was invented to do this kind of stuff,” Gromacki said. “It was created to deal with urban blight.”

A plan in two phases

Under state law, the city can’t create a TIF district in another municipality so it must wait to create the new district until the town is formally attached in 2022. That’s why the plan has two phases.

The first phase of the proposed plan, which would run from 2020 through 2024, would donate a portion of excess tax revenue from healthy TIF district No. 39 in the Stoughton Road area to the city’s TIF district No. 42, which runs from the intersection of Fish Hatchery Road and Park Street to the Wingra Creek area near town properties. Poor-performing district No. 38 would be closed.

“It allows us the ability to do some small things now before the town dissolves,” Rolfs said.

The second phase, which would start in 2023, could donate a portion of tax revenues from districts 36 on the East Washington Avenue corridor, 37 around Union Corners on the East Side, or 42 to the new TIF district in South Madison.

“If we can jump-start a TIF district so we can invest in these neighborhoods sooner, that’s really interesting,” Rhodes-Conway said.

If the approach isn’t used, the city would have to borrow money to make improvements and hope the new district sees enough growth to repay investments.

“I think it is crucial that we prioritize engaging residents, collaborating with our community partners, and thinking creatively about how to make sure that South Madison thrives,” the mayor said.

Although Madison has many financial strengths, expenses and loss of revenue are expected slash the city's "rainy day fund" by 30%, or $16 million, down to $36 million by the end of 2020, the city's Finance Department says.

Madison may lease care facility for COVID-19 response, buy other site for development

Madison may soon lease a big, vacant, former skilled nursing facility on the East Side as a possible temporary shelter in response to COVID-19 pandemic, and could buy a building and property on the South Side for future redevelopment.

The City Council is deciding how to respond to a report that says the city's government structure is "fundamentally unfair" to many residents. 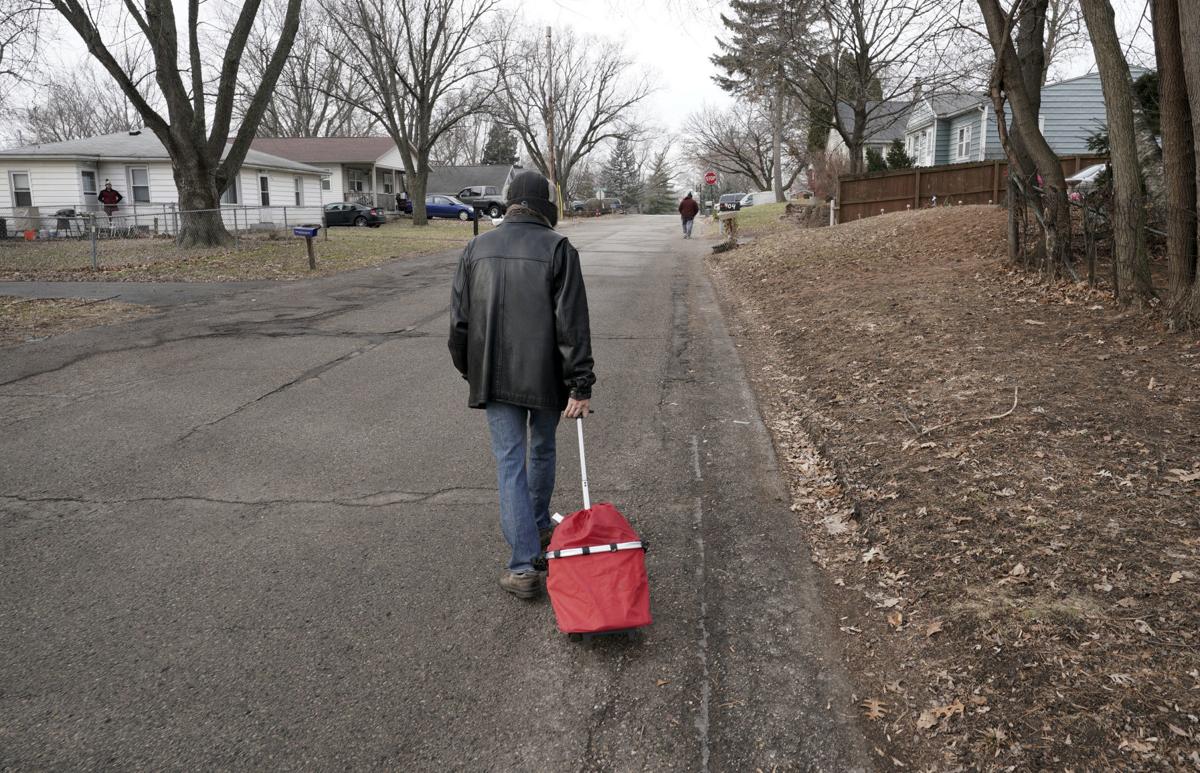 Among the improvements needed in areas of the town of Madison, which will be absorbed by the city of Madison in 2022, will be curbs, gutters and sidewalks along all of its 14.3 miles of roads. The city is considering directing money from tax incremental financing districts elsewhere to help cover those costs. 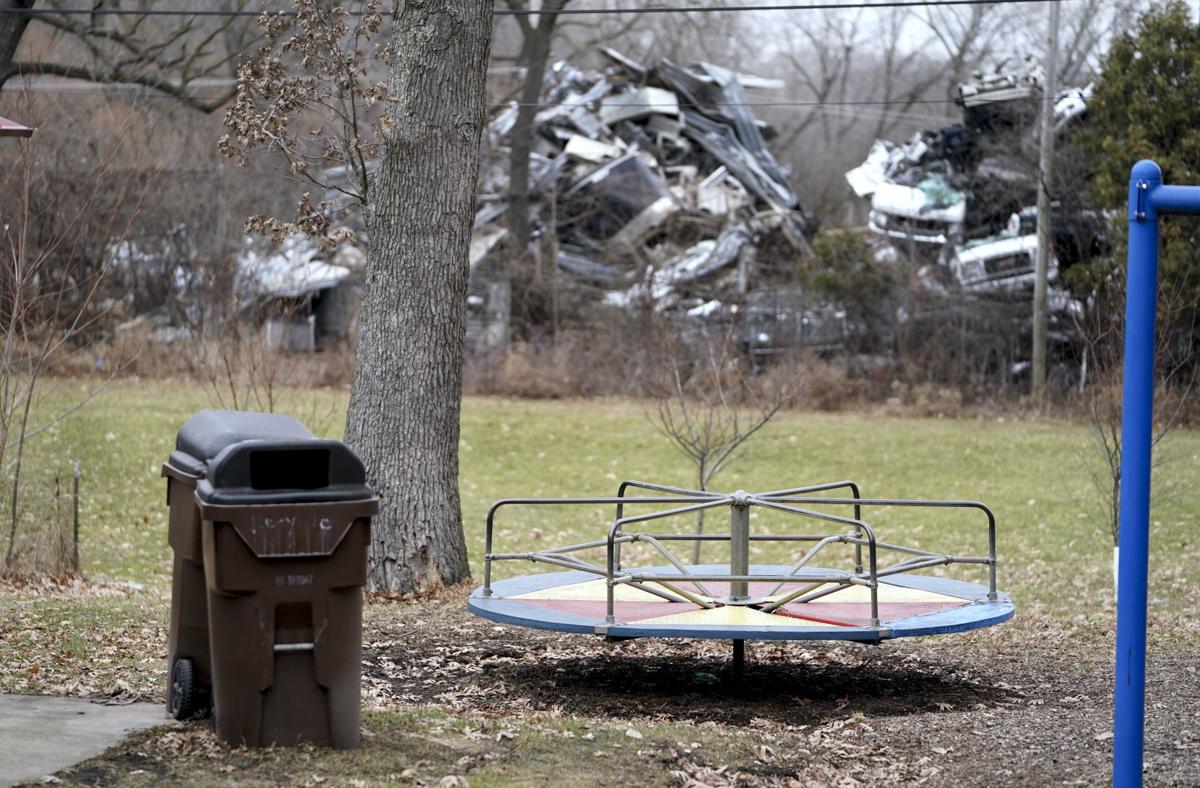 A salvage yard abuts Heifetz Park in the town of Madison. Such areas will have to meet city code when they're annexed in two years. 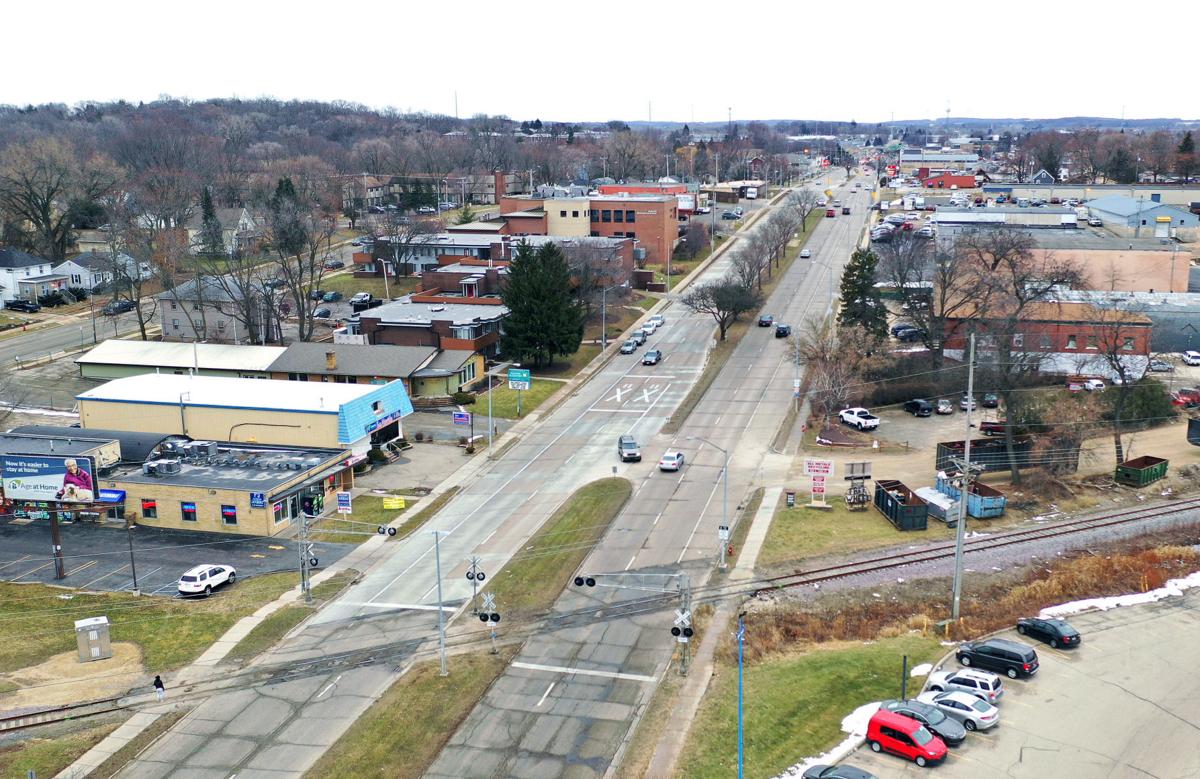 The stretch of South Park Street from Wingra Creek to the Beltline would likely be included in any new tax incremental financing district to be created after the town of Madison dissolves in 2022. 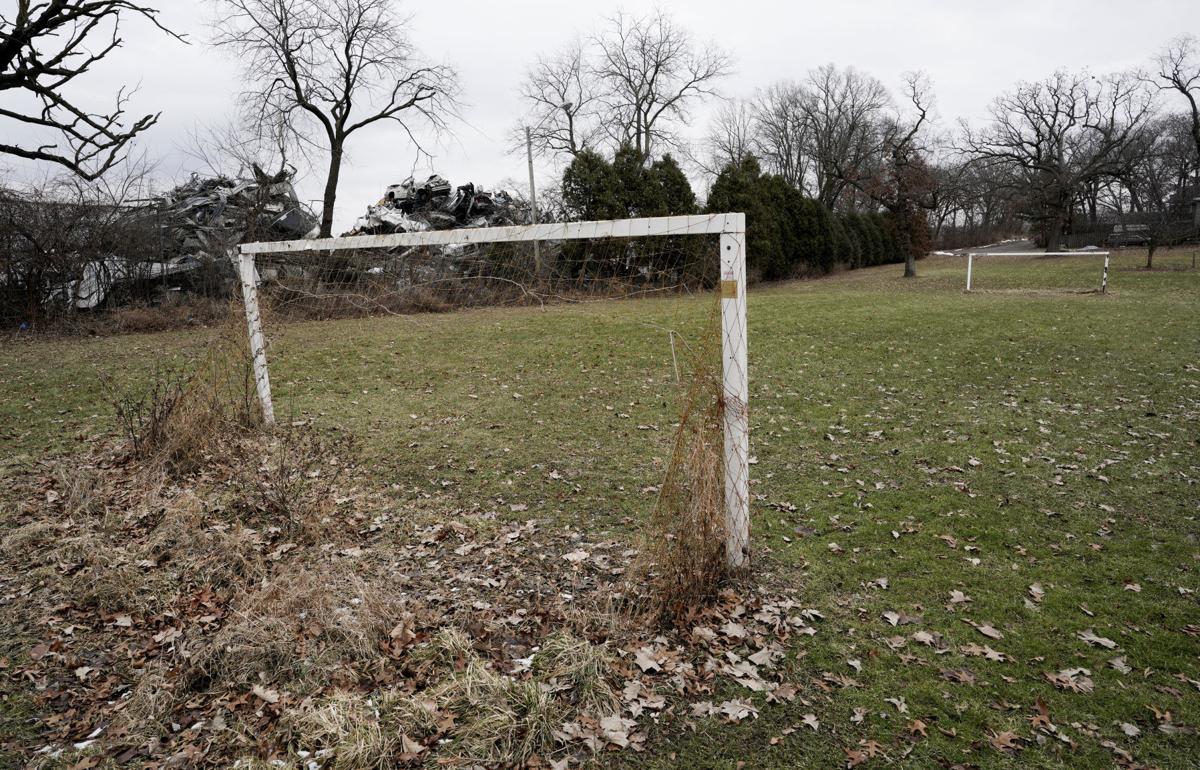 A soccer goal and net gather leaves at Heifetz Park off of Burr Oak Lane in the town of Madison. The city of Madison is conducting an inventory of town assets as it prepares to absorb much of the town in 2022. 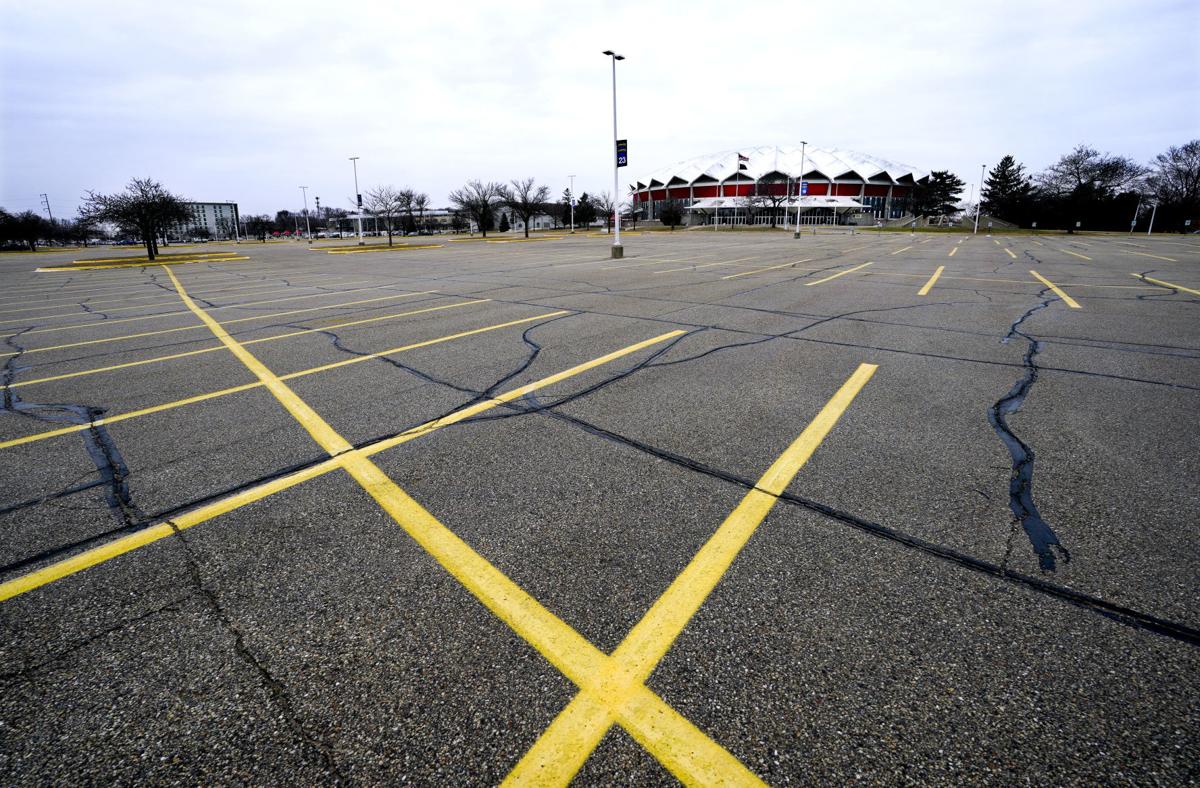 Any new TIF in South Madison would include current city property and land in the town of Madison, potentially including the Alliant Energy Center, above.