After a major setback, a nonprofit and partner are poised to proceed on a vibrant, energy efficient, $38.6 million, low-cost housing redevelopment that seeks to revitalize part of the ethnically diverse “Triangle” area south of Downtown.

The Bayview Foundation/Horizon Development’s mixed-use project, delayed for a year after it missed out on critical federal and state tax credits, would bring 130 units of multifamily housing — 120 of them for those making less than 60% of the Dane County median income — a new community center, community green and gardens, basketball court, playground and parking to a 6.4-acre site at West Washington Avenue and Regent Street.

The project, developed with extensive input from residents, would replace the nonprofit foundation’s 102 existing, obsolete townhouses built in the heart of the city’s historic Greenbush neighborhood in 1971. Construction would be completed in phases, so the diverse resident mix — 50% Hmong; 15% Vietnamese, Cambodian or Laotian; 20% Latino; 13% African American and 2% white — is not displaced.

“The buildings just can’t continue in the state they’re in,” Bayview executive director Alexis London said. “It’s really important we continue to move on the redevelopment project so we can ensure quiet, safe, modern and healthy housing at Bayview for the next 50 to 100 years.”

“This is a beautiful project, both aesthetically and to the great lengths Bayview’s leadership under Lexi went to engage their residents,” said Ald. Tag Evers, whose 13th District includes the site.

The Bayview Foundation, formed in 1966 to support culturally diverse, low-income families, many of them immigrant refugees from Southeast Asia, began planning for redevelopment in 2017.

Bayview initially envisioned a $4 million investment to rehab housing, plus more to improve its community center and build new housing units. But further study revealed rehabilitation of the buildings would be prohibitive, and the nonprofit produced a $29.3 million redevelopment involving demolition and new construction. The city approved a total $2.9 million for the project in 2018, but Bayview/Horizon failed to secure tax credits through the Wisconsin Housing and Economic Development Authority in the 2019 funding cycle.

The nonprofit’s proposal scored high but was found ineligible on a technicality because proposed rents hadn’t been approved. Since then, Bayview has received $1.3 million from Dane County, approved new rents with those in subsidized units still paying no more than 30% of income, and made a recent submission to WHEDA. It expects word on tax credits in mid-April.

Bayview/Horizon also used a “design justice process” involving residents and others to refine the project’s use of color, natural light, sheltered porches, garden space and more, London said. The partners integrated feedback from city planners to connect buildings to the street and surrounding neighborhood and increase access to the community center. They worked with Madison Gas & Electric on energy efficiency and sustainability.

“Ultimately, the setback gave us an opportunity to take more of a visionary approach to the site plan and architecture of the buildings,” London said.

“Bayview’s commitment to sustainability, particularly the arrangement with MGE and Slipstream to implement meaningful green elements in the design, marks an important path that I hope will be followed by developers looking to build in Madison,” Evers said.

The $38.6 million plan offers 10 new residential buildings, including eight townhouse structures with a total of 57 units and two apartment buildings, one four stories at West Washington Avenue and Regent Street, and the other three stories, with a total of 73 units.

The roughly 10,000 square-foot community center would have space for youth and senior programming, community events, a fitness center, commercial kitchen and more. It and other buildings would generally surround a green space with pavilion and community gardens, basketball court and playground. The site would have walking paths, artwork, landscaping, and 78 underground and 52 surface parking spaces.

“They’re getting really excited about the project,” London said of residents, some of whom have lived at the site for decades. “It’s finally becoming real to them.”

Bayview will be initiating a fundraising effort to help pay for the community center and added touches such as the pavilion and public art, she said.

The city’s Urban Design Commission heard an informational presentation on plans Wednesday evening. Bayview intends to file an application for city land use approvals on Feb. 19 and hopes to begin construction in the early spring of 2021.

Bayview’s project would initiate the third incarnation of the 26-acre Triangle bounded by West Washington Avenue and South Park and Regent streets, once the core of the low-income, multi-ethnic Greenbush neighborhood razed amid national urban renewal efforts in the 1960s.

Despite its setting at a prominent route into Downtown, the Triangle is isolated, physically turned inward through its design and cut off by its busy border streets. In July 2019, the city approved a new Triangle Monona Bay Plan that makes recommendations on land use, housing, transportation, parks and open space, and community services.

As Bayview seeks to move forward, the CDA is working on a redevelopment plan for its housing at the Triangle, but is still several years away from any development at the site, CDA deputy director Deborah Rakowski said.

Heading into the final day of January, Madison has enjoyed the 11th-warmest January on record, and the first weekend of February will feature an early hint of spring, according to forecasters.

The Keller Real Estate Group is proposing to demolish nine houses at the corner of West Washington Avenue and North Bassett Street for a six-story, H-shaped structure with first-floor commercial space, 103 apartments and 100 structured parking spaces.

Developers are seeking to push forward several big projects as the city of Madison review process, delayed by the COVID-19 pandemic, cranks back up.

"Bayview’s model is grounded in community building, not building buildings. That difference puts residents’ voices at the center of the design process."

A campaign to expand and improve low-cost housing that was expected to take three years has met its goal in less than a year. 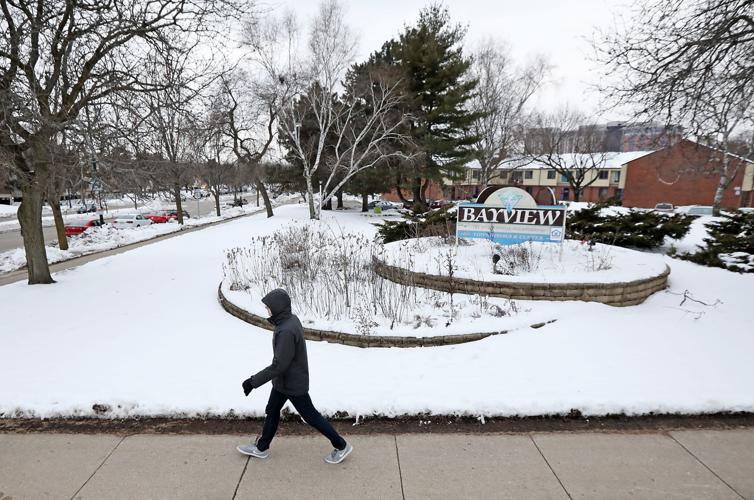 The Bayview Foundation's obsolete housing at West Washington Avenue and Regent Street is set far back and doesn't connect with the streets or surrounding neighborhood. A new site design for redevelopment better connects buildings with their surroundings and features a central green space. 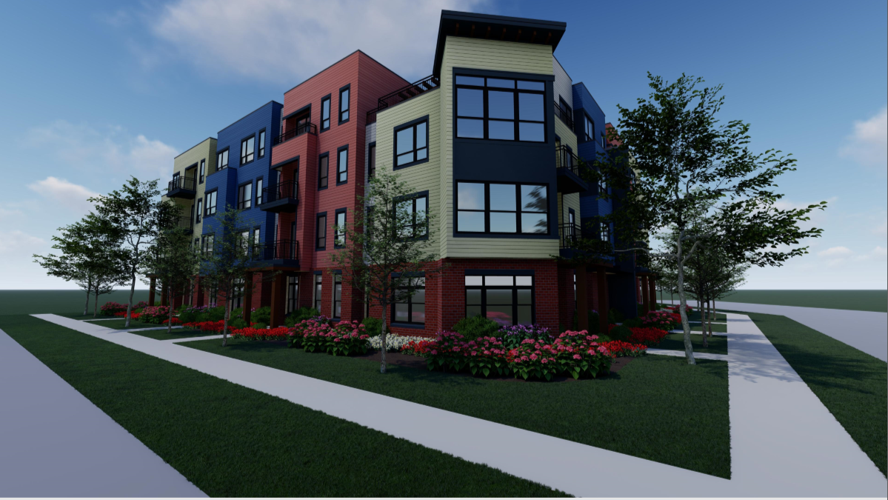 This is a preliminary rendering of a four-story apartment building at West Washington Avenue and Regent Street that would be among 10 low-cost residential buildings in a $36.8 million redevelopment.