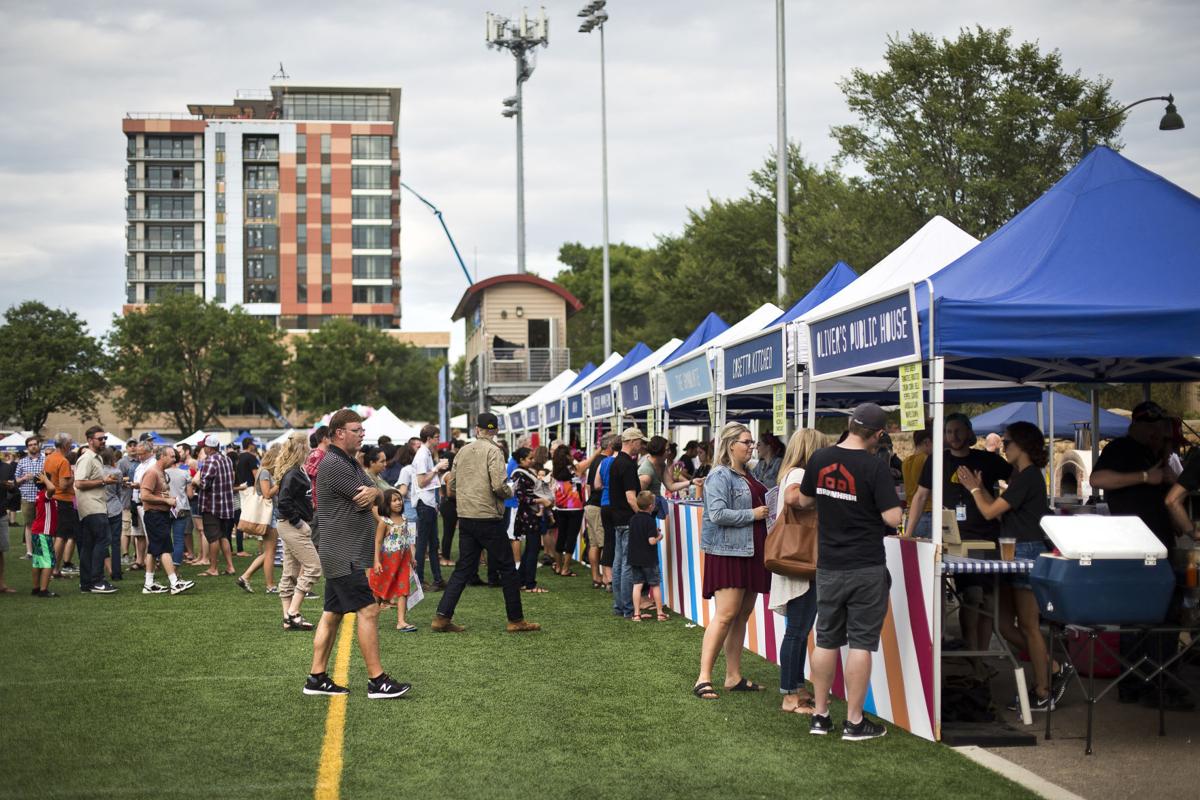 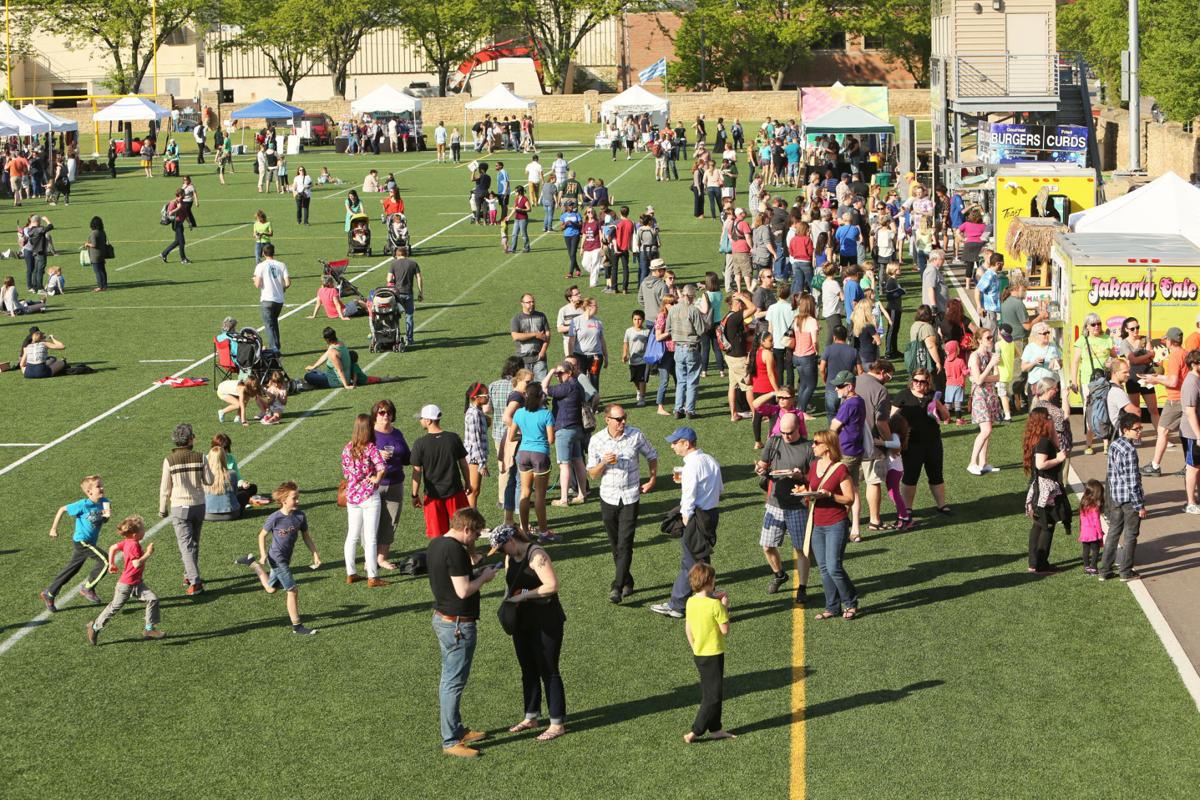 People attend a bodega, a free outdoor market, at Breese Stevens Field in 2016.

A proposal from the Breese Stevens Field management company to make major contractual changes with the city was largely well received by community residents Wednesday, but not without concern.

Dozens showed up to a neighborhood meeting to hear about the proposed contract changes with the facility operator, Big Top Baseball, to allow for a professional minor league soccer team, more concerts, a later ending time for some events, full alcohol sales at public events, increased rental fees for the operator and a longer-term agreement to manage the facility.

Some attendees lauded the work by Big Top Baseball over the past two years in bringing more events to the burgeoning East Washington Avenue corridor.

Joshua Dupont, who live a few blocks away from the historic stadium, said the proximity of his house to Breese Stevens factored into moving there.

“We’ve been very happy with everything going on,” he said.

Although, several residents shared concerns about the proposed changes, particularly over the increase in concerts and the associated noise, parking and traffic surrounding the facility at 917 E. Mifflin St.

“It just bugs me that a company can take away your peace of mind for profit,” said Marsha Cannon, who lives on Sidney Street.

“The center of the proposal is the pursuit of professional soccer at Breese,” said Vern Stenman, president of Big Top Baseball, which runs the Madison Mallards and other teams and events including the Independence Day “Shake the Lake” fireworks over Lake Monona. “This would be the first outdoor professional team in Wisconsin, and we feel it would connect nicely with the millennials and families that live in Downtown Madison.

“The upgrades proposed for Breese would make it the finest soccer facility in the state and be taken advantage of by all users of the facility,” Stenman said.

Meeting attendees expressed strong enthusiasm for bringing a soccer team to Madison, with one person saying their 6-year-old child “squealed” in excitement over the idea.

“I’m a huge soccer fan. I’m excited about the notion of having a soccer franchise,” neighborhood resident Matt Krueger said.

At a separate meeting Wednesday, a Madison committee pushed back a decision on a city proposal to add a one-story commercial building for concessions and restrooms inside Breese Stevens.

City Parks superintendent Eric Knepp said: “We feel Big Top has done a good job activating and operating the Breese Stevens facility. We’re only beginning negotiations. We want to hear from the community. It’s got potential to be a big deal.”

Specifically, Big Top is asking the city to consider:

“Concerts have been the top use of the facility for the last two years and, though we anticipate soccer becoming the primary use of the facility in the future, we want to have a dialogue with the neighborhood about the possibility of hosting more concerts and allowing us to experiment with later curfews for a couple events in future years,” Stenman said.

Some neighborhood residents said 14 concerts were too many and would prefer an annual cap of 10, hoping to have summer weekends without an event in the area to alleviate the “festival fatigue” of living on the city’s Isthmus.

“We are excited to make a long-term commitment to the facility and the neighborhood,” Stenman said. “We’ve learned a lot from the community over the last two-plus years managing the facility about how to best manage the facility, and we feel that the most interesting years of events at Breese are ahead of us.”

“Overall, I think a lot of people really enjoy the events,” she said. But residents have concerns about the number of big concerts, which bring benefits but are the most intrusive events; later ending times, especially on school nights; allowing more than beer and wine at public events; and the length of the contract, she said.

Ald. Ledell Zellers, who represents the site, said she has concerns and has heard from neighbors.

“The biggest concern I have heard from neighbors is related to the number of concerts and the level of noise from concerts, and to a lesser extent the noise from other events,” she said. “The other concerns I have heard are related to traffic, parking and alcohol.”

The key is balancing additional use and neighborhood impacts, Knepp said, adding that the Parks Division also must negotiate the best financial deal for the city. Any contract changes must be approved by the City Council, he said.

At a separate meeting, the city’s Urban Design Commission pushed back a vote on a city plan to add the new, one-story commercial building inside the structure.

The city’s Parks Division is proposing a $1.1 million project including a 3,750-square-foot building that would provide permanent concessions space and more restrooms next to the 1925 grandstand at the west end of the facility.

The moves are “an effort to make the historic landmark a more viable event space and to help ensure its ongoing preservation through continued and more diversified uses,” Parks spokeswoman Ann Shea has said.

Zellers requested the commission hold off a decision about the city project to give neighbors a chance to weigh in on the concession stand as it is “not divorced” from the proposed contract changes.

Bob Klebba, a Tenney-Lapham resident, said he was concerned about the concession building’s impact on the historic feel of the grandstand.

“This concession stand needs to be better integrated in the facility. It’s going to be more expensive, but when we’re dealing with historic buildings, that’s what we need to do,” he said.

Since the mid-2000s, the city has been making major improvements at Breese Stevens, including the game-changing installation of artificial turf in 2015.

In late 2015, the city hired Big Top Baseball to operate the facility with the hope that Big Top would bring its Mallards magic to the historic but long-underused stadium and continue the hip revival of the East Washington Avenue corridor.

Breese Stevens has since hosted major seasonal concerts including the Steve Miller Band, Wilco, Boston, and the Avett Brothers, with Queens of the Stone Age already set for May 22 and Steely Dan and the Doobie Brothers to perform on June 16.

During warmer weather, the stadium also hosts a monthly bodega, the “Catch and Reel” film series offering a movie on a large screen, a fish fry and other food, and beer and wine, Madison Radicals Ultimate Frisbee, the Madison Lacrosse Club, Madison 56ers soccer, East High School soccer and other sports and events.

Breese Stevens Municipal Athletic Field was built in 1925, with additions in 1934 and 1939. The stone wall enclosing the field was built by the Civil Works Administration in 1934. It was designated a city landmark in 1995 and listed on the National Register of Historic Places in 2015.

What do you think of possible big changes for Breese Stevens Field?

The city's Parks Division is proposing a $1.1 million project including a 3,750-square-foot building that would provide new, permanent concessions space and more restrooms.

OUR VIEW: More concerts and pro soccer team at historic stadium will help keep Madison a fun place to live, work and visit

Possible improvements to Brittingham Dog Park include expanding it without impacting the basketball and tennis courts, new fencing, landscaping, improving drainage, and trying a different surface.

The folk rock singer-songwriter will headline a concert at the outdoor Madison concert venue along with indie musician Neko Case on July 6.

Additional seating, other upgrades at Breese Stevens Field would happen sooner under proposal

Under an upcoming proposal, $1.3 million worth of upgrades could be implemented this year instead of 2021.

The total city investment in Judge Doyle Square would rise to $50.4 million.

Zellers, long an activist in neighborhood affairs and a champion of historic preservation, was elected to the City Council in the spring of 2013. The district runs along the Isthmus east of the State Capitol and north of East Washington Avenue.

But the field's management company says it will adjust its proposal to try and ensure the project is approved.

The Madison Landmarks Commission approved a plan for suite boxes at Breese Stevens Field after changes were made to better match the stadium's appearance. It still must be approved by Madison's Urban Design Commission.

Entities that run events at Breese Stevens Field and Warner Park are laying groundwork for entertainment including "drive-in" fireworks and movies.

People attend a bodega, a free outdoor market, at Breese Stevens Field in 2016.