Homeless, Lonisha Jordan and her sons, 10 and 12, sleep in their car, motels or other places, each day living a low-income housing crisis that shuts out many in Madison and Dane County.

So does Paul Buggs, who spends nights at a men's shelter in a church basement, and Tina Helt and her teenage son, who sleep in the entrances of buildings on streets hugging Capitol Square.

For all the local effort to provide shelter for those with little means -- and there's lot of it -- many feel the harsh realities of Madison's low-income housing shortage, low vacancy rates and state tenant-landlord laws that usurp local control and create barriers for those with spotty credit or rental histories, evictions or convictions.

As of Oct. 1, the county's priority list of the homeless seeking housing stood at 563 singles and 155 families. But those numbers don't tell a full story because many doubled up or self-paying in motels aren't eligible to get on the list. The Madison public schools alone served 1,099 homeless students in the 2018-19 school year.

"There's a lot of people here who have jobs that can't afford places," said Buggs, 59, who said he has worked his whole adult life but can't afford a place because knee, hip and back injuries slashed his income to $847 a month in Social Security disability benefits. "It's kind of hard in Madison."

"It's a huge challenge," concurs Mayor Satya Rhodes-Conway. "We've produced a lot of housing units, a thousand in five years. It's not enough."

The combination of factors especially hits blacks, who experience racism and disparities in poverty, unemployment, school achievement and incarceration.

While a state and national problem, racial disparities in homelessness are are acute in Dane County, where blacks represent 5.1% of the population but account for 53% of those seeking homeless services in 2018.

"Families are working hard every day and find that they still do not have enough," County Executive Joe Parisi said. "We know these pressures are felt disproportionately among people of color. We must continue to increase access to opportunity for all of Dane County's residents, and work to address some of the deep-rooted causes of the barriers people face."

Tina Helt, 48, and her son Noah Schaeffer, 19, have been homeless for months. She relies on Social Security disability payments for income and can't afford an apartment.

They're waiting for subsidized housing through the city's Community Development Authority, but the list is long and openings can take months or perhaps years. As they wait, they cope with indignities and deal with indifference or stares of passersby.

"People look at you like you're worthless," Helt said.

Many factors contribute to the local housing crunch. Madison grew faster than any city in the state last year. Fair Market Rent is $931 for one-bedroom and $1,519 for three-bedroom units. The vacancy rate has been low for years and averaged 3.4% for the first six months of this year; advocates say that should be closer to 5% to loosen the market.

To be considered "affordable," housing should cost no more than 30% of income, advocates say. Otherwise, housing costs cut into money needed for food, transportation and other needs. Using that standard, someone working full time for the state's minimum wage of $7.25 an hour would make about $15,000 annually and could only afford a monthly rent of $375.

Dane County Joining Forces for Families, embedded in Madison's poorest neighborhoods and communities throughout the county to advocate, solve problems and connect people to resources, hears more about housing insecurity than any other issue, its social workers say.

'You feel like you're not sinking anymore': Joining Forces for Families delivers close to home

To keep up, Madison must add up to 1,500 housing units a year, city officials said. It needs another 1,000 units of rapid re-housing units to support singles, and 170 units of permanent housing with support services, they said.

But neither the initiative nor state efforts adequately address housing for the most vulnerable -- those making less than 30% of CMI, or $27,100 for a family of three.

Of the 1,246 units created under the city's initiative, 229, or 18% were for those making 30% or less of CMI. Statewide, just 656 of 6,301 low-cost units created with assistance of federal tax credits were for that income limit. And it's not just construction. These units typically also require support services for tenants.

Stone House Development, which has done 12 projects with low-cost units in Dane County, created 880 units for those making up to 60% of CMI, but of that total, just 51, or 6%, are for those making less than 30%.

The main obstacle is cost of construction, Stone House principal Helen Bradbury said. Quality, low-income housing costs the same to build as non-subsidized housing, but developers can't finance the projects if the revenue from lower rents won't support the building cost, she said.

To make up the difference, projects with lower income requirements must cut construction costs or be subsidized by taxpayers, she said.

In her proposed capital budget for 2020, Rhodes-Conway boosts the city's Affordable Housing Fund by $500,000 to $5 million a year and delivers $1 million annually for a new "land banking" program to acquire parcels that can be used for low-cost housing and neighborhood-supporting developments.

But the city can help in other ways, especially by making changes in the development process to cut project costs, the mayor said. She's instructed staff to review city plans and studies to find "an inventory of ideas" to create more housing and expects the process to be done this fall.

Parisi's proposed budget for 2020 adds money for The Beacon homeless day shelter, more money for "navigators" to help people locate housing, and $66,000 for more staffing at the men's emergency shelter and creates a Division of Housing Access and Affordability in Dane County Human Services. For 2019, Parisi proposed $3 million for the county's Affordable Housing Development Fund, but the County Board increased the sum to $6 million. Parisi proposed $3 million for the fund for 2020 with County Board action still to come.

"This isn't to say that's all that's needed," Parisi said.

Jordan, 32, moved with sons John, 12, and Jamury, 10, to Madison from Chicago to escape gun violence, find better job opportunities, and create a better life for her family.

She gets child support, works temp jobs and is seeking permanent employment, but her income isn't enough in Madison's tight housing market. The family lives from its car, motels or other places and is on a waiting list for CDA housing.

"I just worry about the next day and what I can do to get it better," Jordan said. "I just want to move into an apartment and get my family into housing."

Jordan, who is black, typifies the barriers to housing many blacks face here.

A recent city analysis found a stark racial divide when it comes to rental housing in Madison. At least 50% of rental units almost anywhere in the city were affordable to white households. But only small, isolated areas on the North and South sides had 50% or more of rental units that were deemed affordable to the typical black household in 2016.

It's not just income.

"Unfortunately, some landlords are passing over candidates that have poor credit, prior evictions or convictions on their records," Anthony said. "Landlords that don't want to rent to African Americans have plenty of cover to discriminate."

The Madison School District's Transition Education Program, which provides services to homeless students, reports more than 61% of those students are black, 16% Latino, 16% multiracial, and 6% white this past week.

"When you don't have adequate housing it impacts kids who attend school and their behavior," said Michael Johnson, executive director of the Boys & Girls Club of Dane County. "It also has an impact on their parents' overall health and their well being."

Solutions include more low-income housing, prevention programs, transportation, jobs and training, building wealth for women of color and services for people after they're released from incarceration, Anthony and Johnson said.

"Are we going to continue to plan and make Madison a place that includes poor people and people of color as part of this community?" Anthony asked. "Or will we put up public policies barriers that make it impossible for the poor and minorities to live and work in this community?"

Heartland Housing's project has helped 48 adults and 104 dependents get off the streets or out of temporary shelter.

"We have to make sure all people have the right to live where they can, and where they choose," Galvan said.

'They treat me like a person': Off the Square Club continues to help homeless in 40th year

“I have been beaten, stabbed, left for dead on multiple occasions,” said Karissa Schaper, a homeless woman who seeks refuge at the center in Downtown Madison. The club has helped her get "stronger and stronger."

“A vibrant community is a great community to the extent it cares for its most vulnerable people, and by that measure, Madison is failing,” said Rev. Jonathan Grieser, rector at Grace Episcopal Church.

Organizers are trying to secure other spaces, including hotel and motel rooms, to relocate elderly homeless people and those with underlying health conditions from crowded shelters where it's hard to practice social distancing and isolate those who are sick.

The Wisconsin Housing and Economic Development Authority this week awarded a total $87.5 million in state and federal tax credits to six low-income housing projects in the Madison area that will deliver a combined 633 housing units, including 579 for those with lower incomes. 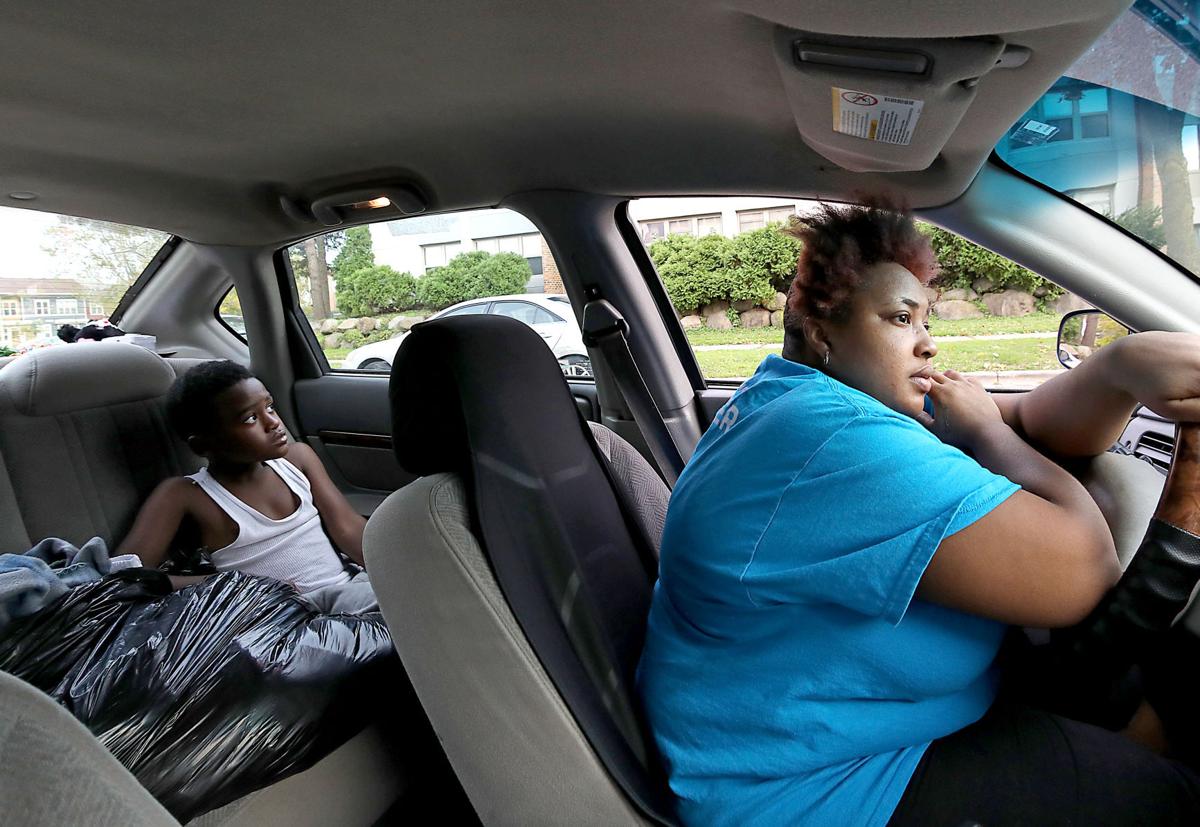 Lonisha Jordan and her son, Jamury, 10, in the family's car. Jordan and two sons moved to Madison from Chicago but have not been able to secure housing and sometimes sleep in their vehicle, motels and other places. 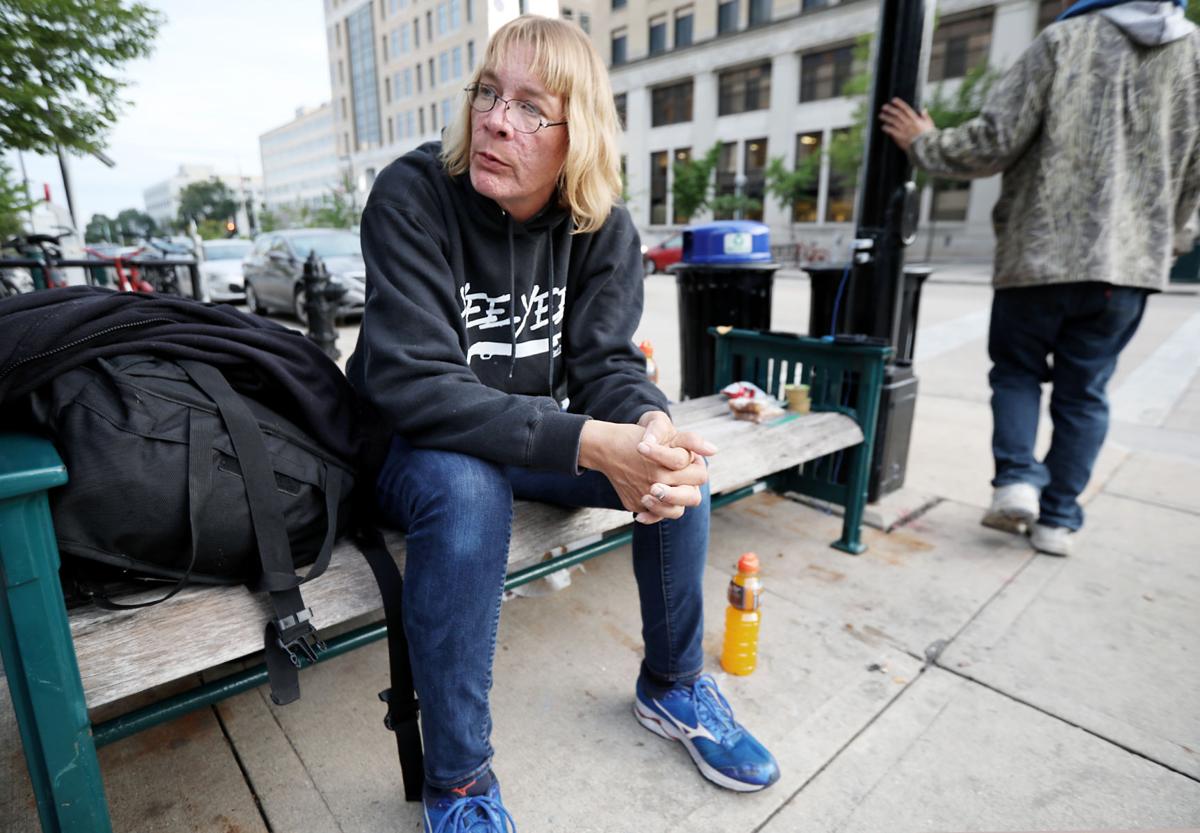 Tina Helt, with her 19-year-old son, at right, are on a list for subsidized housing with the city's Community Development Authority. 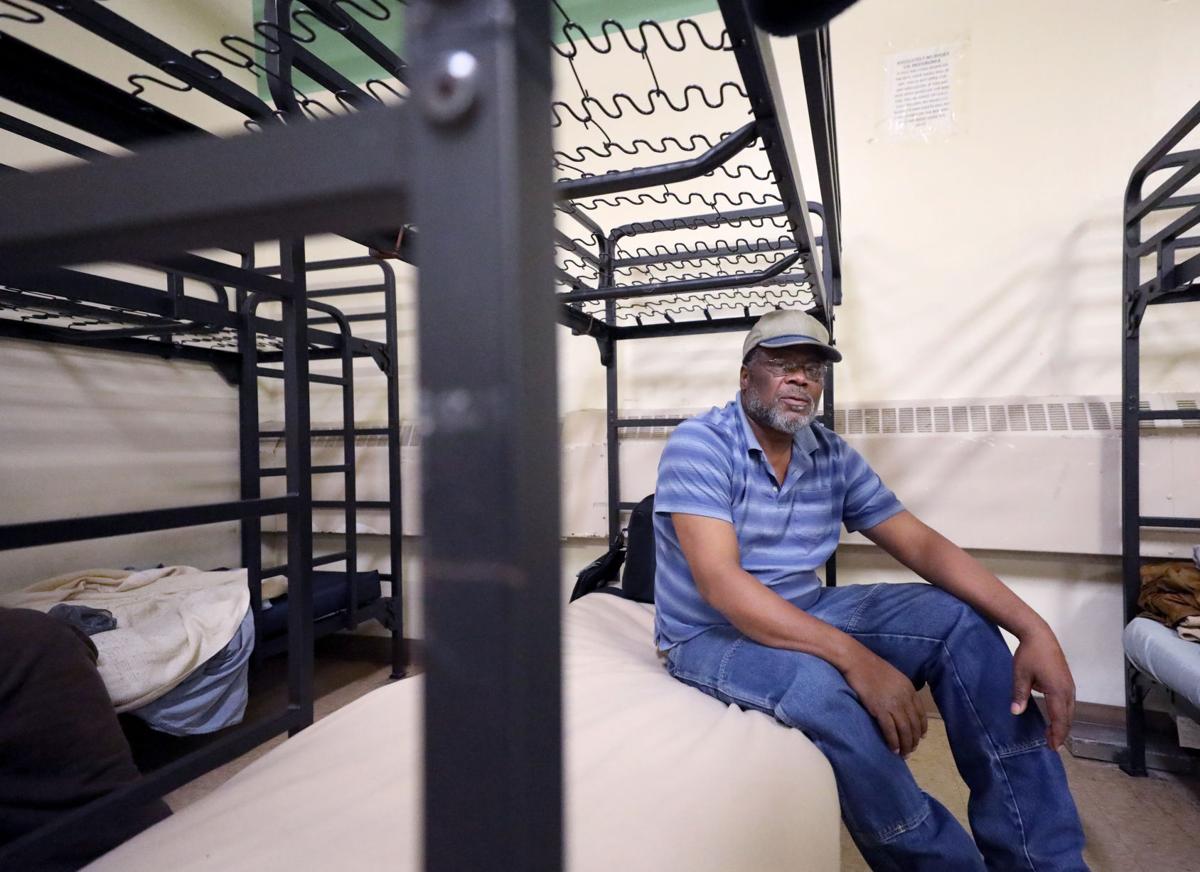 Paul Buggs, who worked his adult life but now relies on Social Security disability income, at the Porchlight men's homeless shelter in the basement of Grace Episcopal Church on Capitol Square.