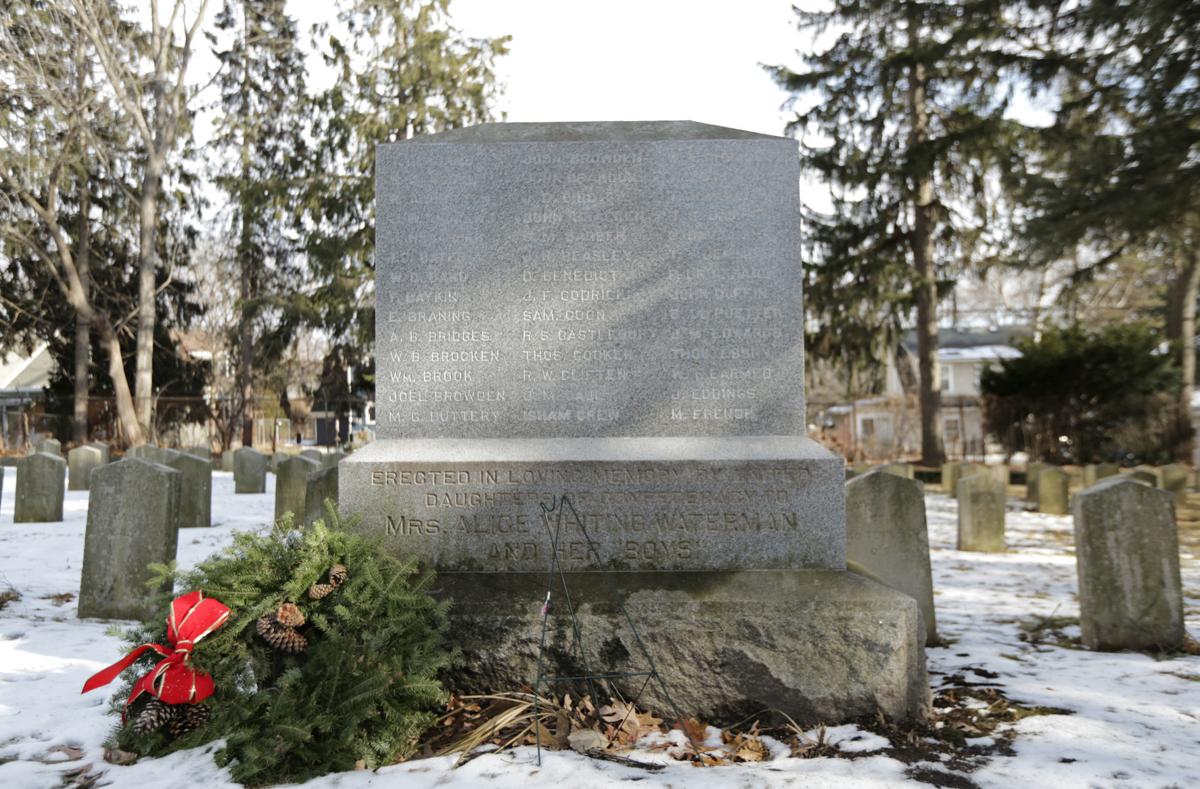 The monument to Confederate soldiers placed by the United Daughters of the Confederacy at Forest Hill Cemetery in 1906. 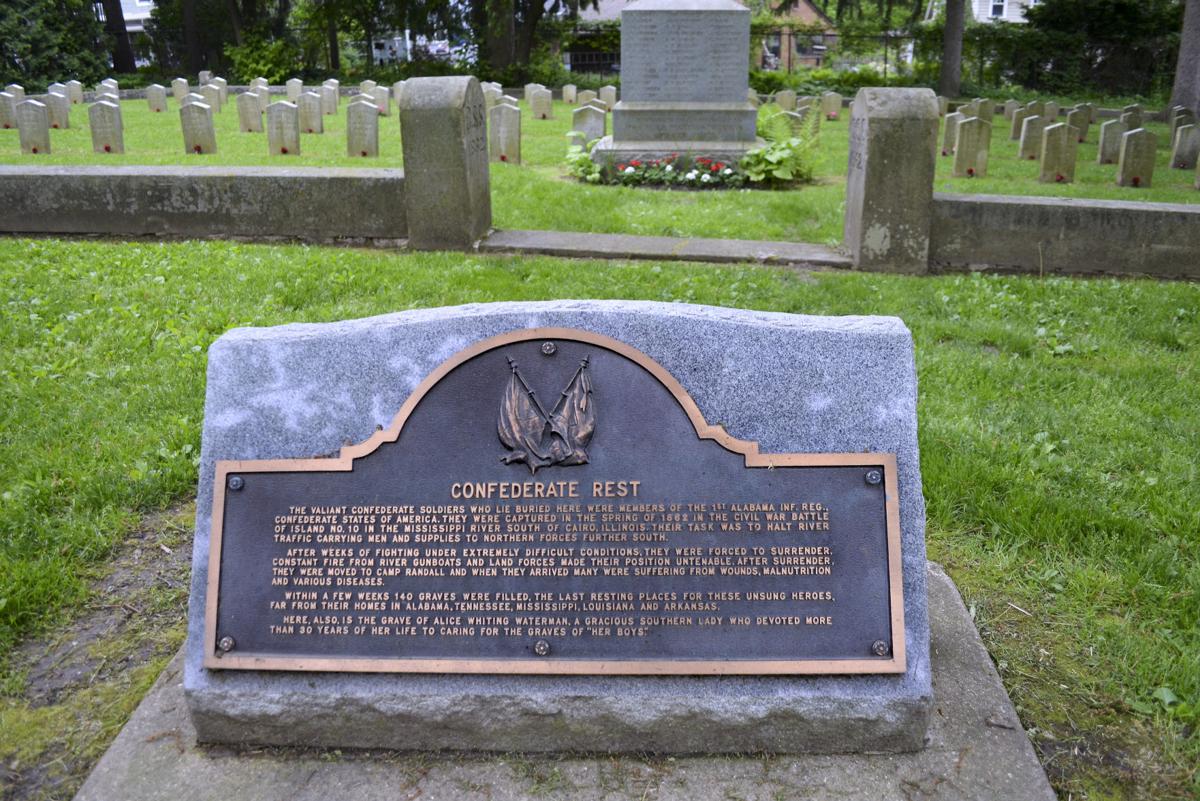 The 1981 plaque to the Confederate soldiers buried at Forest Hill Cemetery before Mayor Paul Soglin ordered its removal in August.

A majority of speakers at a joint meeting of three Madison commissions expressed some support for keeping the memorials at the Confederate Rest section of the public cemetery, while others advocated for putting the monuments, the Civil War and the decades that followed in better context for visitors by adding signage.

Several people supported leaving a larger, stone cenotaph installed in 1906 that lists the names of the 140 soldiers buried at the cemetery at 1 Speedway Road, while a theme among those speakers was that the city should “respect the dead.”

“I worry what we’re using these Confederate dead for is to make a statement about our present values,” said Madison resident Paul Sherman.

But the major point of contention for the stone monument is that it was donated by the United Daughters of the Confederacy.

Mayor Paul Soglin said the group used “lies and betrayals” to put the Confederacy in a more positive light as part of a broader “Lost Cause” movement of Jim Crow laws and Black Codes meant to subjugate African-Americans following the Civil War.

“I don’t want to denigrate the people who died,” said Madison resident Kathy Walsh. “But I don’t want the United Daughters of the Confederacy associated with the city.”

Soglin ordered a smaller plaque next to the Confederate Rest be removed on Aug. 16 following a violent protest involving white supremacists in Charlottesville, Virginia, that left one person dead and more than 30 injured.

That plaque, which had been donated to the city in 1981, noted the history of the Confederate graveyard and described those buried in Forest Hill Cemetery as “valiant Confederate soldiers” and “unsung heroes.”

Most speakers, including some wanting to keep the larger monument, were fine with the plaque’s removal as its more recent installation amounted to little historical value.

“These soldiers who fought for the South were doing so in support of slavery. I don’t feel there’s anything heroic about that position,” said Daniel Einstein, a historic and cultural resources manager at UW-Madison.

City parks superintendent Eric Knepp noted, though, the plaque does not comply with cemetery policies as it includes a Confederate battle flag. Last year, the policy was changed to allow the display of only the U.S. flag, flags of the armed forces, the city and state flags, and recognized flags of current United Nations members.

Soglin called for the Tuesday meeting of the city’s Landmarks, Park and Equal Opportunities commissions to guide a decision on the monuments.

He is asking the commissions to consider three options:

The mayor prefers the 1906 monument remains so a new monument can be constructed to explain the “lies and betrayal” of the United Daughters of the Confederacy and the “Lost Cause” movement.

“For those who want the dead honored, their place in history and their place in this cemetery is fixed. The only change is we’re going to tell the truth,” Soglin said.

Tom Garver, a retired art historian, said he takes no issue with the removal of the 1981 plaque, but would like to see a replacement sign to explain the Confederate Rest history.

“What is left at Confederate Rest isn’t even a monument. It’s a grave marker,” Garver said. “There is no reference to the lost cause, or unsung heroes, or other covert or overt expressions of white supremacy.”

Each of the three commissions will deliberate the topic separately at future meetings.

What do you think of Mayor Paul Soglin ordering removal of Confederate monuments at Forest Hill Cemetery?

On Tuesday, the city's Landmarks, Park and Equal Opportunities commissions will conduct a joint meeting to create a plan for two Confederate monuments at Forest Hill Cemetery on the West Side.

Soglin, who last week ordered the removal of a 1981 plaque at the Confederate rest section of Forest Hill Cemetery, at a press conference Monday outlined three options for a larger stone monument placed at the West Side cemetery in 1931.

Mayor Paul Soglin said in a statement that "there should be no place in our country for bigotry, hatred or violence against those who seek to unite our communities and our country."

Most members approved of the removal of the plaque and cenotaph but disagreed on whether to place a historical marker at the site.

Three city of Madison committees are considering the fate of memorials at the Confederate Rest section of the Forest Hill Cemetery.

Madison commissions split on what to do with Confederate cemetery markers

Three Madison commissions have offered split recommendations on what to do with monuments at the Confederate Rest section of the public cemetery.

The council voted Tuesday to remove a stone monument at the Confederate Rest graveyard after Mayor Paul Soglin removed a separate plaque in August.

The monument to Confederate soldiers placed by the United Daughters of the Confederacy at Forest Hill Cemetery in 1906.

The 1981 plaque to the Confederate soldiers buried at Forest Hill Cemetery before Mayor Paul Soglin ordered its removal in August.