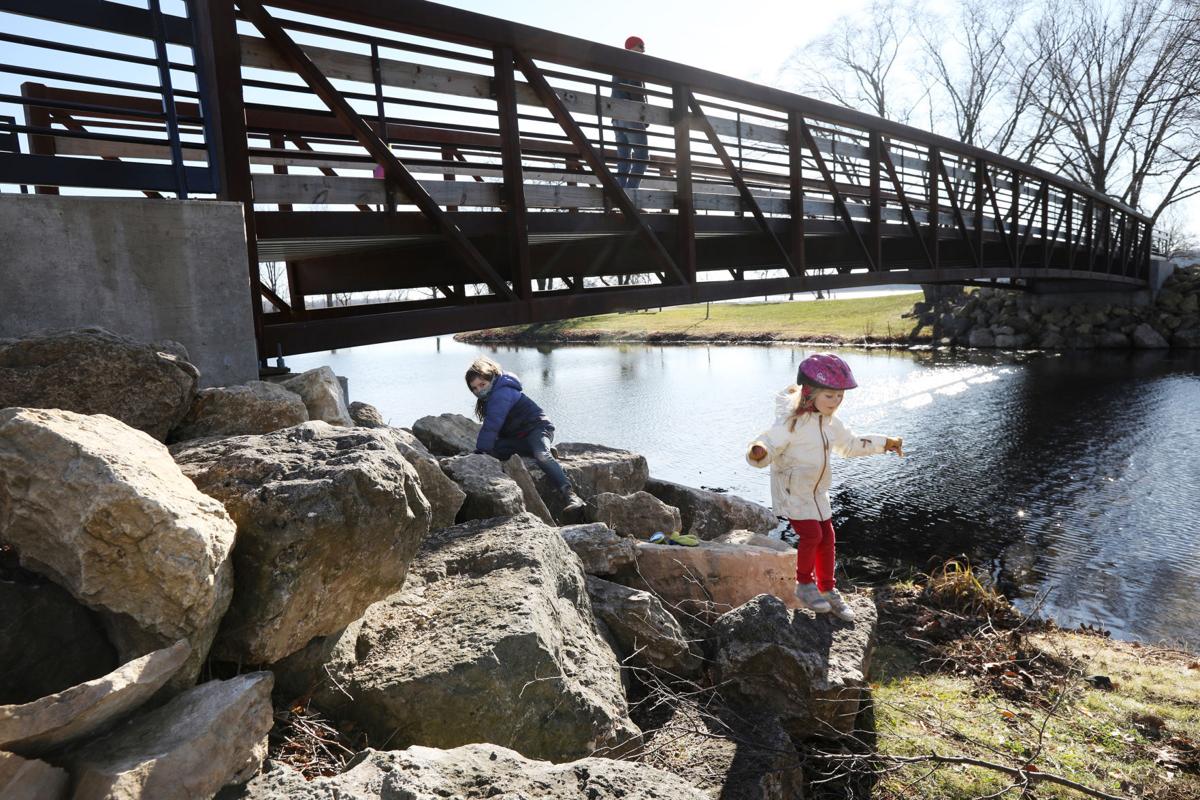 Hazel Morrison, 5, right, and her sister, Louise, 7, from Old Mill Creek, Ill., climb on rocks during a visit to Vilas Park with their grandmother, Anne Rodgers. The city is crafting a master plan that would guide up to $15 million in park improvements. 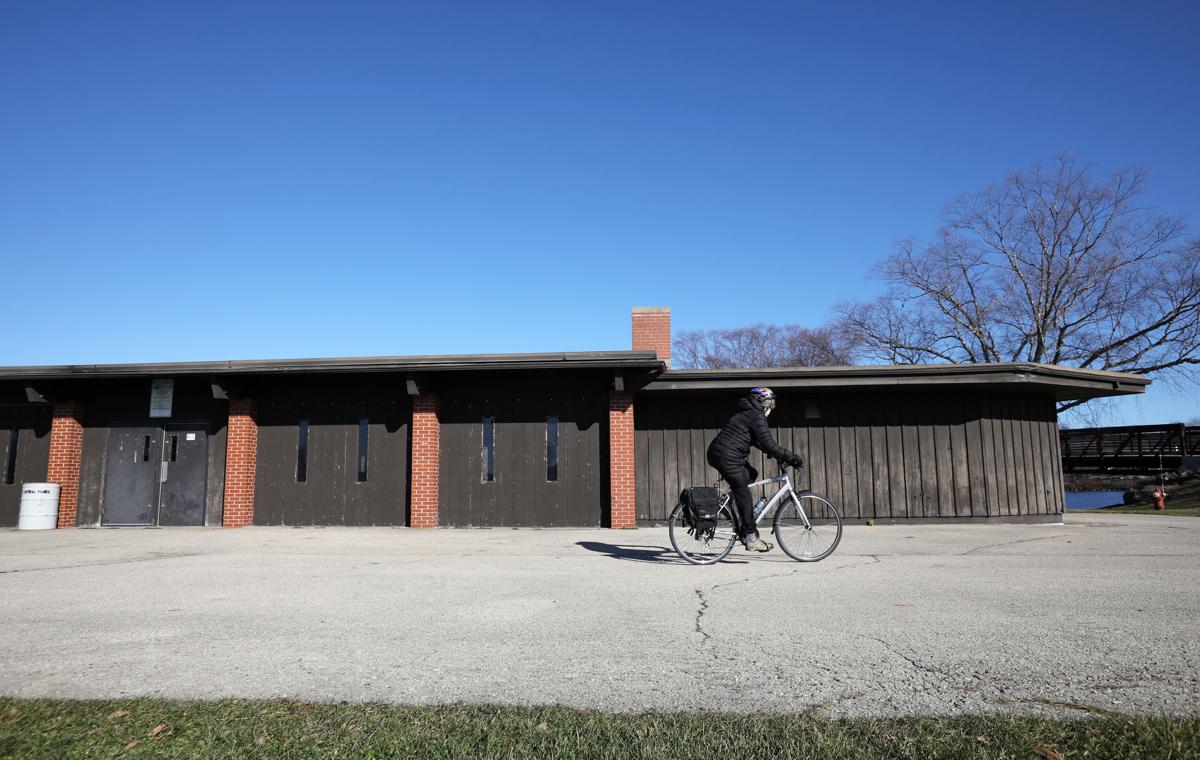 Plans call for replacing the aging main shelter with a new facility, including a community room that would still serve skaters and hockey players in the winter. 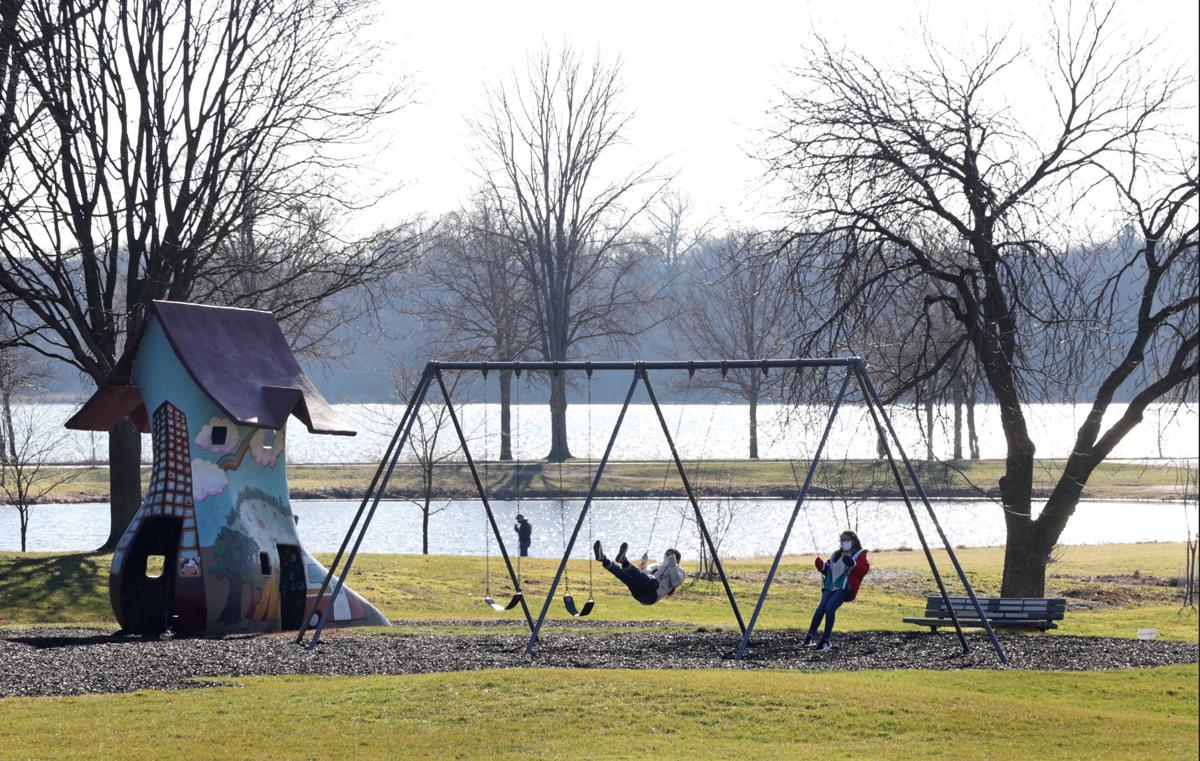 Visitors swing at the Vilas Park playground, next to the "Old Woman in the Shoe" slide. 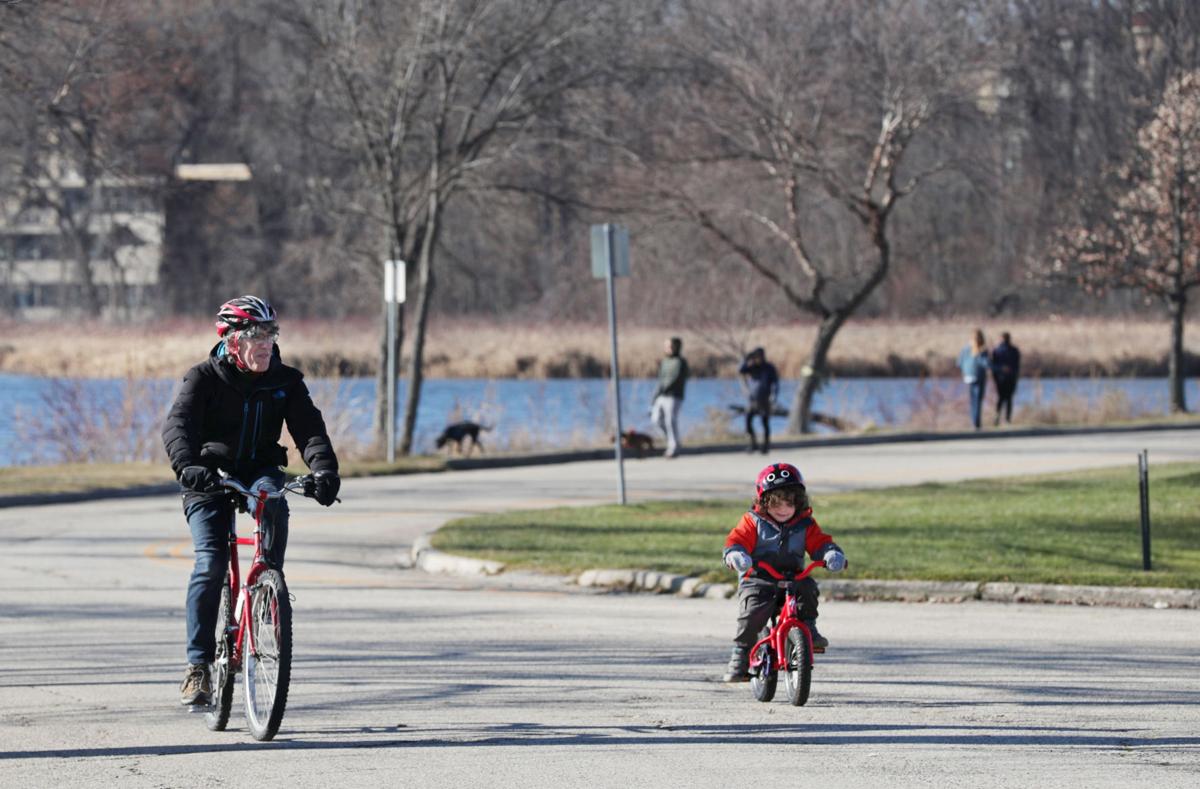 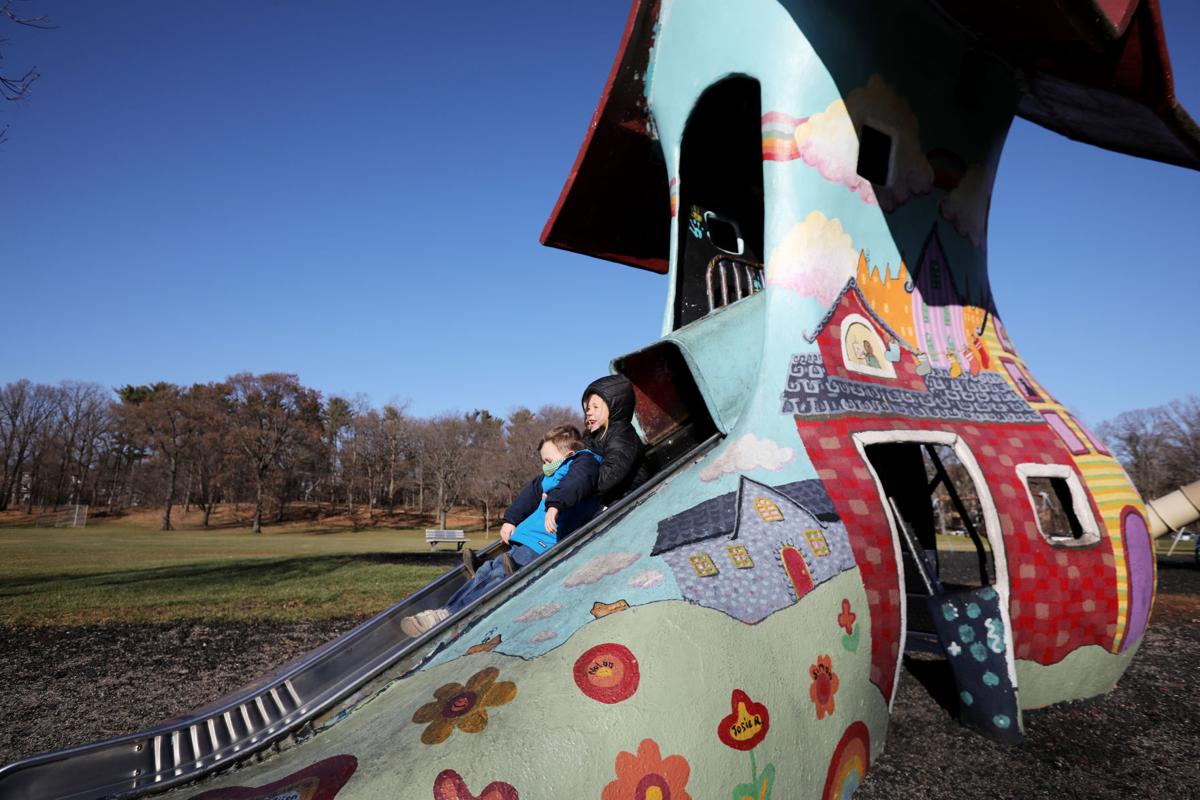 Grace Brager, 5, right, and her brother, Liam, 3, of Mount Horeb, ride tandem down the "Old Woman in a Shoe" slide at Vilas Park, built as a gift to the community in 1962.

The beauty of Vilas Park — its lakefront, lagoon, stone bridges and open spaces — is undeniable.

But residents and other park users have had a mixed reaction to a draft master plan for the much-used 46-acre park next to Vilas Zoo on the Near West Side, which was developed in the early 1900s and whose amenities and facilities are at the end of their serviceable lives.

“Given its history and location, it is a critically important public asset as the city of Madison continues to grow,” parks superintendent Eric Knepp said.

“But most of the infrastructure at the park is aging out; the playground equipment and the large shelter are two big examples. The parking lots and roads are not designed in a way we would design them today, and the pavement is in terrible condition in some of the lots and paths.”

The plan would guide perhaps $10 million to $15 million in improvements to the park in the next 10 to 15 years.

Parks Division staff is scheduled to present the plan to the city’s Urban Design Commission on Wednesday. Public comment will be accepted until Friday, although additional adjustments may be made before the Parks Commission acts on a final plan.

“Residents by and large are very supportive of the plan to close Vilas Park Drive to vehicular traffic,” said Ald. Tag Evers, 13th District, who represents the area. “The huge numbers of commuters cutting through the park created safety concerns, and the drive’s closure since the pandemic has been broadly lauded.”

But many object to other parts of the plan, he said, including paving some open space for additional parking, consolidating three cherished playgrounds, and a proposal to move the entrance to the zoo and the park to a new intersection.

Sarah Bahauddin, president of the Vilas Neighborhood Association, declined to comment on the plan, saying the association is developing a formal response.

Greenbush neighborhood residents are most excited about closing Vilas Park Drive to through traffic, resident Jim Lorman said. But, he said, “Many community members see serious shortcomings in key features of the plan, especially associated with public transit, parking, location of shelters and playgrounds, and lagoon management.”

The draft plan is intended to address the park’s needs, not just in terms of maintenance but a vision for the future, the Parks Division says.

The main shelter building, set on the shore of the lagoon near a bridge, is more than 50 years old and wearing down, Knepp said. Its walls were designed to be removable so it could transition from an open structure in the summer to a warming house in the winter. But that flexibility makes the building energy-inefficient.

The new building would include a community room, still act as a warming shelter for skating and hockey and offer views of the lagoon and lake. The plan also envisions two new smaller, open picnic shelters and the renovated bathhouse.

The park’s six tennis courts are filled with cracks and have been resealed at least six times with diminishing returns after each repair, Knepp said. Like most of the park’s paths and parking, they were built to an earlier standard insufficient for the often wet and mucky soils that they sit upon.

The lagoon, where Olympic speedskating gold medalist Eric Heiden trained as a boy, would be maintained, while burial mounds would be more appropriately highlighted as a key feature of the Lake Wingra overlook, Knepp said.

Vilas Park Drive, which dates to the earliest days of the park and runs roughly along Lake Wingra, is not a public right-of-way and was not built or maintained to meet those standards, the Parks Division says.

The draft plan would close the drive to through traffic, maintain two-way traffic access to the main shelter, improve pedestrian and bike connections, and create a dedicated tour and school bus drop off.

Before the city imposed restrictions due to the COVID-19 pandemic, 96% of all motor vehicle traffic along Vilas Park Drive was commuter and other cut-through drivers, amounting to more than 200 cars per hour traveling east during the afternoon commute, Lorman said.

“The result of the restriction on pass-through motor traffic was a major transformation of the Vilas Park lakeshore area to a vibrant multi-generational community gathering space for people with many interests and all abilities,” he said.

The plans for parking call for reducing the current 429 spaces in multiple lots to about 420 spaces, resulting in a decrease from 262,389 square feet of paved surface to 203,117 square feet of paving, plus more landscaping and enhanced pedestrian safety.

But some residents object to plans to pave over some existing open space to achieve that outcome.

“This work continues as stakeholders weigh in on details of the draft plan,” Knepp said. “One of the lessons with each of these big master plan projects is that Madisonians care a lot about parks, which is great. And that finding the right balance point is a real challenge.”

Since March, the city has been sheltering homeless men at the Warner Park Community Recreation Center on the North Side.

No precipitation is in the forecast for the first week of December for southern Wisconsin, with highs around to slightly above normal, according to forecasters.

After prior attempts to restore the Annie C. Stewart fountain have fallen short, the city and neighbors are looking to determine the fate of the ornate but neglected 95-year-old fountain.

Vilas Zoo closed on March 14, 2020, due to the COVID-19 pandemic. Much of the zoo opened again on June 18, but the Children’s Zoo remained closed.

For this year, the Parks Division hopes to close streets around Kennedy, Marlborough, Wingra Creek and Warner Parks with routes just under two miles to spread the event out around the city and disperse people with the COVID-19 pandemic still present but waning.

Hazel Morrison, 5, right, and her sister, Louise, 7, from Old Mill Creek, Ill., climb on rocks during a visit to Vilas Park with their grandmother, Anne Rodgers. The city is crafting a master plan that would guide up to $15 million in park improvements.

Plans call for replacing the aging main shelter with a new facility, including a community room that would still serve skaters and hockey players in the winter.

Visitors swing at the Vilas Park playground, next to the "Old Woman in the Shoe" slide.

Grace Brager, 5, right, and her brother, Liam, 3, of Mount Horeb, ride tandem down the "Old Woman in a Shoe" slide at Vilas Park, built as a gift to the community in 1962.