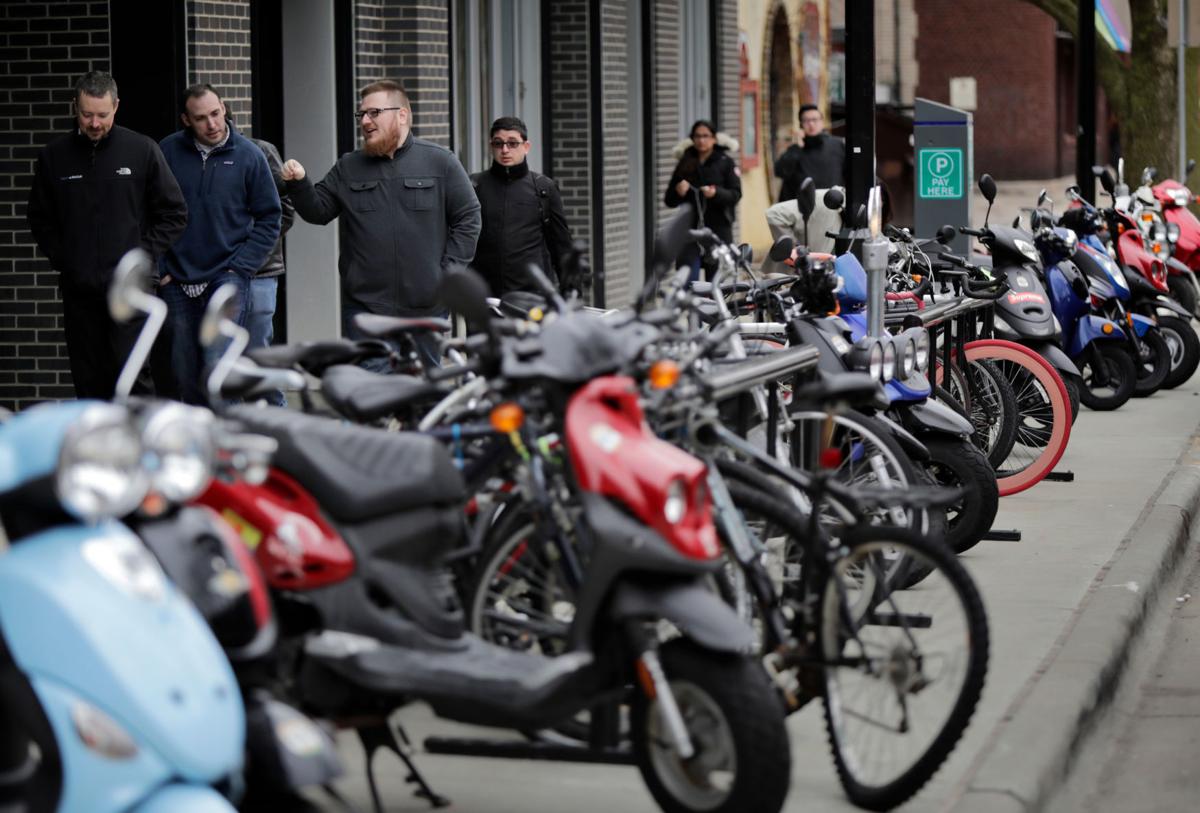 Pedestrians navigate a sidewalk packed with bikes and motor scooters outside of The Hub apartment building on Frances Street near State Street. The city is poised to create more bicycle parking Downtown and ban moped parking on most sidewalks and terraces. 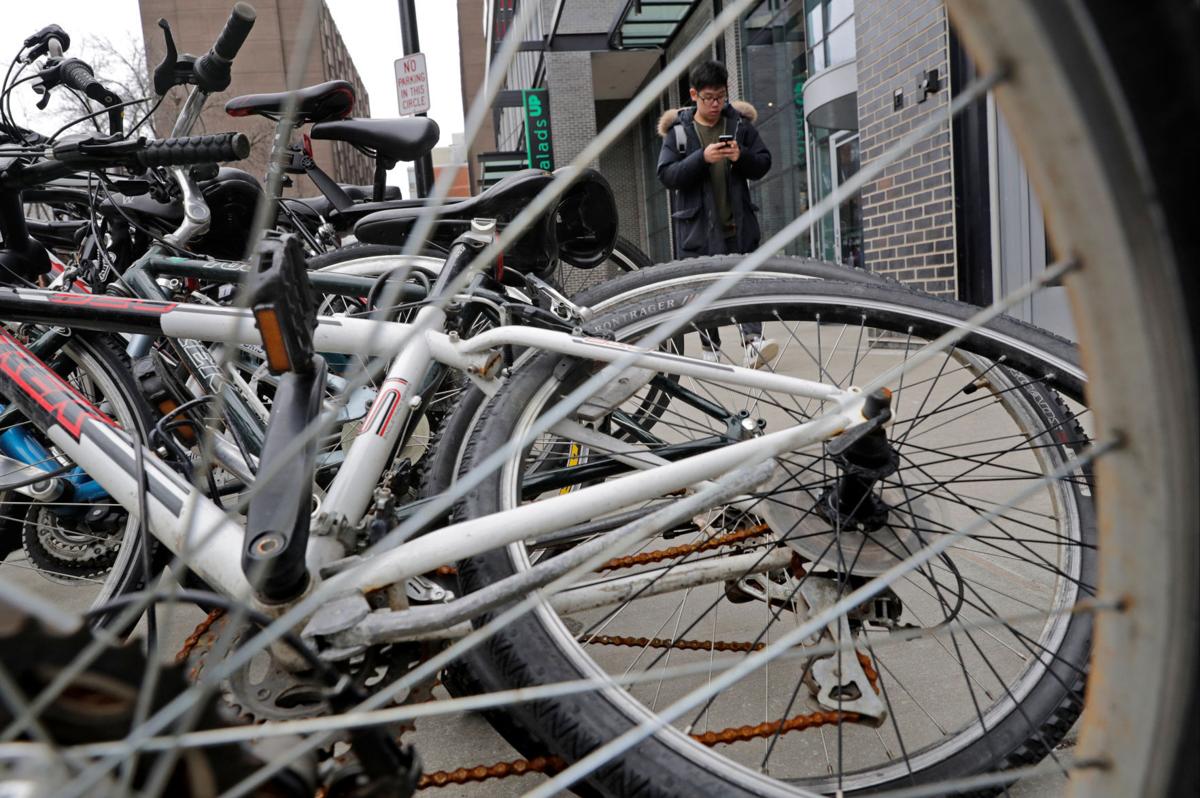 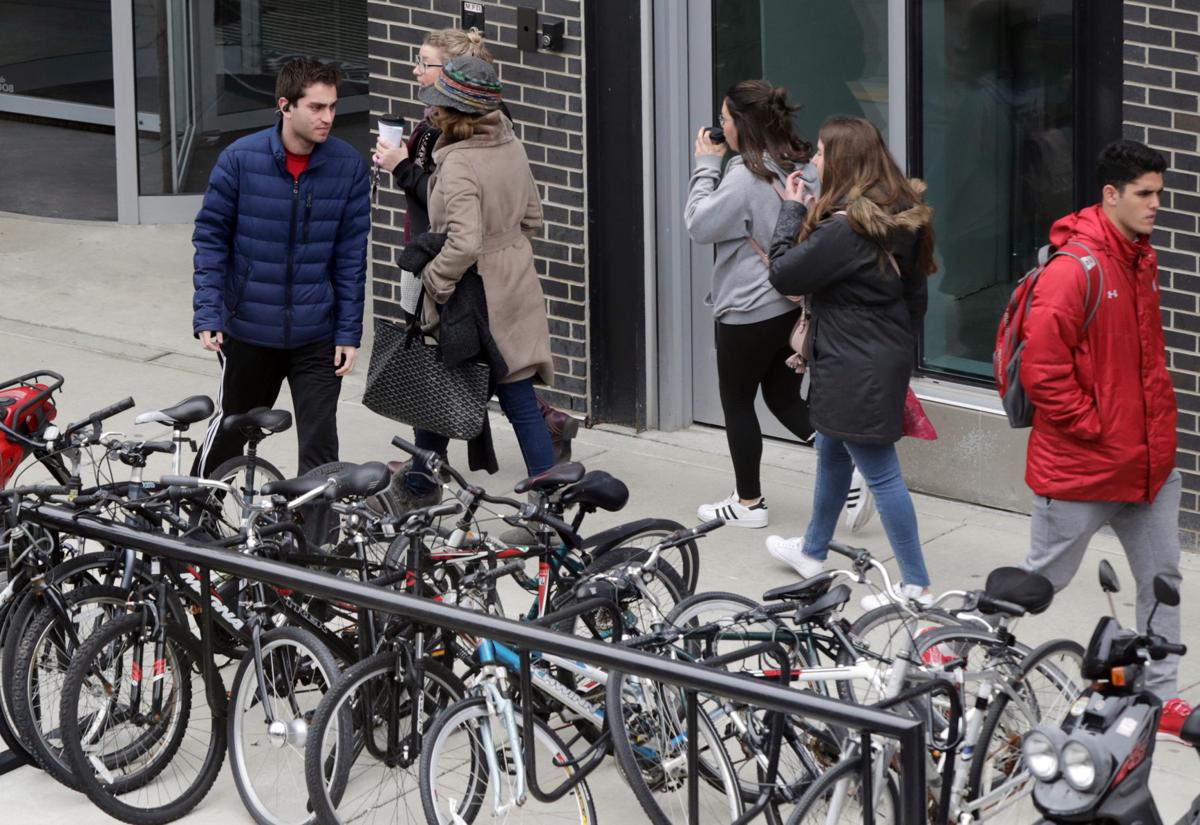 Like many near the UW-Madison campus, a bike rack outside The Hub on Frances Street near State Street gets heavy use.

Seeking to address a haphazard, unsightly jumble that has long challenged the city, Madison is poised to create more bicycle parking Downtown and impose new rules on moped parking.

The city could add roughly 330 bicycle spaces plus more spots in a pilot “bicycle cage” in one of the city’s parking garages.

New rules for mopeds would largely ban them from being parked on sidewalks and terraces, addressing concerns about safety, aesthetics, blocked sidewalks and competition with bicycles for spaces.

The State Street-Capitol Square area simply needs more bicycle parking, with racks and other spaces often full even when there are no special events, said Arthur Ross, the city’s pedestrian-bicycle coordinator. The city has been weighing changes for moped parking for years, he said.

Citywide, mopeds should be considered as motorcycles for parking purposes, with moped parking prohibited on all sidewalks and terraces except in designated locations, the 65-page study by Toole Design Group says. The city should explore new strategies for moped parking, including new parking in ramps and more on-street spaces, it says.

Mayor Paul Soglin and Downtown City Council members intend to introduce on April 18 an ordinance to ban moped parking on sidewalks and terraces, except designated spots. It will be reviewed by committees, and if approved by the council, would take effect Aug. 15.

The ordinance is based on the recommendations of a disbanded committee on the issue that were made in 2012 but never carried out. The Toole study echoes the committee’s recommendations.

“It’s never gone away as an issue,” Ross said. “The timing is right.”

Meanwhile, council President Mike Verveer, 4th District, and Ald. Ledell Zellers, 2nd District, have proposed a resolution to adopt the study, now under review by city committees, as a policy framework and guide for future spending.

The council is expected to consider the study this spring.

“It’s the most comprehensive accounting of bicycle parking and moped parking I’ve ever seen,” Verveer said.

Currently, bicycles, mopeds and scooters can’t be parked in front yards of residences, but bikes largely can be parked anywhere else they don’t interfere with pedestrian travel, except for attached to trees.

Outside the UW-Madison campus and State Street, mopeds currently can be parked anyplace a bike can, including bike racks; sidewalks, if the pedestrian path isn’t blocked; legal spots on the street, a lot or ramp.

The Toole study’s many recommendations won’t be implemented at once, Ross said.

But the city has already ordered 100 meter ring bicycle racks that can be attached to parking meter poles, with installation anticipated this spring and summer, he said.

The study recommends locations where the city can add another 233 bicycle parking spaces, but the spaces must be vetted by city staff for competing potential uses, he said.

The study also recommends a pilot bicycle cage with on-demand access control 24 hours a day, seven days a week in the State Street-Capitol parking garage. In 2016, Dane County spent $70,000 to install a cage with capacity for 30 bicycles in the county garage at the corner of West Main Street and South Fairchild streets. It’s unclear if or when the city would install a bicycle cage.

Proposed changes for mopeds, if approved, would eliminate longstanding competition between bicycles and mopeds for parking spaces, Verveer said.

Major Downtown landlords have indicated they could accommodate moped parking needs within existing indoor parking garages, Verveer said. Also, the proposed ordinance will let landlords seek permits to allow moped parking on the terraces on a limited number of blocks in the 8th District near campus, he said.

In 2011, the state let municipalities regulate mopeds as motorcycles and create parking rules. The following year, UW-Madion changed its moped parking program, raising permit prices and making other moves to encourage riders to park mopeds in one spot and take a bus and walk around campus.

The Toole Design Group study offers a series of recommendations, including:

The effort was a recommendation in the 2008 Platinum Bicycling Committee report.

The Madison Transit and Parking Commission pushed back voting on an ordinance Wednesday that would ban parking mopeds citywide on sidewalks and terraces with some exceptions.

A Madison official is tuning in to turn down the noise of vehicles.

Company removes e-scooters from Milwaukee until rules are in place

Under the bipartisan measure, scooters must weigh less than 100 pounds and abide by a 15 mph speed limit.

Pedestrians navigate a sidewalk packed with bikes and motor scooters outside of The Hub apartment building on Frances Street near State Street. The city is poised to create more bicycle parking Downtown and ban moped parking on most sidewalks and terraces.

Like many near the UW-Madison campus, a bike rack outside The Hub on Frances Street near State Street gets heavy use.