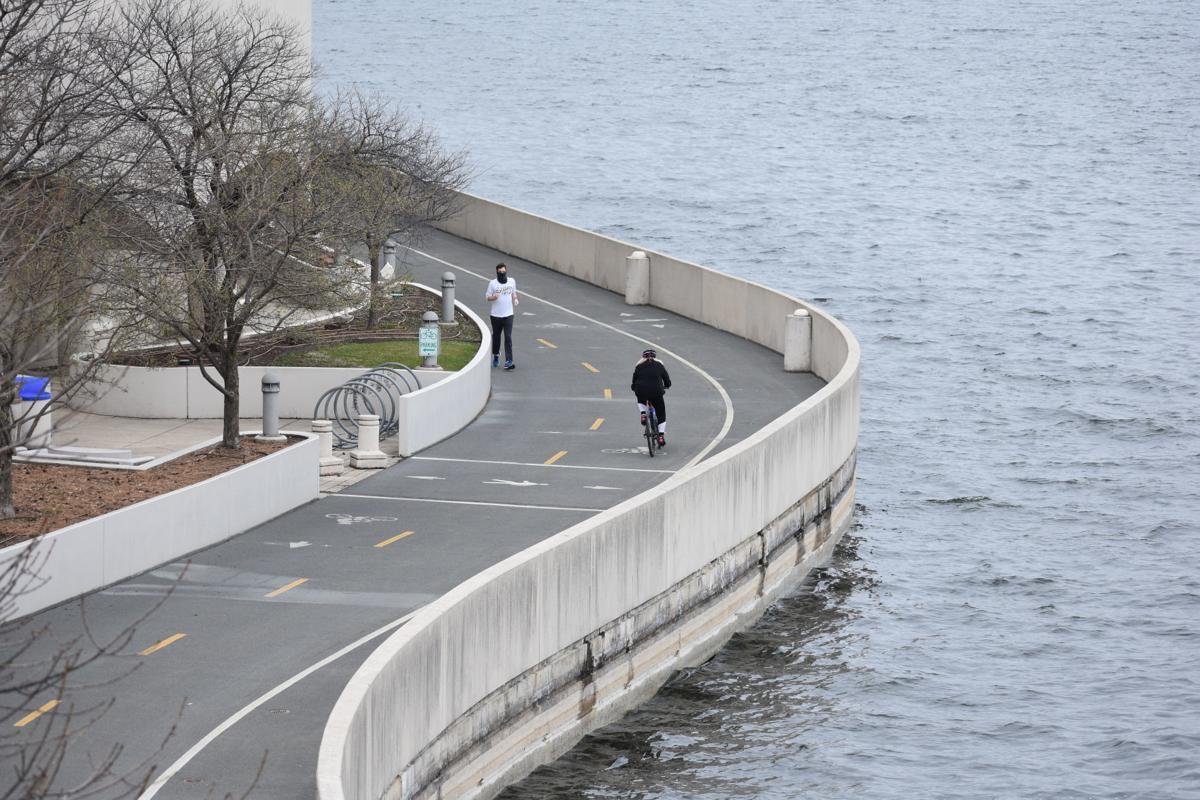 The Capital City Trail along the Monona Terrace waterfront didn't have much traffic during a chilly and overcast Sunday afternoon. But the city is taking steps to help alleviate crowded paths and breakdowns in social distancing during peak times amid the COVID-19 pandemic. 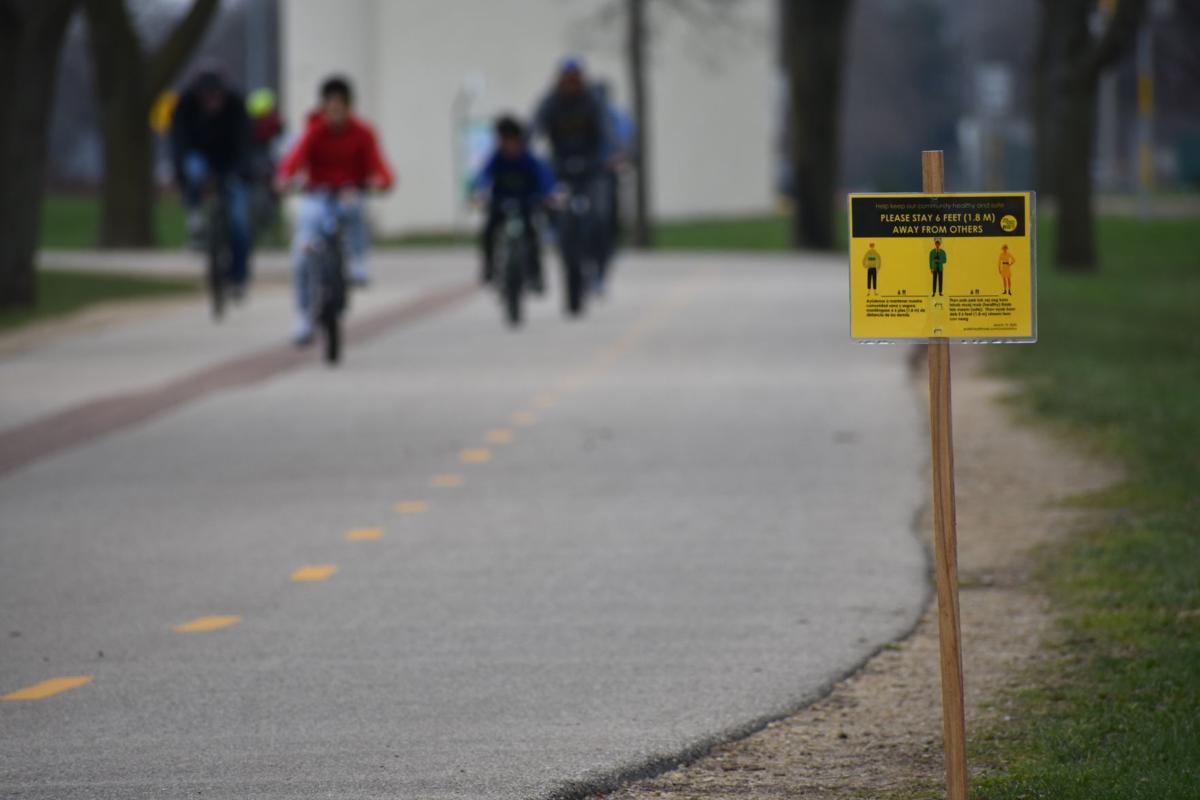 Signs posted along bike paths such as the Capital City Trail urge pedestrians and cyclists to keep at least 6 feet away from each other.

With cabin fever running high during the COVID-19 coronavirus pandemic, some of Madison’s busiest bike paths have recently come to somewhat resemble the Beltline during rush hour.

It’s not that more people are using the paths on a daily basis, said Renee Callaway, the city’s pedestrian bicycle administrator. It’s that everyone is going out around the same time in the afternoon — especially when it’s warm — leading to overcrowded paths and breakdowns in social distancing.

“It isn’t spread out anymore, where there’d be a big bump in the morning when people go to work, and then again in the late afternoon as people are coming home, and there’s more recreational use,” she said. “It’s spring in Wisconsin, right? People are going out during the nicest part of the day because it’s such a treat. Everybody wants to be out at the same time.”

The city has posted signs along arterial paths urging walkers, runners and cyclists to stay at least 6 feet away from each other. Observations of the Capital City Trail along the Monona Terrace waterfront on Saturday afternoon suggested that it’s difficult for path users to maintain the proper distance, however.

“The whole bike path situation is pretty untenable,” she said. “If you can’t maintain a 6-foot distance — and often you can’t because the paths are narrow — then you should avoid going out on them.”

But that doesn’t mean bipedal transportation is off the table; it just has to spread out a little. With the help of Madison Bikes, a nonprofit organization advocating for better conditions for people on bikes, the city is exploring several ways of giving people more space to run, bike, stroll and scoot safely.

The idea is to relieve pressure on existing thoroughfares. For example, repurposing a lane on Atwood Avenue as it runs by Olbrich Park would give cyclists more space on the popular Lake Loop, while also freeing up the sidewalk for pedestrians.

The city is also considering closing a lane on John Nolen Drive, but is still working out the logistics of traffic-control, Yang Tao, city traffic engineer, said in an email to city staff.

Similar lane and parking space closures are being considered throughout Madison, Callaway said. The most easily implemented measures would involve taking roadways that already have low volumes of motorized traffic, such as bike boulevards, and making them “local only.”

“It would be sort of the same as during flooding or construction, where you put barriers up and only allow residents and people making a restaurant delivery on that block,” she said. “Otherwise, you encourage [motorists] not to take that road so people can walk and bike there.”

Gov. Tony Evers’ decision to close 40 state parks will probably put even more pressure on Madison’s shared use paths as the weather warms up, Callaway said, so the city wants to make more room for path users as soon as possible.

The proposal will be discussed during the Transportation Commission’s virtual meeting on Wednesday. If the response is favorable, Callaway said, traffic modifications could begin by the end of the week, and then roll out in phases.

“Though the weather still isn’t too great right now, it’s only going to get better, so we want to start implementing this soon,” she said.

Rainbow flag murals may be front and center this summer

Here’s what Safdar recommends: If a path is crowded, don’t use it. If you’re approaching somebody on the sidewalk and there isn’t enough space, change direction, walk on the grass, or cross the street. And if you’re walking with somebody in your household, go single file rather than side-by-side to provide others with enough room to pass.

“The question has come up whether it’s OK to take a walk with somebody who’s not a member of your family or living with you,” Safdar said, “and I think that’s also problematic because instances may occur where you can’t maintain that social distancing. That’s how transmission happens.”

Getting outside is important for both physical and mental well-being, but observing the 6-foot rule remains a critical public health strategy during the pandemic. That means going for walks or rides only with people in your household, or going alone.

“It’s a balance between getting some exercise and not compromising social distancing,” Safdar said. “But if you have to pick between the two, at the moment the social distancing piece is pretty crucial.”

A wide swath of northern Wisconsin had 6 inches of more of snow in the storm Sunday into Monday, with some reports of more than a foot, according to forecasters.

Many residents still displaced by apartment fire on Madison's Southwest Side

A week after a fire destroyed 24 apartments in the Tucson Trails complex on Madison’s Southwest Side, many of the displaced residents remain in temporary lodgings.

'Nice to get outside': Visitors return to Devil's Lake State Park after weeks-long closure amid COVID-19 pandemic

Devil's Lake was among 34 state parks and forests to reopen with special conditions on Friday as Gov. Tony Evers eases off some COVID-19 restrictions.

Arboretum Drive is being repurposed to give pedestrians and cyclists more space to maintain social distancing.

The Capital City Trail along the Monona Terrace waterfront didn't have much traffic during a chilly and overcast Sunday afternoon. But the city is taking steps to help alleviate crowded paths and breakdowns in social distancing during peak times amid the COVID-19 pandemic.

Signs posted along bike paths such as the Capital City Trail urge pedestrians and cyclists to keep at least 6 feet away from each other.