With absentee ballot requests setting records across Wisconsin and President Donald Trump raising unfounded worries about voting by mail, the city of Madison on Friday installed 14 secure drop boxes around the city where people can drop off their completed absentee ballots.

The blue boxes, emblazoned with Madison’s city flag and the directive “VOTE” in 7-inch-tall letters, were being secured to the ground with bolts at 13 of Madison’s 14 fire stations and the Elver Park shelter.

Only city of Madison residents can use the boxes, which are made with “a minimum of quarter-inch steel” and seams that are “fully welded to prevent damage and tampering,” the Madison City Clerk’s Office said in a statement.

Sworn election officials were to begin picking up ballots from the drop boxes Friday night, and two pick-ups were scheduled at each location at 1 p.m. and 5 p.m. on both Saturday and Sunday. There will be at least one pick-up from each location by 5 p.m. on every day leading up to the election, the clerk’s office said.

The last pick-up will occur by 5 p.m. Nov. 2, the day before the election, and then the slots will be locked. Voters still looking to drop off their absentee ballots after the last collection will need to take them to their polling place on Election Day.

Election officials collecting ballots from the drop boxes will be wearing city of Madison high-visibility vests and name tags, the clerk’s office said, and they will count the ballots they pick up, place them in a bag and secure the bag with a tamper-evident seal.

The drop boxes will be left in place after the election and used for future elections, according to clerk’s office employee Maggie McClain.

She said the boxes cost $52,330 to make and ship. Money for their purchase came from a $1.3 million grant from the Chicago-based nonprofit Center for Tech and Civic Life, which has provided more than $6.3 million to five Wisconsin cities to help administer the Nov. 3 election.

A federal judge on Wednesday rejected a conservative group’s request to block that funding. Wisconsin Voters Alliance and six of its members contended the money constitutes bribery to boost voting in liberal communities and only states have discretion on implementing federal elections.

The city has said the money is needed at a time when the surge in absentee voting and other election-related changes caused by the COVID-19 pandemic have put a strain on clerks’ budgets.

As of Friday, Wisconsin’s clerks had received nearly 1.4 million absentee ballot applications, and 821,300 absentee ballots had been cast. In Dane County, those figures were 204,451 and 135,098, respectively.

In 2016, nearly 3 million people cast ballots in the presidential election in Wisconsin.

Fire Station 2: 421 Grand Canyon Drive, west side of Grand Teton Parkway before the station’s back driveway.

Fire Station 5: 4418 Cottage Grove Road, on Atlas Avenue between the bus stop and the station’s back driveway.

Fire Station 8: 3945 Lien Road, east of station on east side of Parkside Drive.

Fire Station 9: 201 N. Midvale Blvd., behind station on west side of Meadow Lane.

Fire Station 10: 1517 Troy Drive, north side of station near the intersection of Troy Drive and Hanover Street.

Fire Station 11: 4011 Morgan Way behind station on east side of Crossing Place between station driveway and intersection of Crossing and Nelson Road.

Elver Park Shelter: 1250 McKenna Blvd., in island of the circle drive near the park shelter.

Barry Burden and Reid Ribble: Be patient as the votes are carefully counted

Americans tend to believe that presidential elections are resolved on election night, the way the winner of a football game is usually known w…

Warmer to start weekend, then coldest air of season moves into southern Wisconsin

The area will see highs approaching 60 on Saturday before barely getting into the 40s on Sunday, according to forecasters.

The rally is taking place as coronavirus cases soar in Wisconsin.

The local nonprofit was one of four organizations that won awards this year out of nearly 400 nominated over the summer.

With in-person absentee voting able to begin Tuesday, the Madison Clerk's Office will be operating drive-up and outdoor early voting locations at its main office, libraries and college campuses.

The state’s bipartisan elections commission voted unanimously to recommend that counties make clear when posting election results how many absentee ballots are outstanding.

Only about 0.1% of absentee ballots returned as of Tuesday were rejected or still missing information needed to count them. 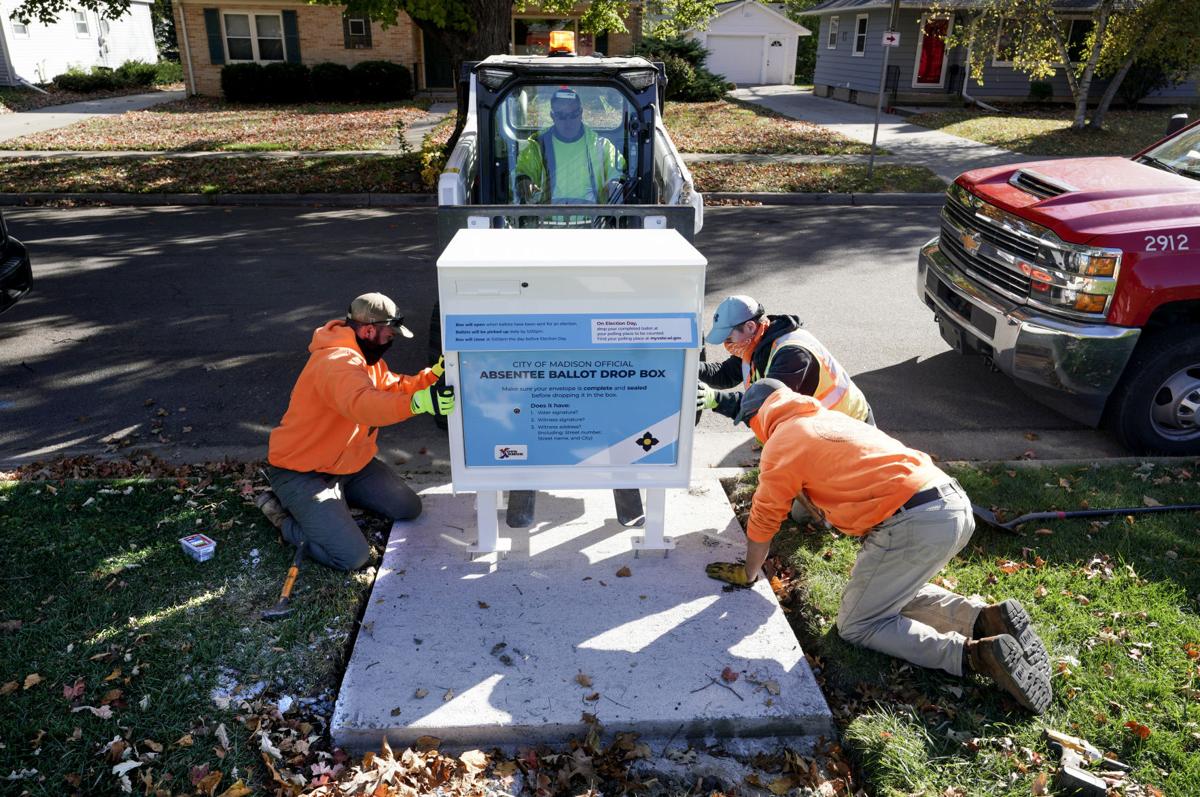 City workers install an absentee ballot drop box at Fire Station 9, 201 N. Midvale Blvd., on Friday. The box is one of 14 secure metal drop boxes installed around the city. All but one, located at Elver Park, is at a fire station. 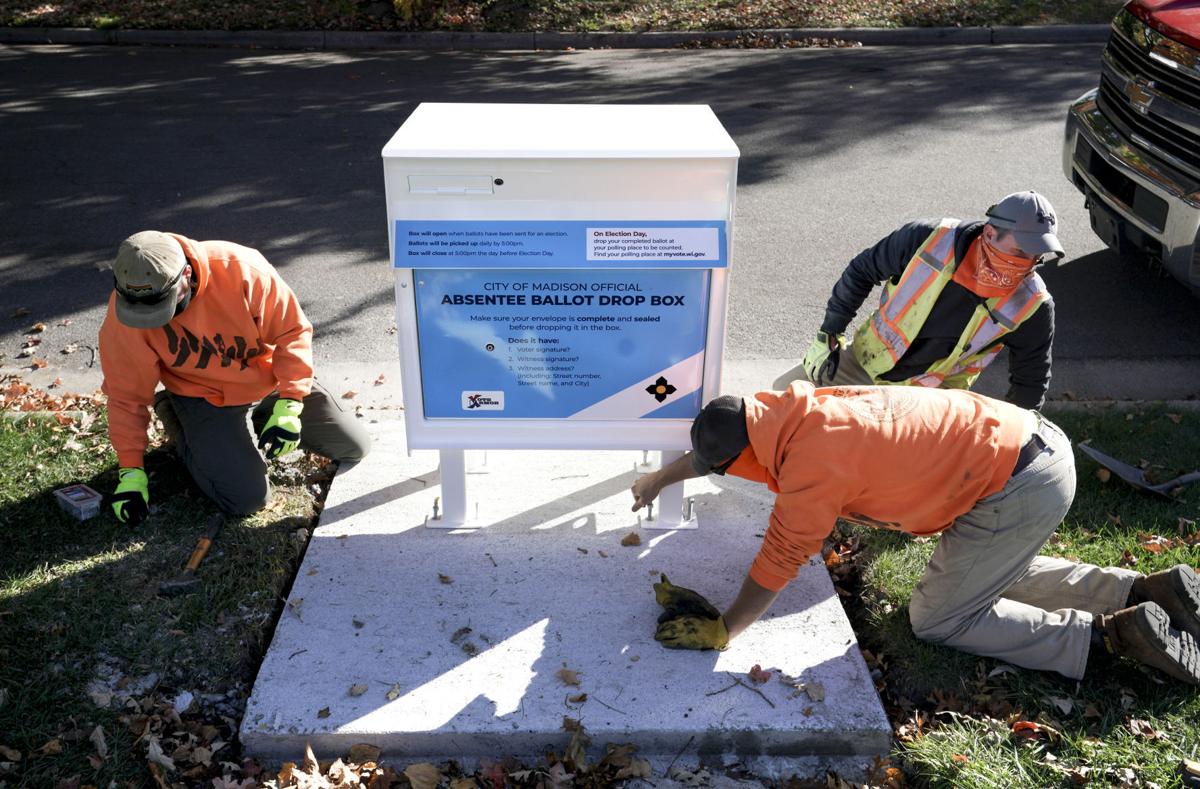 The drop boxes cost $52,330 to make and ship and were paid for with money from a $1.3 million grant from the Chicago-based nonprofit Center for Tech and Civic Life. 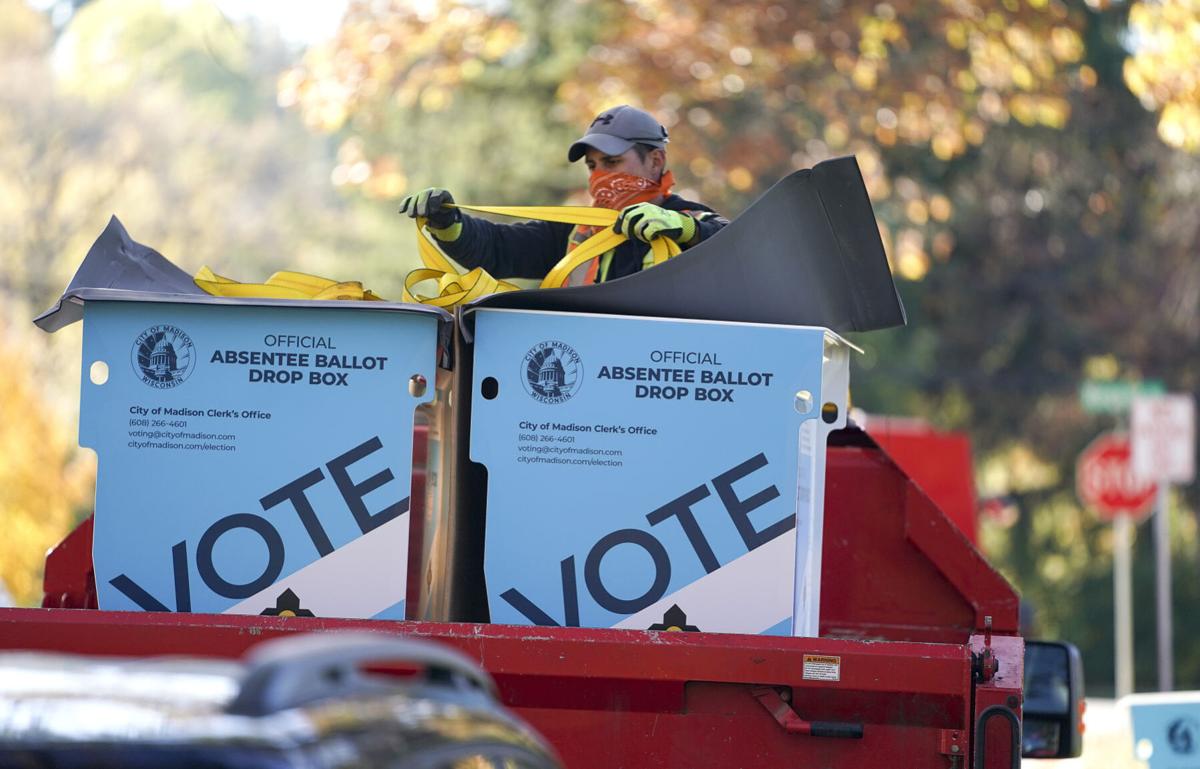 Madison city worker Eric Kuban ties down some of the absentee ballot drop boxes installed Friday around the city. About 135,000 Dane County residents have already submitted their absentee ballots in next month's election.