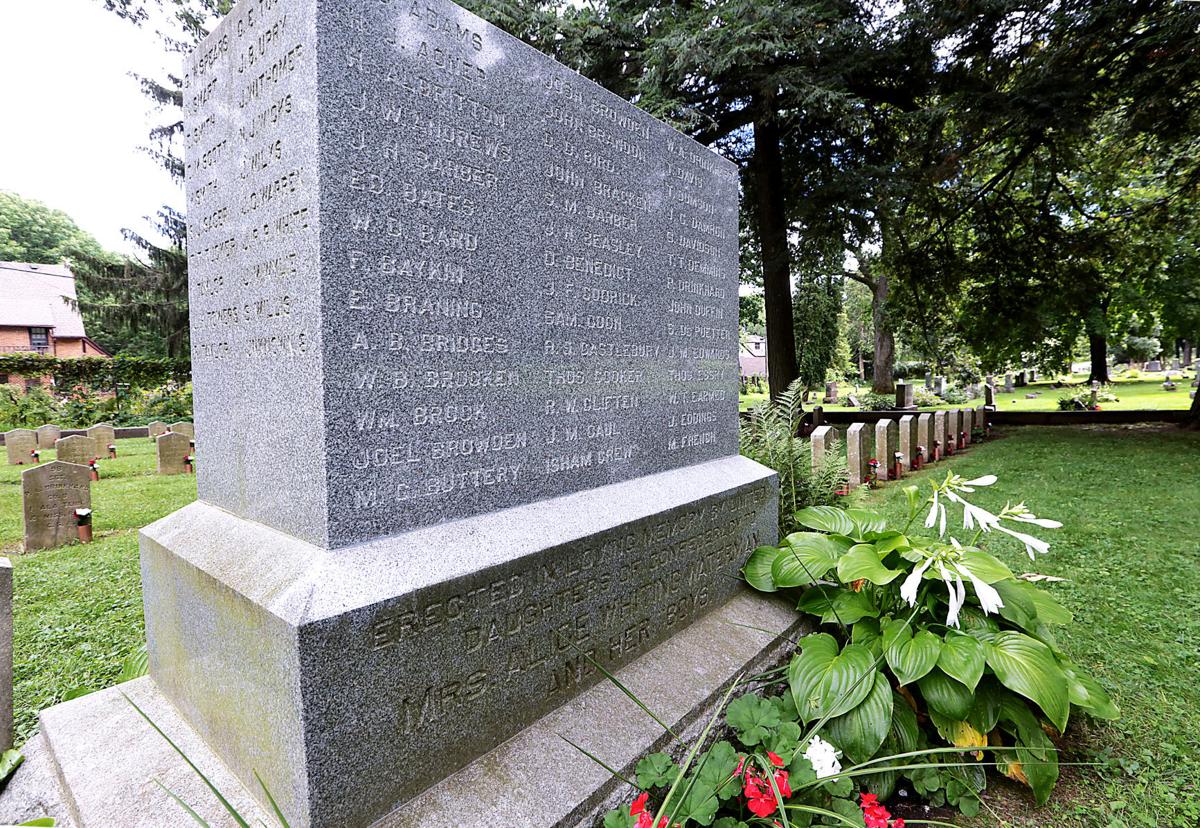 The 1906 stone cenotaph names the 140 Confederate soldiers buried at Forest Hill Cemetery and a woman who took care of their cares. The City Council voted to remove it Tuesday. 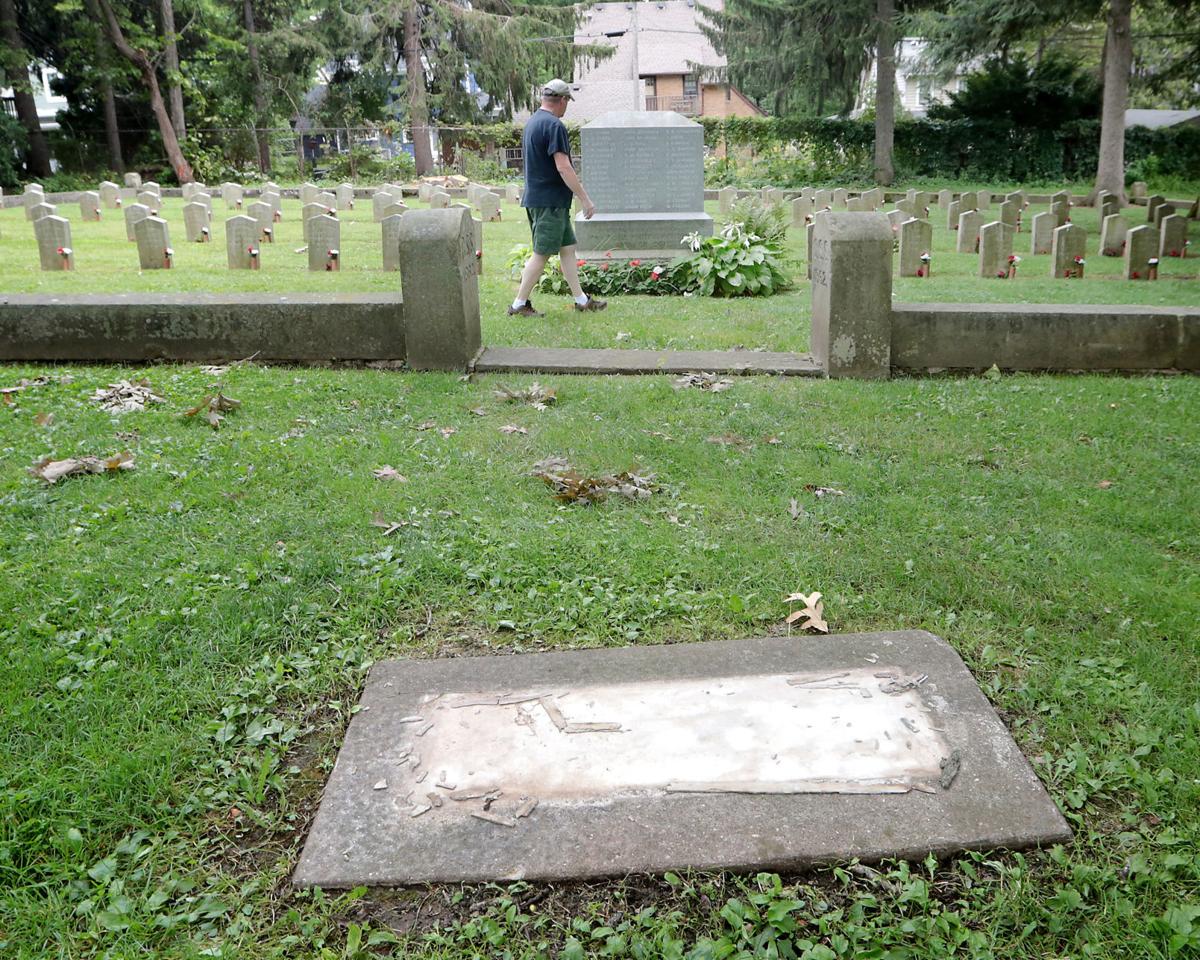 A concrete slab remained where a stone and plaque memorializing the resting place of Confederate soldiers from the Civil War was removed from the Confederate Rest section of Forest Hill Cemetery in August.

Nearly eight months after Mayor Paul Soglin ordered a plaque at the Confederate Rest section to be taken out of the publicly owned cemetery, council members, on a voice vote, unanimously approved taking down a second stone monument, known as a cenotaph, that names the 140 soldiers buried in the northern-most cemetery for Confederate soldiers.

"When I think of the countless slaves that were killed, there was no monument, there was no marker, there was no headstone, and no signs saying who died here," said Ald. Barbara Harrington-McKinney, 1st District.

Council members also voted down 13-5 an amendment by Ald. David Ahrens, 15th District, that would have put an interpretative sign outside the graveyard explaining that the soldiers died as prisoners of war at the Camp Randall military base, as well as the current controversy behind Confederate monuments.

The city's Landmarks and Parks commissions both recommended adding a sign to contextualize the site.

But Ald. Shiva Bidar-Sielaff said people seeking the history of Confederate Rest can find out who is buried there and how the graveyard came to be in ways other than a sign.

"We don't have interpretative signs on all the other things that (are) at Forest Hill Cemetery," Bidar-Sielaff, 5th District, said. "There is plenty of history of Madison that one could have signs for and put in context."

Ultimately, the council decided to go in the direction of the Equal Opportunities Commission, which had recommended removing the cenotaph, while members of Madison's Landmarks and Parks commissions favored leaving it in place.

The cenotaph was installed in 1906 by the United Daughters of the Confederacy -- an organization Soglin has called "racist and bigoted."

Due to a delayed flight, Soglin was absent from the discussion Tuesday night.

"The Daughters of the Confederacy are a pernicious, racist, active group," said Kathleen Nichols, a former Dane County Board supervisor. "It needs to go."

But Madison resident David Blaska said the cenotaph does not glorify the cause of the Confederacy, but rather acts as a way to identify the dead and honor a woman, Alice Whiting Waterman, who maintained the graves and is also buried there.

"We found that the structure does not extol the Confederacy or the secession, but functions as a grave marker," said Landmarks Commission chairman Stu Levitan.

The City Council and the three commissions all agreed that the removed plaque, which was installed in 1981 and describes the dead as "valiant Confederate soldiers" and "unsung heroes," should not be returned to the Near West Side cemetery.

Soglin ordered the plaque be taken out of the cemetery, 1 Speedway Road, after a protest over a Confederate statue in Virginia that involved white supremacists resulted in one counter-protester being killed in August.

"Sometimes I feel a little torn in that these are people who fought for something and they are warriors too, but they were fighting for something that meant that many of us were less than people and less than citizens," said Ald. Arvina Martin, 11th District.

The city will now offer the 1981 plaque and the 1906 cenotaph to the Wisconsin State Historical Society or the Wisconsin Veterans Museum, but not to a private person or private organization.

Advice for Confederate sign: Condemn the sin, if not the long-gone sinners

"The solution is to erect more monuments with different messages."

Madison commissions split on what to do with Confederate cemetery markers

Three Madison commissions have offered split recommendations on what to do with monuments at the Confederate Rest section of the public cemetery.

Dozens showed up Tuesday to voice their opinions on the two monuments, and the three options Mayor Paul Soglin has offered for their future.

On Tuesday, the city's Landmarks, Park and Equal Opportunities commissions will conduct a joint meeting to create a plan for two Confederate monuments at Forest Hill Cemetery on the West Side.

Three city of Madison committees are considering the fate of memorials at the Confederate Rest section of the Forest Hill Cemetery.

The writing on some 25 to 30 of the headstones is illegible or close to it.

OUR VIEW: Removing monument without adding information about rebel soldiers will make it harder to learn from the past

For the first time, two African-American members of the Madison City Council will serve as both the president and vice president.

Recently, the Madison City Council voted to remove the two monuments in the Confederate Rest in Forest Hills Cemetery, even though the Landmar…

Recently, the Madison City Council voted to remove the two monuments in the Confederate Rest in Forest Hills Cemetery, even though the Landmar…

The council voted 14-4 against a motion by Ald. Paul Skidmore to reconsider the monument's removal from the Confederate Rest section of the Forest Hill Cemetery.

"This is nowhere near being done," said Ald. Paul Skidmore.

The Landmarks Commission will meet Monday to discuss whether a Confederate monument in the city-owned cemetery should be removed.

Madison commission punts on whether to remove Confederate monument

Next month the Landmarks Commission will again take up the fate of the monument in Forest Hill Cemetery.

The 1906 stone cenotaph names the 140 Confederate soldiers buried at Forest Hill Cemetery and a woman who took care of their cares. The City Council voted to remove it Tuesday.

A concrete slab remained where a stone and plaque memorializing the resting place of Confederate soldiers from the Civil War was removed from the Confederate Rest section of Forest Hill Cemetery in August.