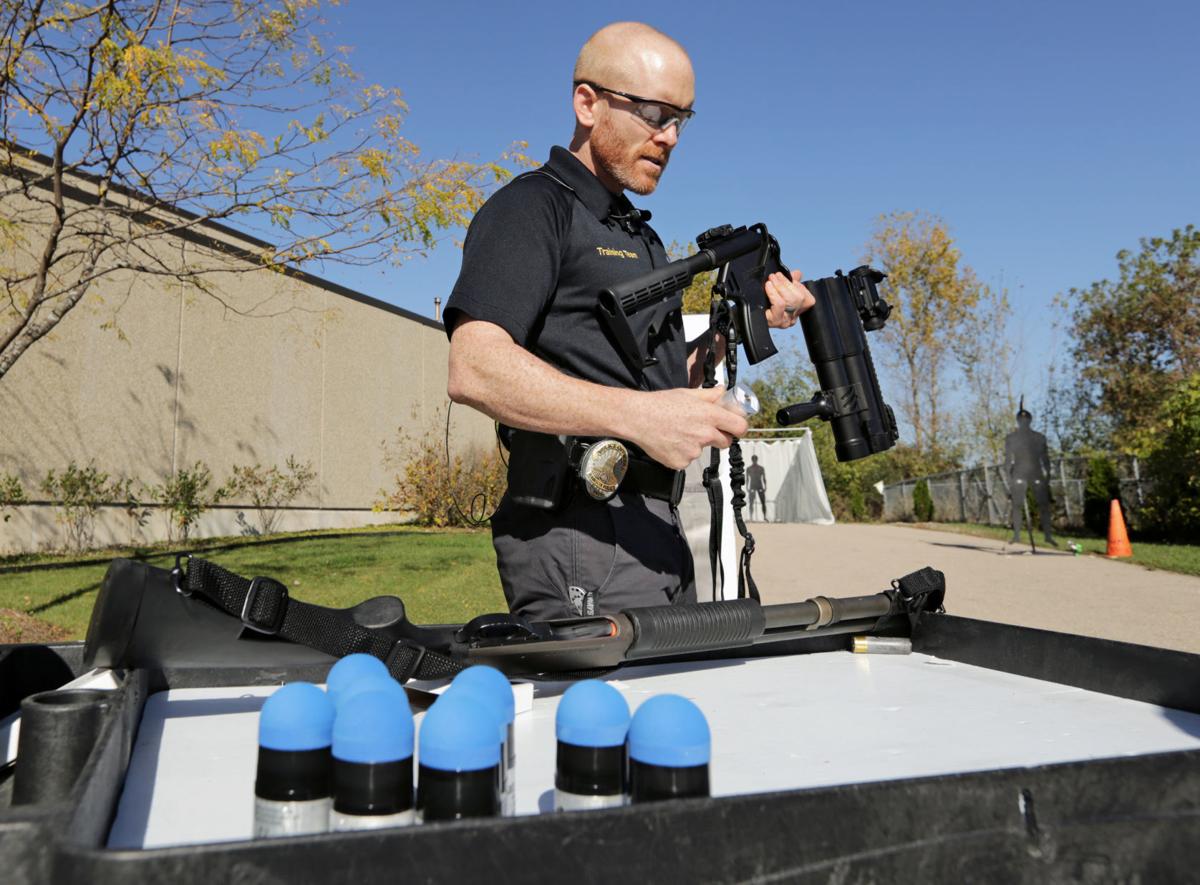 During a demonstration in 2017, police officer Chris Masterson loads a Sage 40mm Deuce Launcher, a repurposed grenade launcher that can fire sponge bullets. 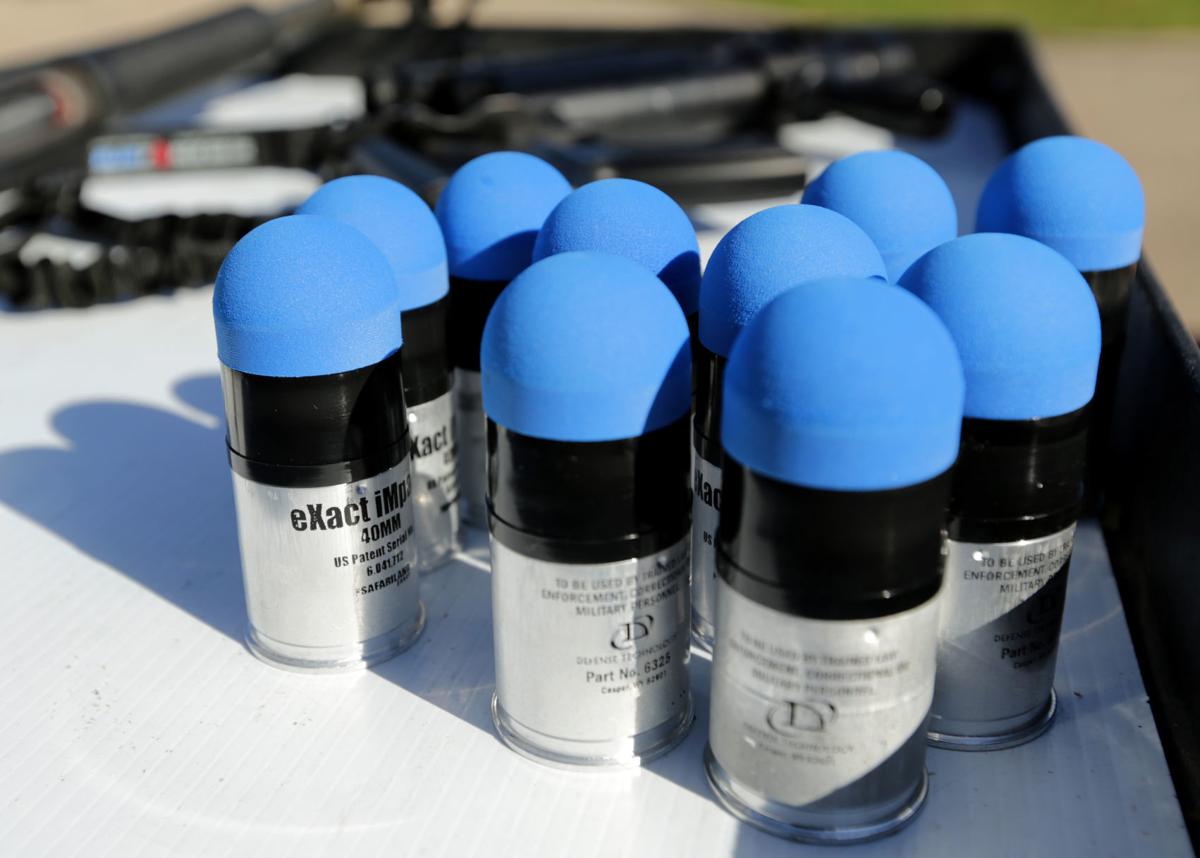 A less-lethal sponge round for a Sage 40mm Deuce Launcher costs the Madison Police Department $26 apiece and can be only used once. They are more accurate and can be fired at a longer range than bean-bag rounds fired from shotguns, according to Madison police.

The Madison City Council on Tuesday unanimously blocked the police department’s request to use $50,000 for certain weapons, including projectile launchers that were used against local protesters.

The council also moved forward on measures that will enhance police oversight. On a 16-4 vote, council members approved a small work group that will craft ordinances to create an independent police monitor position and a civilian oversight board overseeing the police department, with work to be completed by Aug. 4.

The projectile launchers, which a police spokesman said fire sponge rounds, were used against protesters during the unrest and looting Downtown that occurred on May 30 and 31, acting police Chief Vic Wahl said in a June 2 blog post. Police spokesman Joel DeSpain said generally the rounds were used after officers were hit with bottles, rocks and bricks.

Ald. Max Prestigiacomo, 8th District, who proposed the amendment to prevent funding the launchers, said standing against the tools was “showing solidarity with those protesters.”

Prestigiacomo noted that “less lethal,” which is how police and others describe the weapons, does not always mean non-lethal, and said the police department violated its own policies by using the sponge projectiles as a crowd-control measure.

According to the Police Department’s policies, aiming such impact projectiles at someone’s face, head or neck, is considered deadly force. The policies also state that officers are not allowed to use the projectiles to move or disperse crowds unless there is an “imminent risk of harm to officers or citizens.”

Funding for the launchers was part of a resolution that would have moved $125,000 in unused police funds to purchase and install a generator at the East District Police Station for $75,000 and purchase the less-lethal equipment for $50,000. The other equipment would have included Tasers, ammunition and training for new instructors, Wahl said in a statement.

Although the projectile launchers gained attention in recent weeks when used against protesters after demonstrations against the death of George Floyd turned violent, historically they’ve been used as a less harmful option for dangerous incidents in Madison — aimed at stopping a threat while minimizing the risk of serious injury or death.

In 2017, for instance, Madison police used sponge rounds to subdue a suicidal 29-year-old man who confronted officers with the knife he had used to slice his neck. Former Police Chief Mike Koval said at the time that by using the weapon, police saved the man’s life.

The initial funding for the weapons was approved along with the 2020 capital budget in November. Wahl said extra funding was needed to ensure every squad car was equipped with a launcher as part of its “Less Lethal Initiative.”

Wahl said the funding request came after requests from the community for officers to have more force options that reduce the risk of serious injury or death.

The Madison Police Department Policy and Procedure Review Ad Hoc Committee — which spent more than four years reviewing the department’s policies and recommended 177 changes in a report that was accepted by the council in January — had recommended the department get more “less-lethal” tools and training on how to use them. “Kinetic weapons” — guns and launchers that fire projectiles that do not penetrate the skin — were included in the Ad Hoc Committee’s recommendation.

DeSpain said because the department does not use rubber bullets, he could not explain the difference between rubber bullets and the sponge rounds used by Madison police. Rubber bullets are a type of kinetic weapon.

In other cities across the country, the use of rubber bullets and other projectiles has left protesters bruised, bloodied and even permanently blinded in one eye.

According to The Washington Post, “sponge grenades” have foam noses that deform when they hit something.

Getting hit by a sponge round is about the equivalent of getting hit by a baseball traveling at 40 mph, or the speed of a ball thrown by a Little Leaguer, according to an officer who gave a demonstration of the weapons in 2017.

Sponge rounds are more accurate than beanbags and can be fired from 125 feet away instead of the 75 feet range of beanbags.

The two police oversight measures — the police monitor and civilian oversight board — were cornerstone recommendations of the Ad Hoc Committee.

Despite broad support on the council for the monitor and board, a few council members were against the work group because they wanted it to have more members. Alds. Shiva Bidar, Rebecca Kemble and Donna Moreland will serve on the work group to turn the ad hoc committee’s vision into city ordinances and budget amendments.

But Ald. Samba Baldeh, 17th District, said the work group should be expanded to five members so more council members of color could be added. An amendment to expand the group failed because the council wanted to ensure the work is done efficiently.

Alds. Baldeh, Paul Skidmore, Barbara Harrington-McKinney and Sheri Carter voted against the creation of the work group because they were unhappy with how the members were selected.

The measure was originally written to apply only to restaurants, but the council expanded it to include bars, nightclubs, tasting rooms and distilleries.

The goal of the resolution is to allow patrons to enjoy restaurants and bars safely during the COVID-19 pandemic. Indoor capacities at establishments have been limited in Dane County because of the virus.

[Editor's note: This story has been updated to note that Madison police used sponge rounds to help with crowd control after recent protests became violent.]

Highs for the area will be near 90 heading into the weekend, dropping to the lower 80s over the weekend, according to forecasters.

A motorcyclist suffered life-threatening head injuries in a crash with a deer in Dodge County on Tuesday night, authorities reported.

In the wake of the death of George Floyd, a black Minneapolis man who was killed while in police custody, people have held numerous peaceful p…

A potential Madison ordinance that would ban police from obtaining military equipment was delayed so some gear, such as N95 masks, could be allowed.

A 26-year-old man trapped a woman in an elevator, choked her until she blacked out and later held a knife to her throat Downtown Thursday evening, Madison police said.

During a demonstration in 2017, police officer Chris Masterson loads a Sage 40mm Deuce Launcher, a repurposed grenade launcher that can fire sponge bullets.

A less-lethal sponge round for a Sage 40mm Deuce Launcher costs the Madison Police Department $26 apiece and can be only used once. They are more accurate and can be fired at a longer range than bean-bag rounds fired from shotguns, according to Madison police.