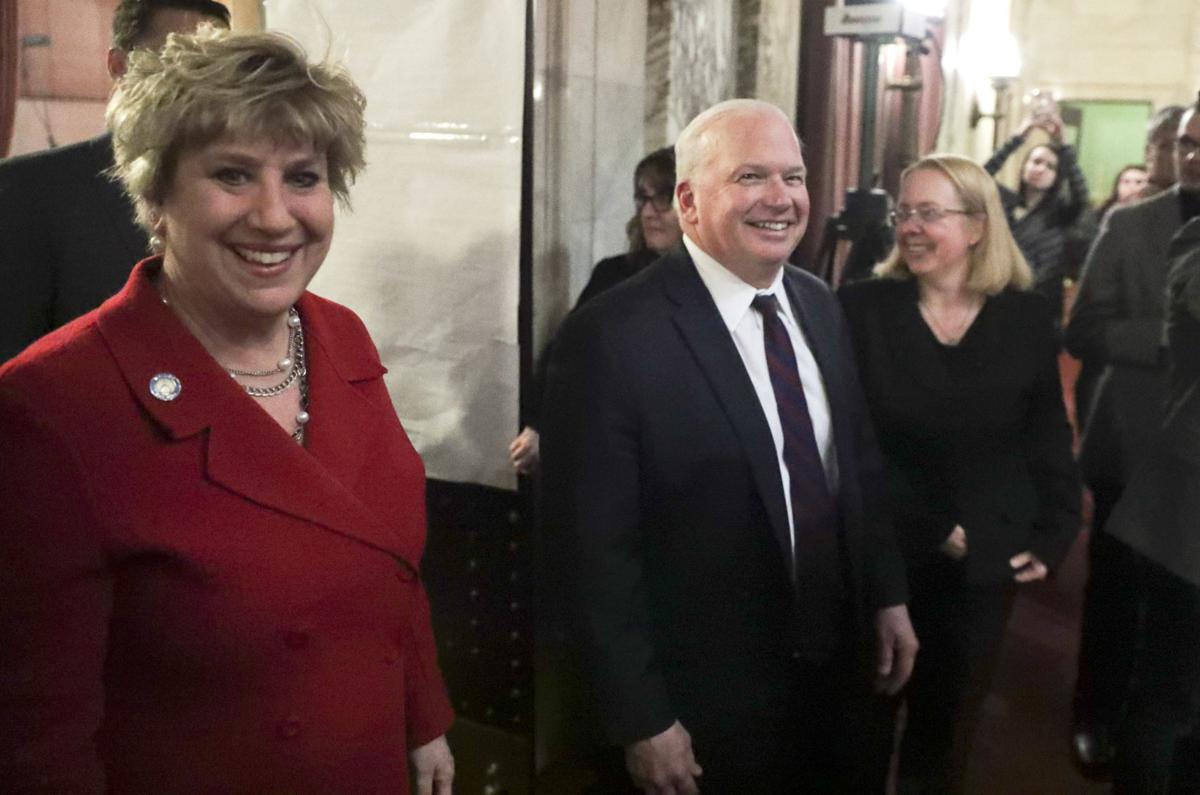 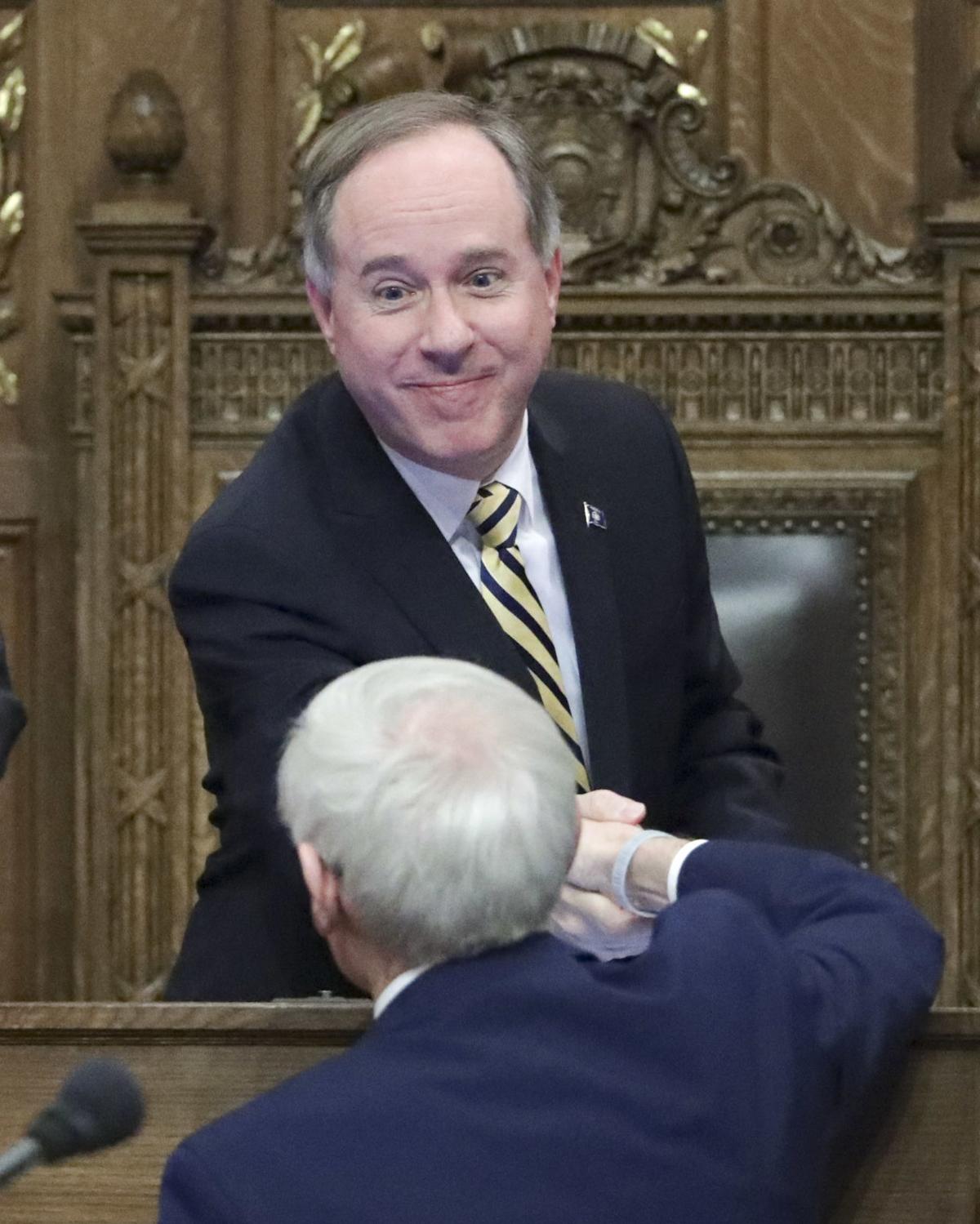 Assembly Speaker Robin Vos, R-Rochester, and other Republicans have expressed support for some of the ideas in Democratic Gov. Tony Evers' budget proposal.

Within minutes of Democratic Gov. Tony Evers’ budget address, Republicans wholesale rejected his proposal, but there are several ideas they have previously supported, leaving room for potential compromise in the state’s first split-government budget deliberations since 2007.

Much of Evers’ $83.5 billion budget proposal is bound to go nowhere in the GOP-controlled Legislature: freezing private voucher school enrollment, restoring funding for Planned Parenthood, issuing driver’s licenses to immigrants in the U.S. illegally and eliminating the “right-to-work” law, among many others.

“The governor is trying to make happy all the Democratic constituency groups that helped him win his election narrowly,” said lobbyist and former Republican Assembly Speaker Scott Jensen. “Unfortunately, that means he’s built a budget that’s a fantasy.”

Republican lawmakers vowed Thursday to craft their own budget, something Evers has previously said could lead to a full veto. But there may be room for compromise on some big-ticket items — namely funding for transportation, public education, clean water protections and a middle-class tax cut.

Evers has proposed raising the gas tax by 8 cents, but wants to offset it by eliminating a Depression-era law requiring retailers to impose a minimum profit markup on fuel, which is currently set at a 9.18 percent markup on the actual cost.

Repealing what’s known as the minimum markup law has been brought up before in the Legislature with free-market conservatives supporting repeal of the law.

A 2017 Assembly Republican proposal to lower the markup to 3 percent failed to win over then-Gov. Scott Walker and some Republicans in the Senate.

Even Senate Minority Leader Jennifer Shilling, D-La Crosse, initially refused to answer a reporter’s question Friday about her position on the repeal, calling the overall transportation plan “a start.”

Jensen said looping the minimum markup in with a gas tax increase is a “smart move” that former Democratic Gov. Jim Doyle had attempted as well. He said a smaller gas tax increase combined with tolling could provide a funding answer.

Tolling doesn’t appear in Evers’ budget, but may show up in the Republican draft. Both Fitzgerald and Assembly Speaker Robin Vos, R-Juneau, said last month that they are warming to the idea of tolling.

Another transportation-related compromise could come from Evers’ proposal to collect hybrid vehicle fees.

The current budget includes a $75 fee on hybrid vehicles, but the way the law defined “hybrid electric vehicle,” has left the Department of Motor Vehicles unable to collect the fee. The law’s reference to a car’s specific battery size excludes most mainstream hybrid cars, such as a Toyota Prius.

The fee passed the Republican-controlled Legislature in 2017. Most of the opposition at the time came from Democrats who said the fee discouraged people from buying clean-energy vehicles. Proponents say the fee is about fairness because hybrid vehicle owners pay less in gas tax, but use the roads as much as less-fuel-efficient vehicles.

Evers’ office estimates collecting the fee would raise nearly $10 million over the biennium.

As the former state superintendent, Evers is seeking major changes to public education, including a revamp of the funding formula for schools and a freeze on voucher program enrollment.

But many of the proposed changes — along with the associated monetary increases — are not expected to be in the Republican version.

“Frankly, I’m not probably going to put a lot of brain cells into memorizing all the different facets of it, because it’s not going anywhere,” said Rep. Jeremy Thiesfeldt, R-Fond du Lac, chairman of the Assembly Education Committee. “We’re going to put something together that actually has some reasonable chances of passing.”

Thiesfeldt said he expects Republicans will support more money for special education and mental health resources for students, just not the $606 million and $64 million increases Evers has offered in those areas, respectively.

“The special education funding has been flat for a long time, and there should be a significant increase there too, but the governor’s talking $600 million,” Thiesfeldt said. “No, that’s just not going to happen. That’s like drawing the arrow straight up on a bar graph.”

Will Flanders, research director at the conservative Wisconsin Institute for Law & Liberty, which does advocacy work around education, said he also sees “some support across the board for increases on special needs.”

Vos has said there is support among Republicans for the state to cover two-thirds of the cost of education, which Evers is pushing.

“If we can afford to do something like that then we should look to do that,” Thiesfeldt said, adding he would oppose making it statutorily required.

Under the previous definition of the now defunct two-thirds funding commitment, which leaves out federal money and some non-property tax local funding in the calculation, Wisconsin is a little more than 1 percentage point from hitting that goal with the state covering 65.4 percent of school funding across Wisconsin in 2018-19, according to the Legislative Fiscal Bureau.

The average over the past 10 years has been 63.1 percent.

Evers is also proposing a funding formula change that would provide a base $3,000 per student and take poverty into account, along with $618.8 million more for the state’s general aid.

While Thiesfeldt said it’s worth exploring whether to factor in poverty when calculating school aid, he does not expect major changes to the formula.

Both Evers and Republicans want to cut income taxes for the middle class by 10 percent. The trouble is how to fund it.

Evers’ plan would offer a 10 percent tax cut to working- and middle-class filers, while increasing taxes for manufacturers making more than $300,000 annually and rolling back tax benefits on capital gains.

The GOP lawmakers’ proposal is similar, but isn’t offset by an increase in taxes elsewhere, so their cut would draw down the state’s general fund reserves, which Evers says isn’t sustainable. His first veto as governor was of the Republicans’ standalone tax cut bill.

After the veto, Vos said it was “too soon to tell” whether Republicans will attempt another effort to pass a middle-class tax cut.

Jensen said he expects Republicans will put an income tax cut in their version of the budget, but they won’t raise taxes to do so.

Under Walker, Department of Natural Resources spending was typically among the most controversial in the state budget. Walker’s DNR budgets were flashpoints as he cut the agency, eliminated scientific research on climate change and reduced enforcement of pollution laws.

There are reasons to believe many of Evers’ proposals to protect water quality and improve outdoor recreation may win approval from the Legislature, said George Meyer, executive director of the Wisconsin Wildlife Federation.

“Gov. Walker was the most difficult part,” Meyer said.

“Speaker Vos does polling too, and the numbers in support of clean water and clean fresh streams are at the 80 percent level, and for drinking water maybe even higher,” Meyer said.

Vos announced a task force on water quality after research found 42 percent of tested wells in southwest Wisconsin were contaminated and Republican lawmakers who represented the area raised alarm.

Cowles said through a spokesman Friday that he hasn’t yet ruled out any of Evers’ natural resources proposals.

Evers has called for closing the so-called “dark store loophole,” which Republican-backed proposals attempted to do in 2017. The proposal would increase how much mega-retailers pay local communities in property taxes, possibly lowering the tax burden on homeowners.

But even with bipartisan support, Republican leadership declined to bring the bill to the floor for a vote amid opposition from Wisconsin Manufacturers & Commerce, the powerful state business lobby .

In the November election, voters in 23 Wisconsin municipalities overwhelmingly backed nonbinding referendums to close the loophole.

Evers’ budget also provides $78 million for expansion of broadband internet with a statewide goal of 25 Mbps minimum download speed. Broadband expansion, particularly in rural areas, is one of many priorities listed in the Assembly Republicans’ 2016 agenda.

And Evers’ homelessness prevention initiatives mirror both a series of Republican bills introduced last month and what a council called for last fall. The council, established with bipartisan support during Walker’s administration, will now be led by Evers.

Another possible area of agreement is in law enforcement. The number of assistant district attorneys has been virtually stagnant for at least a decade.

A request for 106 positions in the 2017-19 budget went unfulfilled, with Walker instead giving assistant district attorneys about a $2-per-hour raise in each of the two years.

The governor calls for raising the gas tax by 8 cents and undoing several laws put in place by his predecessor.

Gov. Tony Evers is looking to revamp the funding formula for the state general aid and increase special education funding by $606 million as part of his two-year education spending package.

The new rule prevents clinic providers that receive Title X funding from referring a patient for an abortion, even if the patient requests it.

Carolyn Stanford Taylor grew up in the segregated South before rising to become Wisconsin's top educator.

If lawmakers approved the measure, Wisconsin would join 12 other states and the District of Columbia in making immigrants living in the country illegally eligible for driver's licenses.

GOP leader: State Senate eyeing $200-per-pupil increase in each of next two years

The increase, if approved, would amount to roughly $500 million more in state aid for school districts.

Assembly Speaker Robin Vos, R-Rochester, and other Republicans have expressed support for some of the ideas in Democratic Gov. Tony Evers' budget proposal.