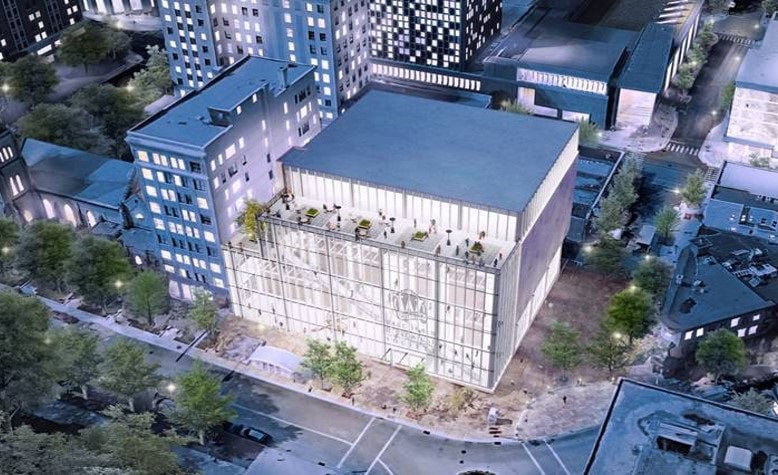 A preliminary concept for the new Wisconsin Historical Society Museum.

With a prominent site at the top of State Street, the Wisconsin Historical Society’s early concepts for a new $120 million museum envision a stylish four-story structure with a glass facade and rooftop deck offering sweeping views of the Capitol.

What’s coming inside the 100,000-square-foot structure may be even more impressive, more than doubling the exhibition space of the existing museum at 30 N. Carroll St. that will be razed for the project, delivering state-of-the-art technology for greater access to the society’s vast collection when it opens in 2026.

More than 200,000 visitors annually are expected to enter spaces that promise to engage the senses through rotating art, objects and images, soundscapes from state and national musicians, and regional food and beverage tastings, officials said.

“The new history museum will highlight stories that connect individuals and communities to our region, the nation and the world,” said Christian Overland, the Ruth and Hartley Barker director and CEO of the Wisconsin Historical Society.

The long-imagined museum has never been closer to becoming a reality.

On Thursday the society announced it would demolish its current undersized museum and adjacent properties owned by Fred and Mary Mohs at 20 and 22 N. Carroll St. for the new facility. The Mohses are selling the properties at below-market rates to the Wisconsin Historical Foundation, which will donate them to the Historical Society for construction of the long-anticipated project.

Financing for the new museum is also now set.

In 2018, the state notified the Historical Society that if it could raise $30 million, the state would deliver the remaining $70 million for the museum. The larger $120 million sum includes transition costs and an endowment.

New commitments from philanthropists Jerome Frautschi and Pleasant Rowland, which bring their combined gifts to $16.6 million, have pushed total private fundraising to $34.9 million, exceeding the amount the society needed to raise to release the state funds.

“Thanks to the generosity of Pleasant and Jerry, we are once again indebted to them for their incredible support of Wisconsin’s history museum project,” said Julie Lussier, Wisconsin Historical Foundation executive director.

The Historical Society, established in 1846, has one of the nation’s largest collections of North American historical assets and operates 12 museums and sites. But its flagship museum has been housed in the undersized, 42,000-square-foot former Wolff Kubly hardware store building at 30 N. Carroll St. since the mid-1980s.

Supporters have envisioned a new museum for more than two decades.

The Historical Society, the Mohses and developer Hovde Properties, which owns the historic Churchill Building, 16 N. Carroll St., and other properties on the block, had long seen their holdings as the site for a joint redevelopment with a new museum and private spaces that could have been the largest project in city history with total costs approaching $255 million.

But the fate of the nine-story Churchill Building, the city’s first “skyscraper” built in the neoclassical revival style in 1915, had been controversial. In early 2018, the Madison Trust for Historic Preservation submitted a landmark nomination for the building, but withdrew it after learning it could cause major complications for the museum project.

In January, the state announced it was moving the preferred site of the proposed museum from the top of State Street to a full block that now features a massive state office building bounded by the 200 blocks of East Washington Avenue and East Main Street, and the 10 blocks of South Butler and Webster streets. In late May, the state announced the Wisconsin Veterans Museum, now located in leased space in a building at 30 W. Mifflin St., would be joining the redevelopment.

At that time, Gov. Tony Evers also unveiled a “Vision 2030” strategic plan that envisioned the two museums moving to the new site and being part of a $276.8 million redevelopment that would also include a six-story state office tower as part of a larger plan for state facilities.

But in late June, the state Republican-authored budget blocked those plans, directing the Historical Society to find another location while taking no action — essentially a “no” — on a new Veterans Museum in the biennial budget.

Then, the society pivoted back to Capitol Square.

“They do have historic value as being structures that have been located on the Square for over a century, which makes them a part of the historic vernacular landscape of our Downtown business district,” she said. “Both buildings were designed by Gordon and Paunack, architects who did several commercial structures Downtown at the turn of the century, including the Fess Hotel, now the Great Dane.”

The society has not revealed the dollar value of the discounted sale of the properties and did not disclose the purchase price.

“Terms of the transaction are not disclosed and the value has not been finalized,” society spokeswoman Kara O’Keeffe said. “More detail will be provided when finalized later this year.”

Downtown Ald. Mike Verveer, 4th District, cheered the new plans. “I’m absolutely thrilled the third time is the charm here and that the museum will remain on Capitol Square where it belongs,” he said.

Verveer said the Veterans Museum has hired a consultant to explore future options, but that the museum will likely be staying at its present site.

“We continue to be supportive of each other’s missions, priorities and programs and look forward to our ongoing collaboration at the State Archives Preservation Facility, school group tours and other joint efforts,” O’Keeffe said.

Hovde Properties still owns the Churchill Building, 16 N. Carroll St., which will be next to the new museum, and a row of long vacant buildings at 119, 121, 123, and 125 W. Mifflin St. once envisioned to be part of the museum and private redevelopment. A spokesperson for the company could not be reached.

In the last year or so, Hovde has spoken about the potential of a scaled-back private redevelopment of its properties on the 100 block of West Mifflin Street, Verveer said.

Hovde does not own the Silver Dollar Tavern, 117 W. Mifflin St., which rests between the Hovde and museum properties.

With its site and financing secure, the Historical Society will immediately begin a search for architectural and exhibit design firms, officials said.

The society’s conceptual design show the glass facade with an interior atrium featuring staircases and walkways with views to Capitol Square.

Previously, society officials have said that modern museums prefer a horizontal rather than vertical design, which were advantages for the larger project site at the top of State Street and the state property on the 200 block of East Washington Avenue. A four-story structure will require a different approach for visitor circulation, O’Keeffe said.

Verveer said the preliminary concepts are “what people will expect and frankly demand” of a new museum, and that he anticipates no unreasonable delays once the final plans begin moving through the city’s land use approval process.

The museum’s interior would offer more than 30,000 square feet of exhibit space, modern visitor amenities such as a restaurant or café, classrooms for teachers, and large spaces for community gatherings and public programming, officials said.

The museum, through exhibitions and programs aimed at all ages, will share wide-ranging perspectives from the past and present and bring historical context to an expansive and ever-growing American history collection of national significance, they said.

It will house permanent and temporary galleries that will allow the society to present stories for local, regional and national audiences. It will be a regional learning hub, emerging as a leading history experience in the Midwest, they said.

“We are ecstatic to be able to keep our commitment to our residents and we are grateful for the support and enthusiasm from the state, donors, and communities throughout Wisconsin and the nation to open a new museum in 2026,” Overland said.

Billed as a temporary shelter solution, the council voted Tuesday to buy a vacant big-box store at 2002 Zeier Road after a previous attempt on the property failed.

A preliminary concept for the new Wisconsin Historical Society Museum. 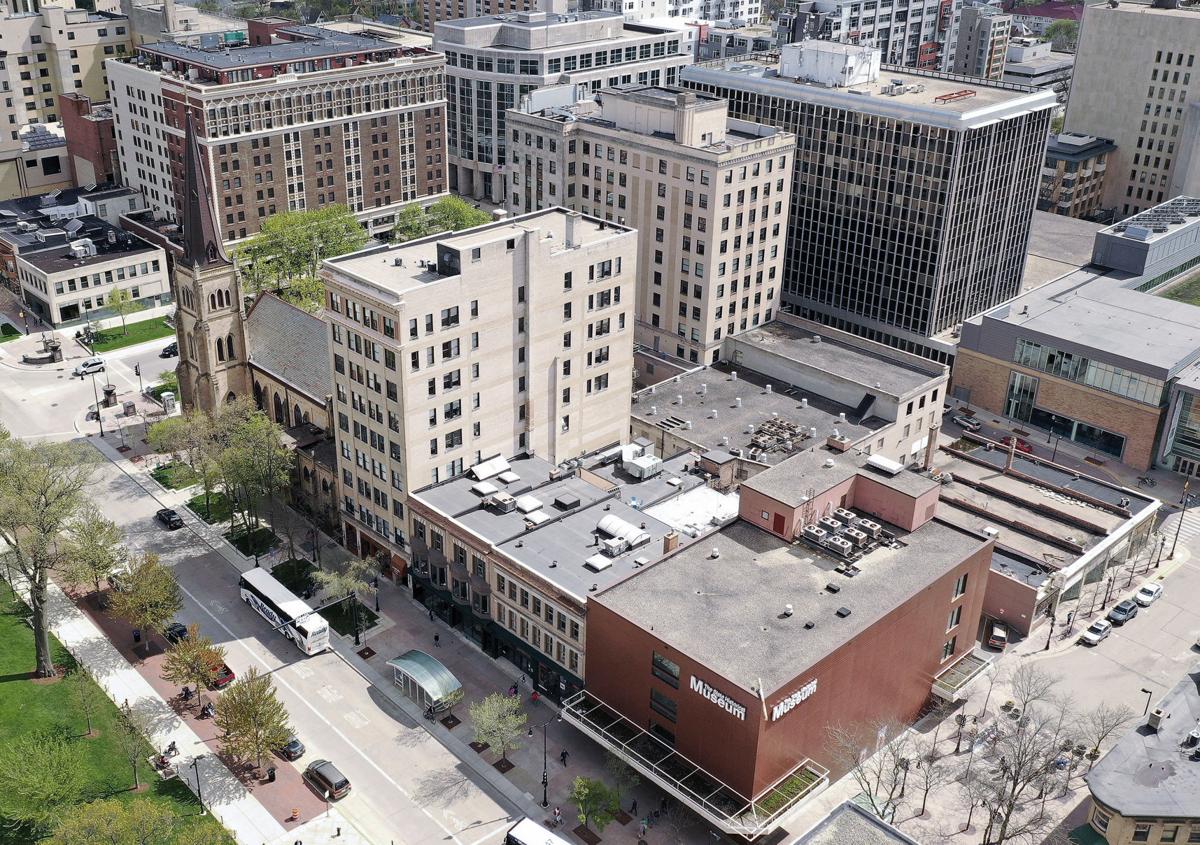 The Wisconsin Historical Society intends to develop a new museum at its current site, bottom center, and two properties to the left at 20 and 22 N. Carroll St. The landmark Grace Episcopal Church, upper left, the nine-story Churchill Building next to the church, the Hovde tower, center rear, and properties to the right are not part of the project site. 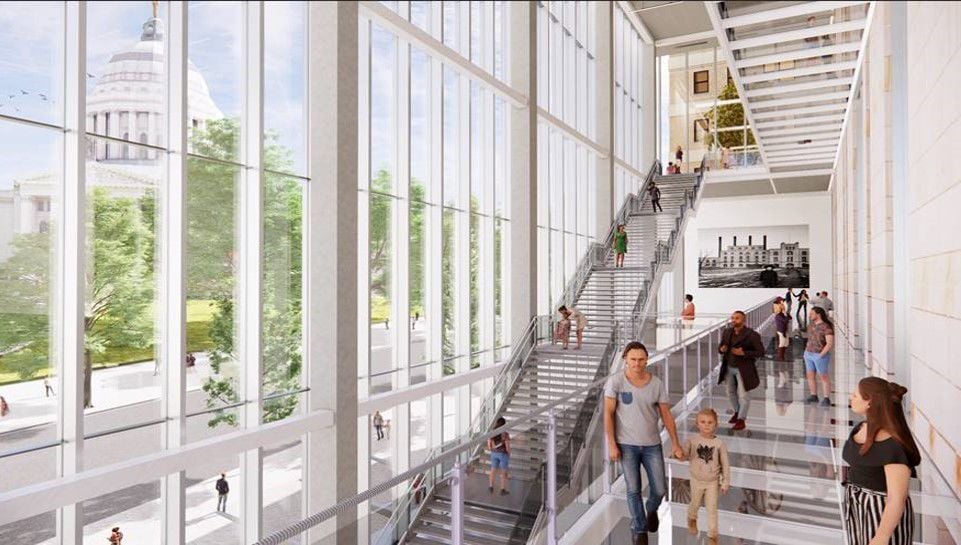 The interior of the Wisconsin Historical Society Museum would feature an atrium offering broad views to Capitol Square. 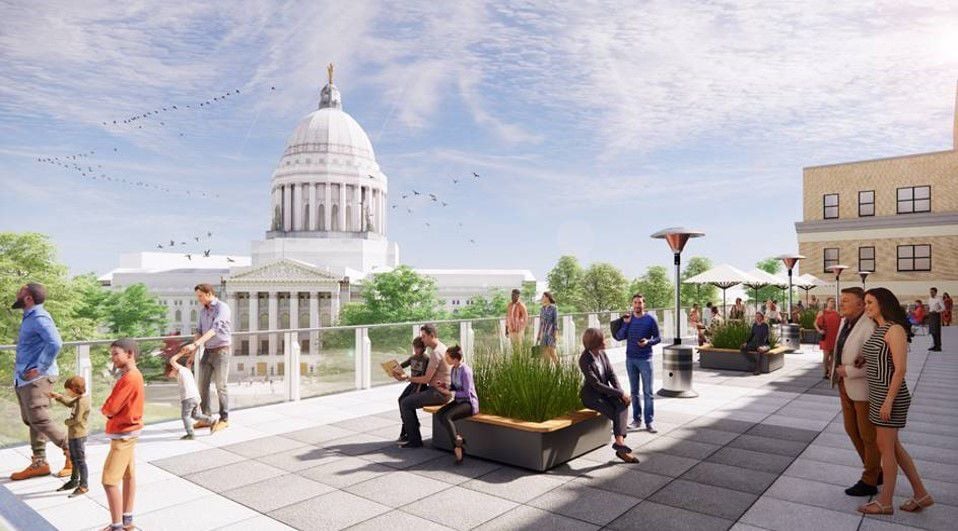 The museum's rooftop terrace would provide gathering space with views of Capitol Square.