After decades of neglect, a short stretch of busy South Park Street is under major development pressure, creating strains among developers, residents and city officials.

In the past few years, developers have proposed multiple projects bringing tens of millions in investment, housing and commercial space for the roughly five-block strip of South Park Street between Haywood Drive and Spruce Street, part of a stretch dubbed by locals as the “Little Isthmus.”

Broadly, the Bay Creek neighborhood welcomes investment provided it respects the character and quality of life in the area. But some residents have found four recent proposals too tall, too big or in the wrong spot.

“The city seems to have an East Washington Avenue vision,” said Steve Davis, co-chair of the Bay Creek Neighborhood Association’s Planning and Economic Development Committee, referring to the boom of massive buildings east of the Capitol. “But it’s not like East Washington. It’s more like Monroe Street, Atwood Avenue and Williamson Street. There’s trepidation the city has a vision for this corridor that’s incompatible with the existing neighborhood.”

City officials see a delicate balance in redeveloping a critical city gateway with needed housing and commercial uses while protecting what’s important to the existing neighborhood, which snuggles close to South Park Street with many single-family homes only a lot or two away from the thoroughfare.

“We definitely recognize this is a critical transportation corridor, and one of the big challenges is the depth of the lots up for redevelopment,” said city Planning Division director Heather Stouder. “The neighborhood is well organized. They care greatly about their quality of life. That’s good.”

The stretch of street peppered with mostly one- and two-story buildings had long become tired and worn. The sprawling Bancroft Dairy opened at the intersection of Fish Hatchery Road and South Park Street in the 1920s and was mothballed in 2004, for years a hulking symbol of decay.

But city officials, developers and residents knew change would come, with plans and zoning anticipating taller and more massive buildings along the street.

“It’s going to be an area of opportunity developers are interested in,” said Ald. Sara Eskrich, 13th District, who represents the neighborhood and tried to balance competing redevelopment interests in other parts of her district, including Monroe and Regent streets.

“I viewed this as a redevelopment opportunity 10 years ago,” said Jacob Klein of JT Klein Co., who is now building a large mixed-use project on the 800 block of the street after a difficult review process. “It was just kind of a natural progression of how things were going to go.”

First, the $25.2 million, four-story Wingra Family Medical Center opened on part of the former dairy site near the intersection of Fish Hatchery Road and South Park Street in 2013.

Terrence Wall, whose T. Wall Enterprises has built mixed-use projects throughout the metro area, envisioned a mixed-use project at the tip of that intersection but first opened the 67-unit Wingra Point apartments on a former parking lot across Fish Hatchery Road from the former dairy in 2014. “Nobody would touch any of this area,” Wall said.

But now projects bringing housing, shops and offices — and their traffic, parking and other challenges — are coming fast to an affordable, safe and stable neighborhood, said Carrie Rothburd, co-chair of the neighborhood association’s Planning and Economic Development Committee.

“As a neighborhood, we are nervous about the very quick steps,” she said.

The city’s plans and zoning essentially allow developers to build up to three stories as a matter of right, with heights up to six stories allowed if certain criteria such as high quality architecture are met, Stouder said. The height and bulk that’s appropriate for a project depends greatly on the size and depth of the building lot and what’s near it, and how sensitive the proposed structure is to its surroundings, she said.

Generally, Davis and Rothburd said three stories are most appropriate on the east side of the street, where single-family homes are closest to commercial lots fronting the thoroughfare. Four stories more appropriate for the west side, with stepped-down stories to residential areas.

Eskrich said alliances can change from project to project and she tries to assess the sentiment of all residents best as possible. “I get split opinions on every single project in the area,” she said. “(But) we can’t have processes that go on and on and on so only the loudest voices are heard.”

With Klein’s project now rising, interest is focused on Wall’s third try for a roughly $25 million mixed-use project for the corner of Fish Hatchery Road and South Park Street, Heartland Housing’s $10.9 million, four-story proposal to build permanent housing for the homeless with support services on the 1200 block and Sue Jiang’s proposal for housing and commercial space to replace the Jade Garden restaurant and adjacent lots on the 1100 block of South Park Street.

Wall, who had received approvals for a plan with five stories at the corner in 2015, has had to make changes due to costs requiring new approvals and has struggled to please all sides, with the city wanting something more consequential on the corner and more commercial space and residents wanting more modest height and bulk.

“It’s like design by committee,” Wall said. “This is total insanity.”

Jiang has made revisions to an original proposal, which Davis described as “trying to fit an elephant into a bathtub,” but her latest $8 million, four-story version was still unacceptable to neighbors who voiced concern about shadows and other issues from a structure they feared would loom over their homes. It didn’t pass the city’s Urban Design Commission’s muster.

Jiang said she’s taking one more look at options but is close to giving up, saying a three-story project does not seem economically feasible. “I’m deeply disappointed,” she said. “They don’t care if you financially can make it.”

Heartland, which responded to a city request for proposals to create housing at 1202 S. Park St., is only beginning to interact with the neighborhood on the project.

“We think it’s a good site,” Nadia Underhill, Heartland’s director of real estate development, said of the parcel’s proximity to bus routes, shopping and other amenities.

Residents, who largely seem to be embracing housing for the homeless, with some even forming a reading group to familiarize themselves with the topic, are concerned about placing the project at the tricky intersection of South Park Street and Olin Avenue and would prefer it be located a bit further south.

820 S. Park St.: JT Klein Co. won approvals and is building a $21 million mixed-use, project called 8Twenty that covers most of a city block. It includes two large buildings, the tallest at five stories, with 95 housing units, including 82 for those with low incomes, and 2,000 square feet of commercial space. The project is also building five single-family homes along South Brooks Street.

1004 S. Park St.: T. Wall Enterprises is preparing to offer a third incarnation of mixed-use project for the tip of the triangular site at the intersection of Fish Hatchery Road and South Park Street. The latest plans call for a roughly $25 million, five-story, mixed-use building with 15,000 square feet of first-floor commercial space at the corner. The building would be three and four stories at its south end and hold 159 market-rate apartments.

Wall's original plan, approved in 2015, called for a building of mainly five floors with 164 apartments, five live-work spaces, 6,000 square feet of commercial space and two levels of parking with 174 stalls. Last November, Wall downsized the project after bidding on the original design came in over budget. Wall proposed buildings of three to four stories with 156 apartments, five live-work units, 1,965 square feet of commercial space and one level of underground parking with 156 spaces.

1109 S. Park St.: Sue Jiang proposed to demolish the Jade Garden restaurant and three adjacent buildings for an $8 million, four-story, mixed-use building with 8,762 square feet of commercial space on the first floor topped by 38 market-rate rental apartments. The Urban Design Commission referred the project proposal so Jiang can scale it back. She is making a final attempt to revise the project.

1202 S. Park St.: Heartland Housing is proposing to demolish a vacant building and replace it with a $10.9 million, four-story building offering 60 units of housing with support services for homeless singles with some units for couples. The project review is just starting.

T. Wall Enterprises is seeking to reduce the height, number of apartments and commercial space in an already-approved plan for the 1.6-acre, triangular corner site at Fish Hatchery Road and South Park Street.

You'd think a minority-owned business designed to provide opportunities to minorities would be a slam-dunk.

A proposed four-story development on South Park Street is facing opposition from residents worried about its impact on the largely residential area, prompting the developer to reconsider pursuing the plan.

The public meeting is the first of three in the coming months to address property zoning and urban design in that area.

After years of effort, the city is selling its first chunk of property to a business intending to locate in the long-dormant, BioAg Gateway, a 28.6-acre industrial park once but no longer seen as a home for agricultural entrepreneurs and research.

The Madison Plan Commission approved Monday the demolition of a South Park Street building that has been slated for a homeless housing project, but the future of the project in doubt over its financing.

A plan to build a mixed-used building at a prominent South Side intersection is being held up after members of the Madison Plan Commission were not satisfied with the proposal Monday.

The city and residents are now preparing for a number of projects that will dramatically transform the triangle-shaped 64 acres along South Park Street.

Urban Land Interests is proposing to demolish the Associated Bank building, 1720 Monroe St., for new construction that would offer 16,000 square feet of first-floor retail space topped by up to 68 apartments.

"I think we've responded to the concerns of the neighborhood and hoping it fits well," said Dave Diamond, president of Walter Wayne Development. 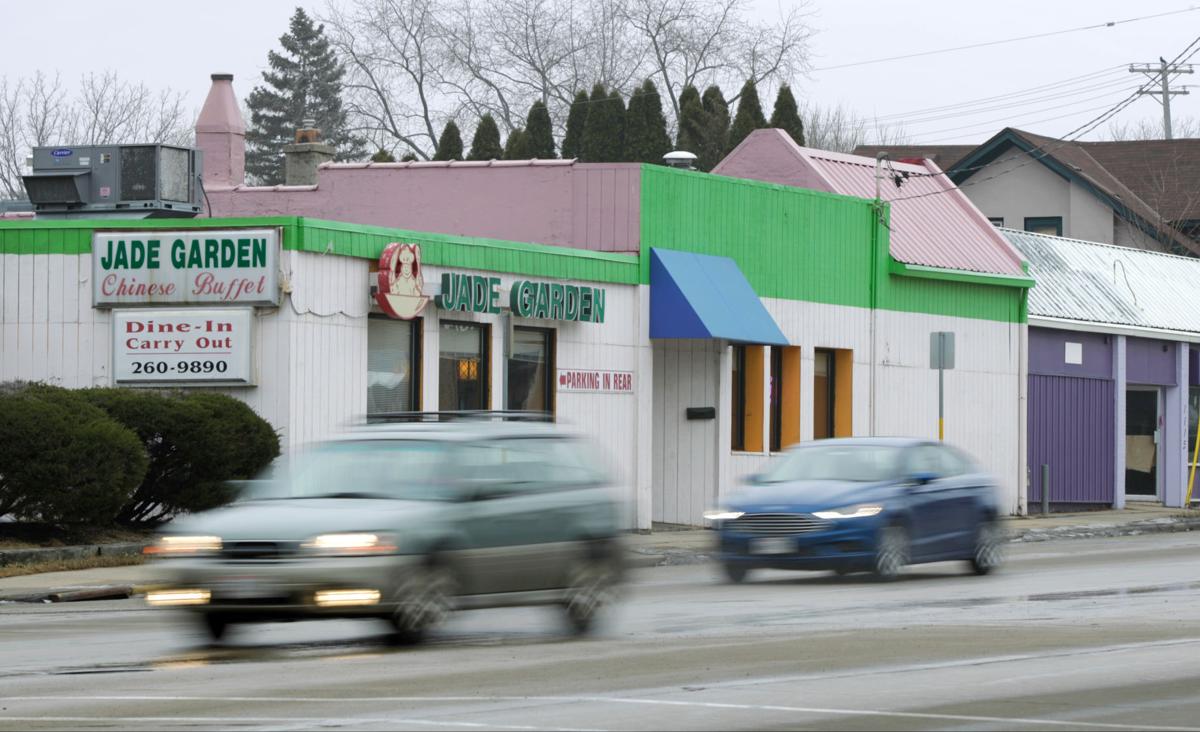 The proposed redevelopment of a series of buildings on the 1100 block of South Park Street is stalled as the property owner makes a final attempt to make changes that would satisfy residents and city officials. The proposal is one of four major projects that would change the face of a strip of the busy street. 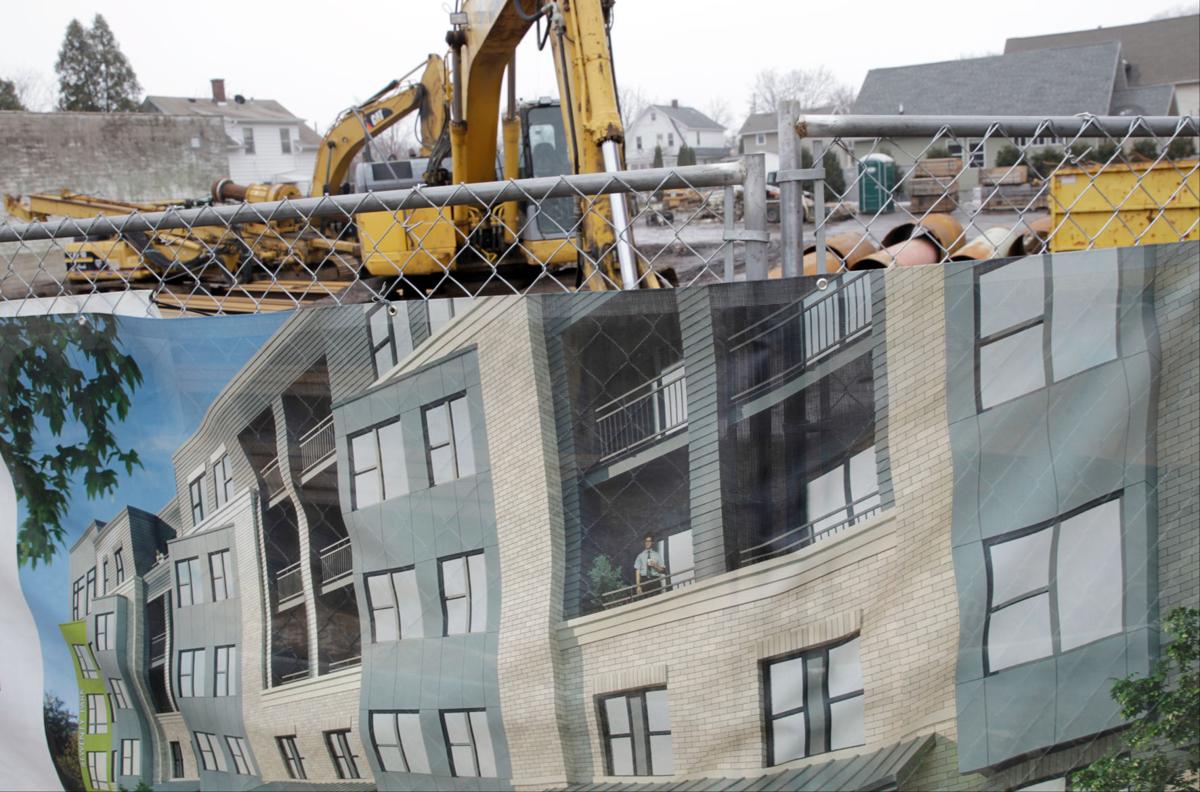 A fence covering shows a mural of a future development at the corner of South Park Street and Delaplaine Court. The $21 million "8Twenty" project was revised to accommodate changes sought by residents, the first of four recent proposals to break ground in the area. 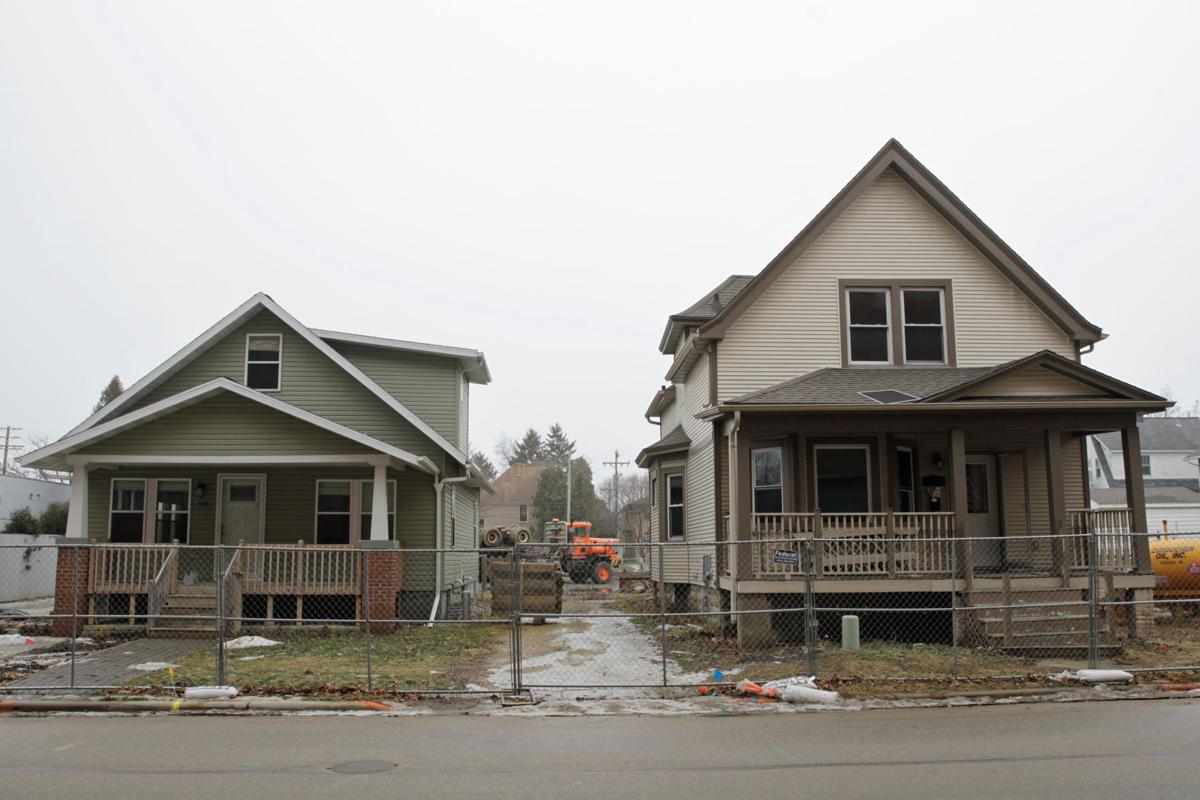 Two homes are surrounded by a construction site for a development on Delaplaine Court between South Park and South Brooks Streets. Developer JT Klein Co. agreed to keep a row of homes as part of the project to serve as a transition to the residential neighborhood across the street. 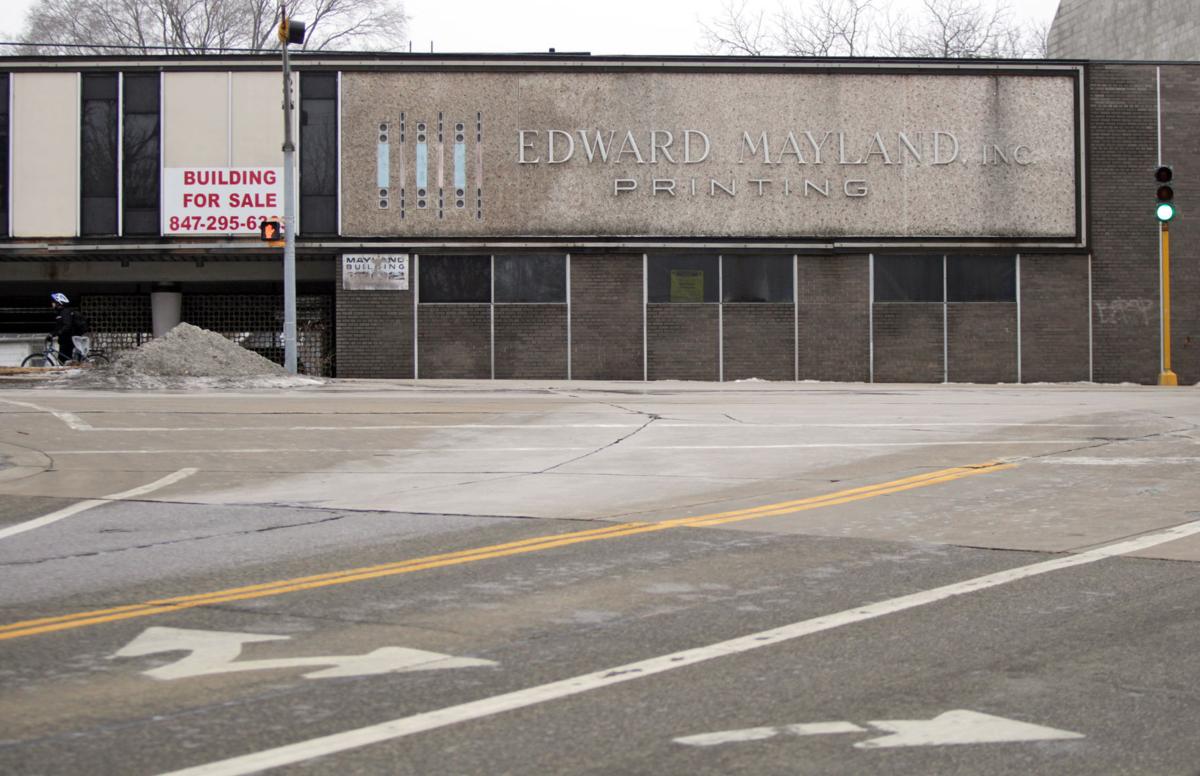 Heartland Housing is proposing to build permanent housing for the homeless with support services at 1202 S. Park St., the site of a former print shop. 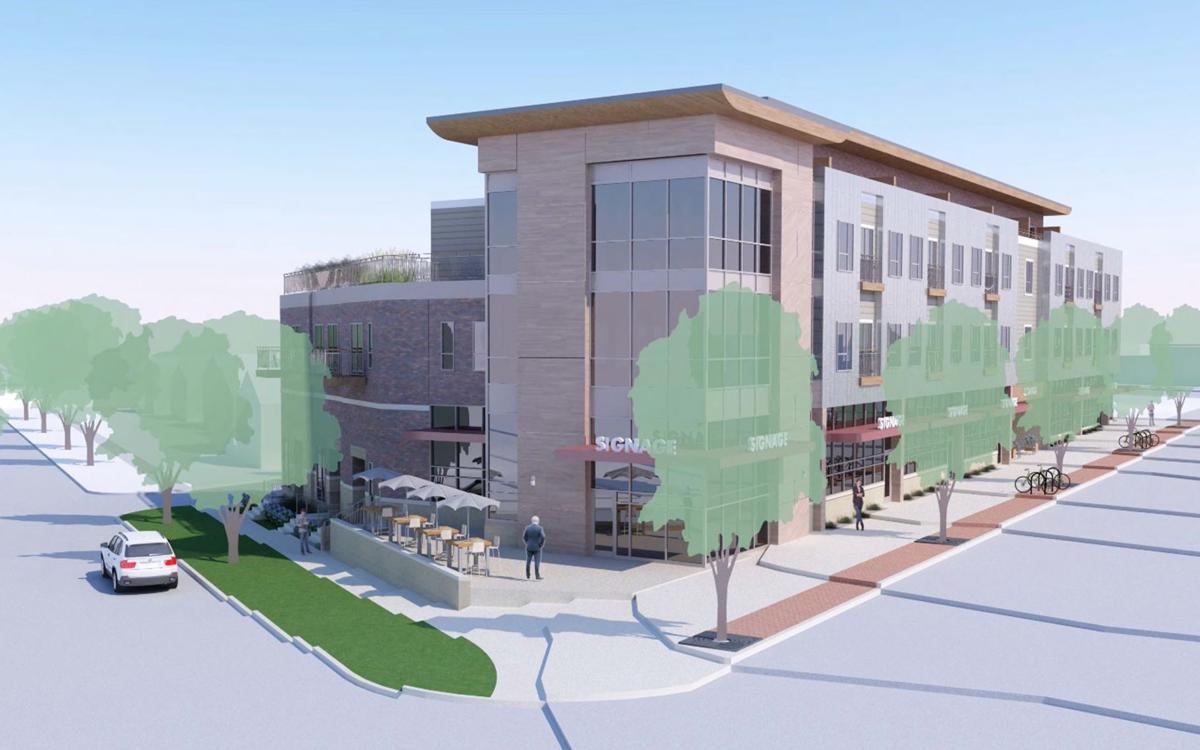 Neighbors have pushed back against Sue Jiang's proposal to build a 42,000-square-foot building on the site of the Jade Garden restaurant at the corner of South Park and Emerson streets.