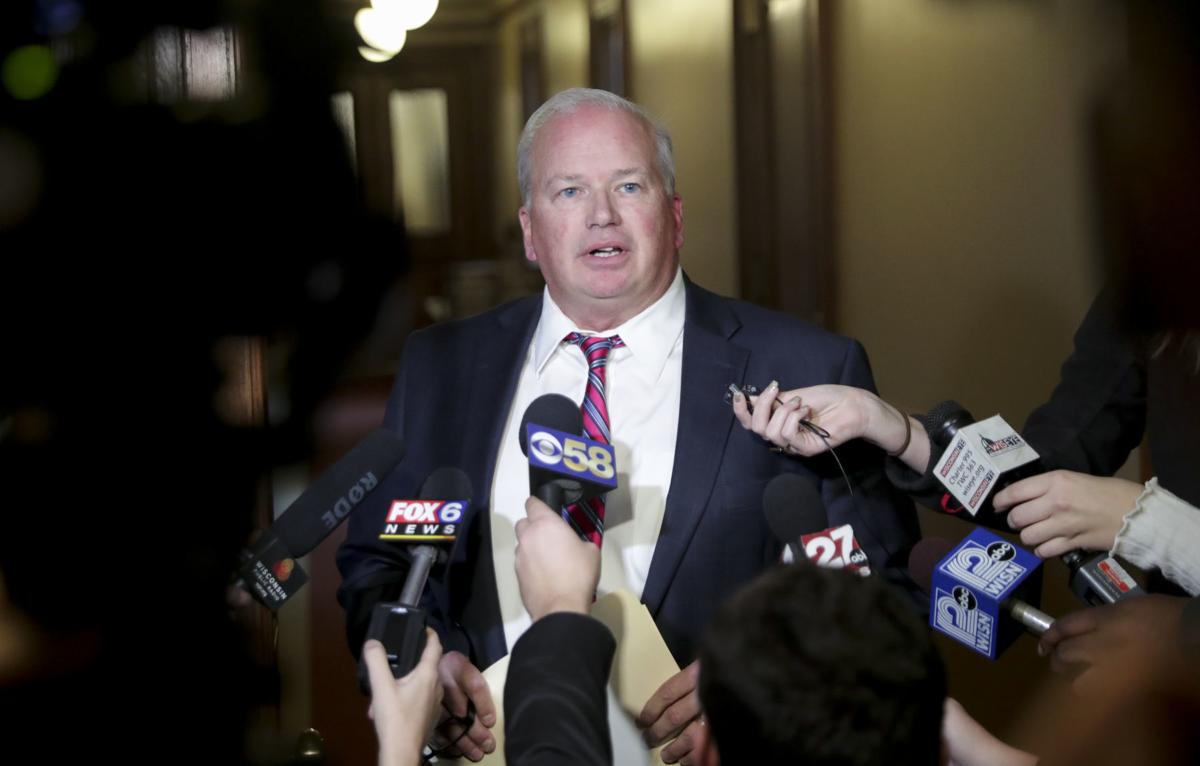 Senate Majority Leader Scott Fitzgerald said at a press conference Thursday that a lame-duck session of the state Legislature could limit some of Gov.-elect Tony Evers' powers. 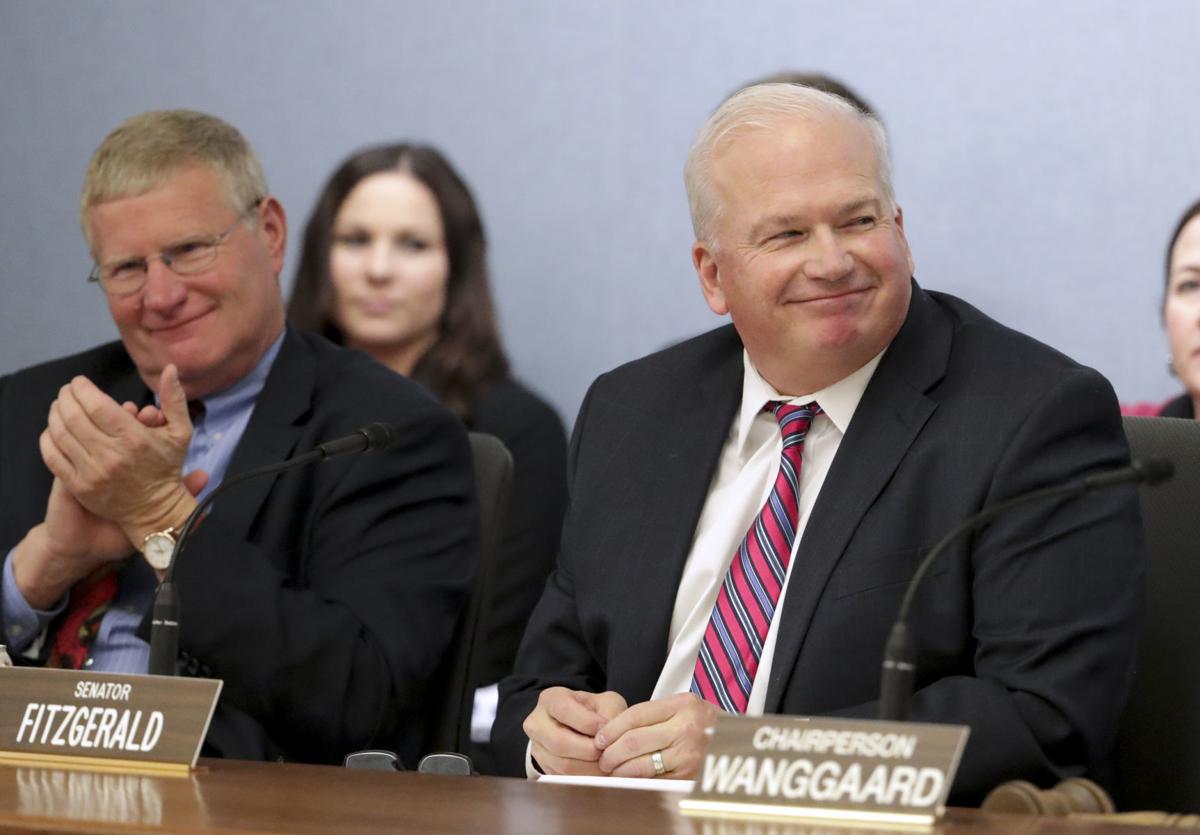 Sen. Scott Fitzgerald, right, was re-elected Thursday to the post of Senate majority leader, a position he has held since 2011.

The Republican leader of the state Senate on Thursday downplayed a suggestion a day earlier by his Assembly counterpart that GOP lawmakers might curtail executive branch power before Democratic Gov.-elect Tony Evers is sworn in.

Yet Sen. Scott Fitzgerald, R-Juneau, acknowledged lawmakers may tackle a host of changes with Gov. Scott Walker in a year-end lame-duck session, including ones that could affect the governor’s authority.

That could include adding to state law existing rules on the state’s photo ID requirement to vote, and on the state jobs agency Evers proposed to eliminate, the Wisconsin Economic Development Corp.

“I’m not sure why there’s all this discussion about (how) we’re somehow trying to undermine the new governor. That’s not the case at all,” Fitzgerald said. He was addressing Assembly Speaker Robin Vos’ comments to reporters Wednesday, hours after Evers defeated Walker.

Hours earlier, Evers warned GOP lawmakers against a hard-line approach to undercut him before he takes office in January.

“There is a lot of common ground that we can find. But I will not tolerate desperate antics to cling to power and violate the checks and balances of Wisconsin’s government,” Evers said in a statement posted to Twitter.

Fitzgerald said any changes to WEDC could include ones to “adjust” its appointees. He did not elaborate and his office did not immediately respond to an inquiry about it.

The 14-member WEDC governing board includes six members nominated by the governor and confirmed by the state Senate for four-year terms.

Evers, during the campaign, proposed eliminating WEDC, created by Walker and GOP lawmakers in 2011, and moving its functions to another agency such as the Commerce Department.

Pressed on what a GOP lame-duck agenda means for lawmakers’ approach to working with Evers, Fitzgerald cited the scope of power the state Constitution gives the governor to reshape bills passed by the Legislature, which is more expansive than other states.

“Tony Evers is going to have the most powerful veto pen in the nation,” Fitzgerald said. “The idea that he’s not going to be able to keep the Legislature in check, I think, it would be naive to think that.

“We’ll respect Tony Evers like we have any other governor, and we’ll work with him.”

Fitzgerald cited opiates and law enforcement as areas on which he could find common ground with Evers.

Fitzgerald said he and Vos have not discussed working with Walker on any changes to the Department of Natural Resources board or the governor’s power to appoint University of Wisconsin System regents.

The changes Fitzgerald discussed Thursday could be considered by senators in a legislative session in December, Fitzgerald said. He said it’s still possible senators will hold a separate session later in November to consider a proposed state aid package to retain jobs in the Fox Cities at paper giant Kimberly-Clark.

Walker’s office did not immediately respond Thursday to an inquiry about whether it wants to work with Fitzgerald or Vos on changes to the powers of the governor’s office.

Fitzgerald and Shilling, D-La Crosse, were returned to their posts without opposition.

Tuesday’s results were a downer for Senate Democrats, especially in an election in which Democrats swept all statewide offices and re-elected U.S. Sen. Tammy Baldwin, D-Madison. They had hoped to expand their 15-member caucus and potentially capture the majority in the 33-member chamber.

Instead they lost a seat, with Sen. Caleb Frostman, D-Sturgeon Bay, losing a rematch with Rep. Andre Jacque, R-De Pere, whom Frostman beat in a special election earlier this year. The partisan breakdown of the chamber is now 19 Republicans and 14 Democrats.

Shilling, during an open caucus meeting at the state Capitol, acknowledged the disappointment but said Democrats can be proud of their efforts to help elect Evers.

“For the first time in a long time, we have an ally in the East Wing,” Shilling said, referring to the wing of the Capitol that includes the governor’s office. “That changes the dynamic.”

Sen. Dan Feyen, R-Fond du Lac, was elected assistant Senate majority leader. That post is being vacated by Sen. Leah Vukmir, R-Brookfield, who did not seek re-election and ran unsuccessfully for the U.S. Senate against Baldwin.

Democratic state lawmakers say a Republican effort to curtail the power of incoming Gov. Tony Evers may be illegal, is “embarrassing” and amounts to “political shenanigans.”

The comments come amid heightened debate, following Evers' win, about how the state uses taxpayer dollars to attract and retain jobs.

GOP Senate leader: Nothing ruled out for lame-duck session

Anything approved by the Legislature could be signed into law by Republican Gov. Scott Walker before Evers replaces him on Jan. 7.

Senate Majority Leader Scott Fitzgerald said at a press conference Thursday that a lame-duck session of the state Legislature could limit some of Gov.-elect Tony Evers' powers.

Sen. Scott Fitzgerald, right, was re-elected Thursday to the post of Senate majority leader, a position he has held since 2011.