The subpoena from Michael Gableman is “astoundingly broad and invasive” and seeks a “veritable mountain of internal documents and communications,” the group said in a statement. It also marks a broadening of the Gableman investigation into groups not directly associated with running elections.

The subpoena, issued Dec. 28 and — according to Voces de la Frontera Action, received on Jan. 5 — sought a response by Wednesday. It asked for emails and other communications related to the 2020 election, as well as information about the group’s finances and contacts with government officials and other nonprofits.

“Gableman’s subpoena is modern-day McCarthyite political theater designed to perpetuate lies about the 2020 election and silence and intimidate voters of color from exercising their right to free speech and their right to vote,” Christine Neumann-Ortiz, the group’s executive director, said in a statement.

Gableman did not respond to a request for comment.

The group, which is the advocacy arm of Voces de la Frontera, said Gableman has no authority over nongovernmental organizations. In papers filed Wednesday, it asked Dane County Circuit Judge Rhonda Lanford to quash the subpoena. The judge set a hearing for Feb. 2.

The immigrant rights group’s motion was filed as part of a lawsuit Democratic Attorney General Josh Kaul has filed that seeks to quash another subpoena Gableman issued to Wisconsin Elections Commission administrator Meagan Wolfe compelling her to submit to questioning at his Brookfield office.

Assembly Speaker Robin Vos, R-Rochester, hired Gableman last summer to look into how the 2020 election was conducted after former President Donald Trump complained that Wisconsin Republicans weren’t doing enough to promote the lie that Democrat Joe Biden stole the state from him. Biden defeated Trump by about 21,000 votes. A recount and multiple court challenges have revealed no evidence of widespread fraud.

On Wednesday, Assembly Speaker Robin Vos, R-Rochester, suggested at a WisPolitics.com luncheon that he regretted how Gableman’s investigation into the election unfolded, saying it could have been “neater.” But he derided Democrats for their rhetoric regarding the investigation, which has cost taxpayers about $676,000 and is projected to extend into February.

“I did not appreciate the level to which the left feels like their only issue is protecting people’s right to vote as if we’re trying to take it away,” Vos said.

Vos later added that Democrats call “voting rights” what he considers to be Democrats’ strategies to win the elections, days after a Waukesha County judge ruled absentee ballot drop boxes are not allowed in the state.

Neumann-Ortiz said in a statement Wednesday that Gableman is targeting her group “precisely because we have successfully motivated and organized tens of thousands of Latinxs and (multiracial) youth voters statewide to turn out and vote in the 2018 gubernatorial race and in the 2020 presidential election.”

Vos also criticized the media Wednesday for being the only group “obsessed” with Gableman’s ongoing investigation, which continues despite a recount and court decisions affirming Biden’s win.

Also on Wednesday, the Republican-controlled Assembly Elections Committee approved on a party-line vote a motion approving of Gableman’s probe, including saying it was OK with him interviewing people privately, assisting the committee and allowing him to compel the production of documents, including through subpoenas.

Rep. Gordon Hintz, D-Oshkosh, along with the Assembly Election Committee’s Democratic members, introduced a resolution that would eliminate Gableman’s Special Counsel office and fire his employees.

The resolution is largely symbolic and all but certain to go nowhere, but it was indicative of Democratic legislators’ frustration with the investigation after numerous reviews have affirmed there was no widespread fraud in the 2020 election.

“Ensuring elections are free, fair, and secure should not be a partisan issue,” Hintz said in a statement. “I encourage all of my colleagues to add their names, support Wisconsin’s nonpartisan election officials, and affirm the integrity of Wisconsin elections.” 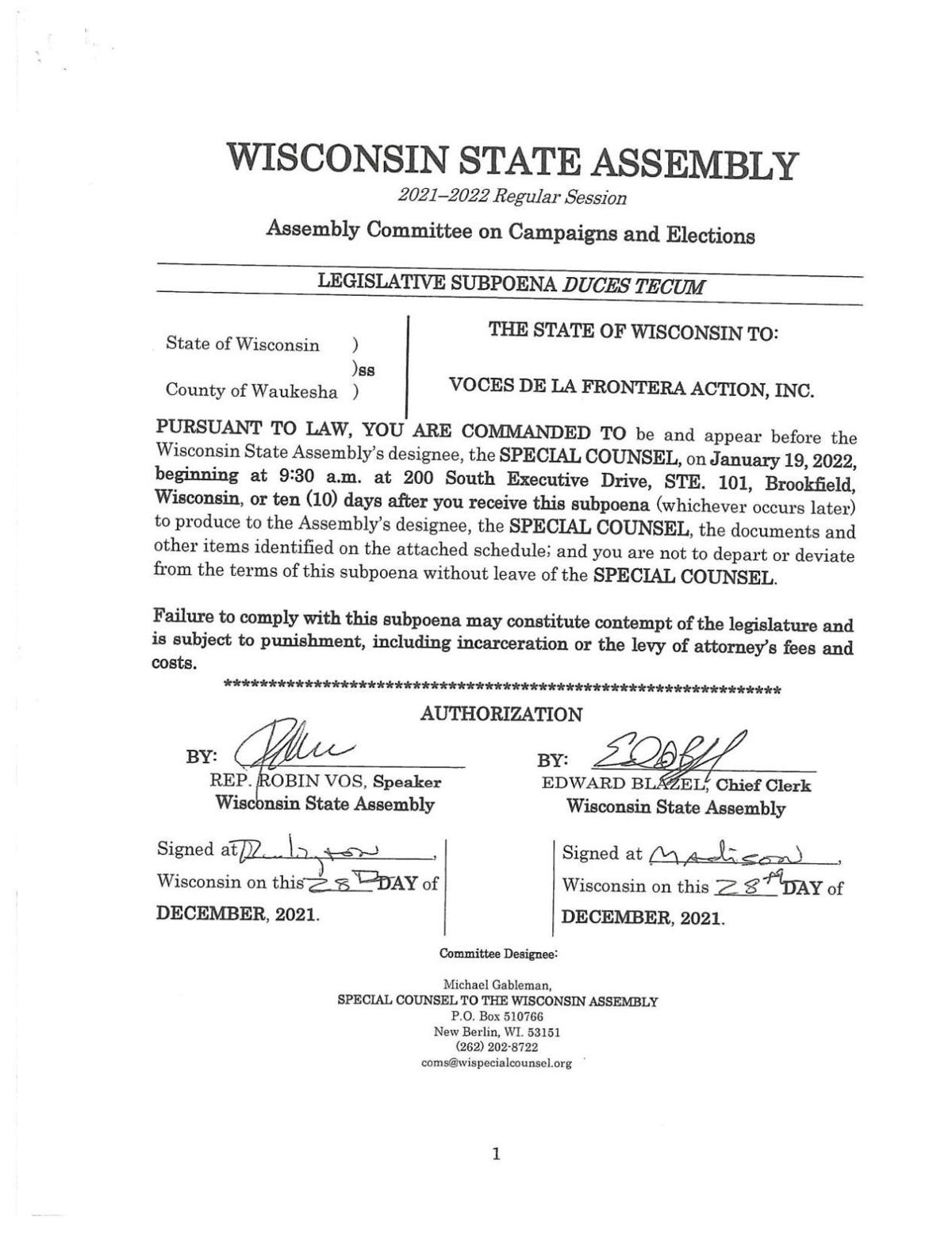 The case stems from one of three ongoing lawsuits filed by American Oversight over public records requests the organization filed last year. Attorneys for American Oversight have asked that Vos be held in contempt for not releasing the records sooner.

Rep. Elijah Behnke, R-Oconto, is shown on what appears to be a hidden camera posted to YouTube making incendiary comments.

Officials hoped that approach would lead to shorter lines at the polls and less chance of spreading COVID-19.

A Nebraska-based voting machine company told the Republican-hired attorney leading an investigation into the 2020 presidential election in Wisconsin that it will not comply with subpoenas issued seeking a broad array of information.