A fourth former secretary for Gov. Scott Walker has come forward to criticize the Republican governor after resigning from his job leading Madison’s economic development agency in order to speak more freely.

Paul Jadin, the first CEO of the Wisconsin Economic Development Corp., informed the board of the Madison Region Economic Partnership on Wednesday that he was resigning from his $208,000-a-year job. He said the resignation was necessary to avoid entangling the agency with his political activity.

In their letter, the three former secretaries say they joined his administration with a “fervent belief” that Walker shared their desire to improve the state. But over time, they said, “it became clear that his focus was not on meeting his obligations to the public but to advancing his own political career at a tremendous cost to taxpayers and families.”

Walker’s campaign did not respond directly to the former officials’ critique. But in a statement, Walker spokesman Austin Altenburg obliquely criticized Jadin’s stewardship of WEDC, citing a nonpartisan Legislative Audit Bureau memo from May 2013, seven months after Jadin left the agency.

Among other things, that audit found WEDC “did not have sufficient policies, including some that are statutorily required, to administer its programs effectively,” “awarded some grants, loans, and tax credits to ineligible recipients, for ineligible projects, and for amounts that exceeded specified limits” and “did not consistently perform statutorily required program oversight duties, such as monitoring the contractually specified performance of award recipients, and could report more clearly on the number of jobs created and retained as a result of its programs.”

“WEDC has grown leaps and bounds in success after moving on from the days of Paul Jadin’s management,” Altenburg said, calling it “the linchpin to huge wins and good-paying jobs in the Wisconsin Comeback, including bringing Amazon, Haribo and Foxconn to Wisconsin.”

MadREP board chairman Tim Gaillard in a statement praised Jadin’s leadership over the past six years, saying MadREP has played an integral role in advancing the Madison region’s economy, has “raised the stature” of the region on a national level and created “believers” in economic development at a local level.

Gaillard said the board rejected Jadin’s resignation and asked him to take an unpaid leave of absence so it could further evaluate the matter. Jadin said his resignation is final.

Evers campaign manager Maggie Gau said there has been no discussion with Jadin about his taking a position in a possible Evers’ administration.

The letter writers say they will not vote for Walker because of his handling of transportation, education and safety issues as well as “pervasive questionable practices within the administration.”

“Governor Walker has consistently eschewed sound management practices in favor of schemes or coverup and has routinely put his future ahead of the state,” the letter states. “The result is micromanagement, manipulation and mischief. We have all been witness to more than our share of this.” 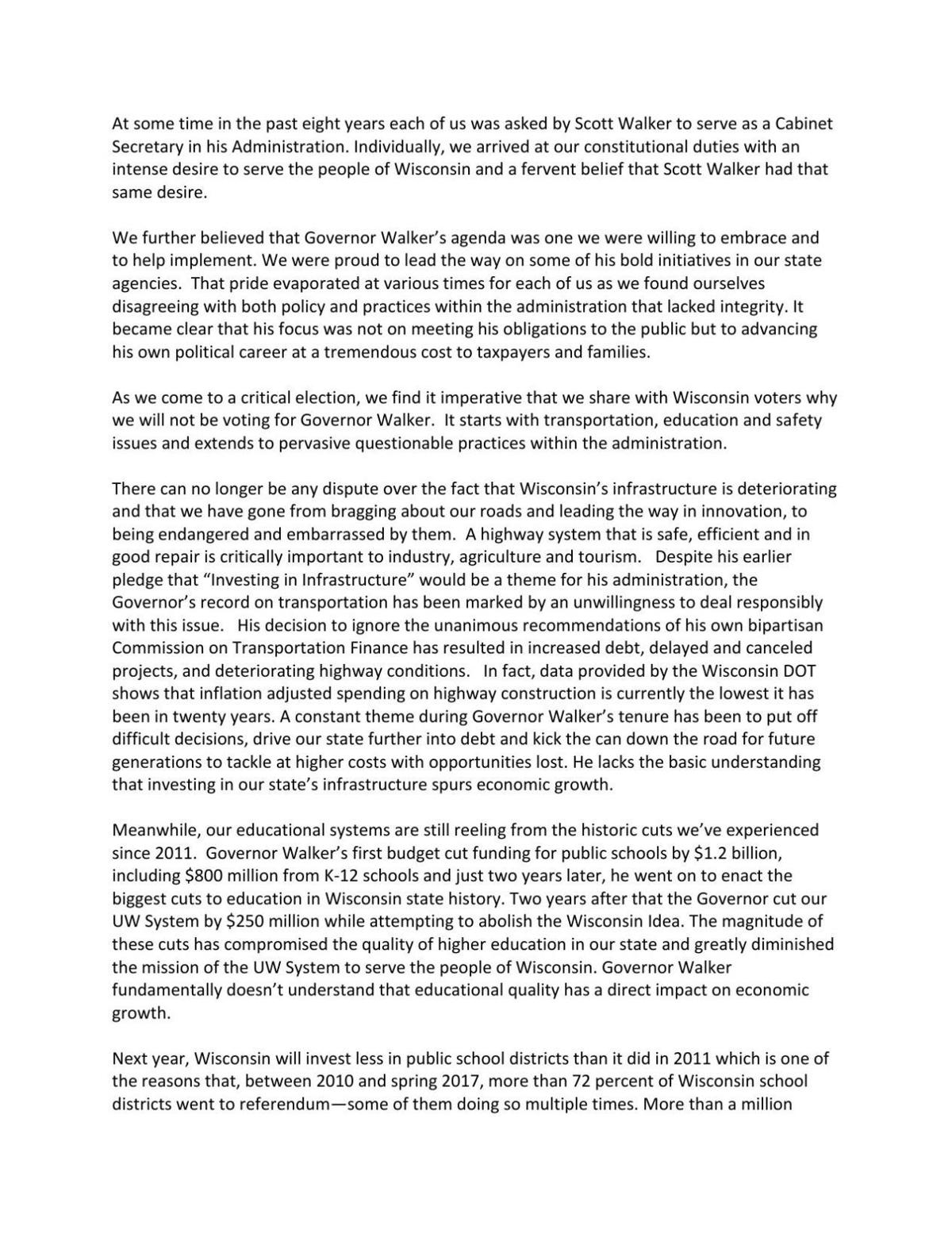 The letter doesn’t list specific examples of “mischief” or “coverup” but said when Walker was traveling the country in 2012 to raise money for his recall election he stopped attending Cabinet meetings and delegated responsibilities to his chief of staff.

“When he decided to run for President in 2015 he subordinated Wisconsin interests to those in Iowa and New Hampshire and his policy/budget proposals started to clash with members of his own party who still would have to stand for election in Wisconsin,” they wrote.

Jadin, Bildsten and Wall described themselves as having “served our state and local governments in many capacities over our careers and have voted for and supported Republicans.” They said the decision to endorse Evers comes with “a great deal of reflection and discernment.”

Jadin, a former Green Bay mayor, was WEDC CEO until taking a job with the Madison economic development agency, then known as Thrive, in November 2012. During his time at WEDC the agency came under heavy scrutiny for its handling of several awards and not following certain statutorily required policies.

In 2015 Jadin told the State Journal that he rebuffed then-Department of Administration Secretary Mike Huebsch’s push for a $4.5 million loan to a top Walker donor. WEDC gave the donor’s company $500,000, but the loan was never repaid. A subsequent agency review could not locate underwriting documentation for that and more than two dozen other awards.

Bildsten led the Department of Financial Institutions for Walker’s first term and left in February 2015. He has previously called out Walker’s office for discouraging the creation of public records, an issue the letter also raises.

“The Governor and his team do not like to leave a paper trail or state record of their actions relating to the conduct of state business,” Bildsten, Wall and Jadin wrote. “They simply did everything in their power to avoid transparency in his decision-making process so they could not be held to account.”

In an interview, Bildsten said one of his biggest frustrations with the Walker administration was its support for the payday lending industry, which charges exorbitant interest rates for quick loans, usually to low-income people, and has made contributions to Walker and both Republican and Democratic legislative committees. He said when he refused to meet with industry lobbyists he was “quickly chastised by the governor’s office.”

He said the last straw was when Walker proposed consolidating various agencies in state government in his 2015-17 budget proposal, which Bildsten said wouldn’t have generated savings but would have allowed Walker to say during his presidential campaign he had shrunk state government.

Wall served as Corrections secretary from 2012 until 2016, when he briefly returned to his previous job as administrator of the state Department of Justice’s Division of Criminal Investigation before being demoted. He was fired in April 2016 after suggesting Walker’s chief of staff to shred a letter related to his demotion, which would have violated the state’s public records law.

Wall penned a tell-all book earlier this year accusing Walker of deception and inaction in addressing abuse allegations at Wisconsin’s youth prison. He said his repeated requests for more funding for the prison were rebuffed by Walker’s office. Walker’s office has called the accusations “false attacks” and challenged Wall’s credibility based on his firing.

Ed Wall, who resigned from his Corrections job amidst an FBI investigation into abuse at Lincoln Hills youth prison, calls Walker's handling of the scandal "shameful."

"He wanted the world to know that if he didn’t hit 250,000 jobs someone was to blame for it, and it wasn’t him," the former head of the Wisconsin Economic Development Corp. said of Gov. Scott Walker.

He told attendees that the "character of the country is on the ballot" in this midterm election and that the "only check on this behavior is you and your vote."