An independent analysis has failed to identify the person who called a local activist a vulgarity toward the end of a marathon online meeting in September that exposed deep divisions on the Madison City Council.

At the same time, the report released Thursday by Phoenix-based USA Forensic identifies four men who might have said the word. And while the four include the man long accused in the incident, Ald. Paul Skidmore, it also suggests the culprit was, unlike Skidmore, wearing a headset and had a microphone that was activated at the time the word was uttered.

Skidmore, a 20-year council veteran, has repeatedly denied using the slur that is generally used against women or to describe female genitalia. He took the report as an exoneration.

“I did not make the offensive remark heard during the September 1, 2020 (City) Council meeting so I am not surprised that I was not identified as the speaker,” he said in a statement. “After all of the time and money spent in this investigation, the Report commissioned by the City could not identify the speaker.” 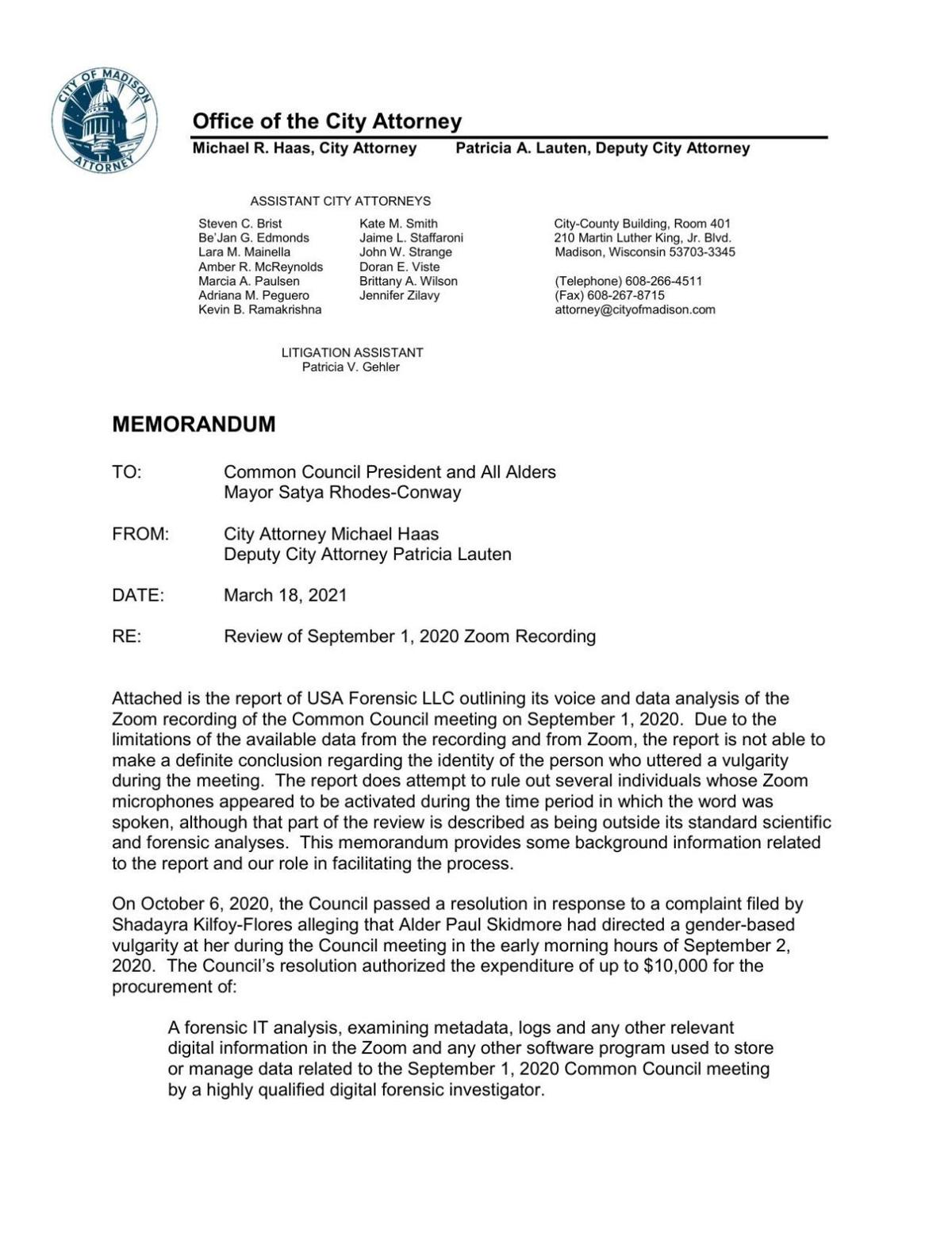 Shadayra Kilfoy-Flores, the activist and presumed target of the slur, declined to comment. Her formal complaint against Skidmore on Sept. 15 triggered the investigation.

Audio analyst Bryan Neumeister says in the report that as of Jan. 27, his investigation was stalled due to lack of conclusive data from the Zoom platform the council was using for the meeting.

But City Attorney Mike Haas said in a memo accompanying the report that “because of the (City) Council’s desire to obtain useful results, we asked Mr. Neumeister to consider whether it was possible to at least rule out any potential speakers.”

“Mr. Neumeister agreed to do so, with the caveat that the only process he could use would not be definitive and would not result in a finding that would be admissible in court under legal evidence standards,” Haas said.

Haas said the city provided Neumeister samples of voices of nine other men in the meeting “whose microphones Zoom identified as being activated at the time the word being analyzed was spoken.”

Skidmore was not among those men, but Haas said that given Kilfoy-Flores’ complaint, “we also asked that a sample of Alder Skidmore’s voice be included in this comparison.”

Neumeister ruled out six of the men based on their accents, background noise or their distance from their microphones, but not Skidmore, 9th District; Alds. Michael Tierney, 16th District, and Keith Furman, 19th District; or city staffer Joe Schraven.

Furman, Tierney and Schraven said Thursday they did not say the word.

It wasn’t clear Thursday whether Zoom could have recorded someone speaking if the platform didn’t indicate the person’s microphone was on, and Haas declined to answer that question. Neumeister did not respond to requests for comment.

The findings come a little more than two weeks before Skidmore faces voters in the April 6 election. He and Nikki Conklin emerged from a four-way primary last month.

Prior to commissioning the investigation, the City Council had explored whether to hold a formal hearing on Kilfoy-Flores’ complaint. It would have taken the votes of 15 members of the 20-member council to remove Skidmore from office.

Mayor Satya Rhodes-Conway and council president Sheri Carter did not immediately respond to requests for comment. 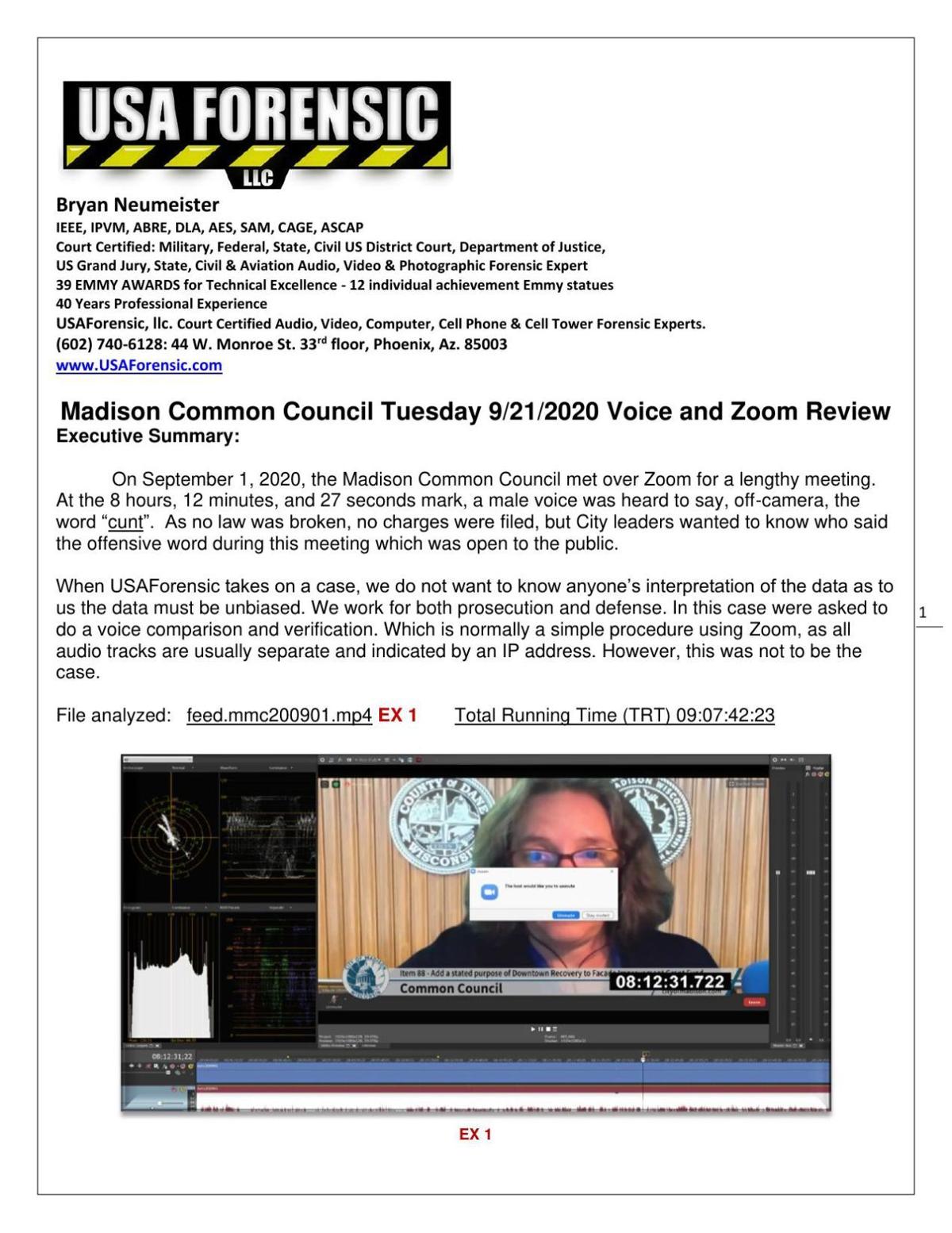 Skidmore has grown increasingly isolated on the council in recent years as the council has moved even further to the left politically and Skidmore has been outspoken in his defense of the Madison Police Department, which local activists and their allies on the council believe needs reform, more oversight or cuts.

At the time he was alleged to have uttered the vulgarity, the council had just finished approving the creation of a civilian board to oversee police and an independent police auditor, and Skidmore was the last one to speak before Rhodes-Conway called on Kilfoy-Flores to speak. Video of the person who said the alleged profanity did not pop up in the Zoom meeting when the word was spoken, and no one in the meeting reacted to the slur at the time it was uttered.

The incident sparked a back-and-forth among city elected leaders over their behavior, with Rhodes-Conway and Carter issuing a joint statement later on Sept. 2 saying that “over the past few months, the culture and civility of City Council meetings have drastically deteriorated, culminating in what appears to be the use of gender-based profanity addressed at a member of the public.”

Fourteen members of the council shot back the next day with a statement denying that there has been any broader deterioration of civility and calling on the person who uttered the alleged slur to come forward.

The day after that, Carter sent an email to her colleagues on the council in which she called out Ald. Rebecca Kemble, 18th District, for allegedly uttering expletives critical of Rhodes-Conway and her supporters, and Ald. Max Prestigiacomo, 8th District, for a “profanity-laced” post on his personal Facebook page that “incited violence and resulted in numerous calls from residents for his resignation as well.”

The post was a repost of a flier critical of police in the days after Jacob Blake was shot by a Kenosha police officer on Aug. 23.

The resolution approving the investigation into the September meeting called for it to be submitted to the council by Nov. 10 and cost no more than $10,000. USA Forensic was hired at a rate of $275 an hour, but has not yet submitted an invoice, according to Haas.

Over the past several months, Edgewood High School, its neighbors and the city have been in a spat over whether the school should be allowed to play games on its athletic field and make upgrades including a sound system, expanded seating and lights for night games.

Madison's City Council allowed Edgewood to repeal its master plan, a move that allowed the school to host games. But the field upgrades are still up in the air.

Catch up on the major developments in the ongoing conflict:

Ald. Tag Evers said Edgewood is pursuing "a shortcut" instead of what he and neighbors see as a compromise. But Edgewood has a whole list of reasons for why that solution is "unworkable."

The Madison City Council will make the final decision on the request at its Jan. 7 meeting.

After a lack of votes, the Plan Commission again delayed a decision on whether to allow Edgewood High School to host games on its athletic field.

The Madison City Council on Tuesday approved an ordinance change closing a “loophole” that would have allowed Edgewood to make athletic field changes without city's OK.

The city said the Catholic school can't host games on its own athletic field, even though other high schools can. The Mayor said Madison "does not discriminate against any religion."

Edgewood president Michael Elliott said the school does not condone the harassment and was not aware that anyone with Edgewood was carrying it out.

The Near West Side private school hosted a girls soccer game on Tuesday, with more scheduled, amid a bitter debate with residents about proposed improvements to its field.

School officials said this week that they'll postpone construction on field improvements for six weeks to "engage in a constructive dialogue with our neighbors."

The original proposal would have required approval by the city's Plan Commission. Lighting and sound systems are regulated by city ordinances, so the school will just need to meet those regulations.

Many neighbors continue to be opposed, saying compromise has come late and that the school has misrepresented a main reason for needing a stadium.

Ald. Allen Arntsen said he'll support a proposed stadium at Edgewood High School if daytime use of the athletic field is capped at uses in place for 2018, and if the use of lights is limited to a five events per year.

Dozens of yard signs near the private high school's campus on the Near West Side show opposition to the upgrades, despite the school's assurances that the lighting and sound system wouldn't be disruptive.

Several Madison City Council members rushed to judgment of Ald. Paul Skidmore, District 9. He was accused of directing a sexually based commen…

Welcome to spring: Beautiful weekend for the vernal equinox for southern Wisconsin

However you define it — meteorological spring started March 1 and the vernal equinox is at 4:37 a.m. Saturday — spring will be in the air across southern Wisconsin this weekend, according to forecasters.

In a letter to members, the Glacier’s Edge Council said it is expected to contribute $580,000 to the Boy Scouts of America’s victim fund established as part of an ongoing lawsuit.