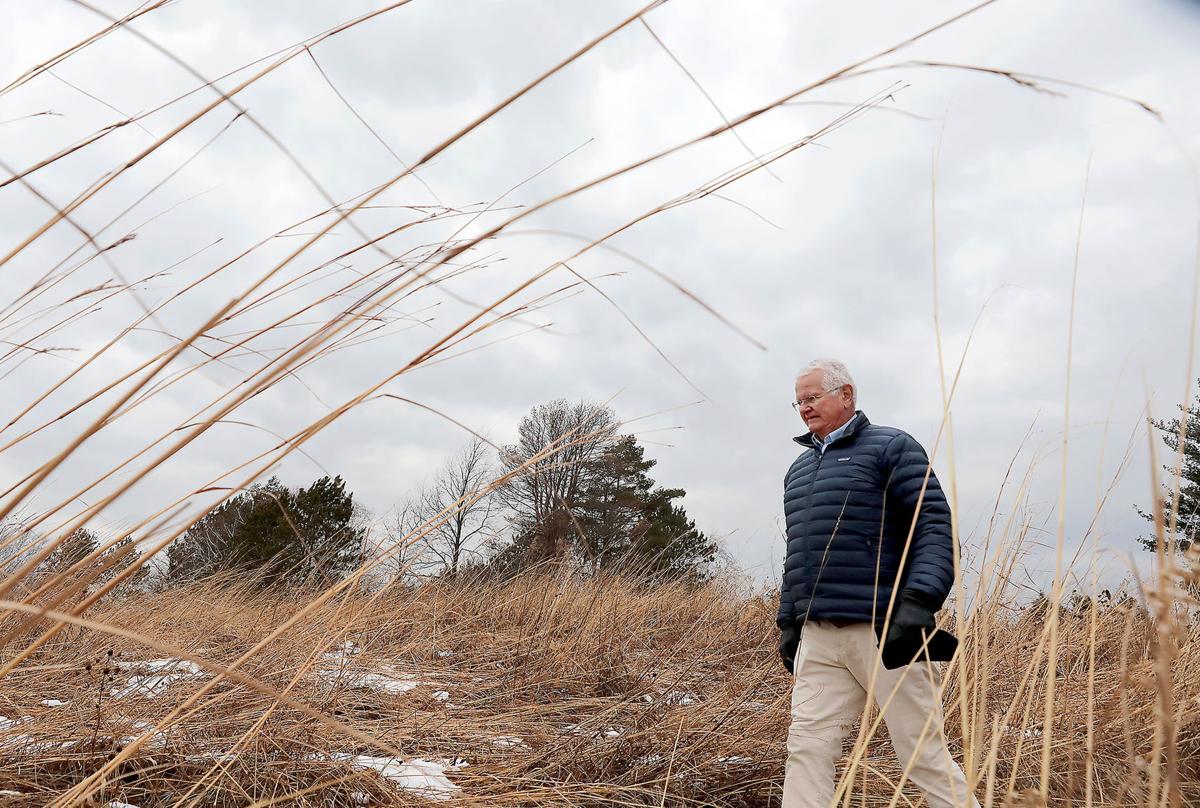 Greg Armstrong, former director of the UW-Arboretum and retired land manager at Holy Wisdom Monastery, walks the grounds of the monastery in Middleton. 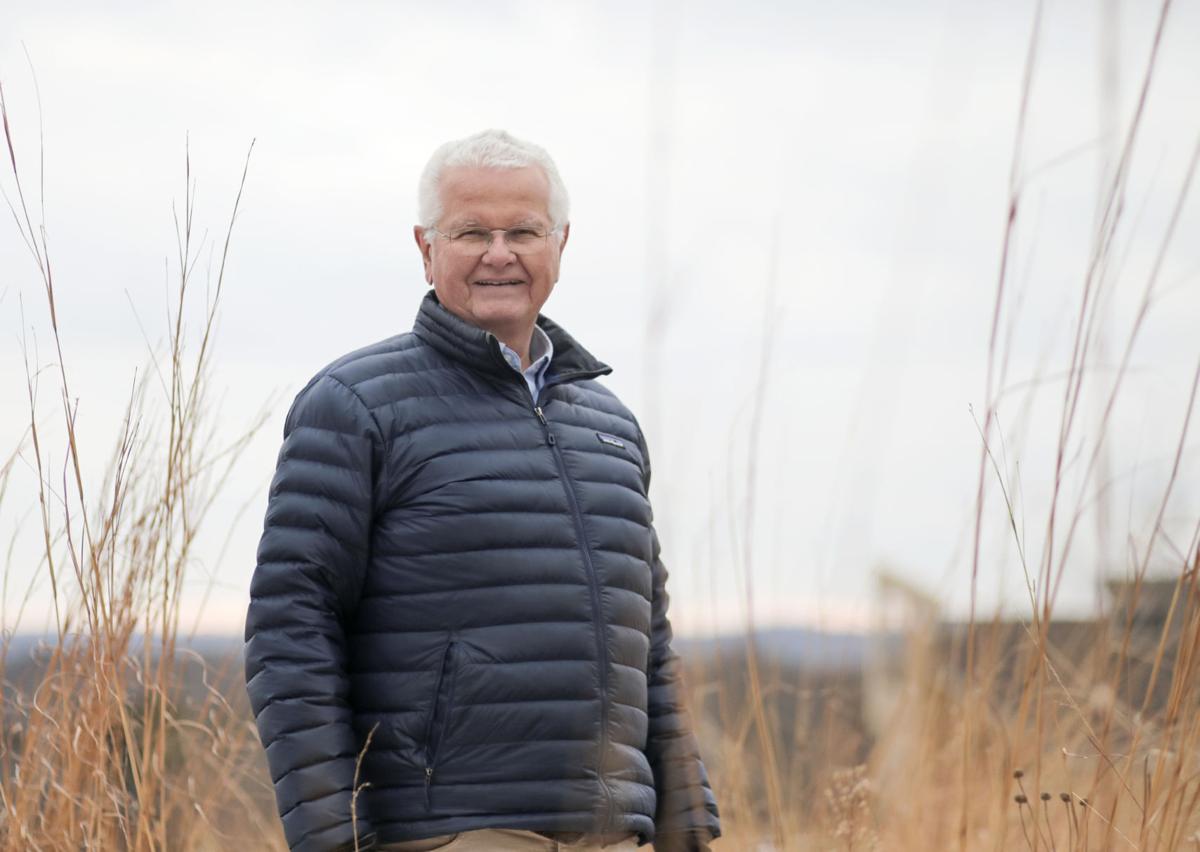 Greg Armstrong served as the director of UW-Madison's Arboretum from 1983 to 2004.

Greg Armstrong, who has spent the past 50 years restoring natural places, retired for a second time this month, but if the pattern holds, it won’t be the last time the former UW-Madison Arboretum director heads back to heal the land.

Armstrong earlier this month capped off his post-retirement stint as the land manager at Holy Wisdom Monastery in Middleton, where he spent more than eight years helping to restore some of the property’s 190 acres of prairie, savanna and woodland for people to enjoy.

The Monastery, which prides itself on its mission to care for the Earth, seeks to unite both the natural and spiritual realms and has provided Armstrong with what he said was some of the most meaningful work in his life.

The 77-year-old Madison resident grew up just south of Madison, in Cooksville, where he attended a one-room schoolhouse. He went to college at UW-Madison, and after a two-month stay with a Japanese family when he was 20, which introduced him to the beauty of Japanese gardens, he opted to study horticulture.

His degree culminated in a post-graduate apprenticeship at the prestigious Royal Botanic Gardens at Kew, in the United Kingdom, and later, a position as director of the Botanic Garden at Smith College, in Massachusetts, where he also taught horticulture.

He later returned to Wisconsin, where he served as the director of UW-Madison’s Arboretum from 1983 to 2004.

What did you enjoy about your work at the Holy Wisdom Monastery?

Armstrong: One of the really extraordinary things about that place, the Holy Wisdom Monastery, is that the sisters have cared for the Earth as a part of their mission.

Over the years, they have done remarkable things. They’ve restored over 125 acres of prairie, we’ve been working on about 30 acres of oak opening savannah. Also we’re about to start working on about a 20-acre woodland as well.

There’s a lot to show for it, and it’s a beautiful place. People are welcome to go out and walk out there. It was probably the most meaningful work that I’ve done in my life, and I just think so well of those people.

Wisconsin's Ron Johnson relishes role as contrarian of the Senate

Are you planning to stay involved with the monastery even though you’re retired?

I’m not on the payroll anymore, but I have stayed on a committee, it’s called the design team. We’re working on laying out the landscape of the monastery, and we’ve got (a) wonderful architect and landscape architect and the new director of land management and environmental education. I’m working with them to develop an interpretive program and lay out places that are going to serve the functions of the monastery by making quiet, contemplative experiences for the people that come there for retreats and meetings.

I’m also going to be on the Friends of Wisdom Prairie Council, which is essentially the board for this organization.

How do you view the relationship between spirituality and nature?

I look at all of the beauty of nature, all of the plants, animals, the microorganisms and the soil, that is the essence of God. One of the things that’s happened to my spirituality recently is that I’ve been introduced to Native American or indigenous ways of knowing, and their spirituality.

There’s a wonderful book called “Braiding Sweetgrass.” It is one of the most profoundly wonderful statements about the human relationship with the rest of the world. One of the refreshing things about it is that human beings are not the center of the world.

It’s just so wonderful, my spirituality is evolving.

What does land restoration mean to you?

Our western culture has changed the landscape so dramatically and it has made other changes in the natural world to the extent that the rest of nature is on the wane. It’s not doing very well.

Even back in the 1930s when they did the first prairie restoration at the Arboretum, most people in Wisconsin had never seen a prairie. Doing ecological restoration is kind of bringing back something that has been essentially destroyed.

It gives me such a great sense of fulfillment and satisfaction to be able to restore some bit of ecological health, so that you have, let’s say, a prairie, and you’ve got over 100 different kinds of plants and you also are restoring the flora and fauna in the soil, that bacteria and fungi. They’re really important.

The birds come back and the little mammals have a place to live, something to eat. I really like the idea of sharing my space on this Earth with all of those other beings, and I’d like to think that I’m not so arrogant that I think that I’m better than they are.

What makes this part of the world special to you?

Wisconsin is in a very interesting place. It is at the transition and kind of the meeting place of a major floristic region, which are the forests of northeastern North America.

It goes all along the Eastern Seaboard, and up into Canada, Nova Scotia, Quebec, Ontario, all of the New England states, New York, Michigan, Wisconsin and parts of Minnesota, and about midway, if you draw a line from Milwaukee up to the Twin Cities, it’s those forests in the north and east of that line, are those same forests.

But then, there’s a huge area in the center of the continent, which is where the prairies are, the Great Plains. Wisconsin is right at the transition, so actually in southern, south and western Wisconsin, we have some prairie, but nowhere near as much as a transitional community.

What does it mean for humans to have an ethical relationship with the land?

I think the Native people had a very special ethical relationship with the land, with everything around us, and they had a special attitude about who they were in relationship to them.

(Conservationist) Aldo Leopold, back in the early part of the 1900s, he worked for the Park Service, he was a forester. One of the things he took so much interest in is the wildlife that lived in those forests.

When he was working at some of the forests down south, they had a terrible problem with the wolf population, or at least the ranchers thought it was a terrible problem. They had an effort in culling all of the wolves, and there’s a very famous quote that comes out of (Leopold’s) Sand County Almanac about when he saw the light in the eyes of the wolves dying and fading away. The green fire was gone.

What happened after that, was that it just completely screwed up the whole rest of the ecology in the area. All of the deer came, mowed all the vegetation up, so he came to a realization, he learned from his life experience, and ultimately wrote about a land ethic. That is a very important statement about the human relationship with nature.

What are the values you try to bring with you into your land restoration work?

Developing a moral compass where the Earth is the center, where you’re caring for everything around, you’re not caring just for your human comfort. I think that is what human beings need to do in order to live in some kind of a sustainable (environment), and I like to think it would be a happy relationship with everything around us. I think that the world would be a better place, and I don’t mean just for human beings, but for everything.

How do you think land restoration can affect the lives of people in the community?

Number one, for people it provides a beautiful place to go and reconnect with the natural world and interestingly, there are a lot of wonderful health benefits for human beings in experiencing nature.

What are some of the biggest challenges facing restoration in our area?

I think the largest challenge is the will of the people. The definition of highest and best use for a piece of land has to do with how much it’s worth as real estate.

If human beings started to look at the world as a community to which we belong, we would probably make different decisions than we do when we go about our lives.

"I look at all of the beauty of nature, all of the plants, animals, the microorganisms and the soil, that is the essence of God."

In coming weeks, Wisconsin expects only about 70,000 doses a week. So even if all 1.6 million people are made eligible, when they will receive their shots, and what they have to do to get them, is still an open question.

Greg Armstrong, former director of the UW-Arboretum and retired land manager at Holy Wisdom Monastery, walks the grounds of the monastery in Middleton.

Greg Armstrong served as the director of UW-Madison's Arboretum from 1983 to 2004.