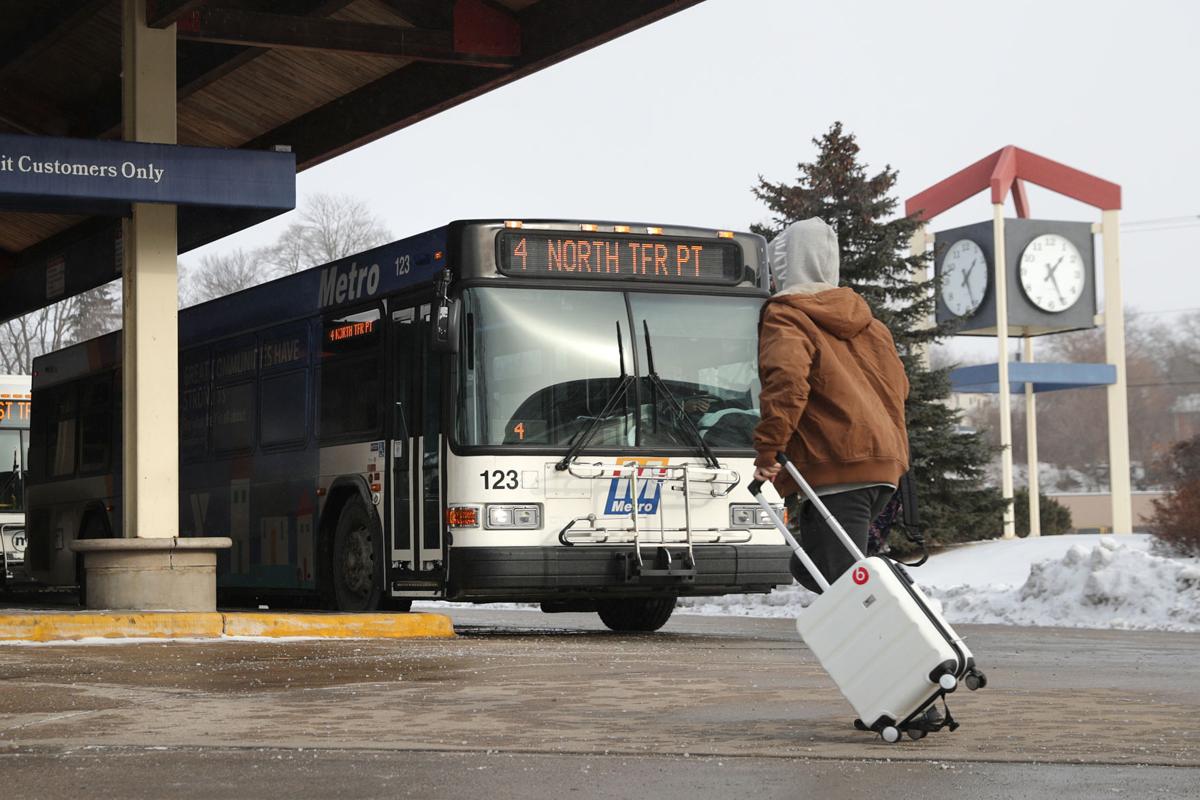 A rider runs to catch a bus at the South Transfer Point in Madison. A coming redesign of Metro Transit's routes would do away with the transfer hubs. 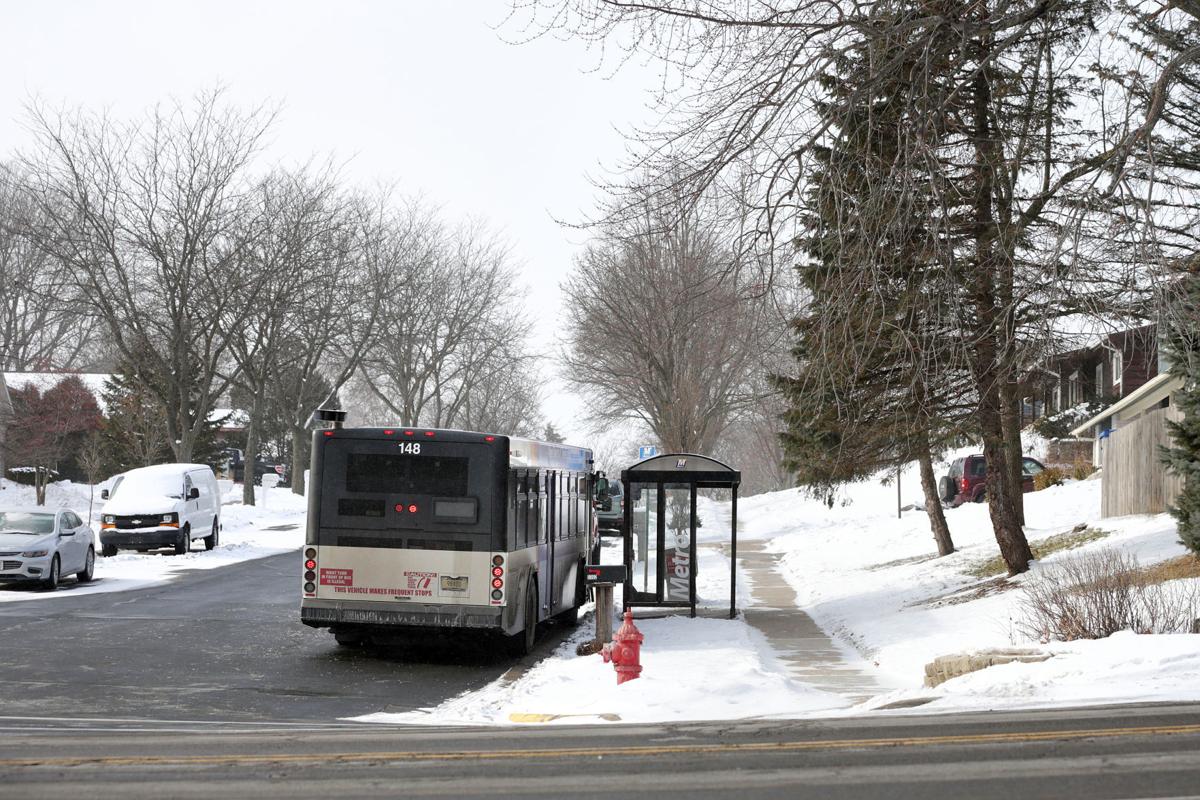 A bus makes a stop at South Ridge Way and Highway Q, in Middleton. Officials in Middleton and Fitchburg are weighing whether a redesign of bus routes should focus on running fewer buses more often or spreading out coverage. 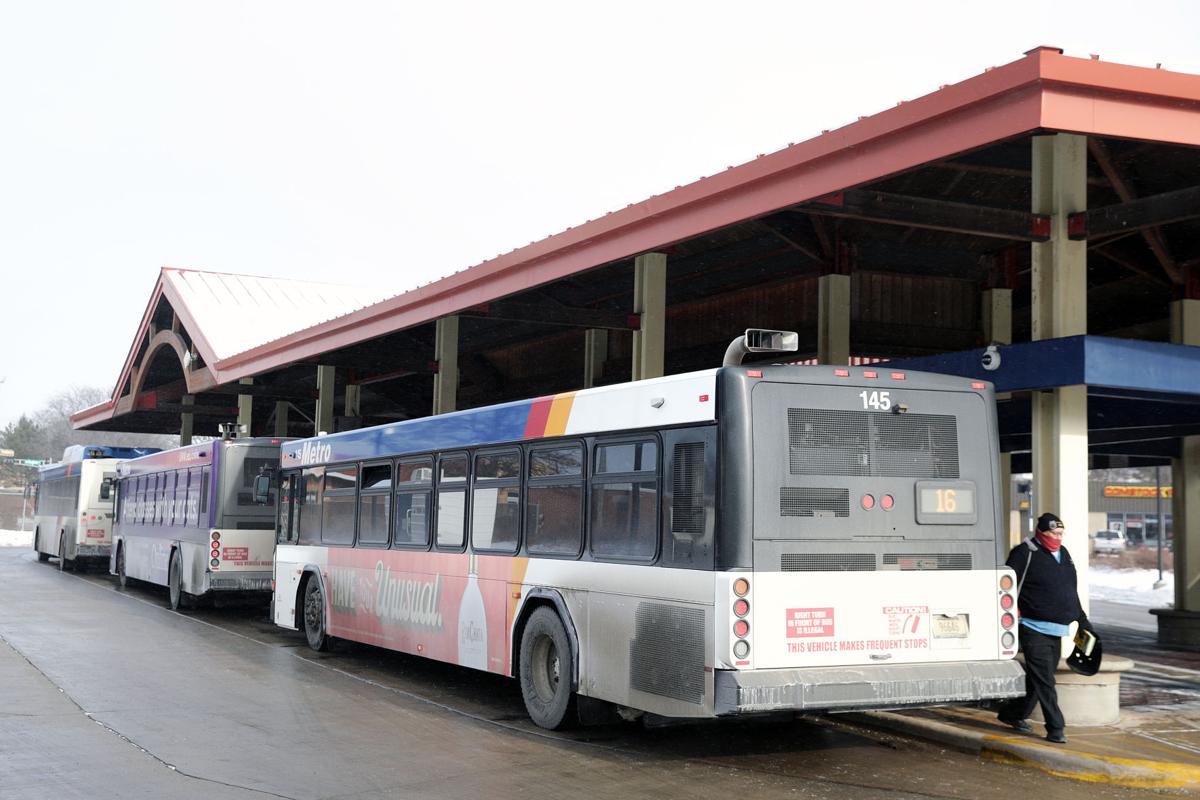 A bus driver ends his route at the South Transfer Point in Madison.

A redesign of Madison’s Metro Transit bus system is prompting officials in Fitchburg and Middleton to weigh major changes to their bus service, including providing supplemental transit services to fill in possible gaps caused by the redesign.

The dilemma posed by the redesign, which is coming in 2023, is whether those burgeoning suburbs south and west of Madison should gear their bus routes toward “ridership,” which stresses running buses on fewer routes but more often, or “coverage,” which delivers service to as wide an area as possible. Metro Transit provides the buses, but the cities pick the routes.

Madison’s Transportation Department is currently drafting a redesign for the city that leans toward ridership. The redesign is meant to dovetail with bus rapid transit, or BRT, a transit makeover that will focus service in high-density areas and eliminate transfer points.

While BRT won’t extend to Fitchburg and Middleton, the redesign does, and how it will fall between ridership and coverage is at the discretion of their respective city councils.

“For example, some of the one-way loops and deviations in the route aren’t sustainable long term,” Cechvala said. “They don’t accommodate future growth in those cities. They’re also harder for people to use.”

At a recent meeting of Middleton’s transportation committee, Cechvala laid out hypothetical maps of what a ridership approach would look like compared to a coverage approach, in addition to options in between.

A “pure ridership” redesign could have buses doing continual loops around the city every 30 minutes during the day. At peak times, another route could extend to low-income housing and other apartment buildings along Highway M in the city’s northeast corner, then loop back into the southern part of the city via Gammon Road.

A hypothetical “pure coverage” redesign, on the other hand, could have routes every hour during non-peak times that split into two and serve a larger swath of the city all day, including the apartment buildings along Highway M.

The city council has the final say on the new routes, but some committee members balked at reducing service to Highway M, currently served by routes 70 and 72.

Ald. Susan West, 6th District, who sits on committee, said in a later interview she is frustrated with the ridership-versus-coverage choice Metro has laid out. Metro is trying to force a boost in ridership rather than bring quick transit to as many people as possible, West argued.

“What I could actually see is one or two buses circling parts of Middleton fairly continuously and having a transfer point somewhere in two spots,” West said.

That approach would go against Madison’s ridership-focused plan, which seeks to eliminate transfer points altogether.

“I’m trying to look at it as efficient bus service for our customers, and that means good coverage,” West remarked.

Yet Robert Burck, an alderman for Middleton’s 2nd District, said a ridership-focused approach aspires to be more efficient and popular. The city’s long, circuitous routes dissuade people from using the bus, he argued.

“If we are sending buses around empty, that’s not serving anybody’s interests,” Burck said. “For it to be efficient, help pay for itself and be valuable to our residents, it needs to be well utilized.”

Planning for the redesign is slightly further along in Fitchburg. The city’s transportation and transit commission recently designated “transit priority areas,” sites of high transit use and prominent destinations that include Fish Hatchery Road, Rimrock Road and Verona Road.

Through the redesign, the city hopes to offer more direct service to UW and Downtown Madison, the destination of 50% of Fitchburg’s riders, said Andrew McFadden, the city’s transportation engineer.

“I think the ridership model is helping those users get to attractions or jobs or other things faster,” McFadden said. “The question will be how do we also get between places in the city as well. We haven’t figured that out yet, but I don’t know if that’s necessarily part of the redesign.”

The need to maintain intra-city coverage has led Fitchburg and Middleton officials to not rule out supplementing their transit services in the coming years. A micro-transit service could be on the table in Fitchburg, McFadden said, and in Middleton, officials think a secondary bus system might be needed.

“That might be where we need to go,” West said. “I know cities our size have bus services. So it’s doable. We just haven’t looked into it.”

Initial maps of the new bus routes will be made available to the public next year, officials said. From there, Fitchburg and Middleton plan to arrange opportunities for the public to give their input on any new routes.

“We’re planning a series of public outreach events as soon as the preferred network is released,” McFadden said. “In early 2022, there will be multiple public meetings to get an understanding from users of how these changes will affect them.”

In Middleton, West said the city has had previous success surveying the community on the master planning process for Middleton Municipal Airport.

“A survey done that way I think would be good, where we send it to select people randomly throughout the city. Then we open it up to everyone,” she said.

While I only started at the State Journal as a breaking news reporter in August, my four short months here haven't lacked exhilarating stories and in-depth dives into the community.

My very first day on the job the United States pulled out of Afghanistan. Though naturally I didn't expect it, the ripple effect of that withdrawal colored my reporting at the State Journal more than anything else.

I've highlighted two stories regarding Afghanistan for this collection. The first is a story my colleague Emily Hamer and I wrote about conditions faced by Afghans at Fort McCoy, the U.S. Army base in Sparta that has housed nearly 13,000 refugees since the withdrawal.

The second is a profile of local Afghan War veterans (also written by Emily and me) and their reflections on the twenty year conflict's legacy. That story ran on Veterans Day.

The rest of my reporting in Madison has bounced from features, spot news and crime stories.

My recent profile of the Latino residents on the city's North Side is likely my favorite story of the year. I made it a personal priority to help cover the city's Latino community when I arrived in Madison. I hope this portrait of sluggish economic development on the North Side is one of many stories to come.

Another story I enjoyed covering was the "commencement ceremony" thrown for the Class of 2020 in September. Over a year delayed, that event was my first time at Camp Randall and really reminded me of how much tradition young people were denied throughout the pandemic.

Finally, I included my coverage (with an assist from Kelly Meyerhofer) of the Kyle Rittenhouse verdict. It was hard to know what the trial exactly meant for Madison. But activists at Penn Park that night felt there was a double standard between Rittenhouse's ordeal and how the Madison Police Department had responded to incidents involving Black teenagers in the weeks before the verdict.

'What did I lose two legs for?' Wisconsin veterans not ready to move on from Afghanistan

Serve as many bus riders as possible -- Daryl Sherman

A rider runs to catch a bus at the South Transfer Point in Madison. A coming redesign of Metro Transit's routes would do away with the transfer hubs.

A bus makes a stop at South Ridge Way and Highway Q, in Middleton. Officials in Middleton and Fitchburg are weighing whether a redesign of bus routes should focus on running fewer buses more often or spreading out coverage. 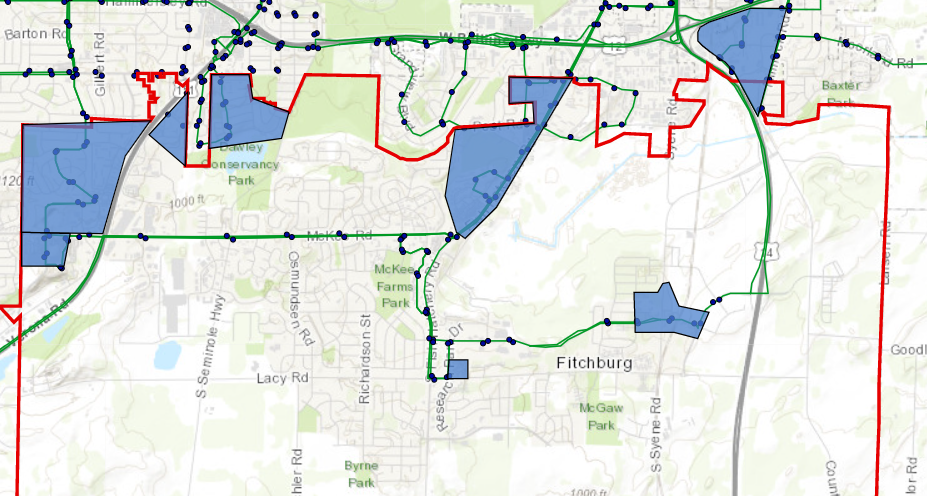 A map of transit priority areas for Fitchburg. Created by the city's transportation commission, these areas around Fish Hatchery Road, Rimrock Road and Verona Road have historically high transit use and popular destinations. 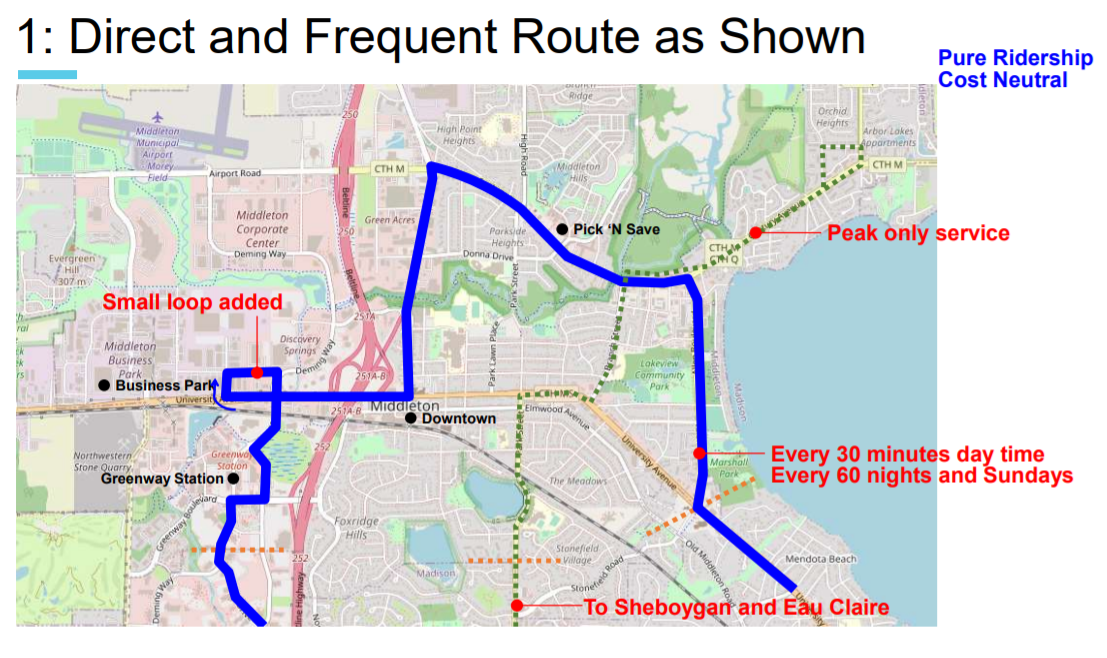 A hypothetical map of a "pure ridership" approach for Middleton's bus system. 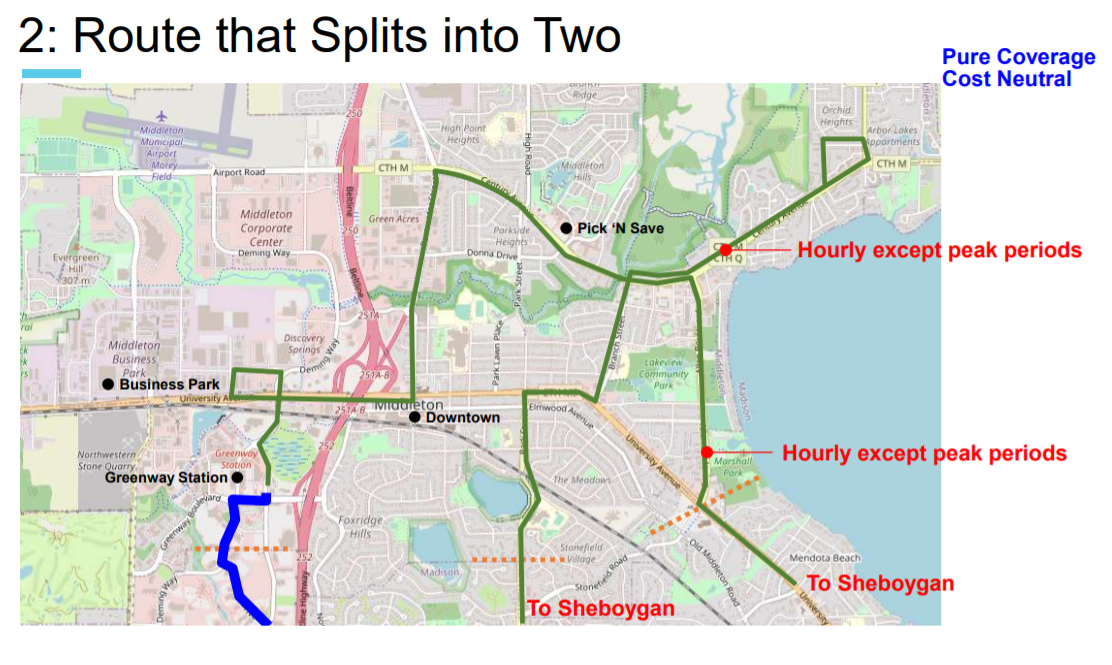 A hypothetical map of a "pure coverage" approach for Middleton's bus system.

A bus driver ends his route at the South Transfer Point in Madison.