With the state Supreme Court striking down Wisconsin’s statewide stay-at-home order last week, opponents of the measures meant to slow the spread of COVID-19 have now set their sights on local emergency orders, including Dane County’s.

A group of Wisconsin residents filed a lawsuit Wednesday asking a federal court to invalidate local stay-at-home orders and cease their enforcement.

The lawsuit was filed in the U.S. District Court for the Eastern District of Wisconsin against Dane County, city of Madison public health director Janel Heinrich and 20 other Wisconsin officials, including Wisconsin Elections Commission members and Gov. Tony Evers.

The 17 plaintiffs who filed the suit include four Dane County residents, some business owners, and Madison Elmer, the organizer of an April rally at the state Capitol to reopen the state.

The lawsuit alleges the state and local stay-at-home orders violate the plaintiffs’ civil rights to freely assemble and to freely exercise their religion. It also claims constitutional protections against excessive government intervention through the Establishment Clause have been violated, as well as freedom of speech and right to equal protection under the law. 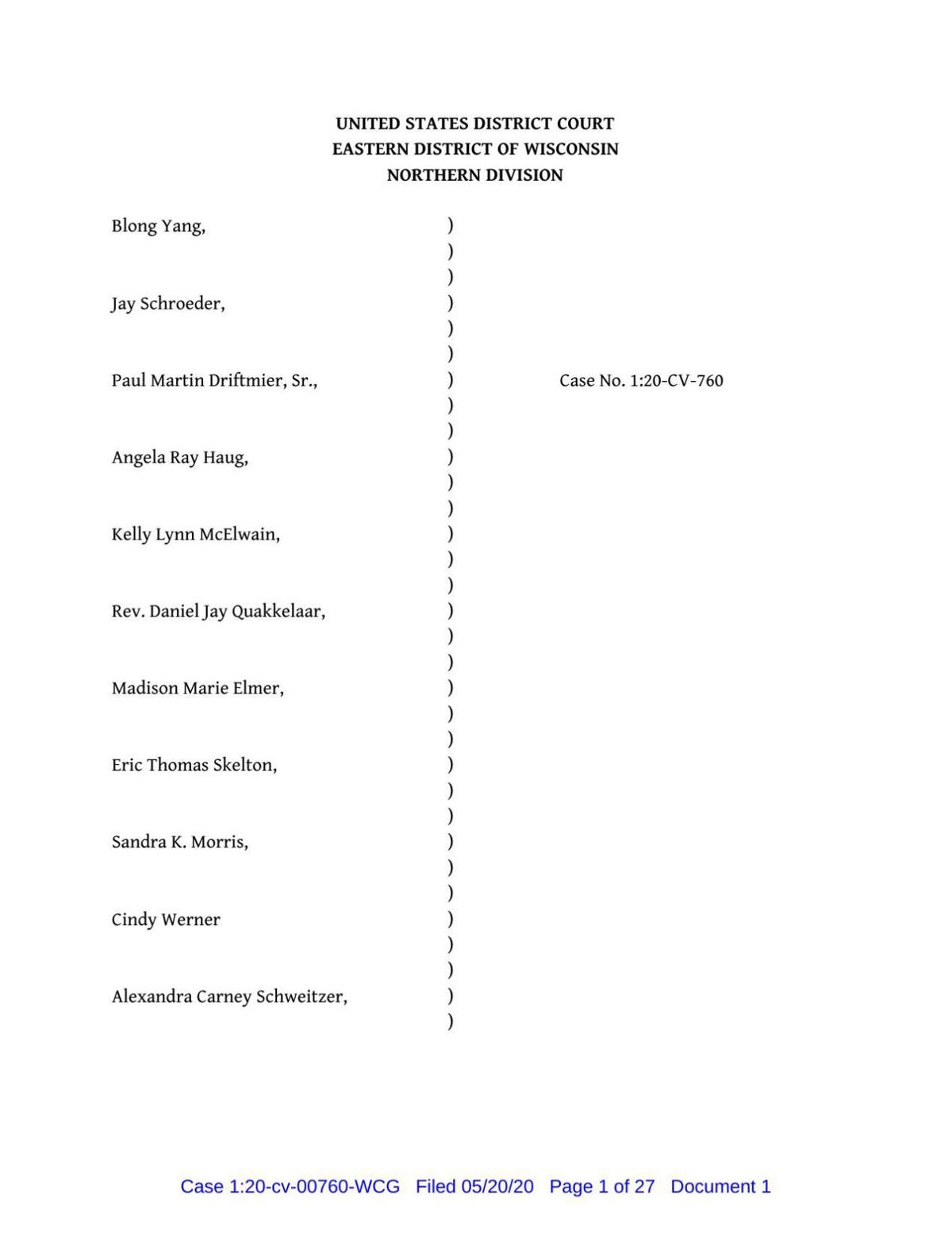 Two of the plaintiffs are Republicans seeking political office: Jay Schroeder, who is vying to represent the 55th state Assembly district, and Cindy Werner, who plans to challenge Democratic U.S. Rep. Gwen Moore in the 4th Congressional District, which covers Milwaukee.

They say the state’s stay-at-home order and the local orders have unlawfully prevented them from gathering the required number of signatures for ballot access.

Ryan Nilsestuen, Evers’ chief legal counsel, said in a teleconference call with reporters Thursday the state will be defending against the lawsuit and that he believes it should be dismissed.

“Local public health officers have been on the front lines in dealing with the disease and now unfortunately they’re being put at the front lines of the litigation involving these, but I’m optimistic that this lawsuit will go nowhere,” Nilsestuen said.

The lawsuit comes after Public Health Madison and Dane County announced the county’s reopening plan, which replaces the statewide plan struck down by the Wisconsin Supreme Court.

The order, called “Forward Dane,” mandates a phased-in approach to the size of public gatherings and the number of people allowed at one time into stores, restaurants and other venues — all based on the county’s ability to meet a range of criteria on testing, new cases and other health metrics.

The county is currently in the “prepare for safe reopen” phase and could move into the first phase of the four-phase plan as early as Tuesday. For that to happen, the county must be meeting specific benchmarks for nine criteria, including contacting 70% to 85% of all new cases within 48 hours of test collection and conducting 400 to 800 tests per day. As of Monday, the county was meeting that threshold, but new ratings are due Monday.

In a statement, Dane County Executive Joe Parisi highlighted the fact that COVID-19 has claimed almost 500 lives in the state and 94,000 across the country, and is the greatest threat to safety this generation has experienced.

“We will vigorously defend common sense provisions based on public health guidance to protect the well-being of the residents of Dane County,” Parisi said. “We do not want to become the next large community consumed by the ravages of this highly contagious, debilitating virus.”

Other defendants in the case include the cities of Milwaukee, Racine and Appleton; Outagamie, Winnebago, Green and Rock counties; the Grand Chute Police Department; Capitol Police; and Department of Health Services secretary-designee Andrea Palm.

The plaintiffs are represented by Joseph W. Voiland of Veterans Liberty Law, which is based in Cedarburg. Voiland served as an Ozaukee County Circuit Court judge from 2013 to 2019.

The four plaintiffs from Dane County are Martin Driftmier Sr., of Verona, who runs his own business; Angela Ray Haug, of Windsor, who runs a hair salon; Kelly Lynn McElwain, of Sun Prairie, who is a salon stylist; and Anna Alethia Manning, of Sun Prairie, who conducts business at a studio in Waunakee. They say the local and state orders stripped them of their rights and have damaged their businesses.

The statewide “safer at home” order was overturned on May 13 in a 4-3 vote by the Wisconsin Supreme Court.

State Attorney General Josh Kaul said after the decision that local orders were still legal if there was an ongoing public health emergency in a specific locality.

Only a handful of local “safer at home” orders remain in place, including in the cities of Racine and Milwaukee, and in Dane County.

The Racine Journal Times contributed to this report.

As gyms reopen, are members ready to return?

More than two months after they were forced to close, Wisconsin gyms are preparing to reopen under strict infection control measures. But are people ready to return?

Most businesses will be able to operate at 25% capacity starting Tuesday after Dane County announced Friday it reached the benchmarks to move into the first phase of its reopening plan.

A suspect was taken into custody after a shooting Friday night on the North Side left a person hospitalized in critical condition, Madison police reported.

Vehicle damaged by shots fired by person in other vehicle on Far East Side, Madison police

A vehicle was damaged by gunshots fired by a person in another vehicle Friday night on the Far East Side, Madison police reported.

The County Board chairwoman and council president said "sending the letter hours before Phase 1 goes into effect impedes our public health department."

Judge William Griesbach on Monday dismissed the challenge, saying those bringing it improperly joined all of the defendants into one lawsuit.