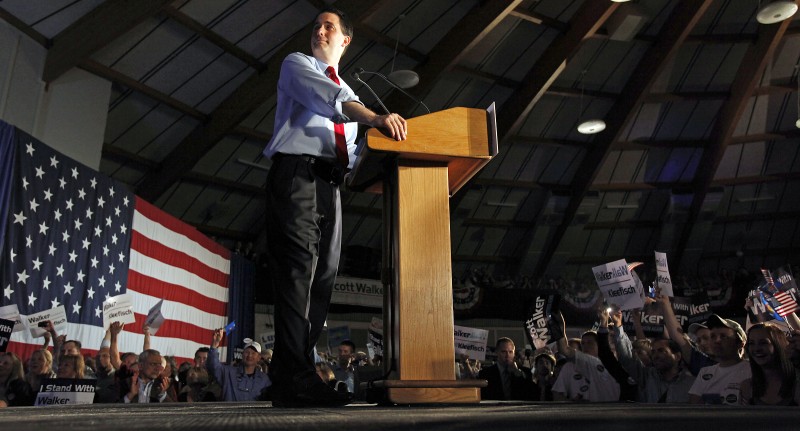 Wisconsin Gov. Scott Walker turns back to smile at his wife and sons while giving remarks at a recall election night party at the Waukesha County Expo Center on Tuesday evening, June 5, 2012. 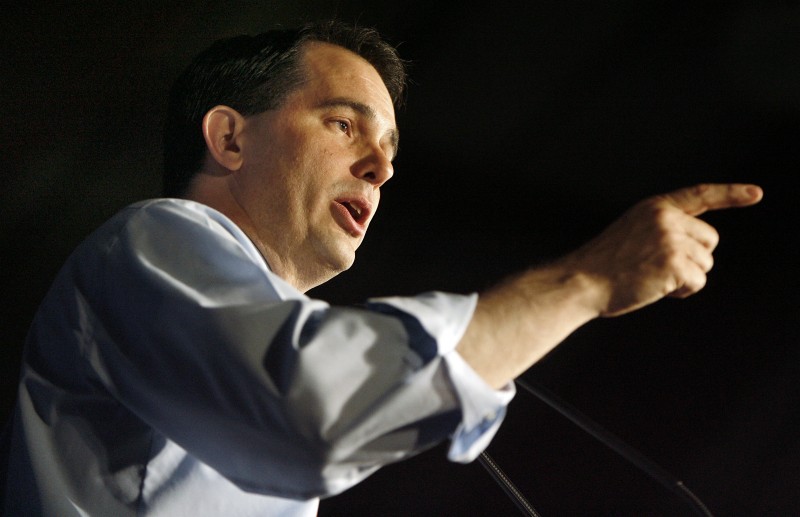 The results were seen by the triumphant governor and his supporters as affirmation of Walker's leadership, which has been under attack for the past 16 months.

Walker took the stage late Tuesday for a rousing victory speech to chants of "Thank you, Scott." He said the message was "voters really do want leaders who stand up and make the tough decisions."

The governor quieted the rowdy crowd when he mentioned his opponent, Barrett, striking a note of unity.

Walker said one of the first things he would do following his win is meet with his cabinet and discuss the moves needed to move the state forward. The governor also said he planned to invite the Legislature to a sort of "brat summit" at which they can begin making peace with one another. Walker did not provide details on such a meeting.

National news outlets began calling the race for Walker just before 9 p.m., a stunning end to an election that just an hour earlier was deemed a close race based on exit polling.

Barrett supporters had clung to hope that giant turnouts in Madison and Milwaukee — where some wards ran out of ballots and registration forms — would tip the race for the Democratic challenger.

The Government Accountability Board said voters were still casting ballots in the Milwaukee area as of 9:30 p.m. But at 10:15 p.m., Barrett conceded.

The mayor said he had called Walker to congratulate him and urged the crowd at the Hilton Milwaukee City Center that they must "look to the future."

"Our challenges are real. We are a state that has been deeply divided," Barrett said. "And it is up to all of us — our side and their side — to listen. To listen to each other. And to try and do what is right for everyone in this state."

"We knew there was a silent majority out there," said state Rep. Robin Vos, R-Rochester, a crowd of supporters chanting "Walker" and "Six more years" standing behind him. "They were silent until tonight. The results can be taken as nothing less than definitive."

Charles Franklin, director of the Marquette University Law School poll, noted the "geographically widespread win" in which Walker took all but 12 of Wisconsin's 72 counties.

Wisconsin's gubernatorial recall marked only the third time in the country's history that such an effort made it all the way to the polls. The previous two targets — Gray Davis of California and Lynn Frazier of North Dakota — both lost.

Walker managed to win thanks to widespread support outside of Madison and Milwaukee and with the assistance of a record-shattering campaign war chest. Using a quirk in election law allowing unlimited campaign donations for recall targets, the governor alone raised more than $30 million, about six times as much as Barrett.

"If it turns out that they've been victorious tonight, I think it's another lesson for all of us that money has an extraordinarily strong influence in campaigns," said state Rep. Mark Pocan, D-Madison. "When you don't have a balance in campaign spending, all too often money speaks the loudest."

John Matthews, executive director of Madison Teachers Inc., the local teachers union, echoed that sentiment. "People are devastated," Matthews said. "The big money came from out of state and bought this election."

It remains unclear if Walker's victory will end the divisive chapter in state history that began in February 2011 with the passage of the governor's landmark collective bargaining bill, featured some of the biggest protests in recent memory and resulted in more than $110 million in campaign spending.

"My only hope is … that Gov. Walker realizes that he's the governor of Wisconsin — not Mr. May calendar boy for the conservative movement," Pocan said. "It's time that he comes back to Wisconsin and takes on issues that matter to real people in the state, and not just appeasing the national conservative special interests."

The governor was not the only Republican winner Tuesday. Lt. Gov. Rebecca Kleefisch and at least three of four GOP state senators facing recall won their races.

Tuesday marked the second time in less than two years that Walker beat Barrett for the state's top job. The governor topped Barrett in 2010, 52 percent to 46 percent. He won that election promising to pare government and re-energize the state's sluggish economy.

He took charge even before officially taking office, killing some $800 million in federal money for a Madison-to-Milwaukee passenger train by simply threatening to do it.

Walker also authored a budget that wiped out a $3.6 billion deficit by, in part, cutting $1 billion from education and making sharp cuts to health programs.

But the centerpiece to his first year in office was his proposal to essentially end collective bargaining for most public employees and require them to contribute more to their insurance and pensions. The governor long argued such moves were needed by local governments and school districts to help balance out-of-control budgets.

His measure caused widespread protests, bringing tens of thousands to the state Capitol for days on end and leading the entire Senate Democratic caucus to flee the state in an effort to stall the bill's progress. The measure eventually passed, but fallout from the bill led directly to two rounds of recalls, the first of which left the state GOP so weakened that Republican legislators were unable to pass their key economic legislation during the last session.

Larry Sabato, director of the University of Virginia's Center for Politics, said the overriding message from Tuesday's election was that many Wisconsin voters are sick of the "recall madness," which has led to recall elections against 13 state senators, Walker and Kleefisch.

"People are tired of recalls, and they don't think a recall was justified," he said.

But Mike Tate, chairman of the Democratic Party of Wisconsin, said that he did not regret attempting to recall Walker.

"Obviously we're disappointed in the outcome, but I think the important thing to keep in mind is that this is a fight that was worth waging," Tate said.

With the music of a solidarity sing-a-along rising nearby on the Capitol Square, Jesse Gustafson read the news on his phone and his shoulders …

How AP calls elections before all the votes are in

The call came at 9:05 p.m., just over an hour after polls closed in Wisconsin: Republican Gov. Scott Walker survived the recall election and d…

A collection of key stories about the Wisconsin recall elections in 2011-12.

Lt. Gov. Rebecca Kleefisch survived a historic recall attempt Tuesday, turning back her Democratic challenger and avoiding becoming the first lieutenant governor in the nation's history to be recalled.

Wisconsin Democrats moved ahead Wednesday with plans for running the state Senate, even though the crucial recall contest they say handed them a one-seat majority remained too close to call.

Dispatches from Walker country: Voices outside of Dane County tell the tale

Whether it was in the small Marathon County village of Hatley, a town hall in Portage County or main drags east and northeast of Madison, many knew weeks or even months ago who they would vote for in Tuesday's historic election.

This HTML interactive on the 2012 presidential election has a calendar of upcoming key events over the next 60 days before Election Day.

From the archives: Walker recall election, one year later

Wisconsin Gov. Scott Walker turns back to smile at his wife and sons while giving remarks at a recall election night party at the Waukesha County Expo Center on Tuesday evening, June 5, 2012.