It's on, Wisconsin: Expect campaigns to ramp up efforts now that state is in play
Share this
{{featured_button_text}}
1 of 2 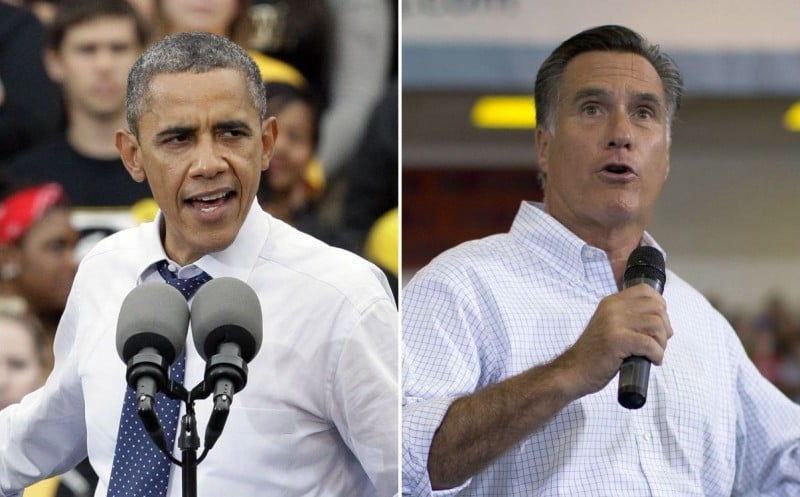 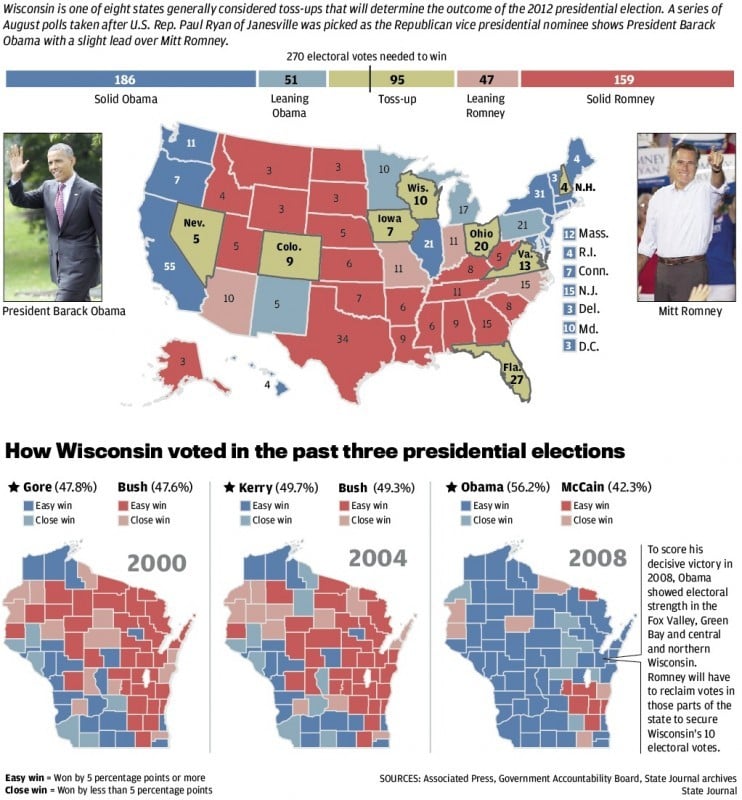 Wisconsin just couldn’t stay out of the national political spotlight.

Following the pick of U.S. Rep. Paul Ryan of Janesville to join the GOP ticket as Mitt Romney’s running mate, the presidential race has tightened to the point that Wisconsin now is widely considered a key battleground state.

That means television advertisements by candidates and outside groups soon will flood the airwaves, robocalls will pour into phone lines, and candidates and their surrogates will pick up their visits to the state in a sprint to the Nov. 6 election.

A Republican hasn’t won Wisconsin’s electoral votes since 1984, when Ronald Reagan beat Walter Mondale. But the Ryan pick has boosted Romney to within a few points of President Barack Obama, recent polling shows.

"It’s very close to a tie between the two parties," said Charles Franklin, director of the Marquette Law School Poll. "Both campaigns are much more likely to treat it like a battleground."

Some commercials are expected to begin airing Sunday. Both the Romney campaign and a pro-Obama PAC announced plans to start advertising in Wisconsin as soon as Sunday. Vice President Joe Biden also will be campaigning Thursday in western Wisconsin , although the destination was not revealed Saturday.

Madison-based Democratic pollster Paul Maslin, who is currently doing polling work in Wisconsin’s U.S. Senate race, said while many people assume the driving force of the Ryan pick was not geography, he suspects the Romney campaign was aiming to fight for Wisconsin’s 10 electoral votes.

"He put 10 into play that weren’t before," Maslin said. "Ryan was the only guy who could definitely add a state into the mix."

"Wisconsin could put us over the top," Newhouse said.

The seven other generally accepted toss-ups are Florida, Ohio, Virginia, Iowa, Nevada, Colorado and New Hampshire. If Romney cannot win Wisconsin, he would need to win most of the others.

Franklin said his recent Marquette poll shows independents could tip Wisconsin for Obama, but they also could hurt his chances of winning here.

"A fairly small percentage could go for either candidate, flipping the state by one or two percentage points," Franklin said.

Still, Republicans have been emboldened by the recent wave of GOP victories here.

"There’s something going on in Wisconsin. The grass-roots army that we have built in Wisconsin, they’re crushing it out there," said Rick Wiley, political director of the Republican National Committee and former executive director of the state GOP. "It’s a state that has truly turned a corner. It’s ripe."

The work Gov. Scott Walker and his supporters did during the recall could benefit the GOP ground game — political shorthand for the volunteers who help turn out voters and promote a candidacy — during the next two months.

"Walker showed that the GOP can come with a ground game, it’s going to help Romney," said Joe Heim, UW-La Crosse political science professor. "It has added to the enthusiasm among Republican voters."

But Democrats insist they are optimistic about Obama’s prospects here. They point to his double-digit victory four years ago. And they say the Walker recall motivated supporters and helped the Obama campaign build its volunteer network, too.

"The truth is the recall has had a motivating effect on our side as well," Obama spokesman Ben LaBolt said.

LaBolt added that the more Wisconsinites learn about Ryan’s policies — such as tax cuts for the wealthy and plans to turn Medicare into a voucher system — the less they will like them.

And the Obama campaign is planning frequent visits in the coming two months. Obama has made several stops in Wisconsin in recent years, during his campaign and after taking office: in Green Bay, Madison, Racine, Milwaukee and Manitowoc. His last visit was in February in Milwaukee.

"It’s fair to assume there will be multiple high-profile visits over the next 60 days," said Gillian Morris, spokeswoman for Obama for America Wisconsin.

With just two months left in a close presidential race, each campaign’s ground game is expected to play a key role in winning Wisconsin.

Franklin said the Green Bay and Fox Valley areas will be key. Obama did well there in 2008, but Bush won there in 2000 and 2004. He said Wausau and the area north of it, and the southwest corner of the state, also will be important.

Having it both ways: Small slice of Wisconsin voters supports both Walker and Obama

For all of the hyper-partisanship and divisiveness in Wisconsin politics these days, a small group of people say they back both Republican Gov. Scott Walker and Democratic President Barack Obama.

2012 presidential election: What to expect in the final push to Nov. 6

The political conventions behind them and three debates ahead, Barack Obama and Mitt Romney now race against the calendar toward Nov. 6.

Clinton: Obama is the way to a better future

President Barack Obama inherited a wreck of an economy, "put a floor under the crash" and laid the foundation for millions of good new jobs, former President Bill Clinton declared Wednesday night.

Democrats ridiculed Republican Mitt Romney as a man who "quite simply doesn't get it" Tuesday on the opening night of their national convention.

Trouble with the chair: Eastwood mocked for RNC bit

Paul Ryan delivered a respectable speech that revved up conservatives and introduced himself to other voters Wednesday night, but by omitting factual details on key points he raises questions about his credibility, political observers said.

Romney asks U.S. to 'turn the page' on Obama

Lifted by a show of Republican unity that once seemed so distant, Mitt Romney plunged into the presidential campaign's final 67 days focused more than ever on jobs and the economy, and depicting President Barack Obama as a well-meaning but inept man who must be replaced.

Interactive breakdown of the presidential campaigns

An interactive on the 2012 election with polls, profiles and fundraising data