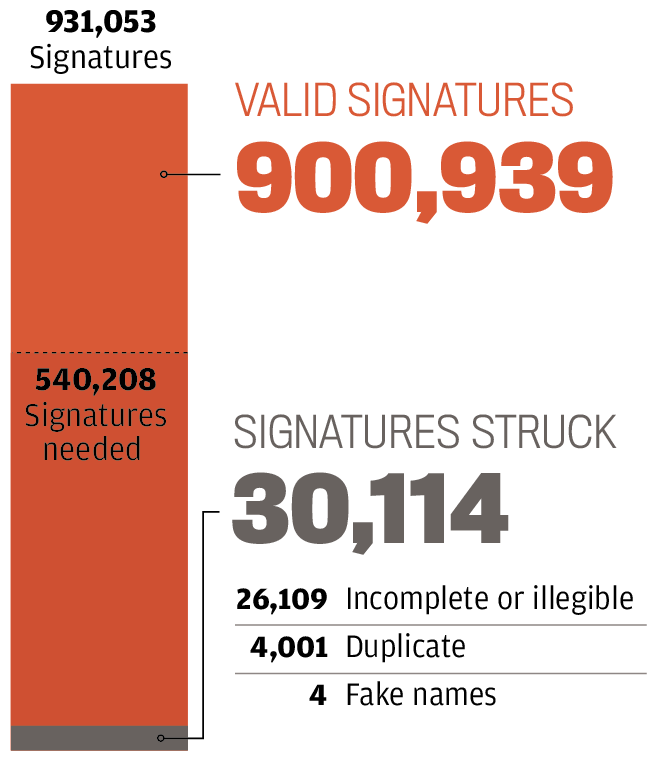 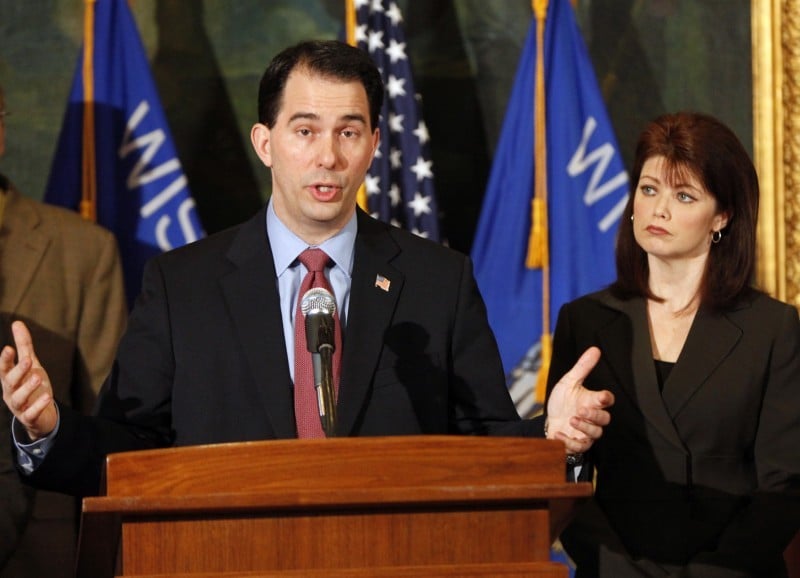 The state Government Accountability Board is scheduled to meet Friday morning to vote on the findings of board staff and set dates for the recall elections.

GAB staff said in a memo released Thursday that 900,938 valid signatures were collected on petitions seeking to recall Walker, and about 808,990 were gathered on those seeking to recall Lt. Gov. Rebecca Kleefisch. The minimum needed to trigger a recall was 540,208 signatures for each of them.

If the board orders elections on Friday as expected, recall primary elections — if necessary — are expected to be held on May 8, followed by a June 5 general election. At least three Democrats are running for governor, and another three have said they are running for lieutenant governor, making primaries likely. Four Republican senators also face recall.

Recall organizers began circulating petitions in mid-November and submitted the signatures in mid-January. Elections officials were granted two extensions to review the signatures, a task that was conducted at a for-a-time-undisclosed state facility in Madison under tight security. The findings from the GAB's review was reported in Thursday's memo.

Several other names that GAB staff members flagged as potentially fictitious were found in the statewide voter registration database or telephone directories, including Princess High and Mohammed Ali, the memo said.

If Walker loses the election, Walker would be the first Wisconsin governor, and only the third governor in the United States, to be recalled. He would join California Gov. Gray Davis and North Dakota Gov. Lynn Frazier.

"This was the greatest petition campaign in American history for a reason: Scott Walker's radical overreach and abuse of power," said Graeme Zielinski, spokesman for the Democratic Party of Wisconsin. "Tomorrow will be a day for sober reflection on the work done and the great work left to do to restore Wisconsin's values."

But Walker campaign spokeswoman Ciara Matthews said the governor was expecting this and is ready to defend his record.

"We have long said that we anticipated the election process would move forward," she said. "Gov. Walker looks forward to contrasting his record of laying the foundation for a more successful Wisconsin while moving the state forward against the Democrats' failed policies."

The board has already found enough valid signatures were collected on petitions that aim to recall four Republican state senators: Scott Fitzgerald, Van Wanggaard, Terry Moulton, and Pam Galloway. Galloway has resigned from the Senate, citing illnesses in her family.

The senators' recall elections would be on the same two dates — May 8 and June 5 — as the Walker and Kleefisch recalls.

Candidates wishing to run have until April 10 to file nomination papers.

One of the five signatures on Gov. Scott Walker's recall petition Wisconsin elections officials thought was a fake person is actually real.

Staff at the Government Accountability Board flagged Fungky Van Den Elzen as a fake name after not finding it on the list of registered voters or phone books. But the board was contacted Thursday by someone who found a Facebook page for her.

That leaves just four fake signatures identified out of more than 931,000 submitted. The board was to vote Friday on ordering the recall election against Walker since nearly 901,000 signatures were determined to be valid.

Staff members of the state Government Accountability Board said in a memo released Thursday that several hundred thousand signatures more than the minimum needed were collected on petitions seeking recalls of Walker and Lt. Gov. Rebecca Kleefisch.

Board members are expected to vote Friday on certifying the elections.

Read the GAB memo below.

Wisconsin elections officials want to make public databases they generated that have the names but not addresses of people who signed recall petitions targeted Republican Gov. Scott Walker and five others.