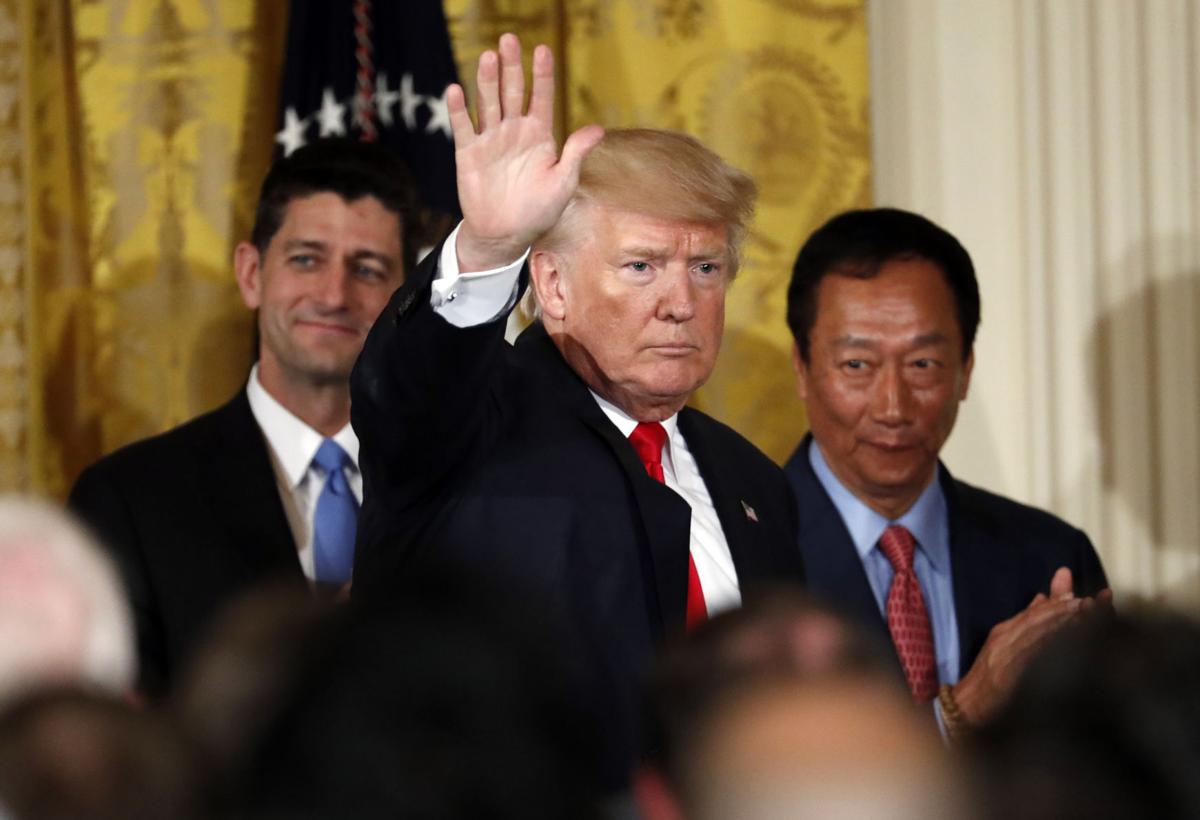 President Donald Trump leaves the East Room of the White House on Wednesday after he announced that technology giant Foxconn would spend $10 billion on a manufacturing complex in Wisconsin expected to generate up to 13,000 jobs. He is flanked by House Speaker Paul Ryan of Janesville and Terry Gou, president and chief executive officer of Foxconn. 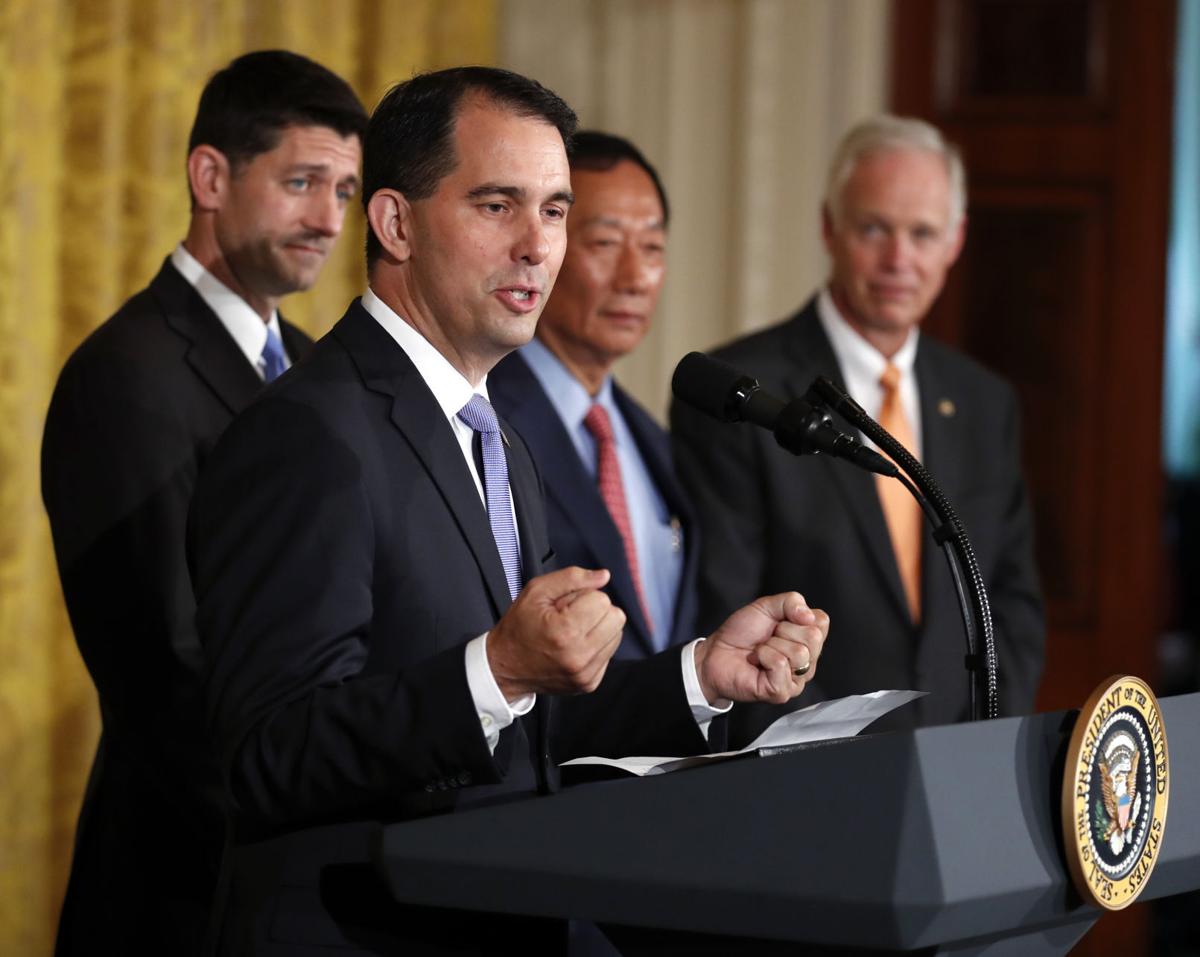 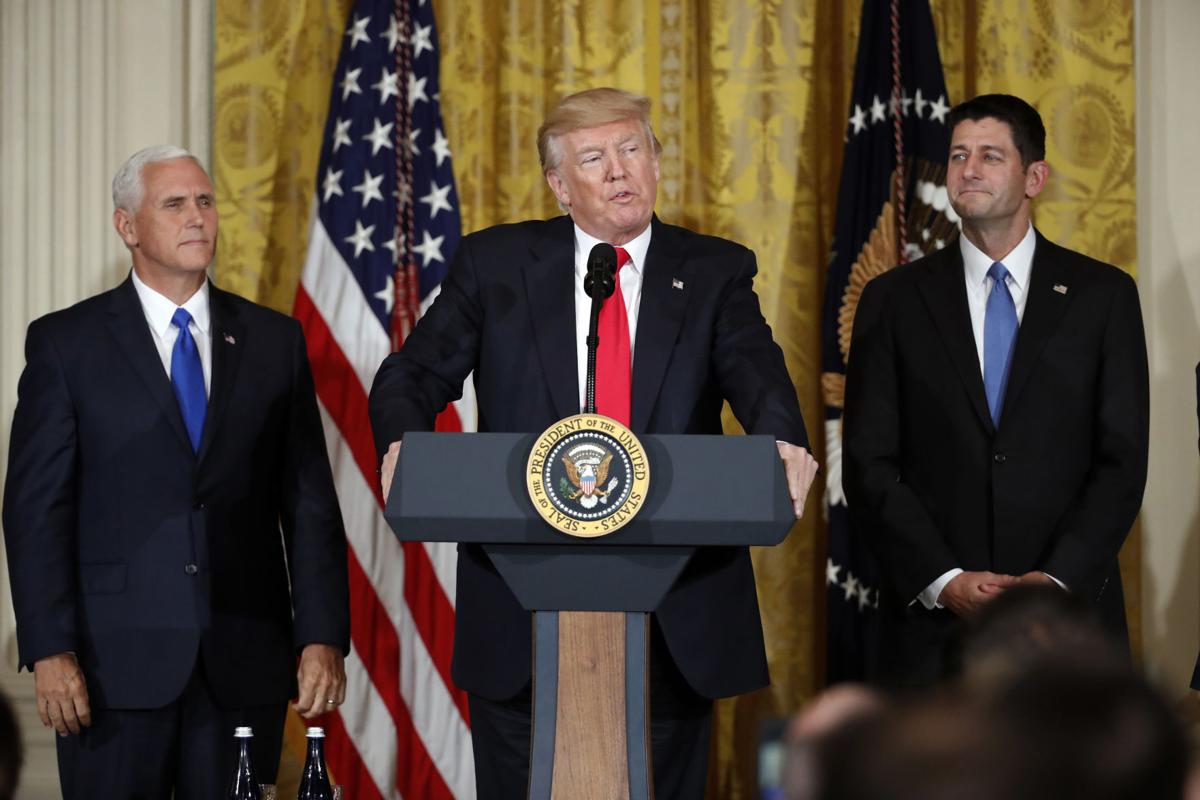 In what’s being called the largest economic development project in state history, Taiwanese electronics giant Foxconn plans to build a $10 billion plant in Wisconsin that would create liquid-crystal display panels and employ as many as 13,000 people.

The planned Wisconsin plant is expected to open in 2020 and be part of a 20 million-square-foot campus on at least 1,000 acres — a location Gov. Scott Walker has dubbed “Wisconn Valley.”

The state would offer $3 billion in economic incentives, Walker said.

The plant — announced Wednesday at a White House ceremony by President Donald Trump, Walker and others — could be the first of several facilities the company wants to build in the United States.

“It starts today with this investment in Wisconsin,” Foxconn chairman Terry Gou said at the White House.

The Wisconsin facility is expected to employ 3,000 people initially and add up to 10,000 more workers in future years.

“Today we’re announcing the single largest economic development project in the history of Wisconsin,” Walker said, noting the plant would be 11 times the size of Lambeau Field. “These panels will be made in America, proudly in the state of Wisconsin.”

Ryan said the planned project is “an absolute game-changer” for southeastern Wisconsin, where his district lies.

Trump, in turn, said his election helped make the deal possible. He said Foxconn is coming “to a state that’s very close to my heart — Wisconsin.”

“If I didn’t get elected, (Gou) definitely would not be spending $10 billion” on the project, Trump said.

There are indications Foxconn was considering a major U.S. investment long before Trump took office, though the company’s plans may only have solidified this year. Foxconn told CNN in 2012 that, as part of its long-term plans, “Foxconn is exploring the opportunity to expand its existing manufacturing operations in the U.S.”

The plant is intended to be one of the largest manufacturing campuses in the world, according to Walker’s office, and could draw 10,000 construction jobs over the next four years while the plant is built.

Walker’s office projected the project would create at least 22,000 “indirect and induced jobs” throughout Wisconsin and will generate an estimated $181 million in state and local tax revenues annually, including $60 million in local property taxes.

Earlier Wednesday, a White House official told reporters the deal signals the country will “not only see a return of those manufacturing sectors” but will be positioned to be “globally dominant within skilled and advanced manufacturing.”

The liquid-crystal display panels could have entertainment, health care, automotive and other uses.

The location of the campus is still being determined, according to Walker’s office, but will likely be in southeastern Wisconsin.

The deal with Foxconn “is a culmination of many months of discussion” between a team of Republicans from the White House, Wisconsin and Foxconn officials, the White House official said.

“This has the opportunity to be one of the largest job creators in U.S. manufacturing,” the official said. “These are excellent-wage jobs and has the ability to create tremendous spinoff benefits as the supply side gets built up around these large manufacturing plants.”

Walker said the Foxconn jobs will have an average annual salary of more than $53,000 plus benefits.

Ryan’s office said in a statement that since June, Ryan has worked with Foxconn officials and governmental officials, including Trump and Priebus, to bring Foxconn to his district.

“Foxconn had potential sites across the country, but the speaker persistently and effectively made the case for Wisconsin and its workers,” the statement said.

UW-Madison chancellor Rebecca Blank also said Wednesday she met with Foxconn officials recently “to promote the State of Wisconsin as a possible destination and illustrate the advantages of having an internationally ranked research partner like the University of Wisconsin-Madison nearby.”

“Today’s decision by Foxconn Technology Group, a top international manufacturer, to locate a plant in Wisconsin is a major leap forward for our state’s economy,” Blank said in a statement. “It also illustrates the importance of a culture of innovation, along with a strong public research university, to regional economic development.”

Walker and state officials have been building an incentive package for weeks to lure Foxconn, a contract manufacturer of electronic products known for making iPhones and iPads. A number of other states also sought the plant.

The White House official said there will be no new federal programs to provide new incentives for Foxconn to build in Wisconsin, but also said the company could be eligible for existing incentives offered by the federal government.

State lawmakers will need to approve the state incentive package for Foxconn as part of the deal. A special legislative session will be called to pass the package, Walker’s office said, which will total $3 billion over 15 years.

A contract between the state and Foxconn will include clawback provisions requiring the company to pay back the tax credits if “jobs and investment are not kept in Wisconsin,” according to Walker’s office.

The $3 billion figure does not include local government incentives. Walker’s office said tax incremental financing is another incentive expected to be part of the project.

Assembly Democratic Leader Peter Barca, D-Kenosha, said Wednesday that lawmakers next month could take up a bill that would provide state incentives for Foxconn.

Economic experts have said such a facility or facilities, even if located in southeast Wisconsin, could create myriad economic opportunities in Dane County.

But some Democratic lawmakers have expressed skepticism about Foxconn’s reported plans.

U.S. Sen. Tammy Baldwin, D-Madison, called the announcement “a promising opportunity” but added “Governor Walker must get this right and make sure this deal works for taxpayers.”

“Any and all taxpayer subsidies must be tied to Foxconn keeping the commitments they have made,” Baldwin said in a statement.

“The bottom line is this company has a concerning track record of big announcements with little follow through,” Sen. Jennifer Shilling, D-La Crosse, said, referring to the company’s 2013 announced plans to build in Pennsylvania that never materialized. “Given the lack of details, I’m skeptical about this announcement and we will have to see if there is a legislative appetite for a $1 (billion) to $3 billion corporate welfare package.”

State Rep. Jimmy Anderson, D-Fitchburg, blasted the deal as a “multibillion-dollar handout” and said “taxpayers should not be subsidizing private corporations at the expense of our children, schools and roads.”

Democratic lawmakers from the region where Foxconn is expected to locate were more receptive to the news.

Foxconn’s plans would fulfill a promise Trump made in June during a visit to Waukesha County, when he said he and Walker were negotiating to bring a “major, incredible manufacturer” to the state.

During a panel discussion with Walker, Cabinet secretaries, students and CEOs, Trump mentioned that he and Walker were negotiating with the manufacturer behind the scenes.

[Editor's note: This story has been updated to reflect a correction. In the original version, the party affiliation of state Rep. Jimmy Anderson was incorrect. He is a Democrat.]

Major economic incentives are part of the deal to lure Foxconn to southeastern Wisconsin, but the manufacturing jobs may not work for the laid…

Landing a deal with Foxconn could be one reason why Gov. Scott Walker sought to break impasse this week, Senate leader says.

The package would not be included in the next state budget, a top lawmaker says.

Assembly GOP leaders, in a memo made public Wednesday, also urge business groups to offer their own ideas to resolve the state budget impasse.

Rebecca Kleefisch says she talked with Foxconn 2 years ago

The lieutenant governor had a "great, general wide-ranging conversation" with officials of the Taiwanese company about what Wisconsin has to offer.

State Journal editorial: Taxpayers need convincing that $3B for Foxconn is worth it

Gov. Scott Walker just got what may be the biggest political boost of his career, and it couldn't have come at a much better time.

Little known to consumers, the maker of iPhones and other gadgets is a giant in the electronics industry thanks to its dominant position in the global manufacturing supply chain.

9 things to know about the Foxconn plant coming to Wisconsin

Foxconn Technology Group's manufacturing plant in Wisconsin will be the first U.S.-based facility for the Taiwan-based electronics giant. Here are some things to know about the plant:

Amazon and Foxconn reflect a growing trend: Deliver it now

Amazon's plans to add 50,000 jobs at a dozen warehouses across the United States and Foxconn's decision to build a $10 billion plant and hire up to 13,000 workers in Wisconsin aren't just feel-good stories of job creation. They reflect the pressures companies now feel to be as close to their customers as possible — a trend that's helping restore some American factories and jobs.

With an aggressive timeline to turn dirt before next fall's election, Gov. Scott Walker took to the air Friday to tout global electronics giant Foxconn's plans to invest $10 billion on a new manufacturing facility in southeast Wisconsin.

A Rust Belt state that built a manufacturing legacy through assembly-line jobs will have to quickly transition to a more highly skilled workforce now that Foxconn has selected Wisconsin as the site of its coveted U.S. electronics plant.

The Taiwanese contract electronics manufacturer has signed an agreement to look at promoting Wisconsin ginseng in Asia.

No decision on a Madison-area Foxconn facility until 2018, a rep says

The Taiwanese electronics manufacturer says, though, it does plan to collaborate with the UW Carbone Cancer Center.

President Donald Trump leaves the East Room of the White House on Wednesday after he announced that technology giant Foxconn would spend $10 billion on a manufacturing complex in Wisconsin expected to generate up to 13,000 jobs. He is flanked by House Speaker Paul Ryan of Janesville and Terry Gou, president and chief executive officer of Foxconn.