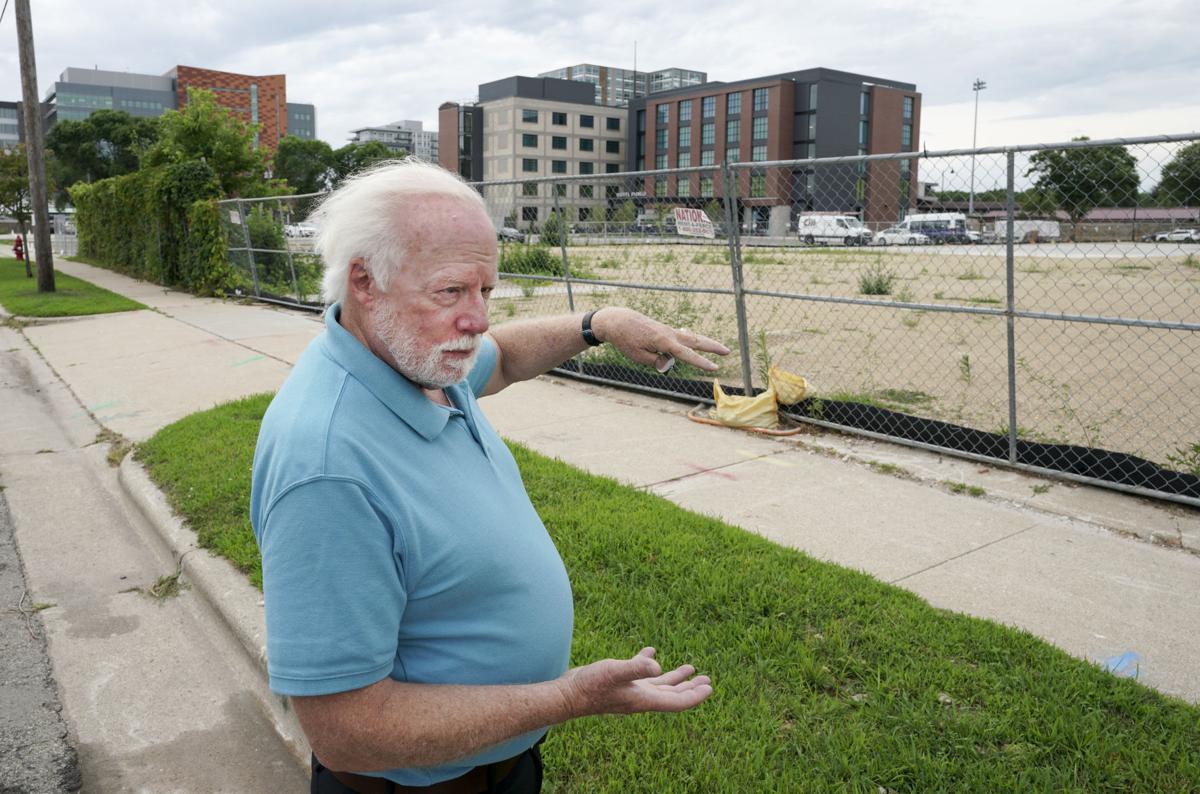 Developer Curt Brink discusses a proposed 10-story housing tower that would be a final piece of Archipelago Village, a multiphase development rising in the 900 blocks of East Washington Avenue and East Main Street. In the background is the initial piece of the project, Hotel Indigo. 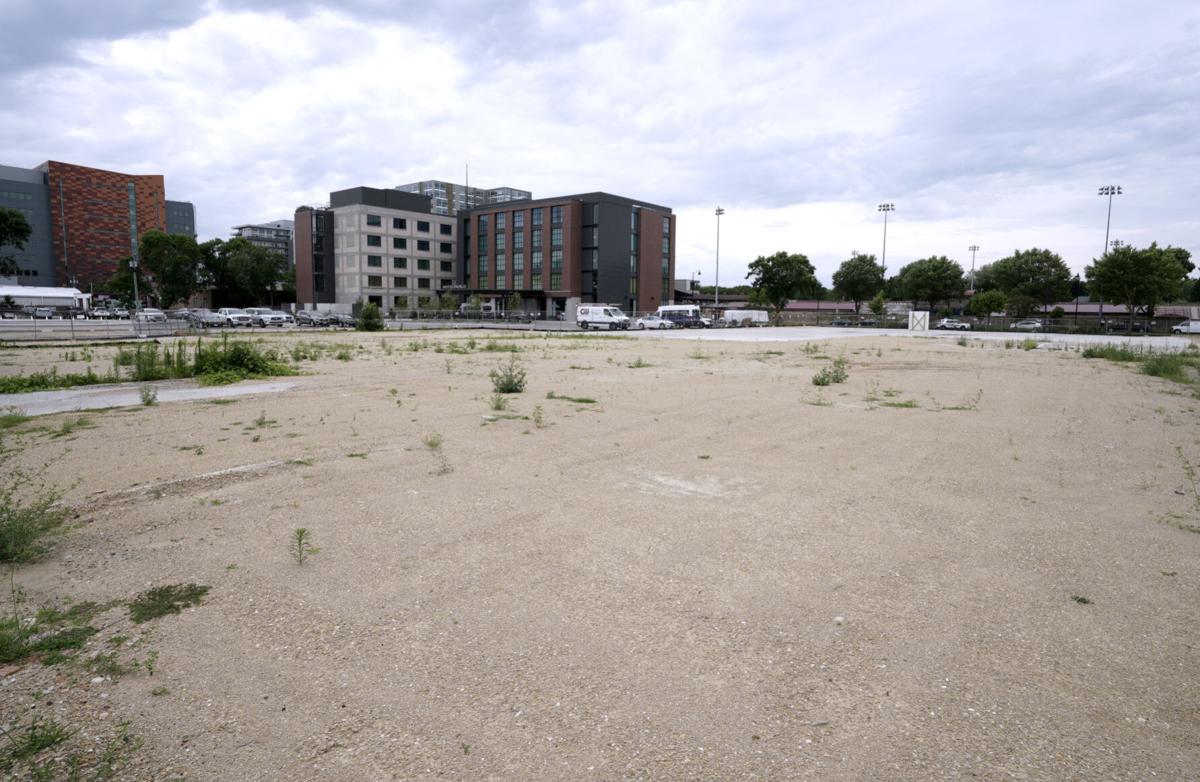 A developer is detailing plans that feature a 10-story housing tower and refurbished vintage building as final pieces of the ambitious Archipelago Village project rising in the 900 block of the booming East Washington Avenue corridor on Madison’s Near East Side.

“Everybody’s been talking about activating the street, but the street is not activated,” Brink said. With the housing, “we get a whole different vibe.”

The big hurdles are likely to be convincing the city to allow the height and new housing in an area zoned for employment use.

Far from cookie-cutter, boutique Hotel Indigo draws from Madison’s past

Already, Brink has renovated the five-story, brick-facade former Mautz Paint building and constructed a contemporary, five-floor structure next door to create the 144-room Hotel Indigo at the corner of East Washington and South Paterson Street.

High-rise glass office tower approved for Madison's Near East Side

In May 2019, he won city approvals for a glassy, 11-story, 230,000-square-foot mixed-use tower that will have office space, a green roof with trees and grass, and commercial space on the first floor to the immediate east of the hotel at 929 E. Washington Ave. The project could begin late this year, Brink said.

Last month, the city approved Brink’s proposed five-story, 92,000-square-foot office building to house the Wisconsin Housing and Economic Development Authority at 902-908 E. Main St., and a 680-space parking garage in the middle of the block to serve various elements of the overall development. That project is slated to begin in the fall, he said.

Madison approves big hotel, office building for Near East Side

“When it’s all done, it’s going to be something,” said Brink, who is partnering with major investors Jim and Marlene Korb.

Brink is scheduled to make an informational presentation on the new proposals to the city’s Urban Design Commission on July 29. The proposal will need Plan Commission approval of conditional uses in the Traditional Employment district and UDC approval for new construction in Urban Design District 8, city planner Tim Parks said.

“I don’t want a piecemeal approach,” she said. “We identified the need to grow employment on the south side of East Washington and that’s still my priority.”

Although the city has prioritized employment uses on the south side of East Washington, Brink believes the need for a vibrant mix of uses, including housing, on the redeveloping south side of the 900 block is clear.

It would be impossible to provide the amount of additional parking required by additional office tenants, Brink’s submission to the city says. The proposed apartment building use would reduce peak traffic and parking stalls needed during business hours while making use of the costly parking structure and green roof during non-business hours, it says.

The residential use also activates the block by providing increased activity during evenings and weekends, while the housing creates a balanced city block where one can work, live and dine out without having to drive, it says.

Developer offers final pieces for mega project on Near East Side

The project will have 20% of its units classified as affordable to those making up to 80% of Dane County’s median income, or $57,550 for a household of three.

The 10-story building follows requirements of Urban Design District 8, with the upper two floors stepped back and clad in a lightweight metal and glass facade to create a unique top for the building, the submission says.

Rummel noted that zoning allows eight stories plus two bonus stories if certain conditions are met. “I’m not a person that gives bonus stories very easily,” she said. “It’s got to have something other buildings don’t have.” 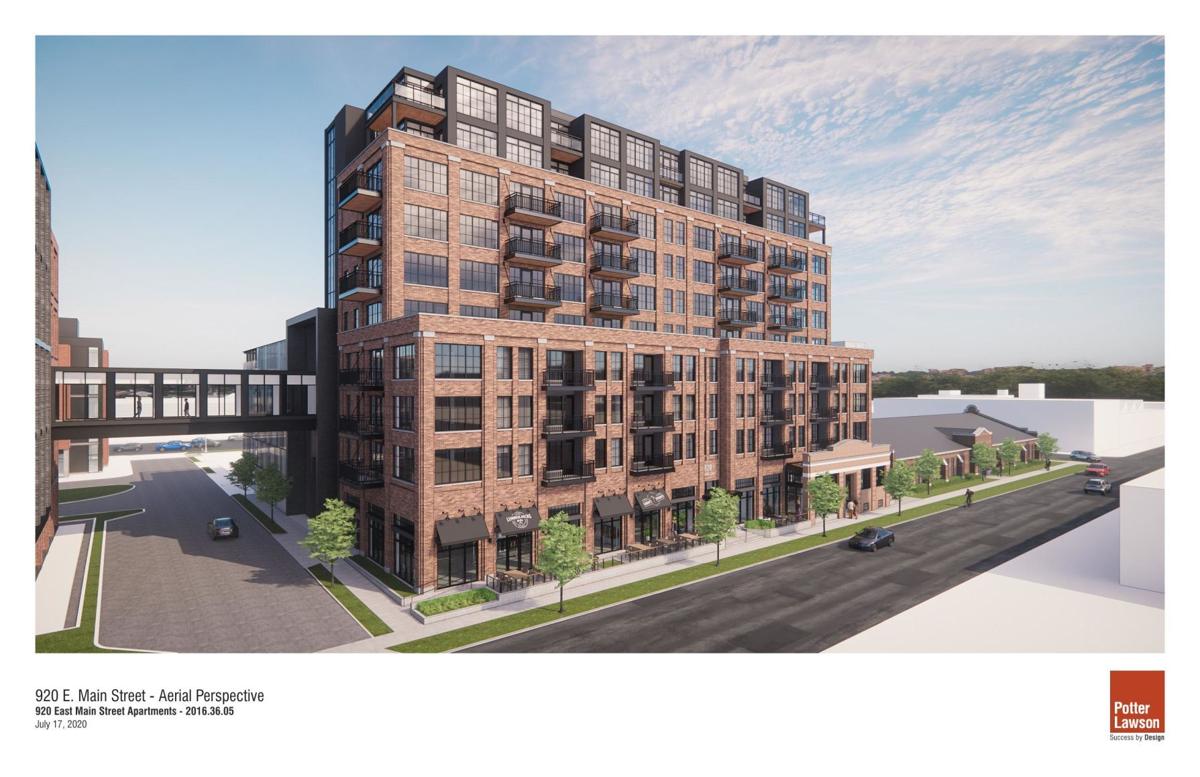 The facade of a former building at 924 E. Main St. that is now in storage after the rest of the building was demolished will be incorporated into the front of the housing tower, plans show.

The Wisconsin Telephone Co. building’s original brick-and-stone facade will be restored, and new windows added to existing openings, Brink’s submission says. He had proposed a five-story building with 25 apartments and more commercial space behind the building but withdrew that element at Rummel’s request. Rummel applauded the move.

Brink said he’ll restore the exterior of the building but hold off on the interior until construction of the larger structures is completed.

“I can’t commit anything to it now,” he said. “It will be commercial space. A lot of people would like to get into it. I don’t know what will go in there yet.”

The city expects to add 70,000 new residents by 2040 and needs to build 40,000 units — about 2,000 a year — to meet demand, but is falling short of those projections and is exploring ways to increase production.

The $5 million will go toward purchasing and renovating 15-17 homes to resell to struggling families who have not been able to afford their own house before.

"East Washington Avenue is a gateway to our city. It is a major thoroughfare, not a race track," said Ald. Marsha Rummel, 6th District.

The Parks Division wants to demolish three buildings on 2.5 acres at the eastern end of the park that were acquired for $3.6 million in mostly federal money in 2017.

Developer Curt Brink discusses a proposed 10-story housing tower that would be a final piece of Archipelago Village, a multiphase development rising in the 900 blocks of East Washington Avenue and East Main Street. In the background is the initial piece of the project, Hotel Indigo. 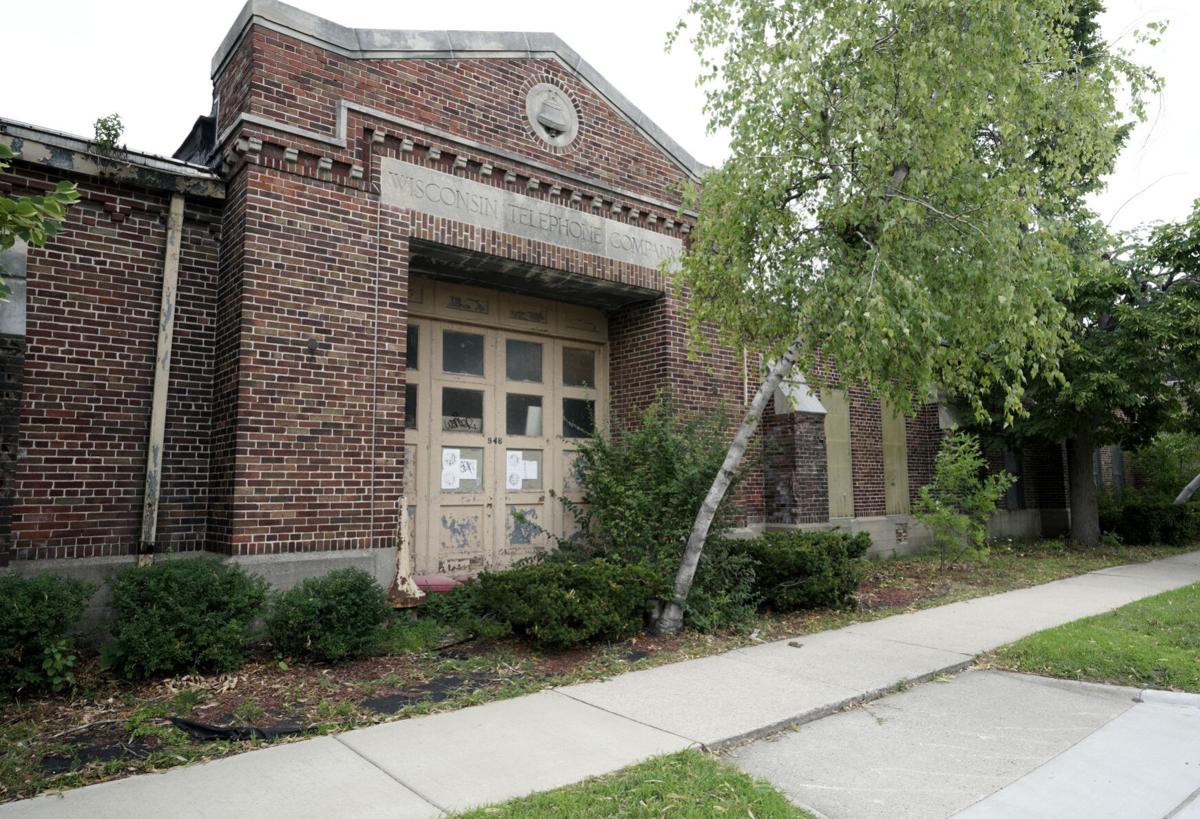