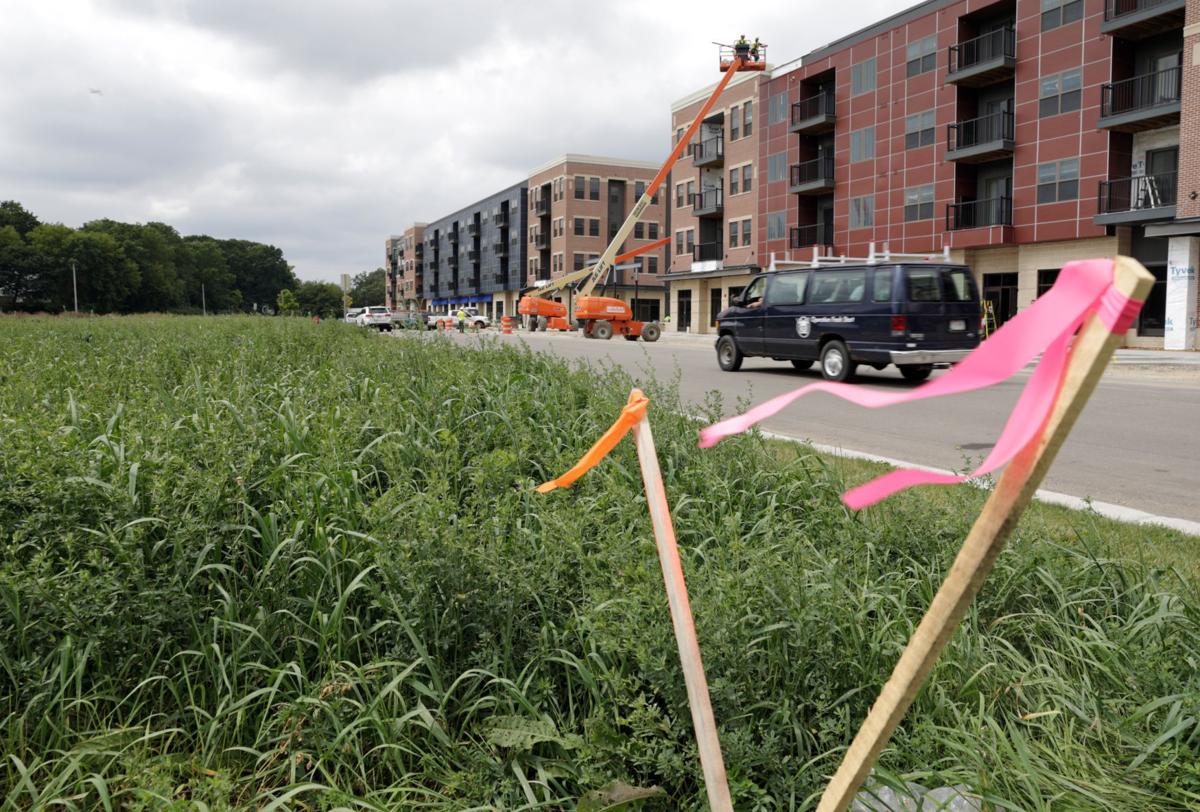 Gorman & Co. is proposing to create housing for grandparents raising grandchildren and other kinship situations on a grassy, vacant lot as the next phase of the Union Corners redevelopment on the East Side. The current phase of housing, right, is nearing completion. 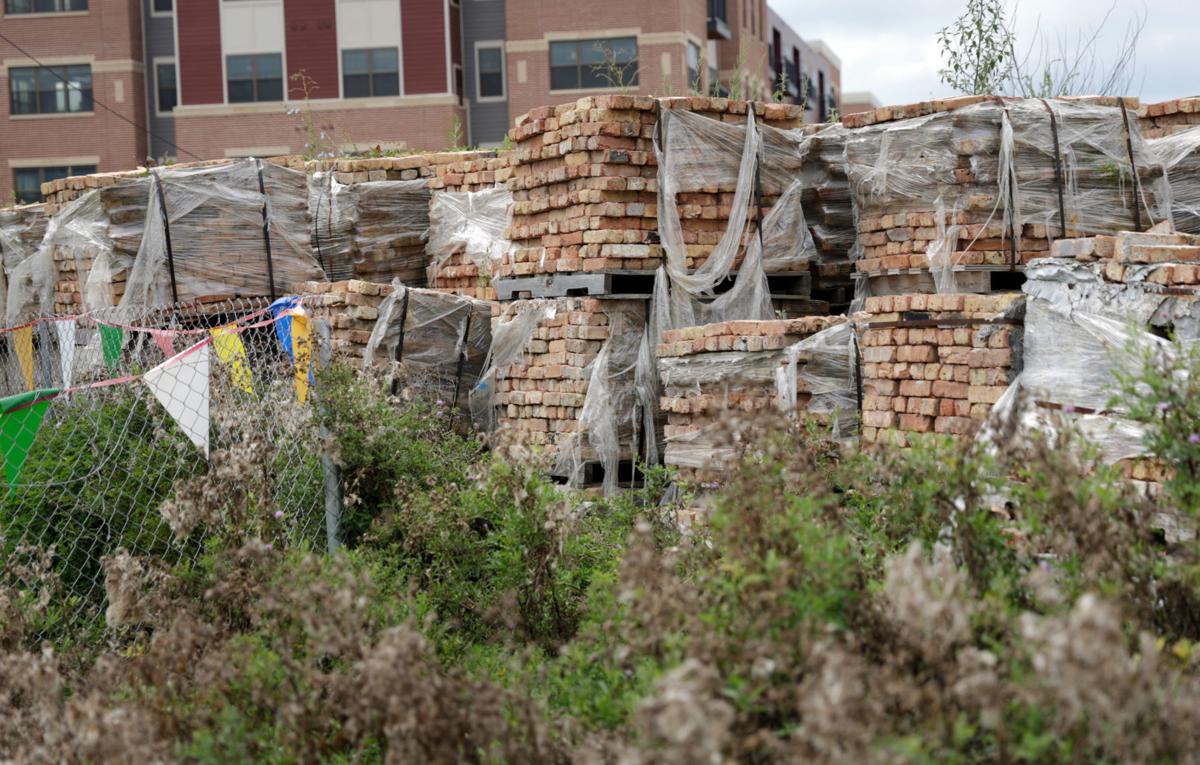 Pallets of old bricks, which have been at Union Corners for years after deconstruction of a building, remain as Gorman & Co. presses forward with a multi-phase redevelopment.

In a first for Madison, a developer is proposing to build housing aimed at grandparents and other extended family members raising children as part of the emerging Union Corners redevelopment on the East Side.

Gorman & Co. and Lutheran Social Services’ proposed $12.5 million “Union Corners Grandfamily” housing would offer 59 lower-cost and market-rate units in two, three-story buildings in a long-vacant field at 2507 Winnebago St. The site is across the street from other pieces of the multi-phase Union Corners redevelopment rising at the corner of East Washington Avenue and Milwaukee Street.

The housing would offer a community room, business center, fitness center and roughly 65 underground parking spaces. Additional outdoor community spaces, including a community garden and playground, are intended to serve the mix of residents from children to seniors.

Lutheran Social Services would provide support services with office space on the first floor of one of the buildings.

The need for such housing is growing with the rise of heroin addiction and other opioid use, with more grandparents and relatives raising children because parents have died, are incarcerated, are using drugs or in treatment, or otherwise unable to care for children, according to Generations United, a nonprofit based in Washington, D.C., that is specializing on the issue.

“These families face a lot of housing barriers,” said Nicole Solheim, Gorman’s development manager. “A lot of times, a situation can arise rapidly. We’re hoping to design housing that fits the family’s needs.”

For generations, substance abuse has led grandparents and other relatives across races, ethnic groups and geographic areas to step in to care for children, and the opioid epidemic is making matters worse, Generations United says. Nationally, more than 7 million children are being raised in households headed by a grandparent or other relative.

Despite challenges, the growing reliance on grandfamilies is best for children whose parents can’t raise them, Generations United says.

Gorman had built a grandfamilies project in Milwaukee in 2011, and Madison officials were intrigued by the concept, Solheim said. There are perhaps only 10 to 15 such projects in the United States, she said.

“We liked the Grandfamily proposal when we saw it,” city community development director Jim O’Keefe said. “It is certainly a unique project, seeking to fill a specific market niche in Madison.”

Even more, the city liked the overall affordability of units, O’Keefe said.

The Gorman/Lutheran Social Services project would have no single-bedroom apartments and a mix of two- and three-bedroom units, and multiple community spaces to create the environment for a natural support group, Solheim said. It also has good access to transportation and services, she said.

The owners would keep two waiting lists for the housing, Solheim said. The primary list would be for grandparents and other extended family members raising children, and the second, used if the buildings aren’t filled, would be for other families, she said.

The city is providing $950,000 for the Grandfamily project, which includes 56 units for those making 60 percent or less of Dane County median income, or $46,000 for a family of three. The Wisconsin Housing and Economic Development Authority will provide $8.1 million in federal tax credits over 10 years.

Gorman will make an informational presentation on its Grand Family Housing proposal to the city’s Urban Design Commission on Wednesday. The developer already has a general development plan approval for Union Corners but needs UDC, Plan Commission and City Council approvals for specific plans. Gorman hopes to start construction in the spring.

The proposal marks another milestone for the unfolding Union Corners redevelopment.

Gorman is now completing construction of the $13.1 million Carbon at Union Corners apartments with 90 rental units — 76 for people with lower income — and 18,000 square feet of commercial space in two buildings north of Winnebago Street. That project should be done in September.

The final phase will be a five-story, mixed-use building with roughly 100 apartments and first-floor retail at the corner of East Washington and Milwaukee Street. Gorman expects to submit specific plans later this year.

The Wisconsin Housing and Economic Development Authority is delivering precious federal tax credits to just three of six city-backed, low-cost developments with a project for the homeless on South Park Street not getting support.

Developer would pay $1 for land valued at $5 million for first four phases of six-part redevelopment.

Construction may begin at long-vacant Union Corners this summer, but a challenge remains

UW Health Clinic hopes to soon break ground on 60,000-square-foot clinic but developer is still negotiating with city on public financial support for the redevelopment.

The efforts, which will help create 109 affordable units in one new project and recommit to another 177 low-cost units, including 58 for the homeless, in three others.

The new plan adds 30 more apartment units and an additional story to the building proposed for the cornerstone piece of the project.

Gorman & Co. is proposing to create housing for grandparents raising grandchildren and other kinship situations on a grassy, vacant lot as the next phase of the Union Corners redevelopment on the East Side. The current phase of housing, right, is nearing completion.

Pallets of old bricks, which have been at Union Corners for years after deconstruction of a building, remain as Gorman & Co. presses forward with a multi-phase redevelopment.