A prominent developer is buying the venerable Essen Haus restaurant and Come Back In tavern and plans to demolish the Essen Haus for a project that would transform a prominent Downtown block.

McGrath Property Group has a contract to purchase three buildings in the center of the 500 block of East Wilson Street, a large parking lot behind them and four duplexes from 110 to 118 S. Blair St. for housing and commercial redevelopment. For now, plans call for closing the Essen Haus and Come Back In eventually, although the building holding the latter would be preserved.

The developer isn’t buying the landmark Hotel Ruby Marie and its Up North Bar at the corner of East Wilson and South Blair streets or the tiny vacant lots at 502-504 E. Wilson St. where the former O’Cayz Corral bar stood before it was destroyed by fire in 2001.

In a preliminary concept, McGrath would demolish the Essen Haus building, preserve and renovate the Come Back In building and a small building at 518 E. Wilson St., and raze the four duplexes for a six-story, 340,800-square-foot structure. The new building would have three levels of parking with 343 parking spaces, four commercial spaces, and four floors of housing with 230 to 250 units.

The structure would have a shared lobby where the Essen Haus is now located on East Wilson Street, flanked by commercial space in the preserved Come Back In building on one side and small building on the other. There would also be an entrance on South Blair Street with commercial space on either side.

The Essen Haus and Come Back In are filled with countless items of memorabilia — including the famous hanging beer steins at the German establishment — as well as brickwork and tin ceilings. McGrath said there are no plans to include the establishments in the redevelopment but said he would be open to discussing it.

Robert Worm, who has owned the buildings and the popular establishments, but not the vacant lot, since 1983, confirmed an accepted offer to purchase but said he hasn’t seen McGrath’s plans.

The landmark building at the corner of East Wilson and South Blair streets, built in 1875, was renovated and reopened in September 2000 as the Hotel Ruby Marie — named after Worm’s mother — with 15 rooms and featuring the Lakeview Bakery and Deli and Germania Collectibles. The Up North Bar with its northern Wisconsin decor is also part of that structure. Some speculate that Worm might incorporate the Essen Haus or the Come Back In into the hotel property.

Until he knows more about McGrath’s intentions, the fate of the Hotel Ruby Marie is uncertain, Worm said.

Eli Judge, president of Capitol Neighborhoods, Inc., said the introductory meeting went well and that the First Settlement Neighborhood will be actively engaged in shaping plans for the property. “There are still a lot of big questions to be asked and answered,” he said.

The city’s Downtown Plan allows six stories at the street edges of East Wilson and South Blair streets, stepping down to three stories on South Franklin and East Main streets, Rummel said. Most of the parcel is in the first Settlement Historic District, but the East Wilson Street frontage is in the National Register of Historic Places, not the local historic district, she said.

Any proposed demolitions or new construction will require approval by the city’s Landmarks Commission, and any project would also be reviewed by the Plan and Urban Design commissions, she said. If McGrath seeks to rezone the four houses on South Blair Street, or to exceed height limits, the proposal will also go to the City Council, she said.

“It’s complicated,” Rummel said. “There are a lot of things to figure out. There is potential. There are concerns.”

Bert Stitt, a longtime First Settlement resident and former CNI president, said neighbors are generally relieved something’s going to be done with the Essen Haus property but that some residents may object to demolishing the houses.

The pending loss of the businesses, however, was stinging news for the seven or eight regulars at the Come Back In Monday afternoon (they gather at the bar because their usual haunt, the Essen Haus, isn’t open on Mondays).

Some, who have been going to the Essen Haus since the 1980s and 1990s, said it’s the only place in Madison to find a good German lager. The Essen Haus is also a bar where an older crowd can feel comfortable, they said.

“This is the kind of group that keeps a business open,” said 72-year-old Madison resident and longtime Essen Haus regular Marv Kontney, adding that it might be difficult to find someplace else to meet on weekday afternoons.

Sitting at the end of the Come Back In bar, Michael Toner, a Fitchburg resident and longtime Essen Haus customer, said many of the regulars have even taken trips to Europe together.

“We don’t want to see it change,” he said. “The regulars, they’re like family … It’s a very unique group of people.”

McGrath said he wants to work closely with the neighborhood and hopes to break ground in the fall and open the project in the spring of 2021.

The venture is at least the third attempt to redevelop the roughly two-acre property.

In 2016, Worm and a partner shared preliminary concepts that would have demolished the Essen Haus and Come Back In buildings and razed the four duplexes, but preserved the Hotel Ruby Marie and Up North Bar. The project would have re-established the bars in a redevelopment that could have included a new hotel, housing, commercial space and a parking structure. The concepts, however, were never pursued.

At the time, Worm said the existing buildings were not energy efficient, had old pipes and some electrical problems. The second floor above the Essen Haus is unusable, and five efficiency apartments above the Come Back In need renovation, he said. The four duplexes have no historic value, and the 120-space surface parking lot is an inefficient use of Downtown space, he said.

In 2004, developers were seeking to buy the land from Worm and offered a 16-story mixed-use project that was withdrawn amid protests from residents and city officials. A scaled-back, eight-story redevelopment with condominiums, retail space and parking fell through in 2005.

The project would rehouse the iconic restaurant and its Come Back Inn, preserve Hotel Ruby Marie and and likely add a hotel, housing and commercial space.

The "hairball" intersection in Downtown Madison should be a little less hairy to navigate later this year.

Developer Curt Brink hired a consultant to complete the review on how the project's glass would affect the area, including Breese Stevens Field.

The developer would still raze Madison's Essen Haus restaurant and a small adjacent commercial building. But four houses on Blair Street would be spared.

High-rise glass office tower approved for Madison's Near East Side

The new development will feature office spaces, a parking structure, a green roof and possibly a restaurant or bank.

To move forward, McGrath Property Group needs Landmarks Commission approvals for a land combination and construction of a new principal structure in a historic district.

McGrath Property Group has dropped plans to buy the Essen Haus, the Come Back In and another building on the 500 block of East Wilson Street, a large parking lot behind them, and four houses from 110 to 120 S. Blair St. for a mixed-use project. 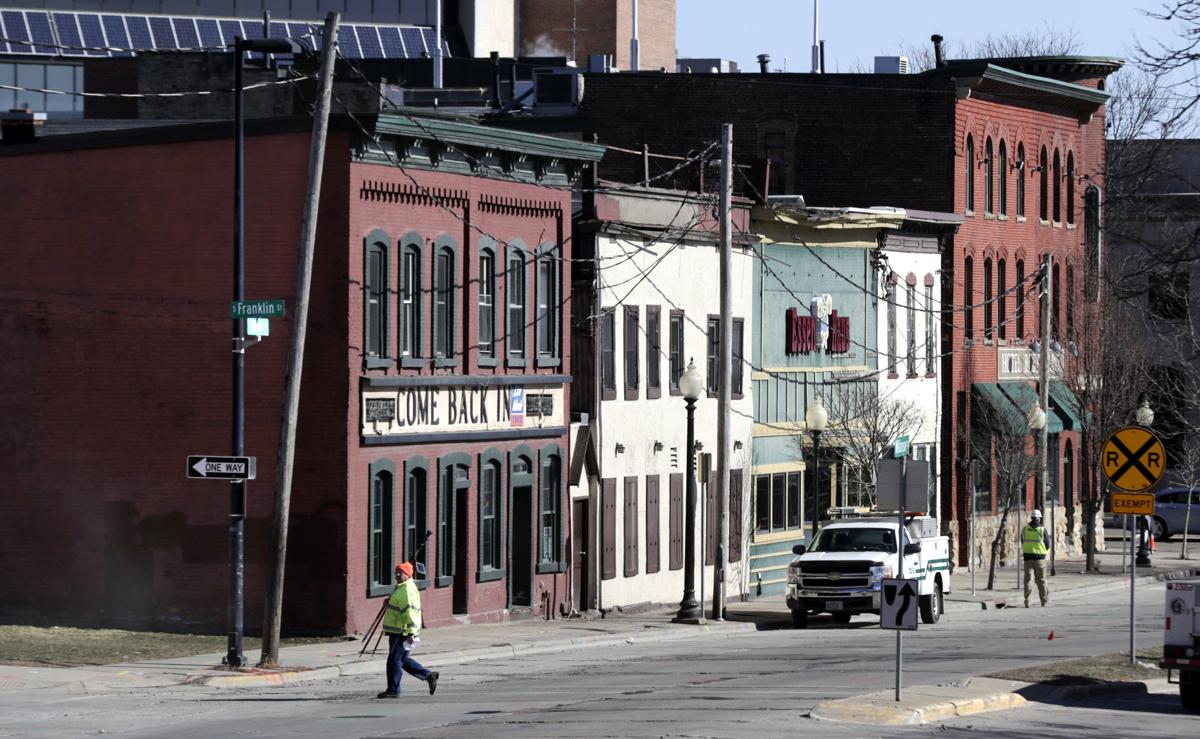 McGrath Property Group is buying properties that hold Madison’s renowned German restaurant Essen Haus, the green facade above, and the Come Back In, at left, for a housing and commercial redevelopment. 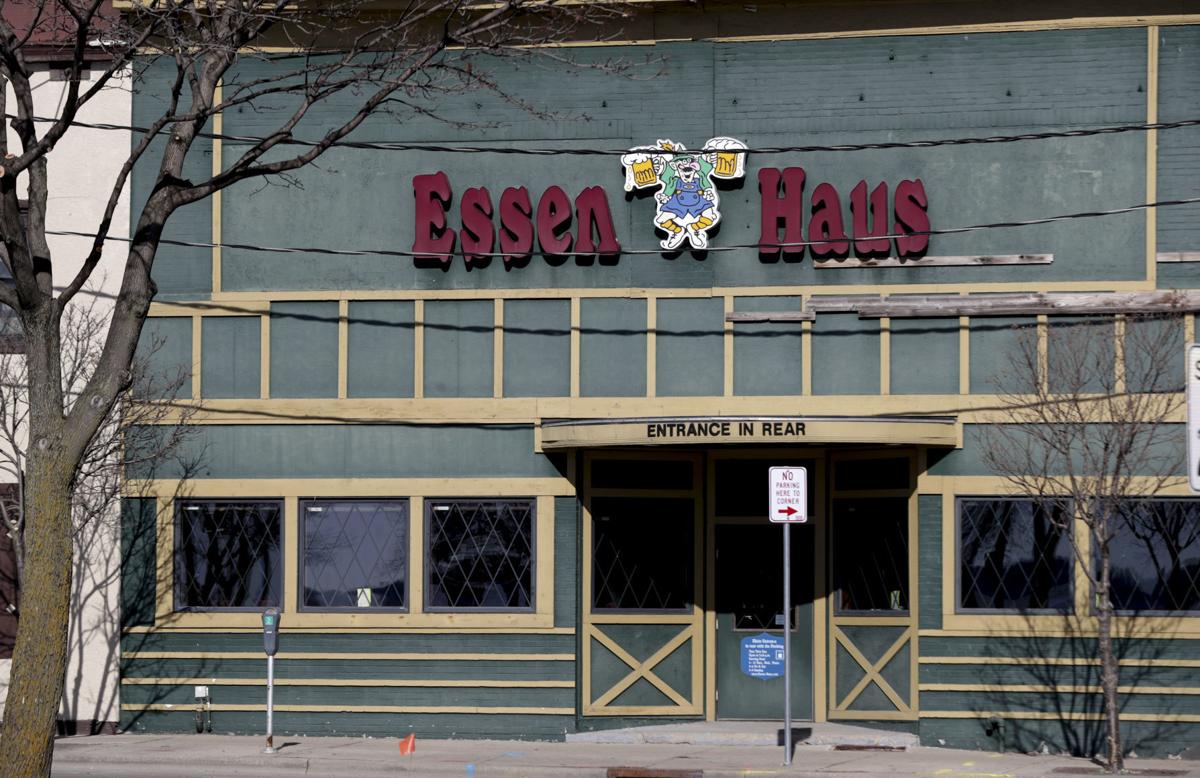 Essen Haus, 514 E. Wilson St., 608-255-4674. The German-style restaurant has been offering a Thanksgiving meal for 34 years. Diners carve the turkey tableside themselves and can bring the leftovers home. Unlimited sides include stuffing, mashed potatoes and gravy, yams, cranberry sauce, mixed vegetables and dinner rolls. There are assorted pies for dessert, and coffee, tea, milk and soda are included. 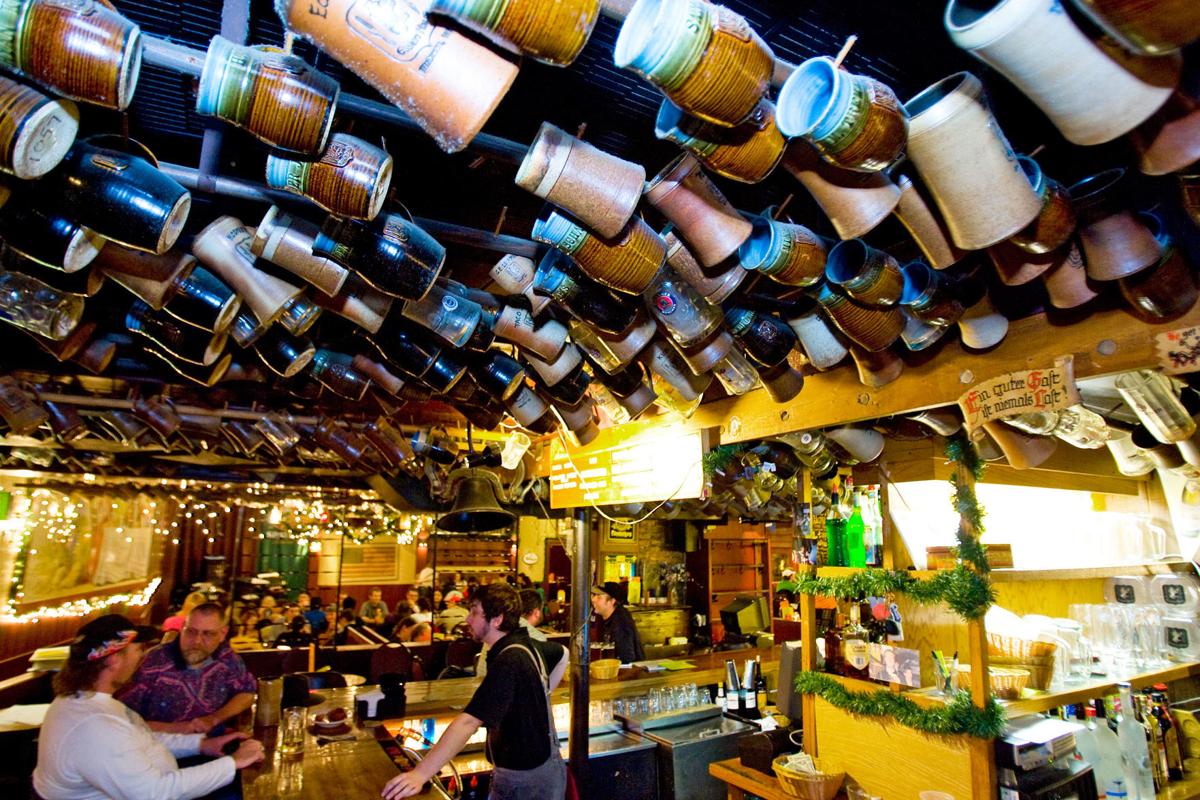 Hundreds of beer steins belonging to members of the "Stein Club" line the ceiling at the Essen Haus. 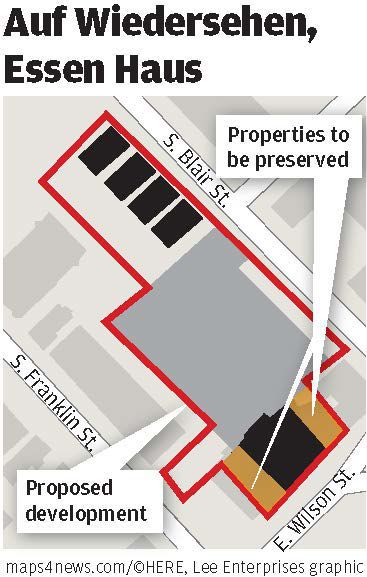