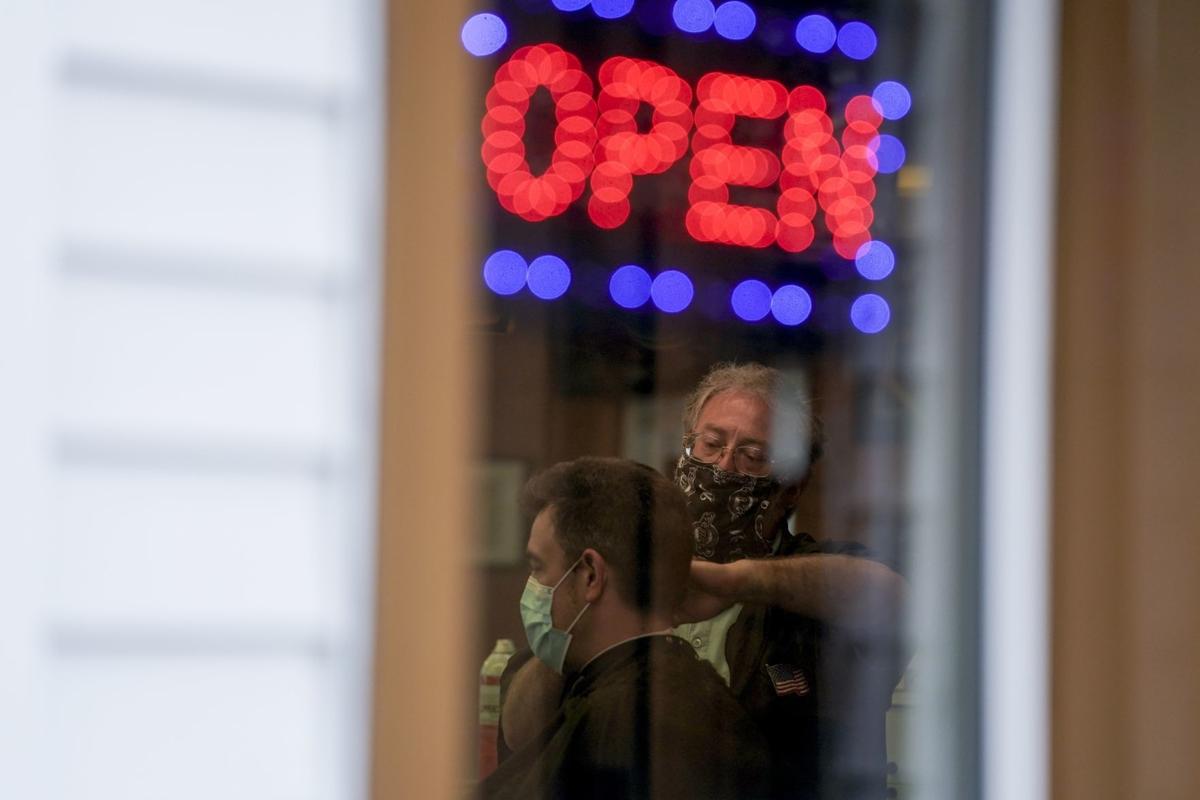 Owner Paul Furrer cuts the hair of Jeff Jones at Rich's Barber Shop in Waukesha on Thursday. Wisconsin has emerged as the hot bed of partisan fighting over the COVID-19 coronavirus, including how to slow its spread, restart the seized economy, vote amid a pandemic and judge President Donald Trump's leadership. 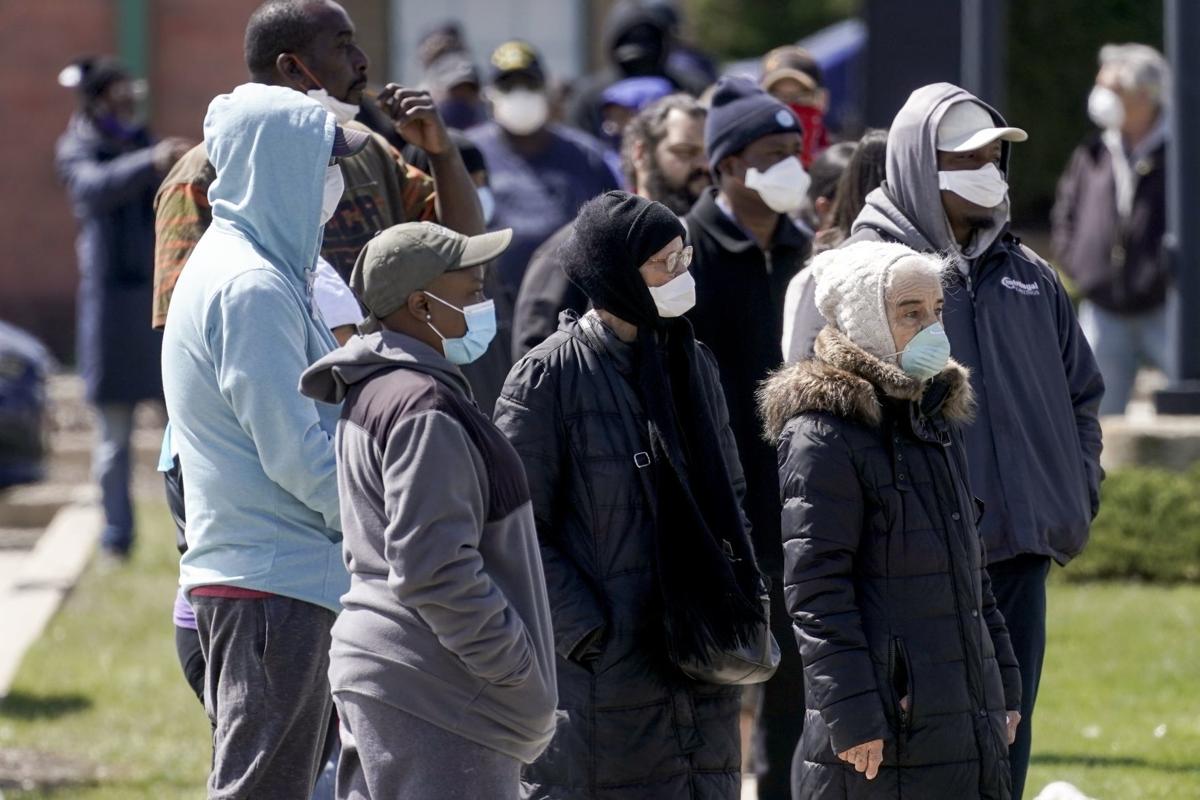 People line up for a COVID-19 test in a parking lot in Milwaukee last week.

Now, six months before a presidential election, the state is on fire again. With a divided state government and a polarized electorate, Wisconsin has emerged as a hotbed of partisan fighting over the COVID-19 coronavirus, including how to slow its spread, restart the economy, vote during a pandemic and judge Trump’s leadership.

In recent weeks, every political twist has been dissected by the parties, political scientists and the press, all searching for insight into which way the swing state might be swinging in the virus era.

Democrats had the most significant recent win, a contested statewide Supreme Court race. It gave them a claim on momentum after making gains in the 2018 midterm elections. But Republicans last week won a special election for Congress, albeit in a GOP stronghold, and successfully had the governor’s stay-at-home order tossed out by a conservative-dominated state Supreme Court.

But no one is making predictions about Wisconsin in November, other than to note that the latest fight over the fallout from the coronavirus may be the most important of them all.

“The jury’s still out,” said former Gov. Scott Walker, perhaps the figure most closely associated with Wisconsin’s political turbulence. The Republican had previously said the economy favored Trump carrying the state. On Friday, he said the November presidential election will be a referendum on Trump’s handling of the pandemic.

Taking their cues from Trump, who has called on states to “liberate” residents from stay-at-home orders and get back to normal, state Republican lawmakers challenged Democratic Gov. Tony Evers’ order in court. Similar maneuvers have been tried in Michigan and Pennsylvania, which also backed Trump in 2016 and handed him the White House.

But only in Wisconsin have Republicans gotten what they wanted, suddenly taking ownership of the state’s coronavirus response and, with it, new political risk. While some Wisconsinites rushed out to bars to celebrate the court’s ruling, many in the state were confused about the new patchwork of restrictions. Meanwhile, a solid majority of Wisconsin residents have said they support Evers’ handling of the crisis, according to a new Marquette Law School poll.

Democrats were quick to cast the issue as much larger than the previous partisan feuds.

“By November, a significant fraction of Wisconsinites might be close to someone who has been hospitalized or even died because of coronavirus,” Wisconsin Democratic Party Chairman Ben Wikler said. “And those are, unlike passing news cycles, the things that can create scars that change how people view politics in their own lives.”

As in other states, the virus has moved beyond Wisconsin’s big Democratic cities. Brown County, home of Green Bay and a number of meat processing plants, has become Wisconsin’s fastest-growing COVID-19 hot spot.

In 2016, Trump easily carried the county. But in last month’s election, Democrats’ choice for the state Supreme Court, Jill Karofsky, won Brown County, part of her surprisingly strong showing in an election plagued by long lines at polling places and widespread worries over whether it was safe to be voting at all.

Evers tried at the last minute to postpone the election, but Republicans refused. Again, Wisconsin’s drama was projected on the national stage — and mined for lessons about organizing, mail-in voting and ballot access.

“Republicans in my district were begging us not to hold an in-person election,” said state Rep. Robyn Vining, D-Wauwatosa, whose district spans western Milwaukee County and GOP-leaning suburbs. “People who said they had voted Republican their entire lives were furious.”

Whether Republicans will take out any frustrations on Trump is far from clear. The Marquette poll last week found Trump has a 47% approval rate in Wisconsin, virtually unchanged from March. The poll also registered the impact of the state’s decade of political battles — an intense polarization.

“There’s not much of a middle in Wisconsin, at least as far as Donald Trump is concerned,” said John Johnson, a research fellow from Marquette Law School.

The state was a hotbed of tea party opposition to Barack Obama’s administration in 2010, sentiment that helped Walker win office and move to cut public-sector unions’ bargaining rights. The effort ignited mass Capitol protests in Madison and prompted a bitter recall election a year later. Walker beat it back and went on to win reelection in 2014.

His tenure hit at the heart of Wisconsin’s once-progressive tradition. In addition to his labor legislation, he prevailed over a challenge to Wisconsin’s legislative redistricting — leaving the state with districts heavily gerrymandered to favor his party.

Since Trump’s narrow 2016 victory in Wisconsin — the first by a Republican presidential candidate since 1984 — the state has become home to a permanent campaign. Democrats began a year-round organizing initiative that led to a comeback with Evers’ narrow defeat of Walker in 2018.

Republicans, too, have invested in organizing in the state, particularly in hunting for new voters in the rural counties where Trump made strong gains over past Republican candidates.

The Trump campaign said its staff of 60 turned its attention last week to a special election for a congressional seat in northern Wisconsin. They made 2.4 million get-out-the-vote calls in the district — roughly half of all the voter contacts they’ve made this election cycle in the state.

Wisconsin cities and counties are embarking on a hodge-podge of strategies for containing the COVID-19 pandemic ranging from continuing the state order at the local level to opening up without restrictions.

In the absence of statewide regulations on business activity or gatherings, a handful of counties, including Dane, have enacted local orders that essentially mirror Evers' "safer at home" rule.

Gov. Tony Evers and legislative Republicans will need to work quickly to come up with a replacement plan.

Waterlogged southern Wisconsin will get a chance to dry out, with rising temperatures

East-central and southeastern Wisconsin were hit hardest by heavy rain starting Sunday, and several rivers will remain above flood stage through mid-week, according to forecasters.

State agents are investigating a fatal shooting by sheriff's deputies in Oconto County.

Newly minted U.S. Rep. Tom Tiffany said he wants to "advance the cause of freedom and liberty."

Owner Paul Furrer cuts the hair of Jeff Jones at Rich's Barber Shop in Waukesha on Thursday. Wisconsin has emerged as the hot bed of partisan fighting over the COVID-19 coronavirus, including how to slow its spread, restart the seized economy, vote amid a pandemic and judge President Donald Trump's leadership.

People line up for a COVID-19 test in a parking lot in Milwaukee last week.