After about a year stuck in committee, a resolution opposing the placement of F-35 jets at Truax Field in Madison is back up for consideration by Dane County, but even if the proposal passes, it’s unlikely to stop or stall the jets’ arrival.

Last April, the U.S. Air Force selected Madison to host the squadron of F-35 fighter jets, which are expected to bring jobs and new construction but also noise and pollution. The $90 million jets will begin arriving in 2023 and replace the current fleet of 1980s-model F-16s at the Wisconsin Air National Guard’s 115th Fighter Wing.

Dane County’s Environment, Agriculture & Natural Resources Committee on Thursday recommended a resolution that would officially oppose the project, delay construction agreements, and direct the county’s legal department to explore strategies for blocking the Air Force’s plans and mitigating the impact.

The Madison City Council adopted a similar proposal standing against the jets in April, but the city has no power to prevent the planes from coming.

Sup. Heidi Wegleitner, the lead sponsor of the county resolution, said she wants to find out whether the county can stop the project, delay it, or at least mitigate the harm from the planes. She said since the county is the landowner, it may have more power than the city.

“That’s what this resolution is about is trying to see what we can do,” Wegleitner said.

Asked why the resolution was being revived now after Madison has already been selected for the jets, Wegleitner said “this project is still a bad idea.”

The county’s environment committee had already approved the resolution in March, but brought it up for a vote again with the hope of helping the proposal gain some traction after it stalled last year when the COVID-19 pandemic put many county meetings on hold. The County Board never took it up for a vote.

The resolution has the same language as last time, except for a few minor changes and a new amendment from Sup. Yogesh Chawla, 6th District, that would put any construction agreements between the National Guard and the county on hold until environmental studies are complete, a plan is developed to fix the PFAS contamination at the site, and that plan has been both funded and started.

Sup. Jeremy Levin, 10th District, the only member of the committee to vote against the proposal, said it was “bizarre” to vote on the resolution a second time. He said other county committees could have taken it up for a vote, but for almost a year, they haven’t.

“I think it tells you where else this is going, and it’s nowhere,” Levin said.

But Chawla said even if committees refuse to consider the resolution, he or another supervisor could pull it out of committee for a full vote by the County Board.

The 37-member board was split on the issue last year. Fourteen board members are sponsors of the resolution.

The measure next heads to the Public Protection & Judiciary Committee, the Airport Commission, Public Works & Transportation Committee and the Executive Committee.

A collection of letters to the editor about the prospect of the 115th Fighter Wing of the Wisconsin Air National Guard operating the new F-35 fighter jets at Truax Field in Madison.

I appreciate State Journal's coverage of the proposal to bring F-35 fighter jets to Truax Field. I am a nurse serving a neighborhood adjacent …

Letter to the editor: "It's about Truax Field, the 115th Fighter Wing and protecting of all the citizens of the United States and our neighbors to the north and south. Strategically, we are in an optimum location to do this."

Jets are a poor fit for Madison -- Paul Reckwerdt

Imagine our government putting a factory next to your house that emits randomly up to 121 decibels of window rattling noise, lowers your prope…

To all of the people who live near the airport and are upset about the F-35s -- if you bought you home after 1939, you knew the airport was there.

Letter to the editor: Forget the noise (although it is torture for those of us with tinnitus). An inconceivable amount of our money -- more than a trillion of our tax dollars -- is being used to build machines whose sole purpose is to kill and destroy.

Welcome the F-35 into our community -- Walter Fitzgerald

Letter to the editor: "I care about a clean environment, but I care about people and jobs more."

Those affected by F-35 will need help -- Mike Shivers

I read Pat Richter's opinion piece, "Just another weekend for the 115th Fighter Wing," in the Aug. 26 State Journal, and it was very good. How…

F-35s do not belong in an urban area -- Sandra Abitz

Is it wise to render entire neighborhoods uninhabitable? Is it wise to lower the quality of life with noise-related stress and health risks? I…

For the last 40 years I've had a quote from President Dwight D. Eisenhower on my refrigerator door. It is from his "Cross of Iron" farewell me…

Letter to the editor: "The plan to bring F-35 fighter jets to Madison's Truax Field raises many concerns."

Urban area a poor fit for air base -- Lisa Luedtke

While I understand why some residents may welcome F-35s at Truax Field, I question whether it makes sense to intensify aircraft activity in an…

Madison is lucky to have fighter wing -- Otto Gebhardt

I would like to show my support for the 115th Fighter Wing and for them being selected for the F-35 mission. The people who work there are goo…

If you support our armed forces like I do, please consider showing your support for the F-35 expansion coming to Madison. A small yet vocal co…

Region should be proud of 115th Fighter Wing -- Dave McLean

I have lived within a few minutes of Truax Field in Madison for over 35 years. Our home is in the flight path of the planes and jets flying in…

The Air Force has released its draft environmental impact statement for locating a squadron of F-35A fighter jets at two locations.

In 2016, President Obama visited Hiroshima and called “for a world without nuclear weapons.” We can contemplate this calling during the August…

People in our East Side neighborhoods are concerned about the possible use of Truax Field as headquarters for the F-35 fighter jets.

Putting the F-35 fighters in Madison makes us more at risk of counter-strike targeting, not safer.

Truax Field is one of five locations under consideration to host two squadrons of F-35 jets, which would result in new jobs and economic development, as well as additional noise and pollution for East Side neighborhoods. 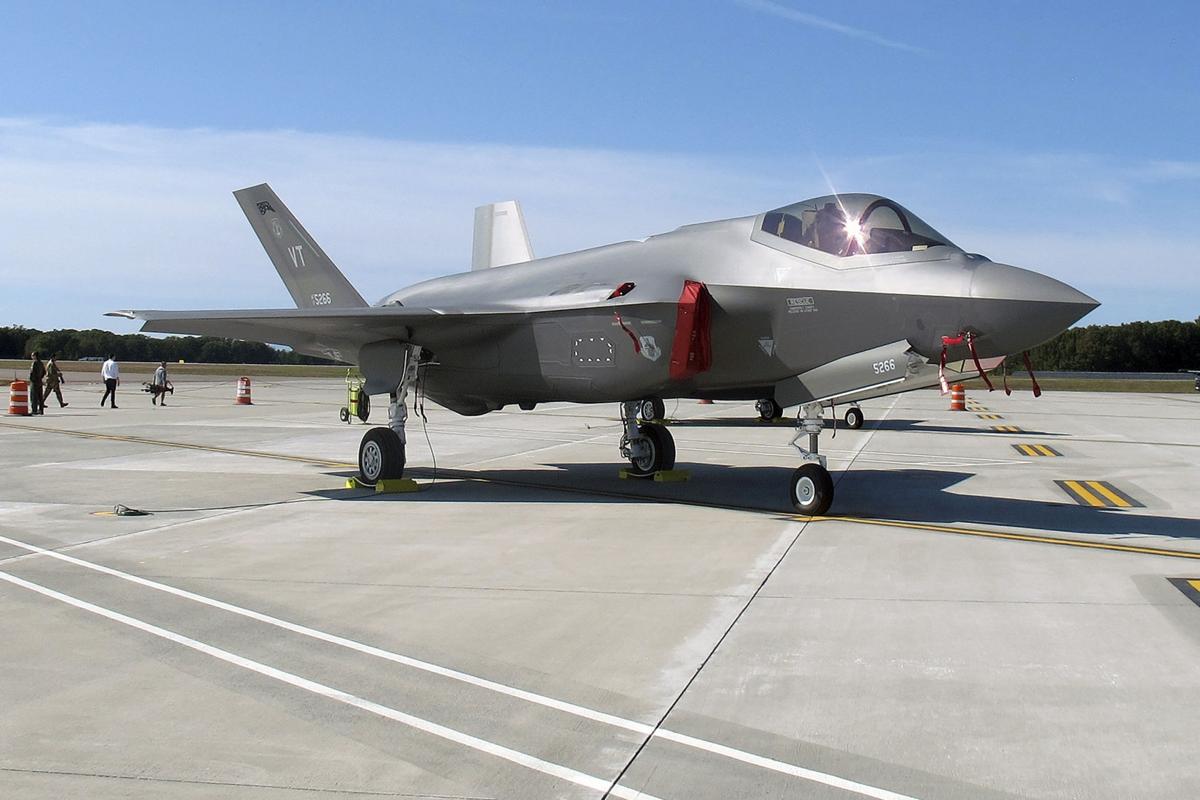 The U.S. Air Force has selected Madison to host a squadron of F-35 fighter jets, which are expected to bring jobs and new construction but also noise and pollution. 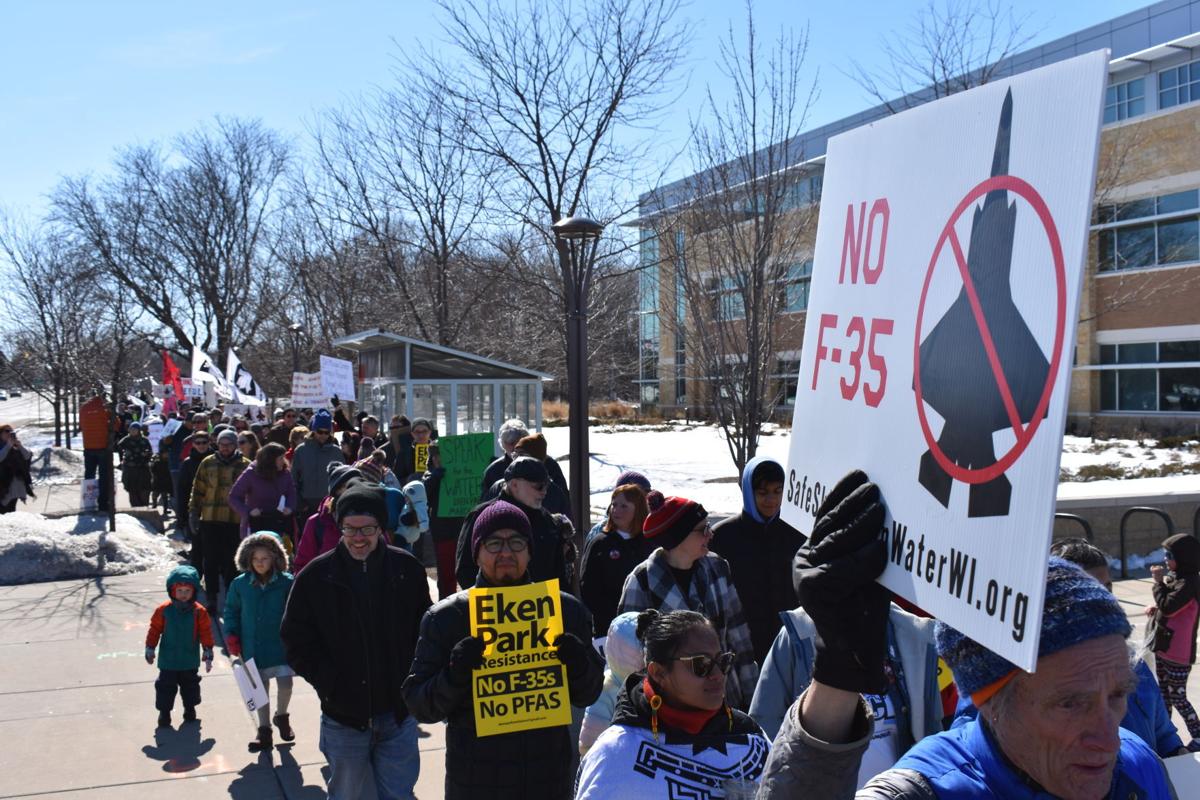 Protesters march along Wright Street in February 2020 to protest the basing of F-35 jets in Madison. The fighter jets have created division in the community over the last several years, with those in support saying the placement will bring jobs and economic development, while those opposed decry the pollution, noise and disproportionate impact on people of color and low-income residents.