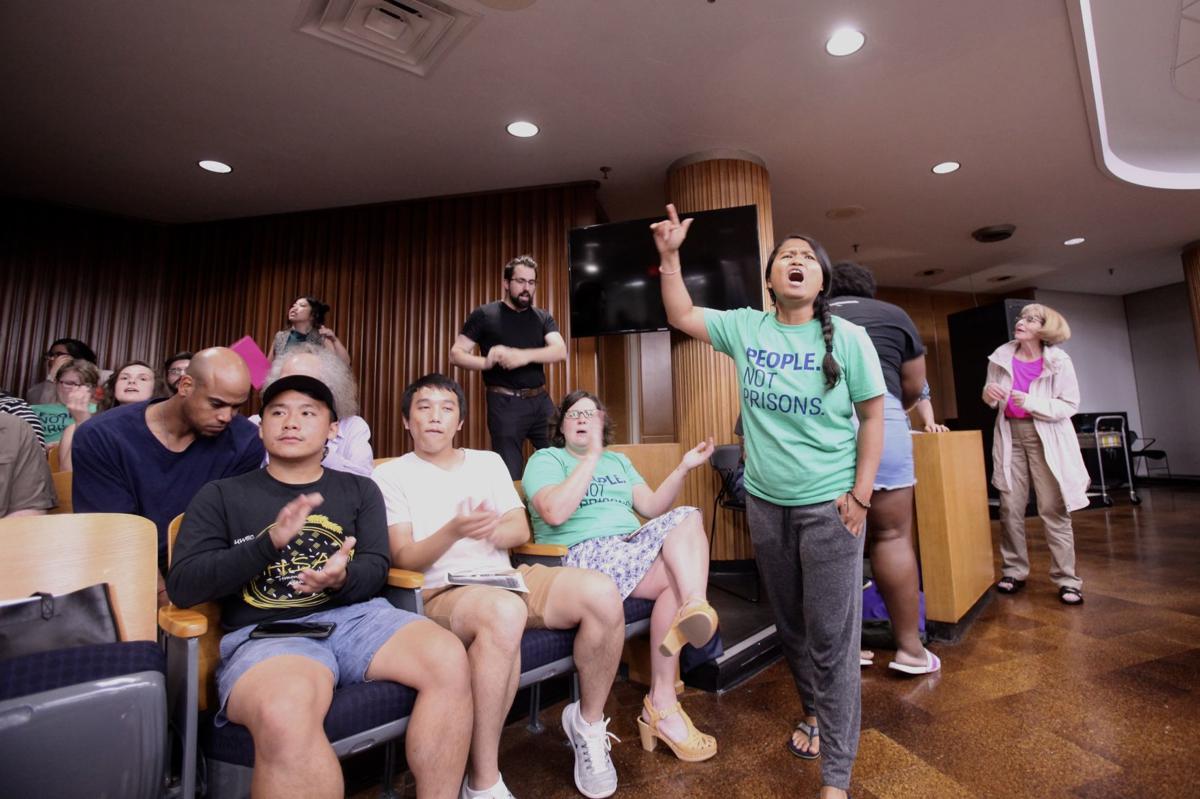 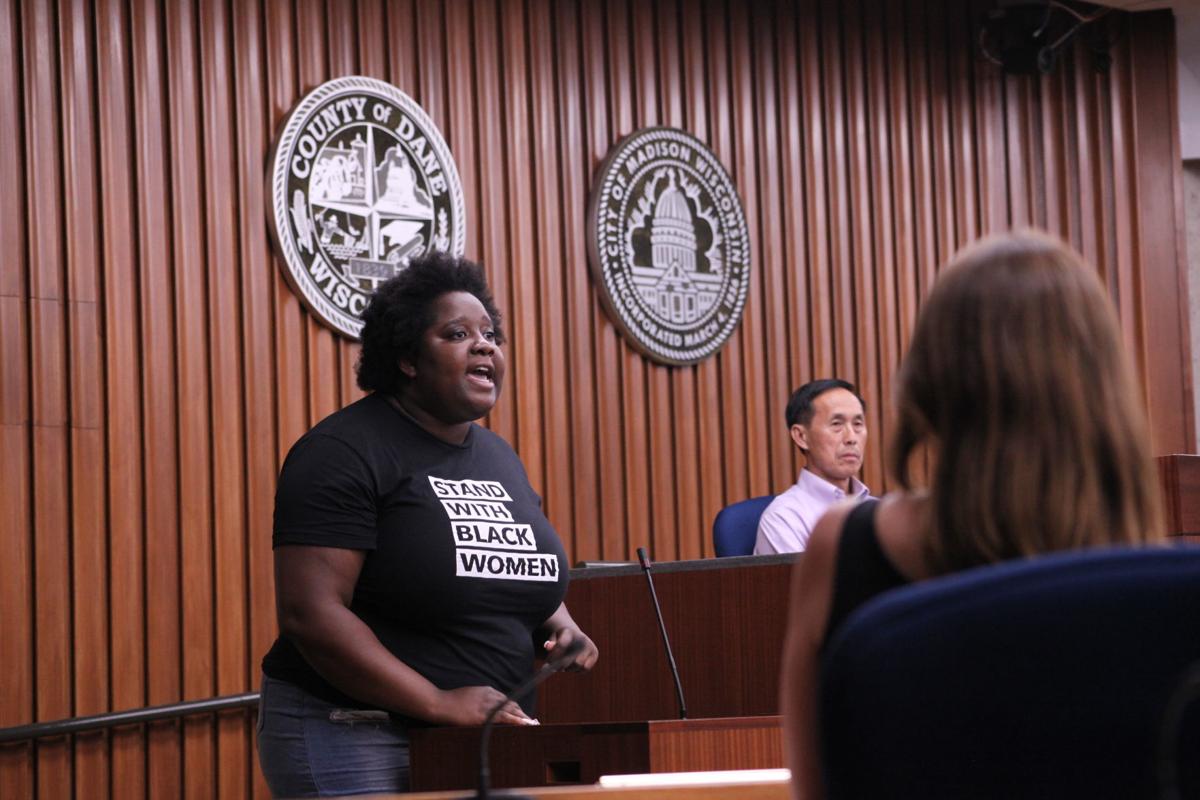 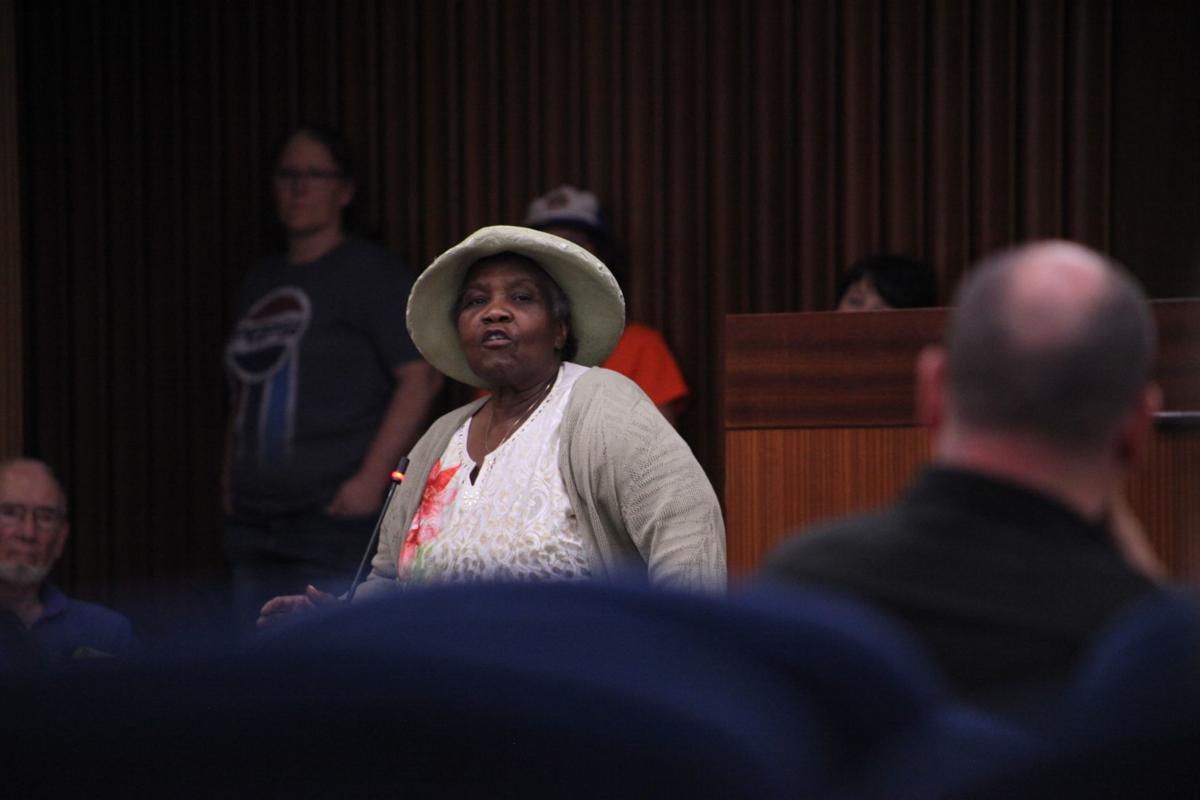 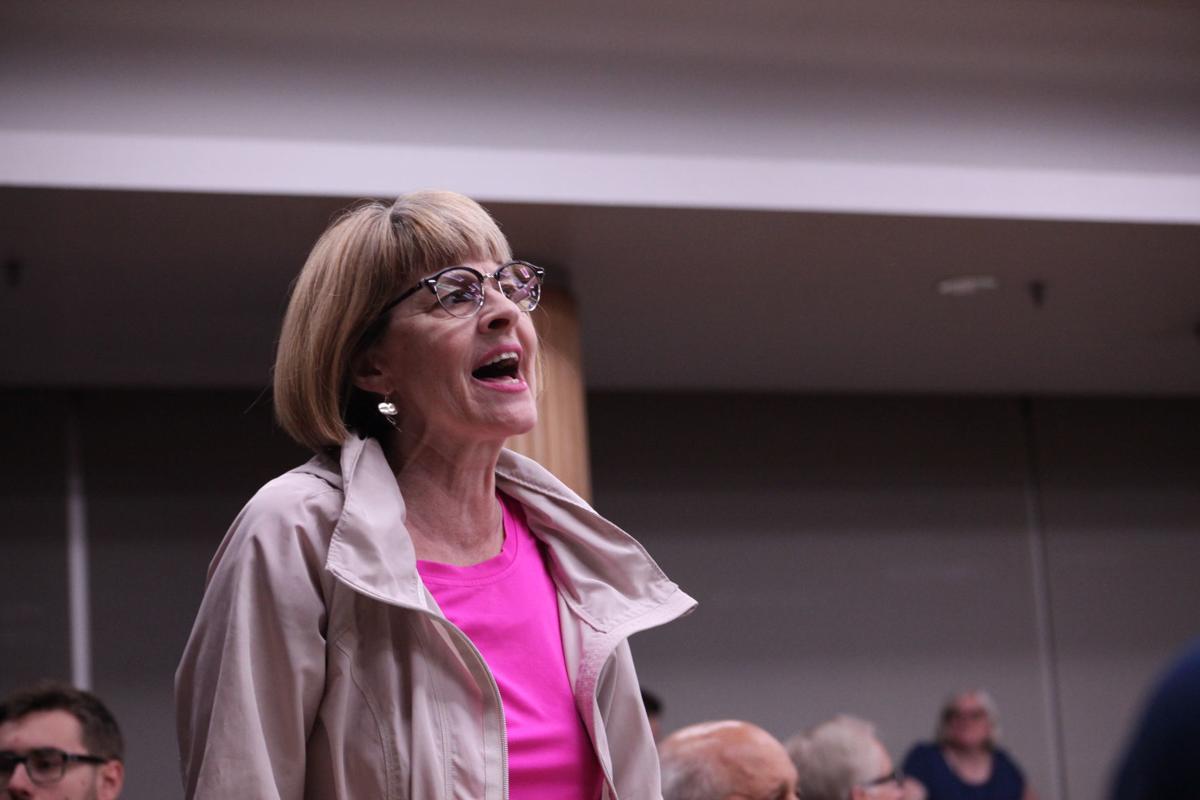 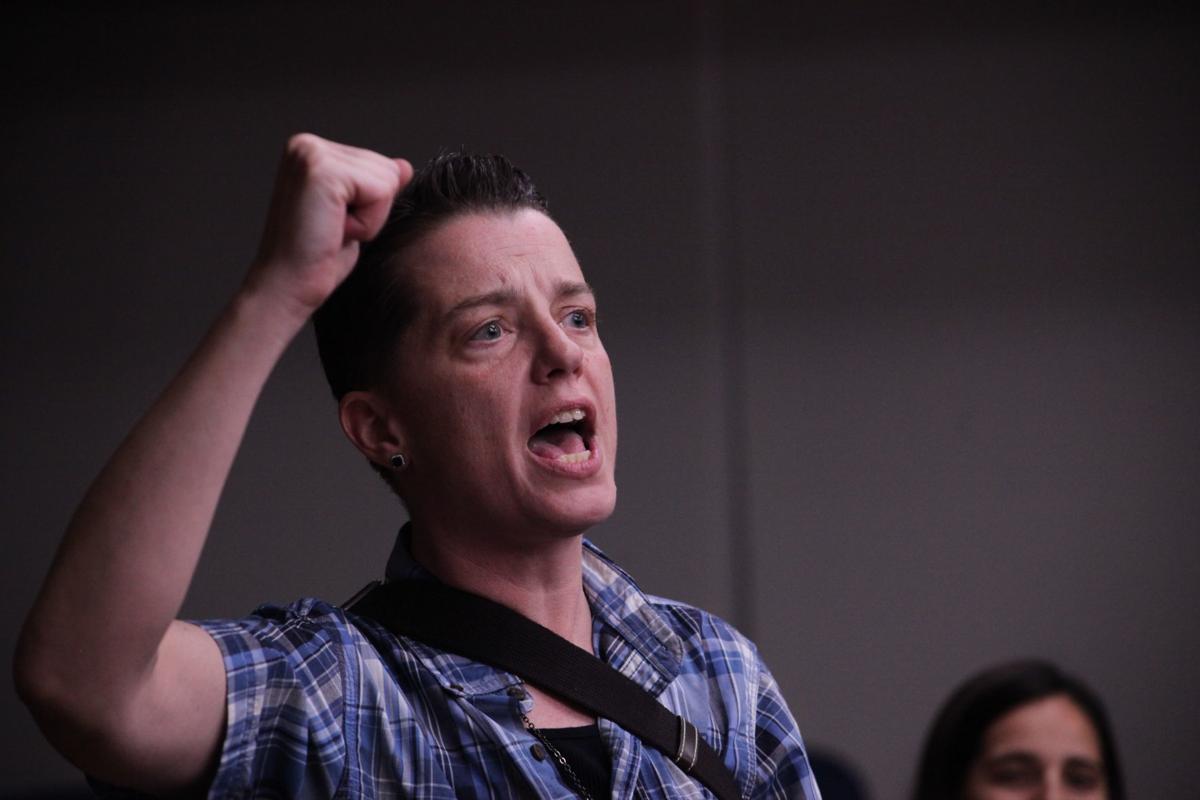 Protesters took over a Dane County Board meeting Thursday before supervisors approved a $148 million plan to update and consolidate the county’s jails, with demonstrators chanting and yelling “our meeting,” “shut them down” and “build people, not jails.”

With shouts of "shame" from the audience, supervisors voted 26-4 early Friday, with three board members absent, to approve the plan, which costs $72 million more than they had initially approved and includes building an eight-story tower on the parking lot behind the Downtown Public Safety Building jail and closing two jail facilities that are outdated.

Dane County Board meeting is at a standstill right now as anti-jail protesters have taken over the meeting. pic.twitter.com/O2J8tAfj4i

Prior to the vote, the meeting came to a standstill for 15 minutes after demonstrators yelled over Dane County District Attorney Ismael Ozanne, telling him to “sit down.”

Those opposed to the jail renovation accused supervisors of having their minds made up to approve the plans before Thursday’s meeting.

“Y’all are actually hypocrites if you decide to build a new jail,” said Mahnker Dahnweih, a member of Freedom Inc. “You’re spending this money on locking black folks up.”

But Linda Hoskins, who said she volunteers to help inmates in the jail and was in favor of the renovation plan, said the county can support both community services to reduce incarceration and an update to the jail. She said the new plan is about caring for the people in the jail.

Hoskins said the county needs a facility that is "not a dungeon."

But Cassandra Steiner, of Madison, was skeptical that the county would actually commit to reinvesting in communities and diverting people from jail.

"We know that when jails are built, cops find a way to fill those jails," Steiner said.

The meeting was interrupted several times by outbursts from local anti-incarceration activists opposed to the project, with many arguing that the funds should be put toward services to help keep people out of jail.

Audience members swore and yelled at county supervisors, talked over supporters of the project and refused to leave the floor of the meeting room when staff told them they were not allowed to sit there.

Before being interrupted by protesters, Ozanne said he does not support increasing the number of people in jail, but the updates to the county’s jail facilities are necessary to “create a humane facility.”

The new tower would have mental health and medical beds, would greatly reduce the use of solitary confinement and would be a safer environment for maximum security inmates who are currently housed at the City-County Building. The new plan would also reduce the total number of jail beds.

The preferred plan is the cheapest of four options that had been proposed after structural roadblocks halted the original, far less expensive, plan to consolidate the county’s jails. The board had originally approved adding four floors atop the Public Safety Building at a price tag of $76 million, but contractors said the building could not structurally carry the extra weight of those floors.

The three other options were:

More than 20 people spoke against the jail renovations, with more than 60 more registering in opposition to the plan. Three spoke in favor, with about another 15 registering in support.

There was also vocal opposition for plans to renovate and expand the juvenile detention center on the second floor of the City-County Building. More than 20 people either spoke or registered in opposition of the measure.

On a voice vote, the county board approved the $264,000 contract with an architecture firm to start plans for the remodel of the juvenile detention center. The county hopes to be one of several smaller youth prisons following the state-ordered closure of the two current youth prisons, after years of misconduct and abuse allegations there.

Disappointed with the supervisor's support of the jail project, Chawla called on the county board to "do better" for the community and be diligent in reducing the jail population and eliminating racial disparities.

"Tonight we’ll be voting on constructing bricks and buildings, but over the next five years we will determine how those facilities will be used," Chawla said. "I hope we pursue these decarceration alternatives with the same vigor and velocity that we are pursuing the south tower jail project."

The project is slated to be completed in mid-2024.

Sup. Paul Rusk said he supports the addition because it will close the City-County Building jail. That facility opened in the 1950s and has been described by Sheriff Dave Mahoney as dangerous and inhumane.

Mahoney and other officials presented the options as a way to create a more ethical jail that would close what Mahoney called the outdated, dangerous and inhumane cell blocks on the top floors of the City-County Building

County officials could ask consultants to consider three new options that would range from building on county land to renovating current jail space.

Inmates in four Dane County Jail cell blocks were held in their cells for about five hours Monday because of a power failure, but nobody was hurt in the incident.

“The design of such a space should take into account the desire to be inclusive," the resolution states.

The county planned to build four floors atop the Public Safety Building so it could close the Ferris Huber Center and the outdated maximum security units on the top floors of the City-County Building.

A Dane County Jail inmate couldn't get out of her cell Tuesday morning after the door malfunctioned, the third such incident in two years at the old jail in the City-County Building.

"In every major modern social movement, locally and globally, asking without causing disruption has been ineffective," one supporter said. "Active disruption, in every single case, was necessary to end violence and shift towards justice."

The report explained that any legal action would fall under breach-of-contract rules with a statute of limitations of six years from the time construction was completed. The Public Safety Building was completed in 1994, making the deadline to file a claim 2000.

Inmates who would have been transferred to the state's prisons will now stay in county jails. Dane County Sheriff Dave Mahoney called the order "very frustrating."

A $148 million plan to update and consolidate Dane County's jails will be delayed several months because the project is coming in even more expensive than expected.

After a $20 million budget overrun caused delays, the Dane County Jail project is now moving forward again because it was brought back under budget. 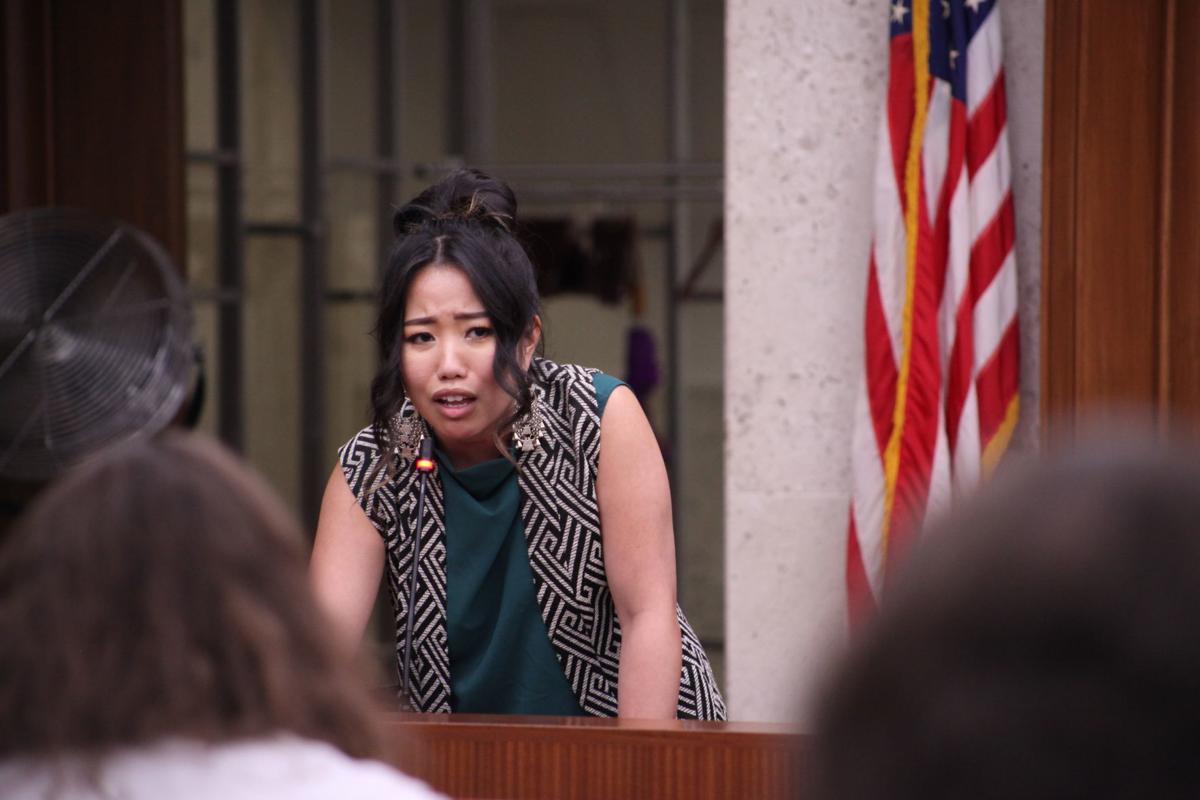 Zon Moua, director of Youth Organizing a Freedom, Inc., speaks in opposition to the plan for expanding the juvenile detention center. "What young people need to be successful is not cages," she says. "Shame on you if you pass this." 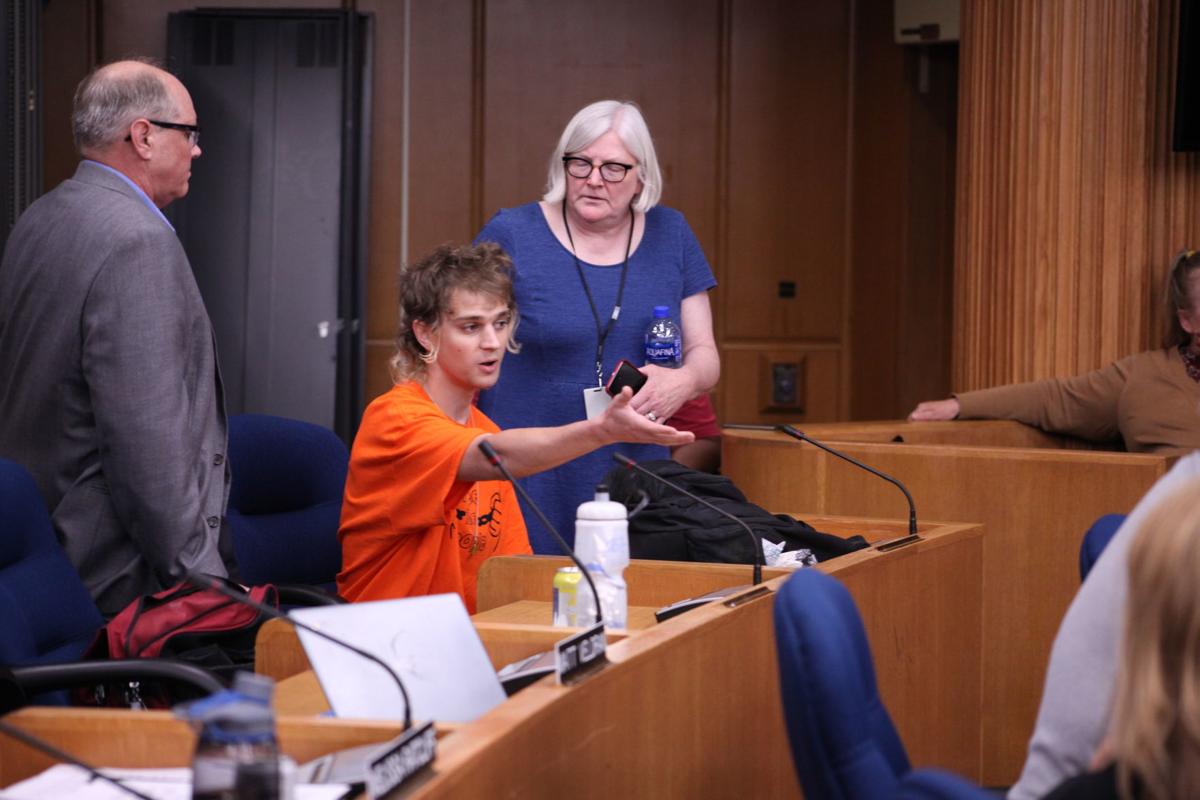 A protester refuses to move after sitting in a chair among board members. 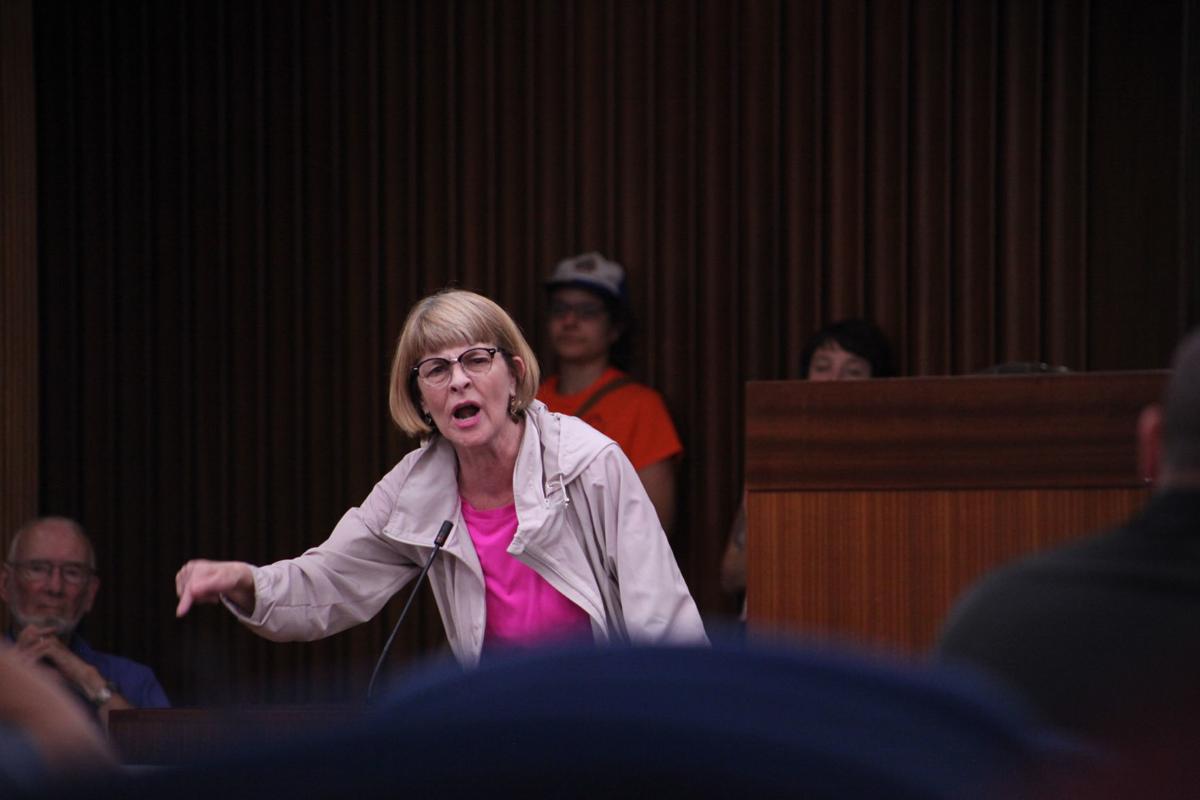 Kim Gasper-Rabuck, who said her 16-year-old black son has a "bulls-eye on his back", yells out in opposition to the Dane County Jail update and consolidation. Gasper-Rabuck spoke well over her allotted time of 5 minutes, continuing to yell and slam her hands on the table after the county board turned off her mic. 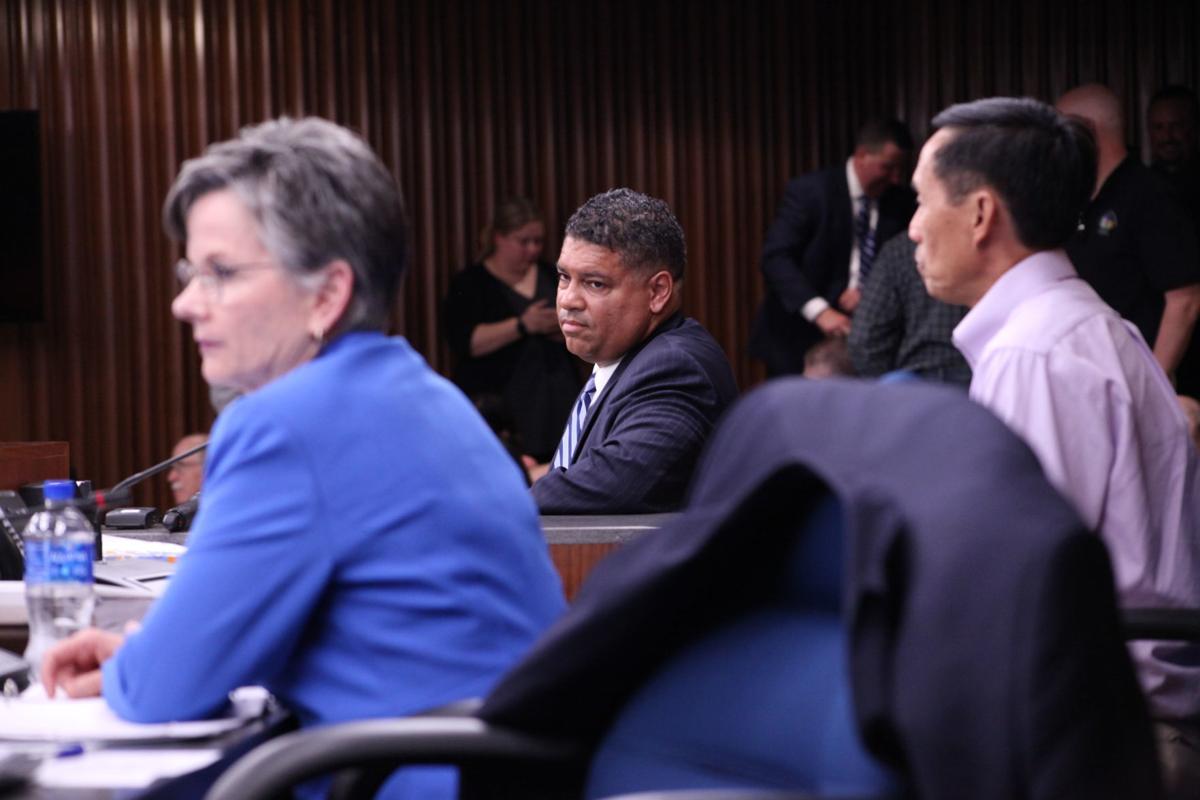 Dane County District Attorney Ismael Ozanne sits in silence as protesters chant, "Whose meeting? Our meeting." Ozanne had registered to speak in support of the remodel, but protesters shouted over him, telling him to, "Sit down." 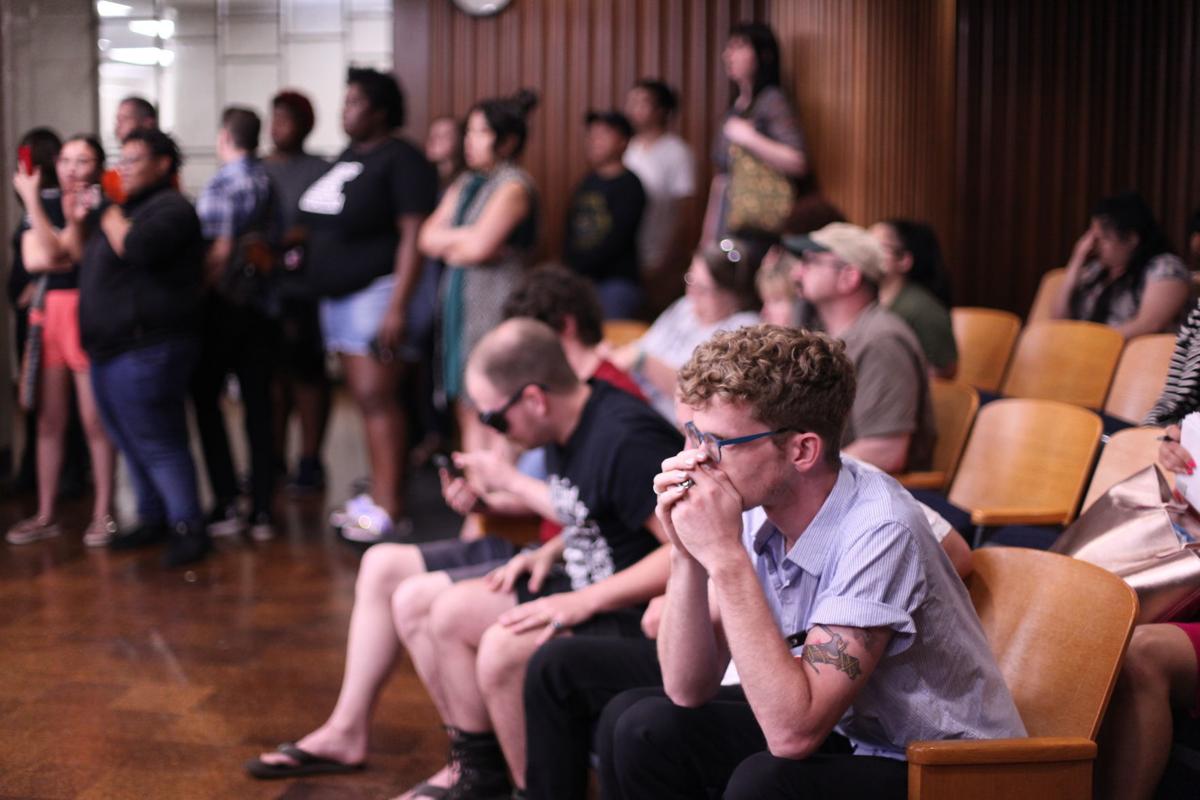 Nick Puetz, who was opposed to the plan to consolidate the jail, reacts after the Dane County Board approves the measure.