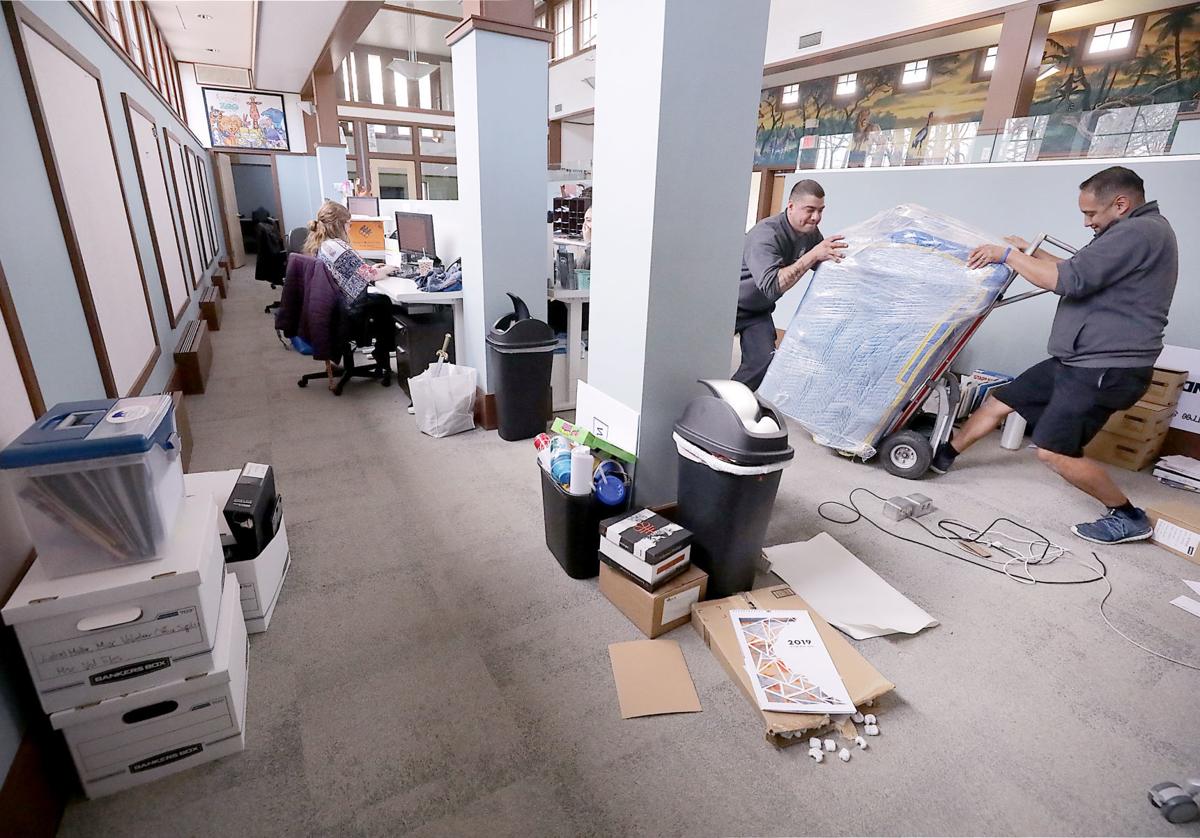 Movers and staff members clear out the offices of the Henry Vilas Zoological Society in the Visitor Center of the Vilas Zoo in Madison late last week. Dane County has ended its partnership with the society. 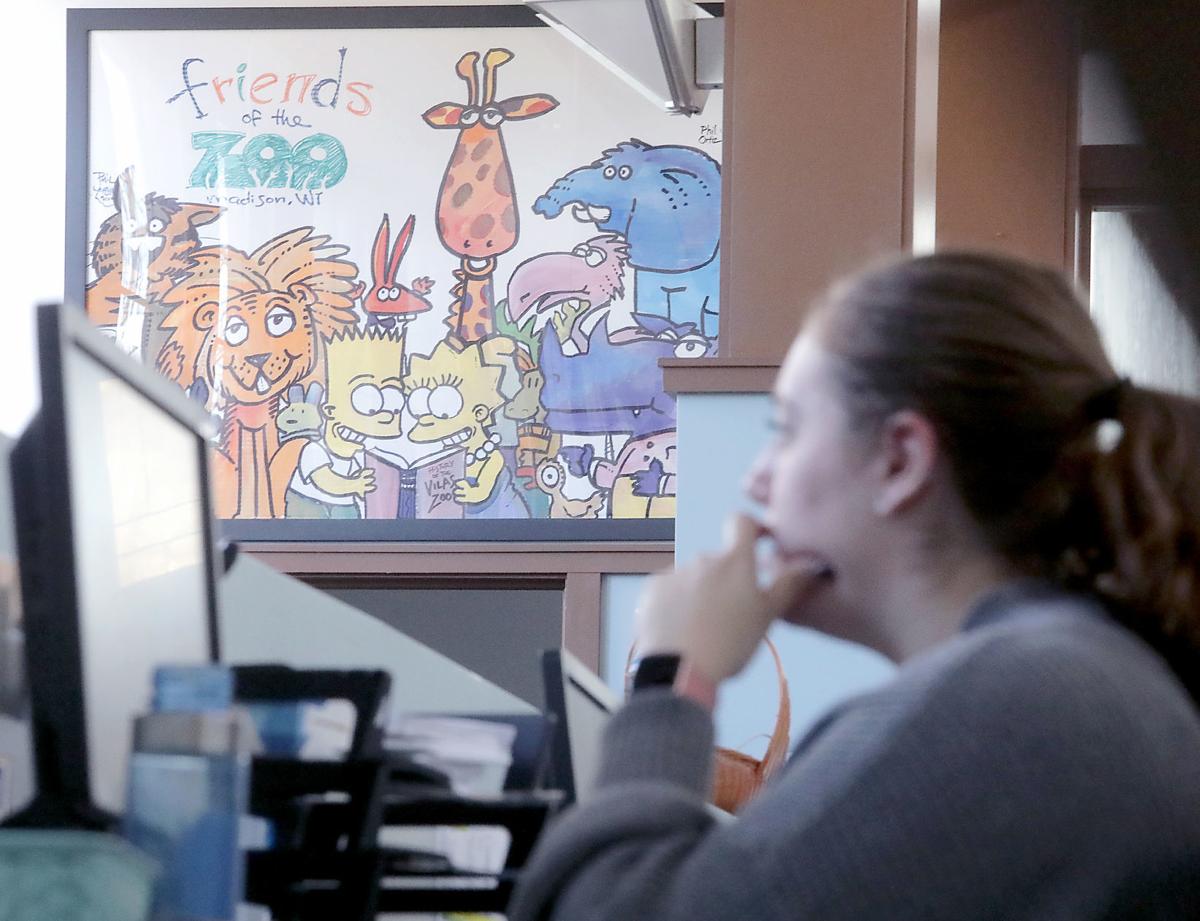 Tressa Steuber, former membership director for the Henry Vilas Zoological Society, works to organize her computer files as part of the society's move-out process from the zoo's Visitor Center. 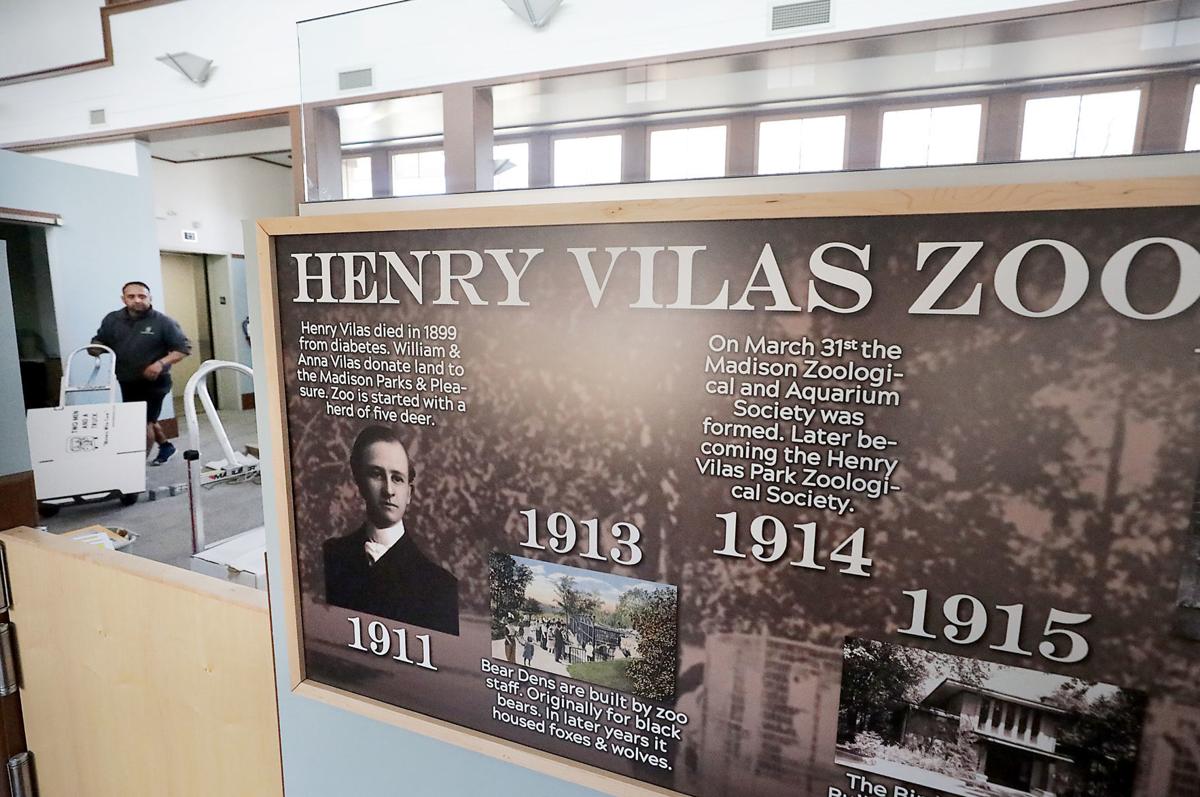 A mural depicting the early days of the Vilas Zoo, including the 1914 establishment of the Henry Vilas Zoological Society, is displayed on a wall of the zoo's Visitor Center.

The messy and very public break-up between the Dane County Executive’s Office and the Henry Vilas Zoological Society ended late last week the same way as many divorces — with one side reluctantly packing up boxes and moving out.

In this case, the society was sent packing by the county, and the split, like many, is peppered with accusations, counter-accusations, hard edges and hurt feelings.

Dane County officials initiated the break-up by not renewing a contract with the society, a 105-year-old organization that has been supporting zoo efforts for many decades through fundraising, concession sales and special events.

The county and the society have been linked since the mid 1980s, when Dane County took over operation of the zoo from the city of Madison.

“It’s unprecedented to shut down an organization that’s been so successful,” said society president Alison Prange. “I think the hardest thing about this is that we’re leaving on the high note of having the best organization we’ve ever had.”

County officials have promised visitors to its Vilas Zoo that the experience of walking the grounds, viewing the award-winning exhibits and their animals, attending educational camps and having lunch at the Glacier Grille will remain the same this week as they have always been.

Behind the scenes, though, the operational model the zoo has used for decades has been upended.

Two weeks ago, negotiators with the county Executive’s Office decided to end the partnership agreement with the society. County Executive Joe Parisi said financial questions and the possibility of the zoo losing its accreditation through the Association of Zoos and Aquariums led to the decision.

Society board members dispute both of those points, arguing that the breakdown in contract talks was the result of simple misunderstandings and not enough meetings by the negotiating teams.

Society employees on Thursday began moving out of their office in the zoo’s Visitor Center. Each of its 13 full-time staffers were laid off over the weekend, along with about 50 part-time or seasonal employees who run concessions, clean or manage the gift shop.

All that remains of the society is its board and about $6 million it has raised that will be moved into a trust to be co-managed by the society and the county.

In the past 10 years, the society’s fundraising capabilities have grown dramatically, board members say. In that time, the society has given $17 million to the zoo, which included funding half of the award-winning Arctic Passage exhibit and the entirety of the Wisconsin Heritage exhibit, which houses the zoo’s badgers and all of the Animal Health Center. Its next building project was going to be a reconstruction of the zoo’s main entrance, Prange said.

For about 10 months, the society and the county have been discussing updates to the agreement that has governed the society’s operations at the zoo. Amy Supple, vice chair of the society’s board, said the society made suggestions that would advance the strategic plan, which had just been completed the previous year by zoo staff with the society, the county and a consultant.

Parisi’s chief of staff, Josh Wescott, said the society was frequently attaching conditions or demands to increase funding for county staff, who manage all animal operations at the zoo, which would have threatened AZA accreditation.

AZA accreditation, which the zoo has maintained since 1976, is vital, zoo director Ronda Schwetz said at a County Board committee meeting last week. Accreditation allows the zoo to house endangered animals such as the polar bears, red panda and orangutans.

Schwetz did not respond to multiple requests for an interview.

Supple said accreditation is also important to the society and that it never intended to jeopardize it during negotiations or when it had proposed a contract in December.

“As Ronda (Schwetz) mentioned (at the committee meeting), we were surprised that we both participated in a strategic plan that apparently didn’t meet the standards,” Supple said. “We would have relied on her to guide that.”

The county contends the society never gave up demands to be independent from the zoo director’s authority, which could have threatened the AZA accreditation. But Supple said the suggested language was the result of a misunderstanding and could have been worked out in further negotiations.

“I think what’s been totally lost is the fact that we have a strong nonprofit with an operating reserve and endowment, and everybody knew that it was only designed to make sure that the free zoo is here for another hundred years,” Prange said.

Now, the county is working on a set of requirements for a new fundraising partnership to be decided later this year.

Parisi has said the society can apply for that role when proposals are requested this summer. Supple and Prange said they don’t think that will be possible. Without any staff to demonstrate fundraising ability, Supple said the skeleton crew of volunteer board members won’t be able to compete with other organizations.

Another mounting problem in the negotiations, Wescott said, was the society’s lack of transparency with its financials. He said the society, without county input, diverted too much money into an endowment and reserve fund and that the county didn’t have access to the society’s financial records.

Hicklin said he had requested financial records from the society on several occasions and none of those requests have been denied.

Supple said Schwetz or one of her representatives were welcome to attend the society’s monthly board meetings where finances were discussed. Wescott disputed that, saying Schwetz was not allowed in many board meetings.

“There were multiple ways financial information was communicated and transparent to the county and the county staff,” Supple said. “Whether that got translated between them, we don’t know nor are we responsible for.”

“To say that we have to have this large reserve and an endowment in case something happens to the zoo, I don’t see a lot happening to the zoo given the stability of all of the partners,” Hicklin said.

More in Conflict at Vilas Zoo over money, operations (3 of 10)

The county is working to hire nine new positions, sign a contract with a concessions operator and refine requirements for a fundraising partner.

Alternative education option Operation Fresh Start recently moved into a new building on Madison's East Side largely renovated by the young people served by the program.

Because of the intense rains last year coupled with fast snow melt and near-record freezing temperatures, the prairie dogs burrowed through the winter froze, despite the extra bedding that was provided by zookeepers.

The rides and concessions never stopped running, nearly all employees were rehired and the zoo will likely maintain its AZA accreditation, director Ronda Schwetz says.

Zoo donation boxes at heart of another dispute between county, former fundraiser

It's not clear that including greeter box money would have increased the amount the county received.

Movers and staff members clear out the offices of the Henry Vilas Zoological Society in the Visitor Center of the Vilas Zoo in Madison late last week. Dane County has ended its partnership with the society.

Tressa Steuber, former membership director for the Henry Vilas Zoological Society, works to organize her computer files as part of the society's move-out process from the zoo's Visitor Center.

A mural depicting the early days of the Vilas Zoo, including the 1914 establishment of the Henry Vilas Zoological Society, is displayed on a wall of the zoo's Visitor Center.