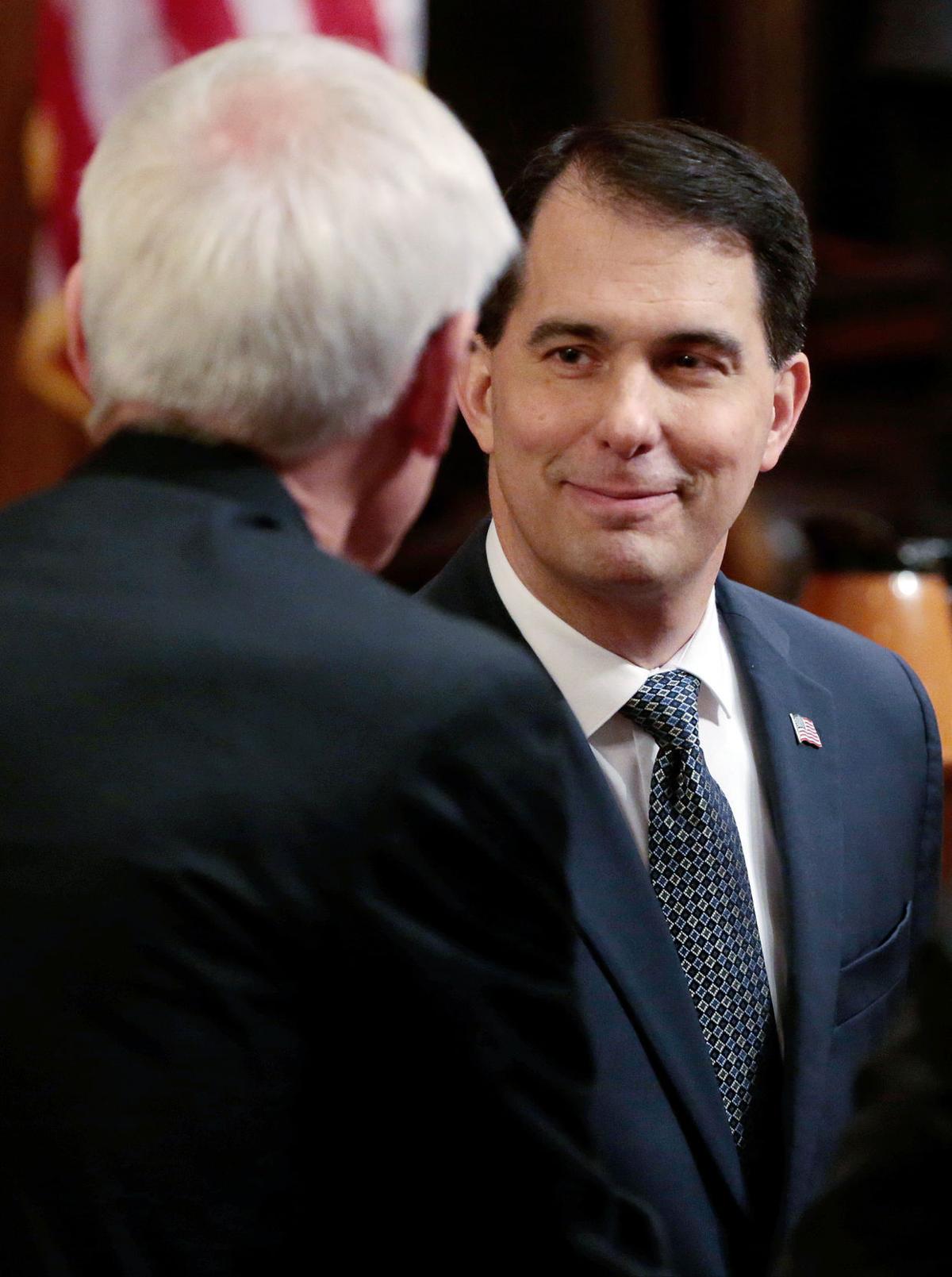 Gov. Scott Walker, facing, greets State Superintendent of Public Instruction Tony Evers after his State of the State address earlier this year. Evers is among several potential challengers to Walker in 2018. 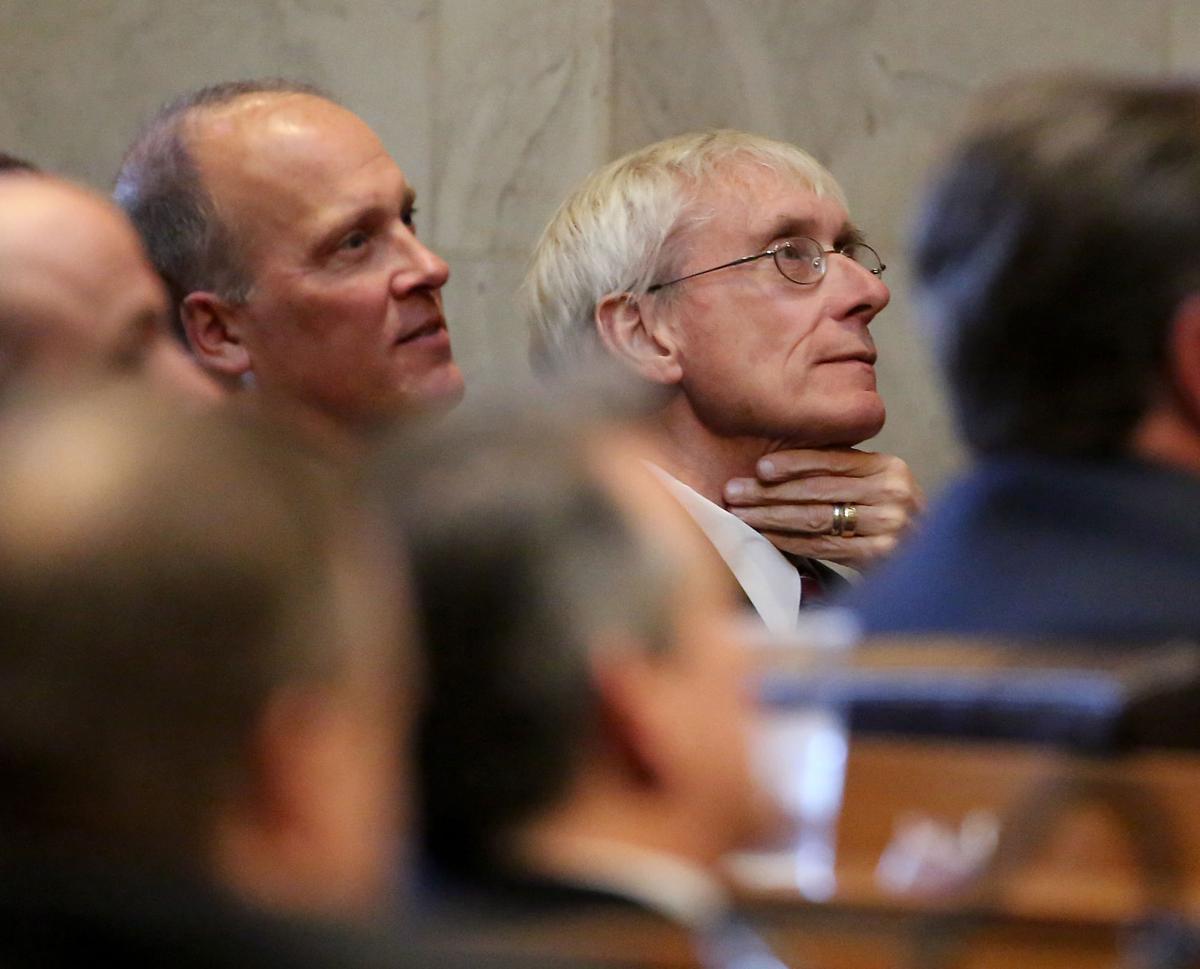 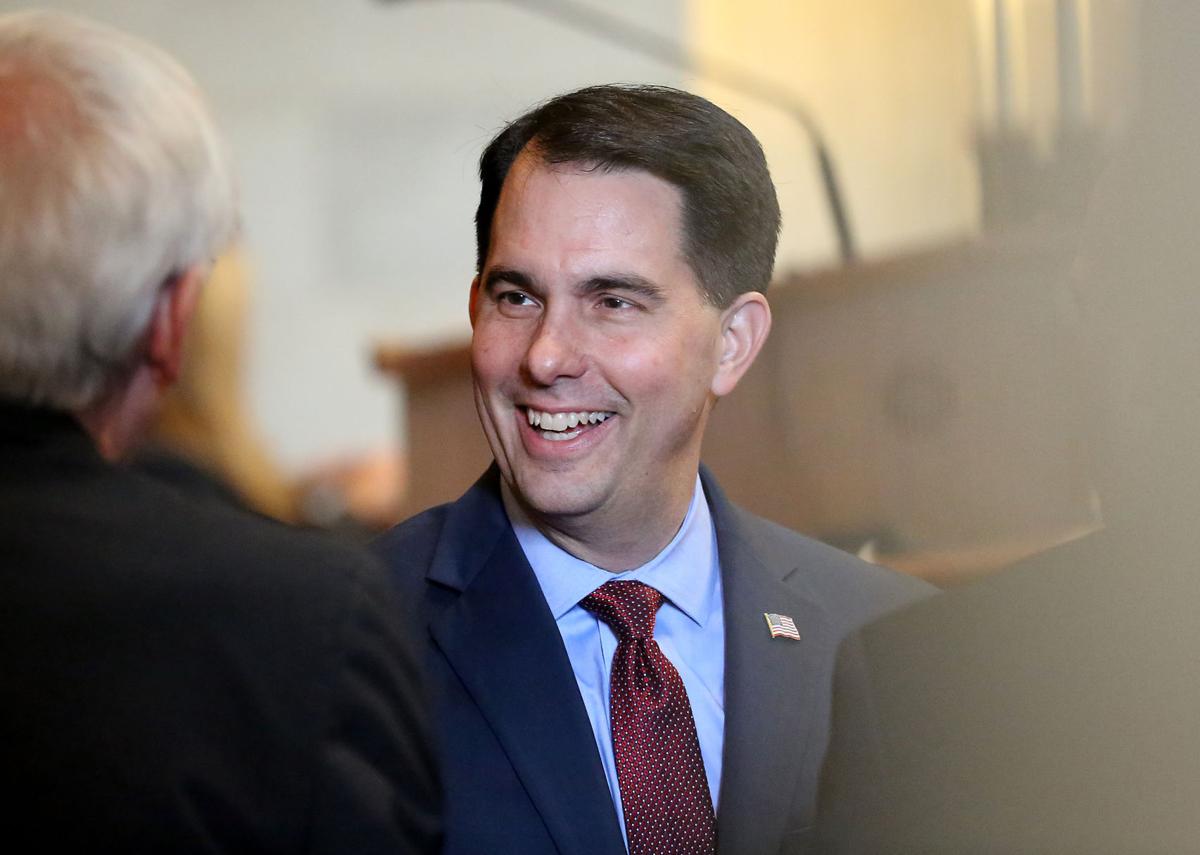 Wisconsin Gov. Scott Walker greets attendees in the Assembly chamber, including State Superintendent of Public Instruction Tony Evers, left, prior to delivering his state budget address on Feb. 8. Evers said last week he was contemplating a potential run for governor.

The 2018 Democratic gubernatorial primary got a jolt last week when Superintendent of Public Instruction Tony Evers said he was contemplating a potential run.

The 65-year-old Plymouth native recently won his third statewide race to lead the state’s public schools, winning 70 percent of the vote over a Republican-supported challenger. The only Democrat elected to the governor’s office in the past three decades, Jim Doyle, had won three previous statewide elections as attorney general.

The superintendent position is officially nonpartisan, but Evers was backed by Democrats, making him one of only three statewide officeholders with Democratic support. The other two are U.S. Sen. Tammy Baldwin of Madison, who faces her own tough re-election bid next year, and Secretary of State Doug La Follette, who mustered less than 3 percent in the recall election Democratic primary in 2012.

“There aren’t a lot of Democrats in Wisconsin who have run and won statewide,” said Joe Zepecki, communications director for 2014 Democratic gubernatorial candidate Mary Burke, who lost to Walker by almost five points. “Anyone who has should be taken seriously for any other statewide office.”

Former Democratic Party chairman Joe Wineke ticked off several advantages Evers could have in a primary and general election that Burke lacked, including statewide name recognition, familiarity with state policy and campaigning experience.

“He could scare some people off if he’s serious,” Wineke said.

Meanwhile, Republicans dismissed Democratic interest in Evers as grasping at straws given the number of higher profile Democrats who have announced they won’t run against Walker. The governor hasn’t formally announced his campaign but is expected to do so after signing a now-late 2017-19 state budget.

Walker’s campaign referred comment to the Republican Party of Wisconsin. Party spokesman Alec Zimmerman called Evers “another tax-and-spend Madison liberal who would take us back to the days of big government special interest control in Madison,” citing Evers’ opposition to 2011 Act 10, which stripped power from public sector unions and helped balance the state budget.

Republican strategist Mark Graul said Democrats will struggle against Walker, given his record turning a budget deficit into a surplus, billions of dollars in tax cuts and the state’s near-record low unemployment.

“Evers is going to have a hard time making an argument for why he would be better than the governor on these issues,” Graul said.

Evers also has experience fundraising statewide, but nothing like he would experience in a governor’s race. He raised about $440,000 in his recent re-election bid. Walker spent more than $36 million in 2014.

But the list of potential candidates has continued to grow to as many as nine names plus two lesser-known candidates who have already declared their candidacy.

In interviews last week after the Wisconsin State Journal first reported Evers’ interest, a few of those potential candidates welcomed Evers getting into the race while adding it won’t affect their decision whether to run.

McCabe said based on feedback he has received so far he plans to launch a campaign in September, though he hasn’t determined whether it will be as a Democrat or independent. He said some time before September he will file the initial paperwork with the state Elections Commission.

“He’s got a lot going for him, and he would fit into the race nicely,” McCabe said of Evers.

“He obviously would be seen as an education candidate and maybe a single-issue candidate,” McCabe said.

Madison Mayor Paul Soglin, who plans to make a decision after Labor Day, declined to comment on other potential candidates, but said Evers’ decision wouldn’t affect his own.

“Whoever wins the Democratic nomination I am convinced will be able to beat Scott Walker,” Soglin said.

Flynn welcomed a crowded primary to help strengthen the eventual nominee. He said he expects to make a decision by September, though he hasn’t set a timeline for when he might announce his candidacy.

“I would suspect most people who are serious about doing this would be inclined to make up their mind before Labor Day,” Flynn said.

Gronik said he has tremendous respect for Evers. He said if he gets in the race he would focus on contrasting his vision for the state with Walker’s.

Vinehout, who won the straw poll at the Democratic Party’s state convention — which didn’t even include Evers — has filed initial campaign paperwork, but hasn’t declared her candidacy.

She was unavailable for an interview Friday, according to a spokeswoman. Some other potential candidates didn’t respond to a request for comment.

UW-Madison political science professor Barry Burden grouped Evers in with Soglin and McCabe as unexpected candidates, but added he stands out from the list of 11 names in that he has won statewide office multiple times.

Editor's Note: This story has been corrected to indicate that Susan Happ is the Jefferson County District Attorney.

A former Marine and past-president of a national college Democratic group has launched a Republican bid for the U.S. Senate in Wisconsin, beco…

Evers on Wednesday announced he is running against Gov. Scott Walker.

Gov. Scott Walker, facing, greets State Superintendent of Public Instruction Tony Evers after his State of the State address earlier this year. Evers is among several potential challengers to Walker in 2018.

Wisconsin Gov. Scott Walker greets attendees in the Assembly chamber, including State Superintendent of Public Instruction Tony Evers, left, prior to delivering his state budget address on Feb. 8. Evers said last week he was contemplating a potential run for governor.