A day after the Wisconsin Supreme Court tossed out a statewide stay-at-home order, cities and counties embarked on a hodge-podge of strategies for containing the COVID-19 pandemic, ranging from continuing the state order at the local level to allowing bars, restaurants and retail establishments to open up without restrictions.

Wednesday’s court ruling threw much of the state into chaos, as bars in some areas immediately reopened to packed houses while public health authorities in places such as Dane and Milwaukee counties imposed their own stay-at-home orders.

Gov. Tony Evers and Republican leaders in the Legislature began taking tentative steps toward crafting a new statewide approach after the Legislature successfully challenged Health Services Secretary Andrea Palm’s emergency orders. But any new plan could take days or weeks to work out.

In the meantime, local orders — primarily in south-central and eastern Wisconsin and the Fox Valley — mandated the continued closure of bars, restaurants and nonessential businesses except for delivery, takeout or curbside service. 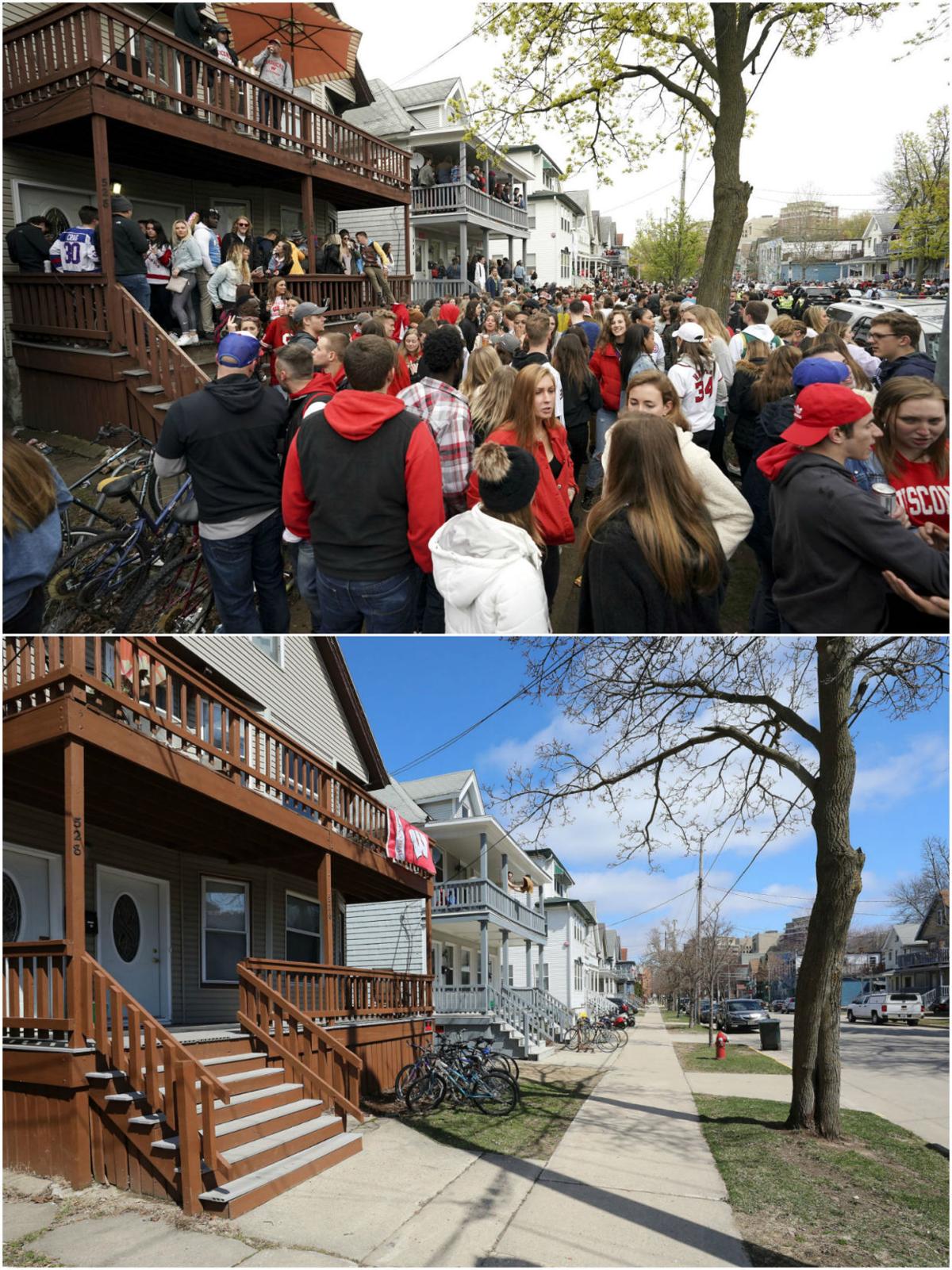 The 50th Mifflin Street Block Party on April 27, 2019, above, and the same location on Wednesday. 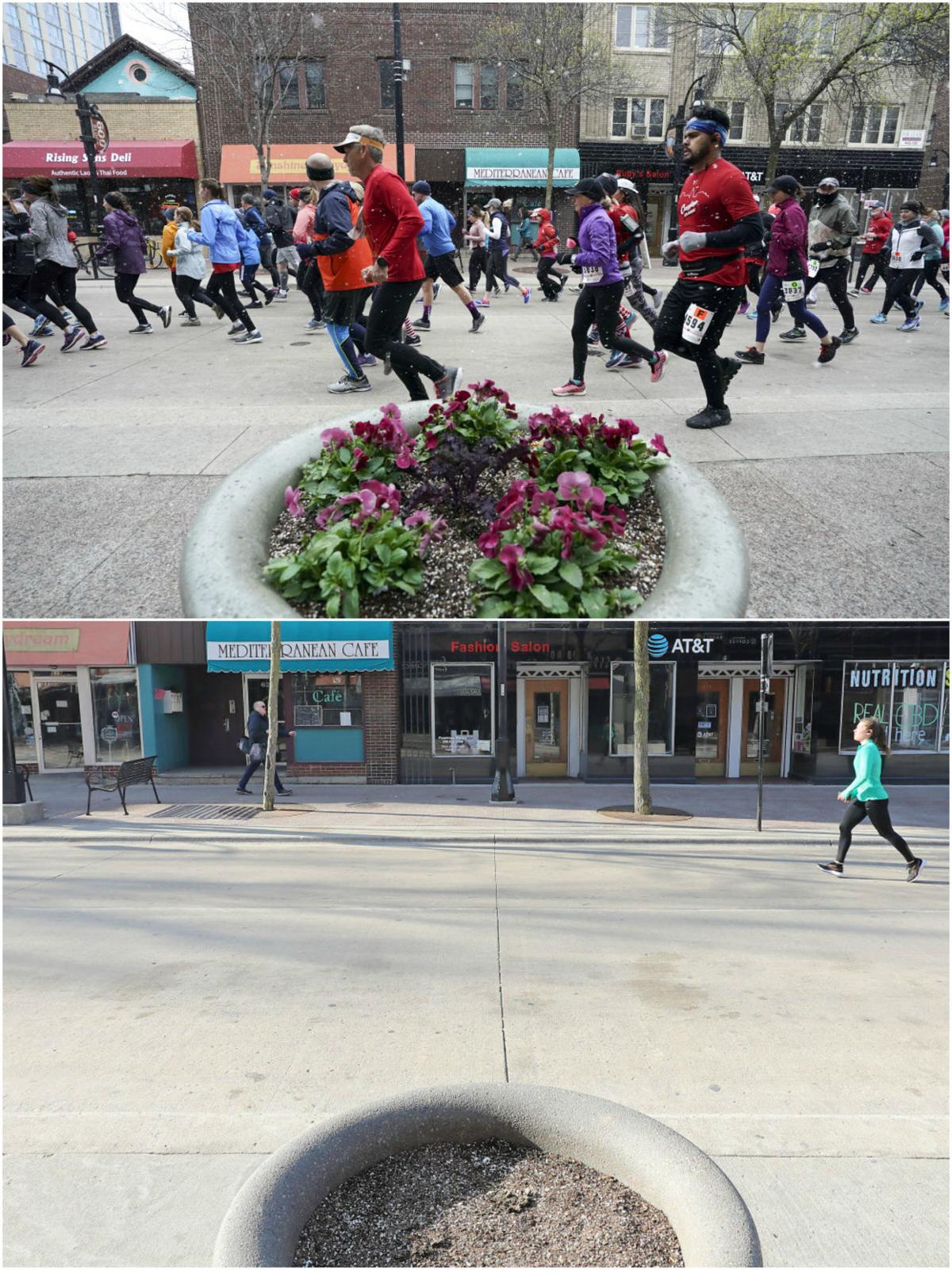 Runners racing up State Street on April 27, 2019, during the annual Crazylegs Classic in Madison, above, and the same spot on Thursday. 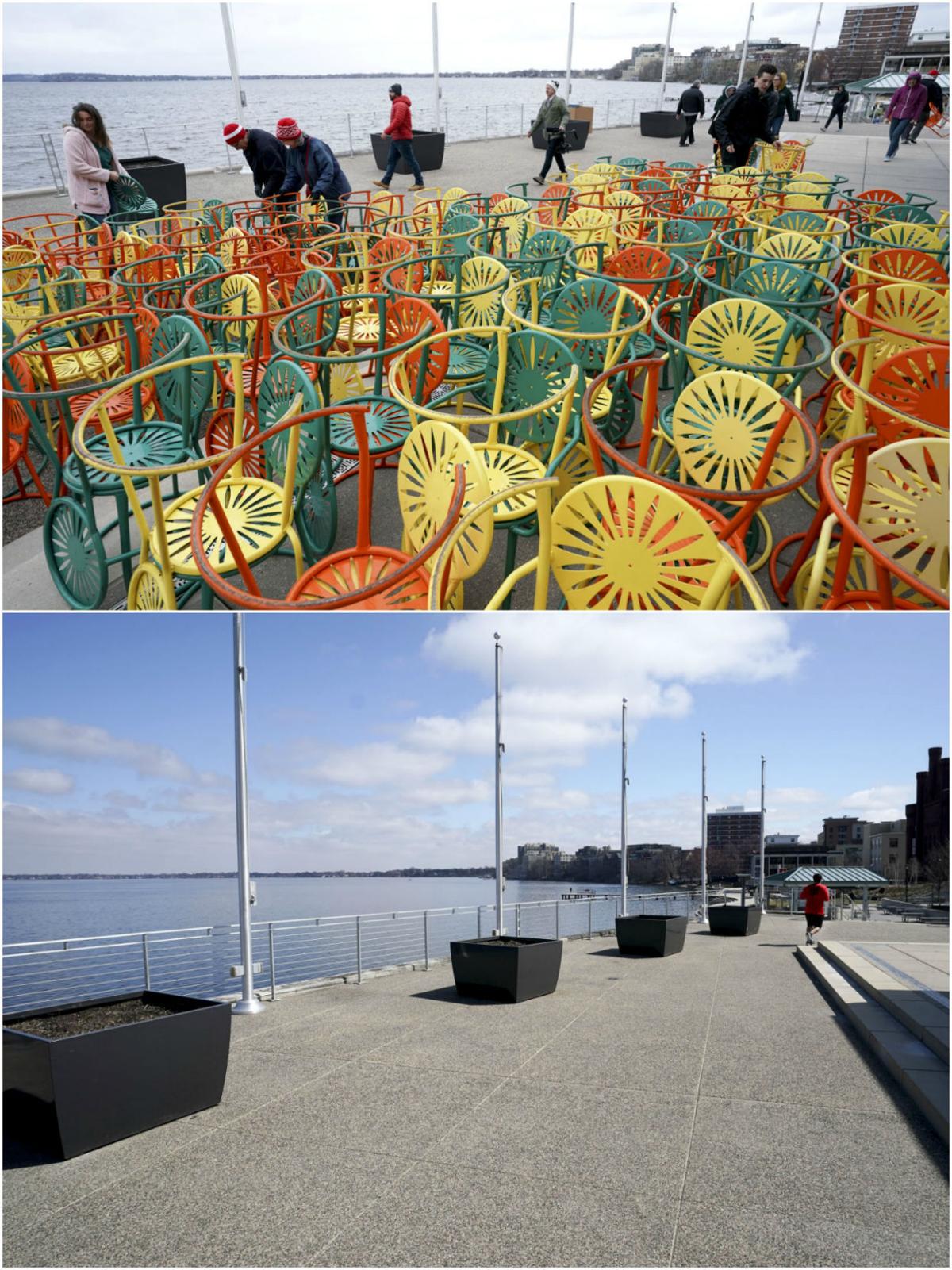 More than 1,000 signature chairs waiting to be carried down to the Memorial Union Terrace on April 18, 2019,  and an empty upper patio on Wednesday. 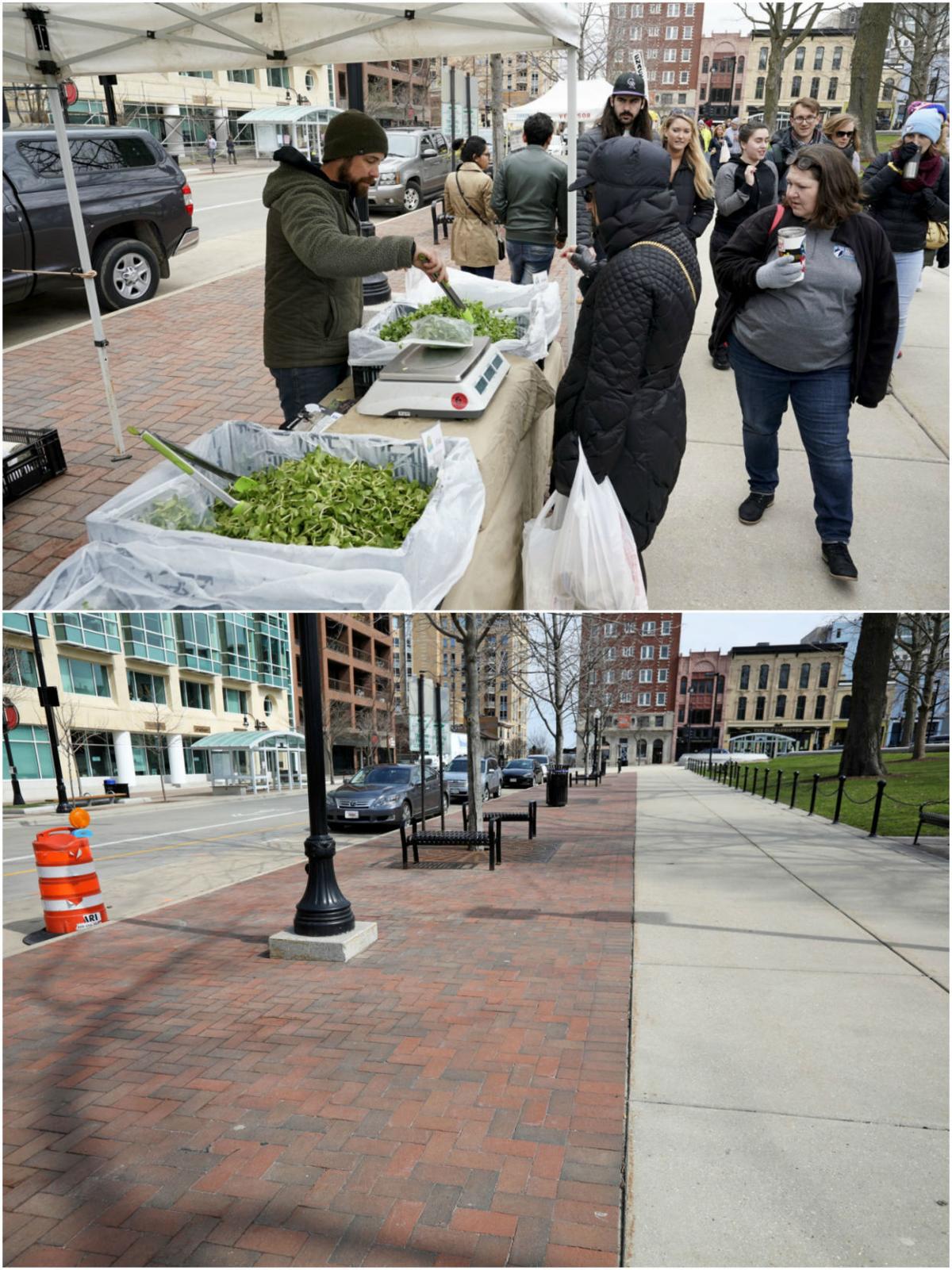 People shopping on the first day of the Dane County Farmers Market on April 13, 2019, on Capitol Square in Madison, above, and the same spot Thursday. 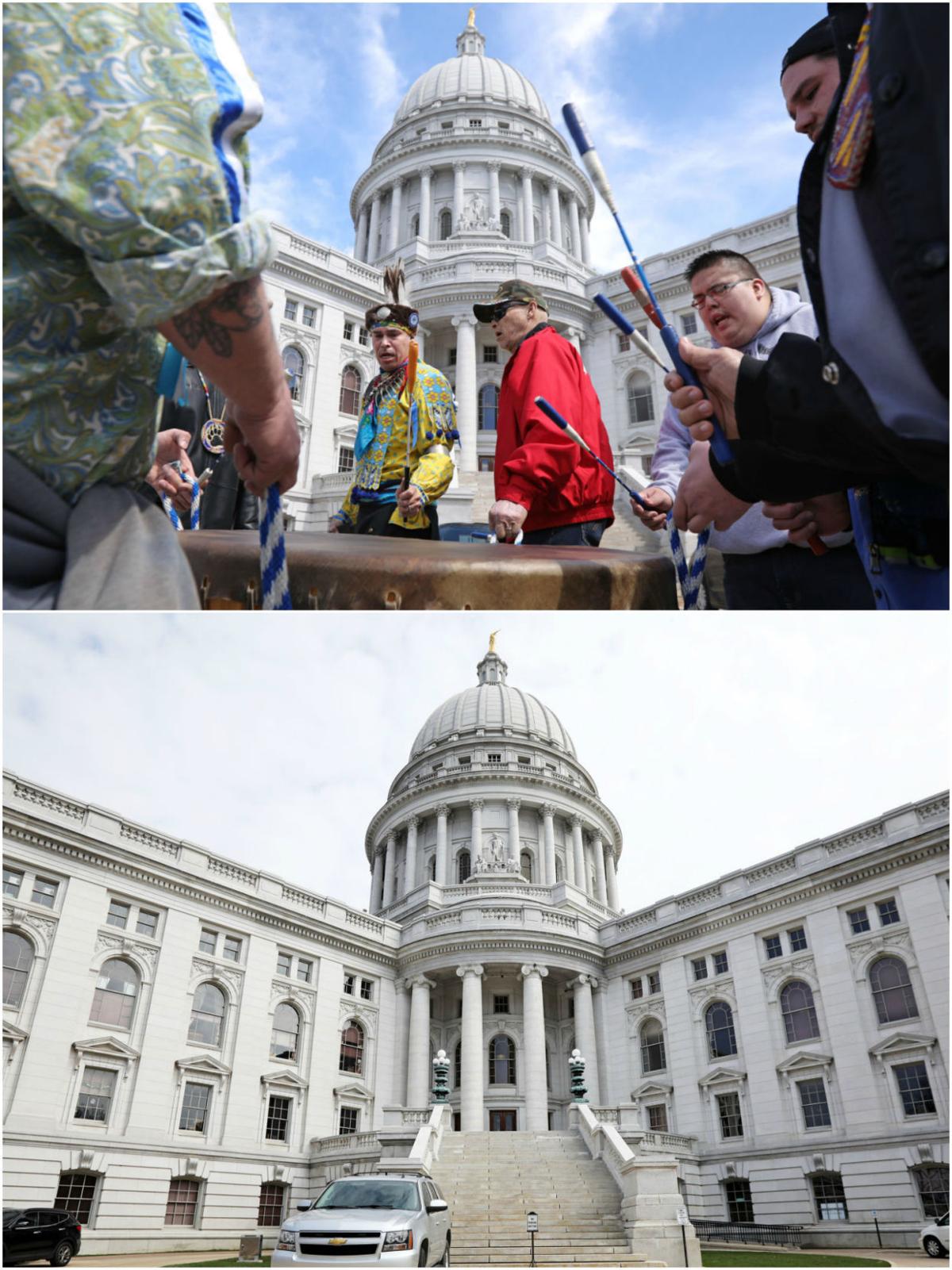 Drummers making their way to the state Capitol for the annual State of the Tribes address on April 9, 2019, above, and the same spot Thursday. 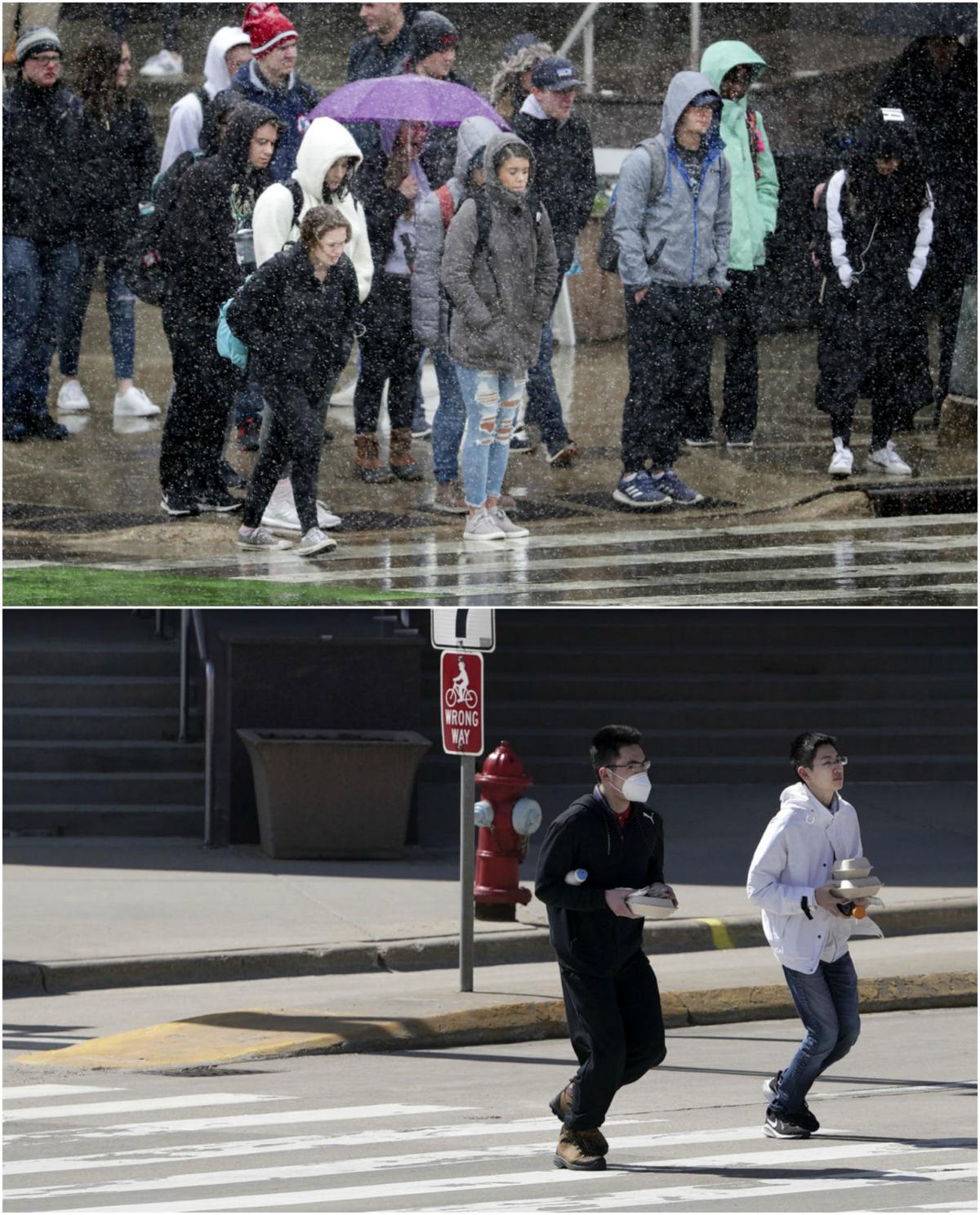 Pedestrians waiting to cross University Avenue on the UW-Madison campus on April 10, 2019, above, and the same spot Wednesday. 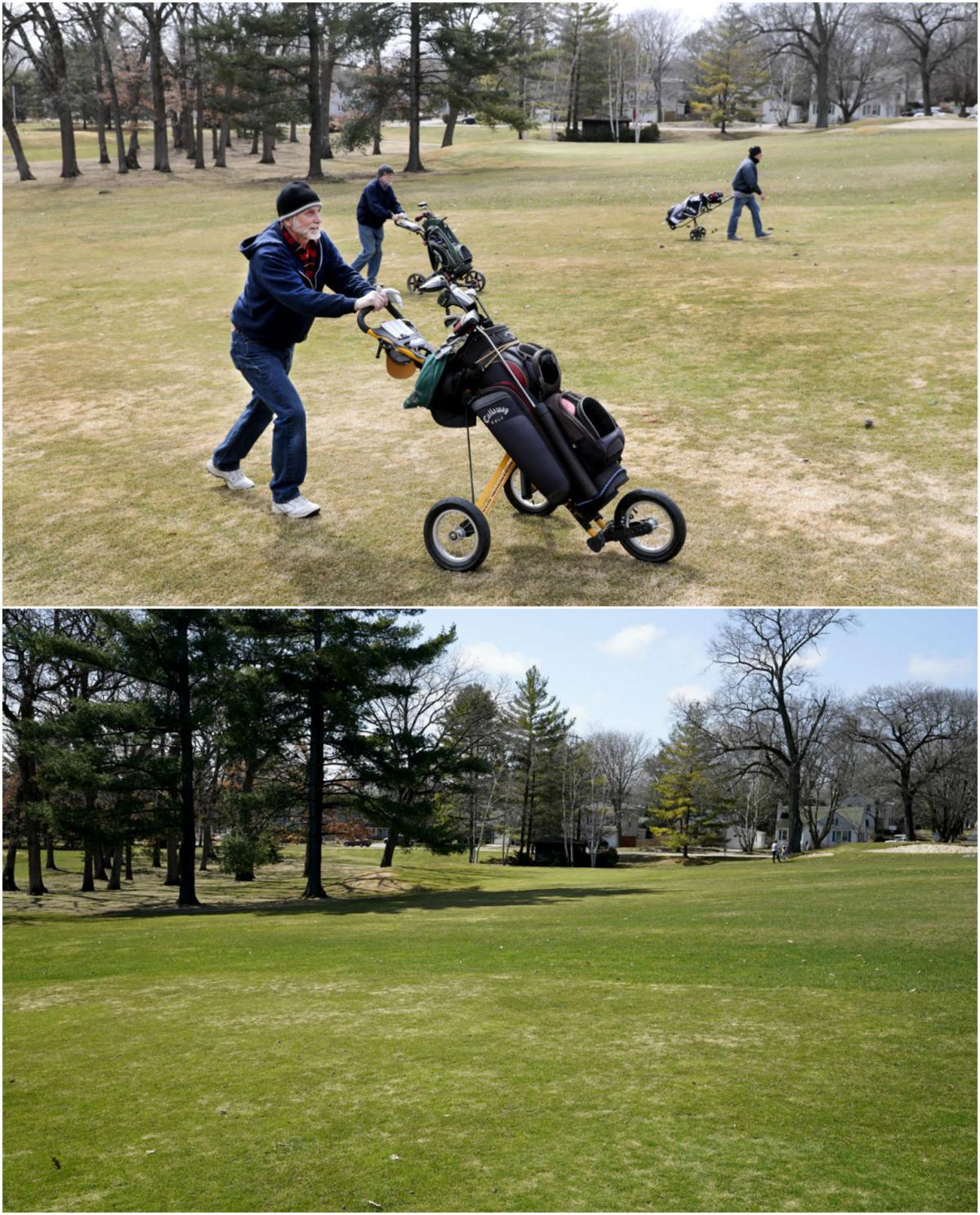 Golfers walking up the 4th fairway at Glenway Golf Course in Madison on April 1, 2019, above, and the same spot Wednesday.

The confusion over where the state goes next comes as the number of confirmed cases of COVID-19 and the percentage of positive tests ticked upward after several days in which both measures had generally been going down. As of Thursday, there were 11,275 confirmed cases of COVID-19 in Wisconsin and 434 deaths, with about 6.4% of those tested coming back positive, according to the state Department of Health Services.

Evers had been slowly easing restrictions on closed businesses in Wisconsin as the percentage of new cases dropped and as other metrics that were a part of his reopening plan were met. Earlier this week, the governor allowed all nonessential retail businesses to allow up to five customers in a store at one time.

Some businesses didn’t waste a moment celebrating Wednesday’s court’s ruling, which found Palm exceeded her authority by extending the administration’s “safer at home” order without involving the Legislature. The Tavern League of Wisconsin swiftly posted the news on its website, telling members, “You can OPEN IMMEDIATELY!“ Nick’s Bar in Platteville, in far southwestern Wisconsin, posted a 30-second video late Wednesday that showed the bar teeming with people drinking, talking and bobbing their heads to music.

Others took a more measured approach, saying they planned to wait until May 26, when the state’s extended shutdown order was due to expire. Even for those that do plan to open, the Wisconsin Restaurant Association urged members to follow state and association guidelines for reopening safely. And some large chains planned to stay closed indefinitely.

Menomonee Falls-based Kohl’s had not set a date to open any of its Wisconsin stores, although stores in some other states reopened this week.

“Businesses that want to reopen are doing the same thing that businesses have been doing all along throughout this,” Manley said.

Few salons and barbershops appeared ready to reopen immediately, even in places with no local shutdown order, but several were planning to resume business in a week or two.

A few hours after announcing plans to reopen next week, Annie Brown, owner of Annie’s Barbershop in Reedsburg, and the two other barbers who work there were booked through the week with more than 100 appointments scheduled.

“We are eager to reopen because our financial situation is real,” Brown said. “Having to close was terrifying.”

Brown and the other barbers lost close to two months of pay from appointments that couldn’t be held under the order.

Brown was frustrated by Evers’ “safer at home” restrictions, she said, because her profession already requires disinfectant protocols to be followed under normal conditions.

Even with the restrictions lifted, Brown said it won’t quite be business as usual at the barbershop.

“We’re going to reopen with COVID on the brain,” Brown said, including extra sanitation and staggering appointments to minimize customers coming in contact with one another. Customers will also be asked to wait outside or in their cars until their appointment, and barbers will wear masks and have masks available for customers upon request.

In Muscoda in northeastern Grant County, Janae Hatch hasn’t cut or styled a head of hair since March 19. On Thursday, she was busy answering the phone at Top Notch Hair Design as clients began making appointments for next week. The shop is scheduled to open on Monday with plenty of hand sanitizer, masks for workers and alternating schedules so the four chairs in the shop aren’t occupied all at the same time. Customers will also be required to wear masks.

“There’s just so many unknown questions,” said Hatch, who has been cutting hair for eight years but isn’t concerned about her safety. “I feel like people will be healthy coming in. Or at least they should be.”

At The Cutting Edge Hair and Wellness Salon in Richland Center, owner Danielle Toney Munz was busy cleaning for Friday’s opening after not expecting to resume operations until late June or July. She was apprehensive about opening because she knows firsthand about the severity of the coronavirus. One of her clients was among those from Richland County who died from the virus, while another customer recovered from the disease.

“That makes it hard,” Toney Munz said of her decision to reopen. “I think it was very irresponsible for (the Supreme Court) to just announce late (Wednesday) night that we could open (Thursday). I don’t think there was a lot of thought put behind that, especially for businesses like ours with very strict rules and measures.”

She’s also requiring masks be worn by all of her customers — and will wear one herself — and is installing two air purifiers. And she plans to sanitize between each appointment and has purchased disposable capes, stopped taking walk-ins and will only allow one person in the waiting room at a time.

“I feel we’re as prepared as we’ll ever be,” Toney Munz said. “I’d rather overdo it than underdo.”

Masks, closures and distancing: A look at how COVID-19 is affecting Wisconsin