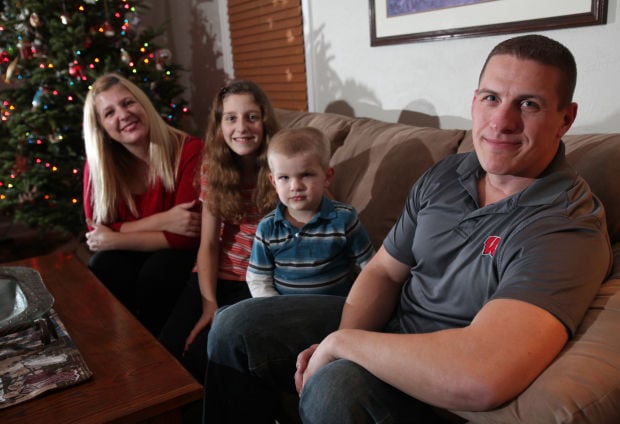 Eric Pizer, an Iraq War veteran, with his wife Jennifer Harris, stepdaughter, Bella, 12, and son, Xander, 4, at their home in Madison. Pizer would like a pardon for a 2004 felony conviction from a bar fight that occurred two days after he returned home from war. 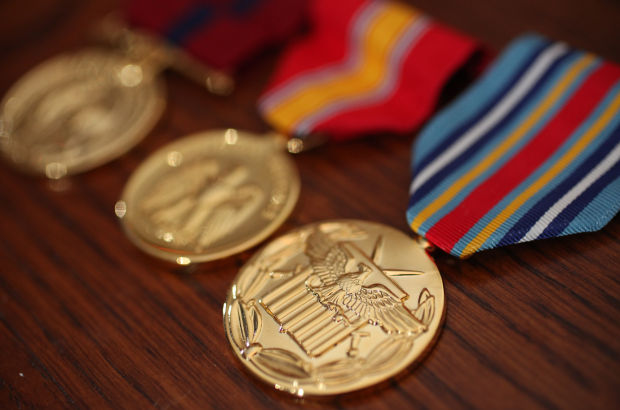 Veteran Eric Pizer's medals including the Global War on Terrorism Expeditionary Medal, at right, at his home in Madison, Pizer would like a pardon for a 2004 felony. 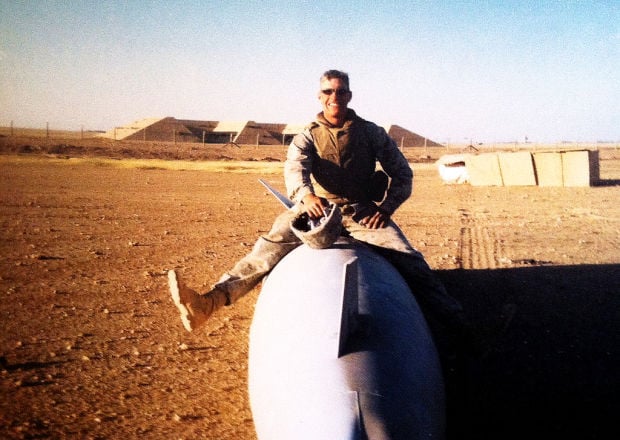 Eric Pizer, who served two tours while serving in the Marine Corps, is seen here in 2004 while stationed in Iraq. 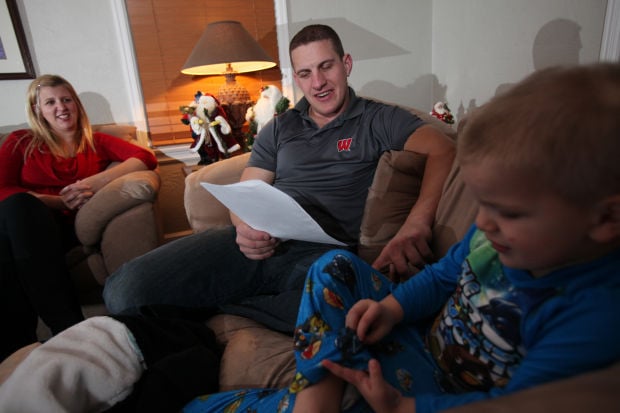 Eric Pizer, an Iraq War veteran, goes over song lyrics with his son, Xander, 4, for his holiday program at school, with his wife Jennifer Harris, at left, at their home in Madison. 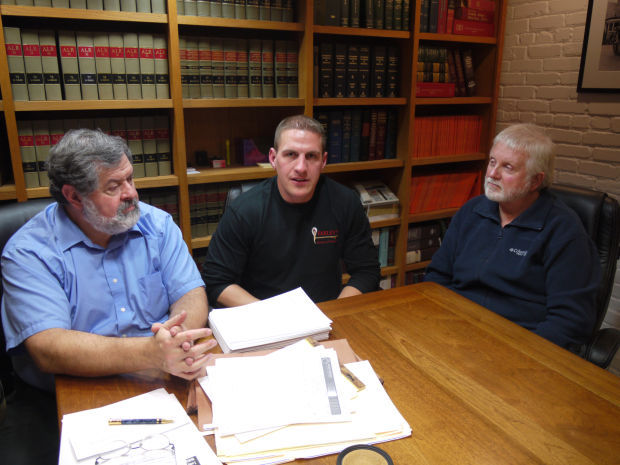 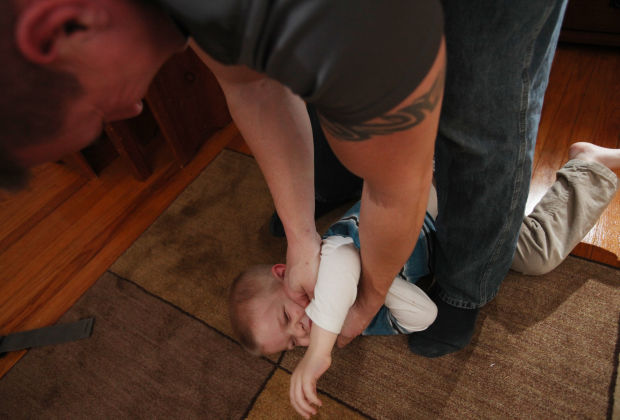 Eric Pizer, an Iraq War veteran, horses around with his son, Xander, 4, at their home in Madison.

The transition from decorated Iraq War veteran to felon happened in an instant for Eric Pizer.

A night of drinking. One punch. A broken nose. A felony charge.

Pizer wishes he could take back that moment in 2004 just two days after he returned to Wisconsin from the war.

So Pizer, of Madison, is putting his hopes in something that would seem nearly as unlikely: A change of heart by Gov. Scott Walker.

Pizer is hoping for a pardon. And Walker says he’s not giving any.

“Early in his administration, Gov. Walker made the decision not to issue pardons,” Walker spokesman Tom Evenson said, “and his position has not changed.”

The past five governors — Democrats and Republicans alike — have together issued more than 800 pardons. Walker has granted zero.

Pizer knows a pardon is a long shot. But he is convinced it’s not impossible.

“I’m very optimistic that eventually, something will give and allow myself to receive a pardon for my felony,” he said.

Pizer signed up for the Marine Corps even before graduation from River Valley High School in Spring Green in 2000. Unlike many who came after him, Pizer, of Plain, did not enlist because of the patriotic fervor that engulfed many young men and women after the attacks of Sept. 11, 2001.

He just wanted to serve.

During his four years in the Marines, the 6-foot-2 former high school wrestler and football player excelled, earning two commendations and the rank of corporal.

Pizer served two tours of duty, one in Kuwait and one in Iraq. During that deployment, he faced peril on refueling missions from bombs hidden along the roads and from rocket-propelled grenades fired into the Al Asad Airbase, where he was stationed.

One night, Pizer said, a grenade hit the wall just outside his tent, blasting him out of his bunk.

His second deployment was voluntary, said Tim Woods, a fellow Marine who is now an officer for the Cumberland County Sheriff’s Department in Bridgeton, N.J.

“He didn’t have to go,” Woods wrote in a 2011 letter praising Pizer’s character. “In fact, in order to go on a second tour of duty, Eric had to extend his enlistment by two months. No one asked him to do it. He did it for one reason: Eric had four new Marines under his command who had never been in combat or to the Middle East before ... he knew that staying with his team gave them the best chance for their safe return home.”

Two days after his return, on Sept. 18, 2004, Pizer, then 23, was out on the town in Boscobel. After some bar-hopping, he stepped into the middle of a scuffle in an alley between his friend and a jealous husband, trying to break it up.

“(They were) poking me in the chest, chest-bumping me, getting in my face ... When (the husband) came at me from my peripheral vision, my side, he said he was going to kill me ...

Because of his record, Pizer’s job prospects are much narrower. A husband and father of two children, Pizer has done factory work, construction and currently moves pianos ﻿.

In October 2012, Pizer earned an associate degree in criminal justice from Globe University with the goal of becoming a police officer. But because he’s a felon, working in law enforcement is out of the question.

He brought in Jack Zwieg, a Vietnam veteran and retired prosecutor for the former state Department of Regulation and Licensing.

Past attempts to get Pizer’s felony reduced to a misdemeanor were rebuffed by Grant County Assistant District Attorney Anthony Pozorski.

Shortly after Pizer was convicted, the prosecutor offered him one solution: Re-enlist, and the charge would be lowered.

But Pizer found the military doesn’t take people with felony convictions except in rare cases. And although he volunteered for a second deployment, Pizer, who by then was engaged to be married, was not eager to take a chance at being sent back to a war zone for a third time.

In 2012, Relles and Zwieg presented Pozorski with the letter from Woods and one from Rock County Circuit Judge James Daley, who runs the Veterans Treatment Court in Janesville.

Daley wrote that in the years since Pizer’s 2004 conviction, the criminal justice system had begun to recognize that many crimes committed by veterans stemmed from post-traumatic stress disorder or traumatic brain injury.

Many of those veterans are better served with treatment, not jail, Daley wrote.

The judge also revealed that he himself had suffered from crippling PTSD for decades after serving in Vietnam.

“From the facts provided to me concerning Mr. Pizer, it is clear to me that Mr. Pizer might also have issues relating to post traumatic stress disorder ... (or) traumatic brain injury,” Daley wrote.

Pizer did come back with some scars.

For years, he said, he obsessively scanned the road, seeing possible explosives in every deer carcass and culvert.

To this day, he sits at the back of the restaurant facing the door to make sure he can see what’s coming.

“You’ve got someone that’s trained to fight, that’s in a war zone, that comes home — it’s a combination that’s not good for anybody,” Pizer said. “Especially if you try picking a fight with that person, they’re going to be very volatile.”

In his letter to Pozorski, Zwieg asked the assistant district attorney to “exercise discretion to accomplish fairness and justice.”

Pozorski declined comment for this story but provided a letter he wrote in 2012 roundly rejecting Zwieg’s request to reduce the charge.

He wrote that Pizer got off easy, with no jail time. Any changes in law or the approach to veterans since 2004, Pozorski said, are irrelevant. And Frazier continues to suffer pain from the broken nose.

“I cannot in good conscience agree to re-open the felony conviction in this case and to dispose of this case as a misdemeanor,” Pozorski wrote.

The only option Pizer and his attorneys see now is for Walker or a future governor to issue a pardon. That action would not erase the conviction but would restore Pizer’s right to possess a firearm, which he needs to become a police officer.

But the governor, who has sole discretion over pardons, is not accepting any applications.

Pizer and his advocates haven’t applied for a pardon but stand ready to do so if Walker changes his mind.

Donald Leo Bach is a Madison attorney who advised Republican Gov. Tommy Thompson on pardons. Although he is a “big supporter” of Walker, Bach believes the governor is making a mistake in declining to consider pardons.

“The whole basis of this is there ought to be somebody — just one person — who can look at what society has done and say, ‘I forgive,’ ” Bach said.

Pizer, he said, sounds like a good candidate for a pardon. The fact that he served two tours overseas “tugs at my heart,” said Bach, a Vietnam veteran.

“When you get right down to it, there’s nothing in it for the governor. It’s only risk,” Bach said. “He is the only person among 5 million in the state that has that power.

“I would exercise that power.”

“You want people who have committed crimes to at least have the opportunity for redemption,” Relles said.

“Eric ... understands that he is not the only person in the state of Wisconsin who is deserving of a pardon. But he realizes that his case is one that, our hope would be, would open the governor’s eyes to how a particular individual can be affected in a way that, in the larger scheme of things, really isn’t fair.”

Supporters of Eric Pizer have set up a website at pardoneric.com and a Facebook page at www.facebook.com/PardonEric2014.

Eric Pizer, an Iraq War veteran, with his wife Jennifer Harris, stepdaughter, Bella, 12, and son, Xander, 4, at their home in Madison. Pizer would like a pardon for a 2004 felony conviction from a bar fight that occurred two days after he returned home from war.

Veteran Eric Pizer's medals including the Global War on Terrorism Expeditionary Medal, at right, at his home in Madison, Pizer would like a pardon for a 2004 felony.

Eric Pizer, who served two tours while serving in the Marine Corps, is seen here in 2004 while stationed in Iraq.

Eric Pizer, an Iraq War veteran, goes over song lyrics with his son, Xander, 4, for his holiday program at school, with his wife Jennifer Harris, at left, at their home in Madison.

Eric Pizer, an Iraq War veteran, horses around with his son, Xander, 4, at their home in Madison.