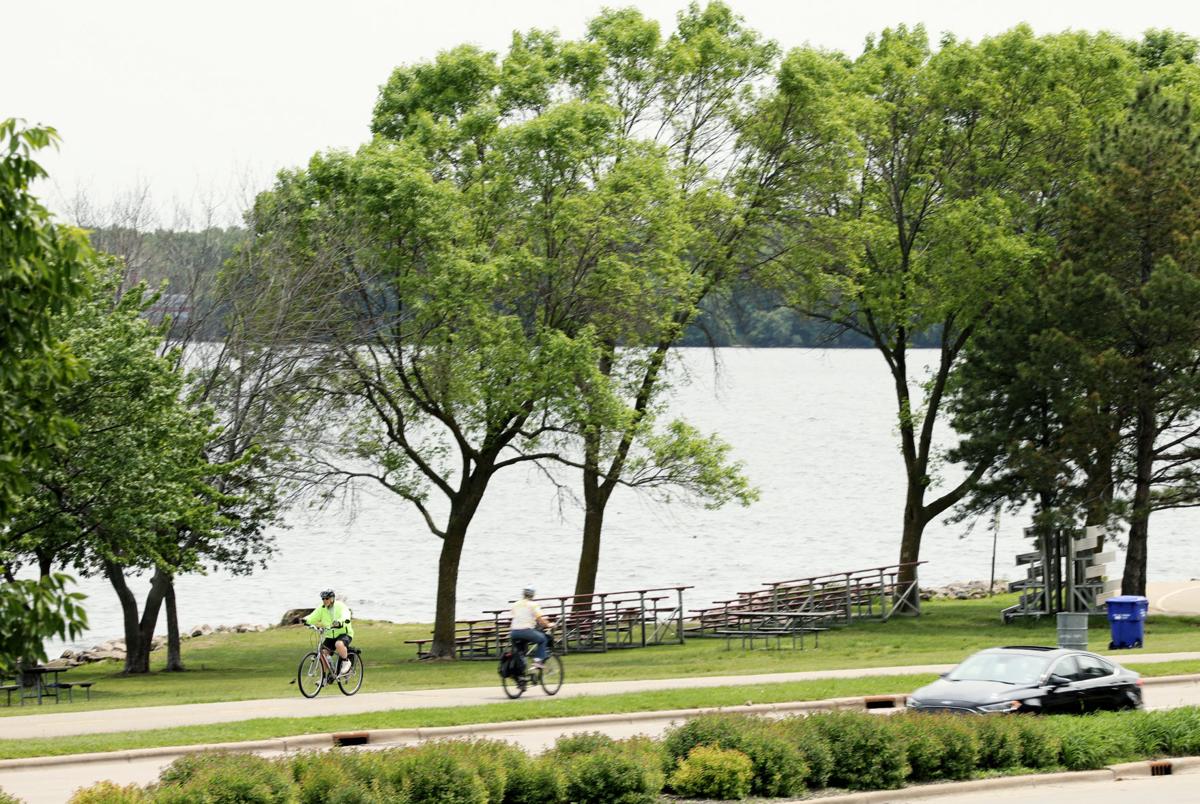 Cyclists ride along the Capital City Trail through Law Park on Lake Monona. The city Parks Division is hiring a consultant to do community outreach and technical study in preparation for a master plan process to explore how to better connect the narrow park to Downtown. 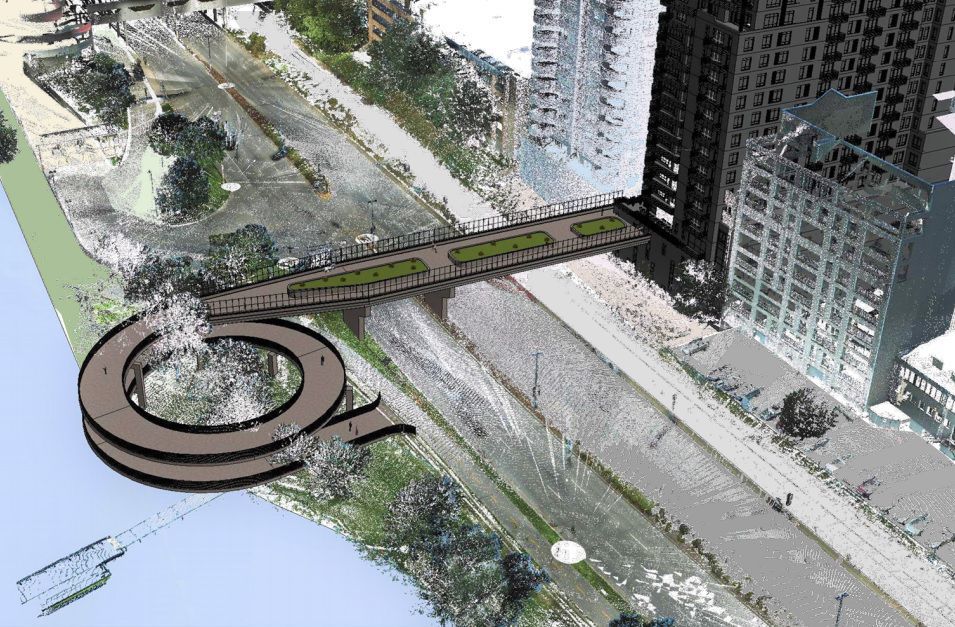 The city, as part of a study on the John Nolen Drive corridor in 2017, explored a bicycle-pedestrian bridge at 149 E. Wilson St. from Downtown to Law Park. 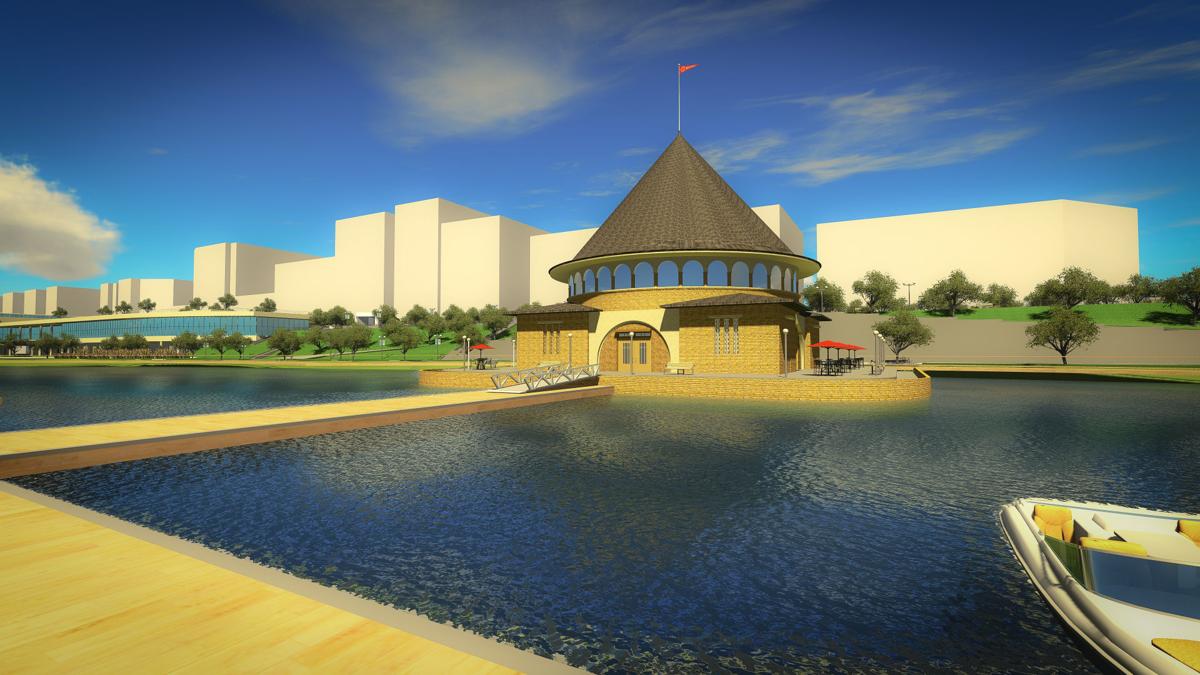 In one of many concepts, the Madison Design Professionals Workgroup suggested building the 1893 Frank Lloyd Wright boathouse at the east end of a new parkway that would end at Monona Terrace.

After decades of dreams and recent design concepts, Madison is poised to spend serious money to explore how to better connect Downtown with Law Park and Lake Monona.

The city is now finalizing a $190,000 contract with the national architectural, engineering and planning firm SmithGroup, which has an office in Madison, to create a brand for the initiative, engage the community, and do preliminary technical work on the site’s history, relevant city plans, existing conditions, future road and shoreline improvements and more. The effort would run through the end of the year.

But that’s just the beginning.

The outreach and study will lay the groundwork for a Law Park Master Plan that could be modest to grand in vision and include pedestrian bridges or even a terraced park built over John Nolen Drive and railroad tracks to the lake shore, expanding the park with lake fill, and a public boathouse designed by renowned architect Frank Lloyd Wright.

If there’s interest in the community and among policy makers, the city would couple local talent with national and potentially international expertise to help create a comprehensive plan that would address vexing challenges of topography, space limitations, flood mitigation, stormwater management and cost to connect Downtown to the lake.

Recent interest “has generated a buzz about this topic,” city parks superintendent Eric Knepp said. “Our hope is that we’ll have world-class talent involved in this project to solve what we feel is really unsolvable. How do you make it feel different than it does now?”

“Better late than never, we’re moving forward,” Verveer said. “I think everyone in the community would agree this has the potential of being one of the most monumental projects in recent memory. This could be a very big deal.”

The concept of an elaborate park on the Lake Monona shore has stirred the imagination for more than a century.

The shoreline park was originally conceived in 1911 by John Nolen in his plan Madison: A Model City, which envisioned a 5,000-foot-long esplanade that connected the lake to the State Capitol.

In 1943, a greatly reduced park was built on filled lake bed, establishing the current configuration offering 2,500 feet of shoreline on 4.7 acres.

Instead of being connected to Capitol Square, the park is separated by up to a 30-foot drop as well as the six-lane John Nolen Drive and railroad tracks. Access is limited to the far ends and by elevator and stairs through Monona Terrace, which opened in 1997.

Many imaginative plans to reconnect the park to Downtown have been offered over the decades, but none has been implemented.

Among them, architect Kenton Peters has offered many proposals, including one for an elaborate landscaped park built over John Nolen Drive and railroad tracks to the lake shore that would feature a restaurant, fountains, amphitheater, glass-enclosed “winter garden,” bike paths, perhaps a cascading waterfall, parking and the Frank Lloyd Wright boathouse and marina.

More recently, the Madison Design Professionals Workshop envisioned various alternatives for the waterfront, including near-term recommendations to reduce the clogged and dangerous “hairball” intersection of John Nolen Drive, East Wilson, Blair and Williamson streets and a long-term concept to cover the roadway and tracks with a park.

Those in the workshop support the city’s moving forward. “We’re very happy,” architect Tim Anderson said. “This is one of the goals we had, to work with the city in doing a plan for Law Park.”

In 2017, the city’s Engineering Division and consultant Strand Associates recommended a remedy to fix the hairball intersection and some other short-term options to improve traffic flow, bicycle and pedestrian connections. A construction project going on now will build the East Wilson, South Blount and Williamson street legs of the intersection. The John Nolen Drive and Blair Street legs are a state highway and the city is coordinating with the state Department of Transportation to have those improvements done in 2022.

The Engineering Division’s study also explored more ambitious, longer-term options, including a pedestrian bridge east of Monona Terrace over John Nolen Drive to Law Park and a pedestrian underpass west of the convention center connecting a path to the park. But the splashier, visionary concepts including a deck over John Nolen Drive with a surface park and parking below to connect Downtown and the park east of Monona Terrace were left to the planning of others.

Given the interest, now seems the time to bring a more comprehensive, city-led planning effort, Knepp said. “It’s rooted in tons of effort, but this is a new effort led by the city to establish a master plan process,” he said. “This is the right time for us to get active and lead a project.”

The challenges of the site are many.

The Downtown and park are separated by the 30-foot bluff, the convention center, the six-lane highway and the tracks, Knepp said.

The skinny park devotes a lot of space to pavement for a bicycle and pedestrian path, and has a large parking lot and underused boat launch on its east side, and the shoreline is protected by coarse stone rip-rap, limiting opportunities for direct interaction with the lake, he said.

“There isn’t a lot of land to work with,” Knepp said.

The city has paid $100,000 to acquire a right of way between 137 and 151 E. Wilson St. for a potential pedestrian bridge over John Nolen Drive and the railroad tracks, but there is little space to efficiently land the bridge in the park.

The first step for SmithGroup will be community engagement, said Mike Sturm, a landscape architect with the Parks Division.

“This is the city’s opportunity to start fresh and get input from the broader community,” he said. “This is the initial exploration of what’s possible.”

But also important will be the technical exploration of current site conditions and identification of potential improvement opportunities, which will provide accurate, current information for those engaged in the master plan process, Sturm said.

It’s far too early for precise cost estimates of potential improvements, Knepp said. Modest improvements, such as realigning the bike-pedestrian path and lake shore improvements, could be done for under $5 million, he said. But a major, once-in-a-generation project could cost $20 million or more, he said.

The effort will also address better bike and pedestrian access to Law Park hugs the shore of Lake Monona and look at private, visionary concepts to create a deck over John Nolen Drive with a park and parking to connect Downtown to Law Park.

Cyclists ride along the Capital City Trail through Law Park on Lake Monona. The city Parks Division is hiring a consultant to do community outreach and technical study in preparation for a master plan process to explore how to better connect the narrow park to Downtown.

The city, as part of a study on the John Nolen Drive corridor in 2017, explored a bicycle-pedestrian bridge at 149 E. Wilson St. from Downtown to Law Park.

In one of many concepts, the Madison Design Professionals Workgroup suggested building the 1893 Frank Lloyd Wright boathouse at the east end of a new parkway that would end at Monona Terrace.