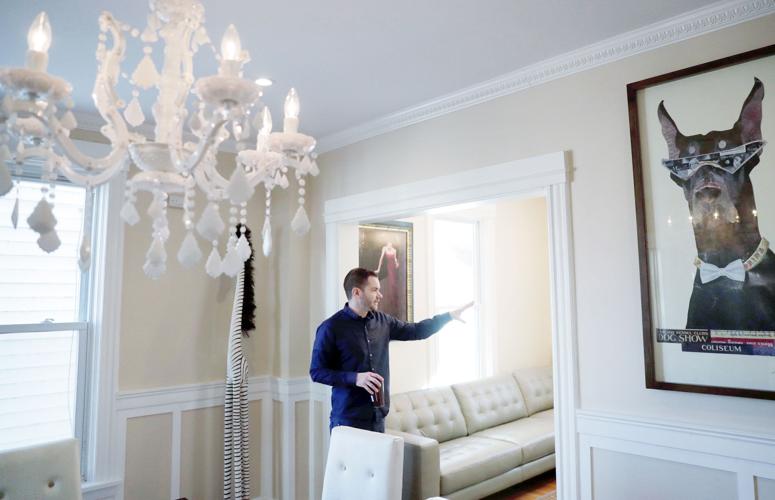 Peter Linsmeier shows the first floor of his renovated two-flat home near Capitol Square. Linsmeier used a $90,000 forgivable loan from the city to convert former student housing into owner-occupied housing with a rental apartment. 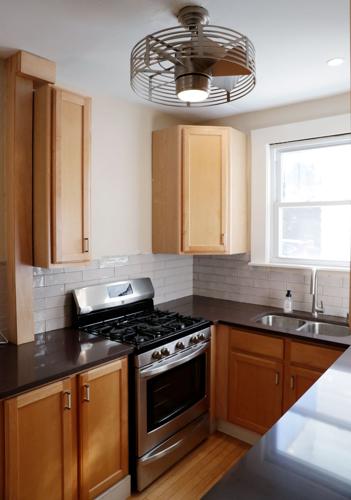 A kitchen under renovation at Peter Linsmeier's home in the Mansion Hill-James Madison Park area. 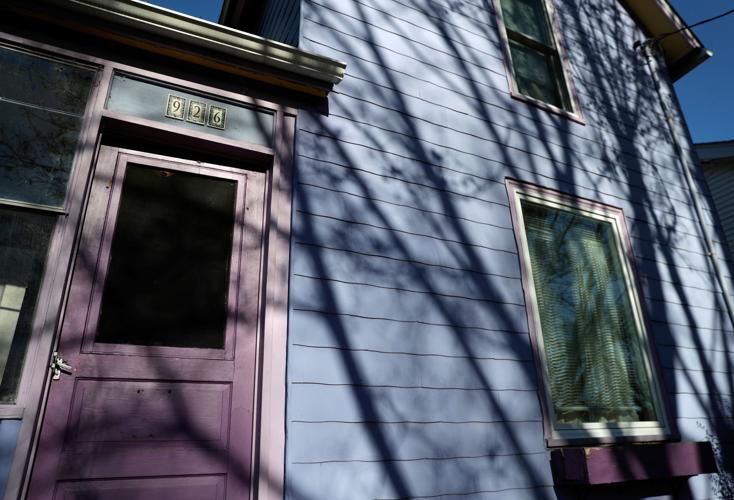 Peter Moran is using an $80,000 forgivable city loan to begin renovations at 926 Emerald St. in the Greenbush neighborhood. He has already replaced all windows and is doing interior work.

With his own investment and $90,000 from the city, Peter Linsmeier bought and remade a worn, three-story student rental house near Capitol Square, now living on the stylish first floor with plans to rent a refurbished apartment upstairs.

It’s exactly what Madison’s soon-ending, Small Cap TIF program is supposed to do.

The program, which delivers forgivable loans to help renovate carved-up properties and encourage owner-occupancy, has been tried in three neighborhoods Downtown and near UW-Madison.

The money “allowed me to improve the property to where it was attractive to live in,” he said. “It is great that we live in a city that values their existing home stock and is willing to invest resources to ensure they are improved, so they continue to be an asset.”

All told, since the city briefly created its initial Small Cap TIF program in the Bassett Neighborhood in 2007, it has awarded 23 loans totaling $1.9 million.

The biggest regret, perhaps, as the program closes at the end of the year, is that the city wasn’t more aggressive in budgeting and marketing so even more people would use it, officials said.

The city created the program to meet a challenge. Over decades, structures built as single-family homes in neighborhoods near Downtown and UW-Madison were chopped up into student-occupied, multi-unit rental properties. But over time, students began migrating from those older houses to new apartment buildings with attractive amenities near campus.

The trend softened the market for the older units, although the rental income still makes them profitable.

But many of the houses are at a turning point, badly needing investment, city real estate manager Matt Wachter said.

The city, meanwhile, wants to see housing upgrades, and more owner-occupied, even single-family homes, which helps diversify the housing stock and occupants and stabilizes neighborhoods.

But it costs a lot to rehabilitate a carved-up structure, so the city intervened. The approach, although no panacea, rests in a powerful tool normally used to attract development projects to areas that need it: tax incremental financing, or TIF.

Under TIF, the city and others with taxing authority agree to freeze the tax base in an area. The city uses taxes from growth to assist private projects or pay for streets or other public improvements there. When investments are repaid, the district is closed and the now more valuable property is fully returned to the regular tax rolls.

Small Cap TIF has a less rigorous review, and owners can get a loan to help make down payments and renovations with the sum forgiven under a specific set of conditions, such as keeping the home owner-occupied for a decade.

The loan is repaid — just like for a big development project — by new tax revenues flowing into the TIF district.

The first Small Cap TIF program was created in the Bassett neighborhood in September 2007, with owners eligible for up to $60,000 and a requirement that they remain in the home for a decade. The program ended in December 2008 with the already-scheduled closure of the TIF district. The city made two loans totaling $107,204.

“It took a bit of time to figure out how to start it,” city housing rehabilitation specialist Terri Goldbin said. “About the time it was starting to take off, we had to close it.”

The city took lessons from its Bassett experience, including a realization that $60,000 isn’t enough help, and that requiring the owner to live in the home for 10 years is too restrictive and doesn’t work for everyone, Wachter said.

So the city made changes, upping the loans to $80,000, $90,000 or $100,000, depending on the number of units in a building at the time of purchase, and changing the occupancy requirement to let an occupying owner sell the property as long as the new owner or owners live there for the remainder of the decade, he said.

The city doesn’t prescribe specific renovations but requires that 10 percent be spent on exterior renovations and safety problems must be addressed. And properties must comply with codes and zoning, Wachter said.

After renovation, properties can contain no more than three units, with one being owner-occupied. If the underlying zoning allows an occupant-owner to rent other units in the renovated building, that’s fine.

The city created Small Cap TIF programs in Mansion Hill-James Madison Park in 2011 and Greenbush in 2014. Both are scheduled to expire when TIF districts close at the end of 2017.

In Mansion Hill-James Madison Park, the city is using funds from a long-established, well-performing TIF district to repay loans.

Linsmeier’s purchase at 515 E. Mifflin St., just a few blocks off Capitol Square, was once a two-flat with three bedrooms on the first floor and four bedrooms above.

“I’m going to continue to invest, keep up and make improvements,” he said.

One of the program’s strengths “is getting owner-occupied homes, which helps to ‘anchor’ blocks,” said Ald. Ledell Zellers, 2nd District, who represents Mansion Hill-James Madison Park. “Many of the homes also have rental units which can be good for having more variety of living options in the neighborhood.”

In the Greenbush neighborhood, the city created a TIF district that would use new tax revenue from high-rise apartments being built along South Park and Mills streets specifically for the Small Cap TIF program and nothing else.

Peter Moran met his wife at UW-Madison and lived in the city for 20 years. They more recently resided in Northern Michigan and were attracted to the program because they wanted to make a two-story house at 926 Emerald St. suitable for them and his mother.

The house, built in 1906, had lots of deferred maintenance problems and Moran is using an $80,000 loan to replace all windows, renovate a kitchen and upstairs bathroom, add a first-floor bathroom, replace floors and build a garage.

The renovations, now being done, “would not have happened without the program,” he said.

“It was really important, as we see more and more infill development, to start undoing some of the damage done with urban renewal and build owner-occupied housing in the neighborhood,” said Ald. Sara Eskrich, 13th District, who represents the area. “The program has been quite successful in removing some of the financial barriers.

“It’s really a responsive program to a community need,” she said.

The Greenbush program attracted enough interest that it ran out of appropriated funds and was temporarily shut down with changes made to guidelines between March and December 2016.

In fact, interest in the Mansion Hill-James Madison Park and Greenbush programs accelerated, and the program has never been more productive than this year, when the city made 10 loans — five in each neighborhood including those to Linsmeier and Moran — for a total $850,000.

“The program was never going to rehabilitate every single property,” Wachter said. “But if we do two houses on a street, neighbors see it and get inspired to make investments. The goal is to have a ripple effect.”

Small Cap TIF isn’t for every neighborhood, city officials stressed. But in places where houses have been carved up into student housing, it can be a part of a continuing effort to re-strike a balance between rentals and owner-occupied units, they said.

Eskrich and Zellers both would like to see the city do the program again.

Wachter expects more programs in the future, likely near places where it has been done, but cautions that the city will still struggle with the high cost of such projects and making complex loans.

“This is part of a larger story where urban neighborhoods are turning over to a new generation of landlords and homeowners, he said.

City asks: What do you think belongs in Madison's history?

The city is beginning a process to create its first-ever Historic Preservation Plan, featuring an effort to reach out to underrepresented African American, Latino, Asian, Native American, gay and lesbian communities and women.

EXCLUSIVE: Madison and a nonprofit that run the 321 units of low-income housing in "the Triangle" neighborhood at the edge of Downtown are eyeing a major remake.

Amid opposition, developer pushes mixed-use project for Near East Side

As part of the recently adopted budget, the county will fund a $2 million study into the 5.5 mile stretch of Highway M that has long been a thoroughfare and traffic headache for commuters.

The $15 million, coming in 2018, will let the city to continue to channel $4.5 million annually to its Affordable Housing Fund for several years, but without more  borrowing.

Ten people stuck in a malfunctioning elevator for about an hour had to use a ladder to get out of the top of the elevator in a Downtown Madison apartment building.

Zellers, long an activist in neighborhood affairs and a champion of historic preservation, was elected to the City Council in the spring of 2013. The district runs along the Isthmus east of the State Capitol and north of East Washington Avenue.

Peter Linsmeier shows the first floor of his renovated two-flat home near Capitol Square. Linsmeier used a $90,000 forgivable loan from the city to convert former student housing into owner-occupied housing with a rental apartment.

A kitchen under renovation at Peter Linsmeier's home in the Mansion Hill-James Madison Park area.

Peter Moran is using an $80,000 forgivable city loan to begin renovations at 926 Emerald St. in the Greenbush neighborhood. He has already replaced all windows and is doing interior work.