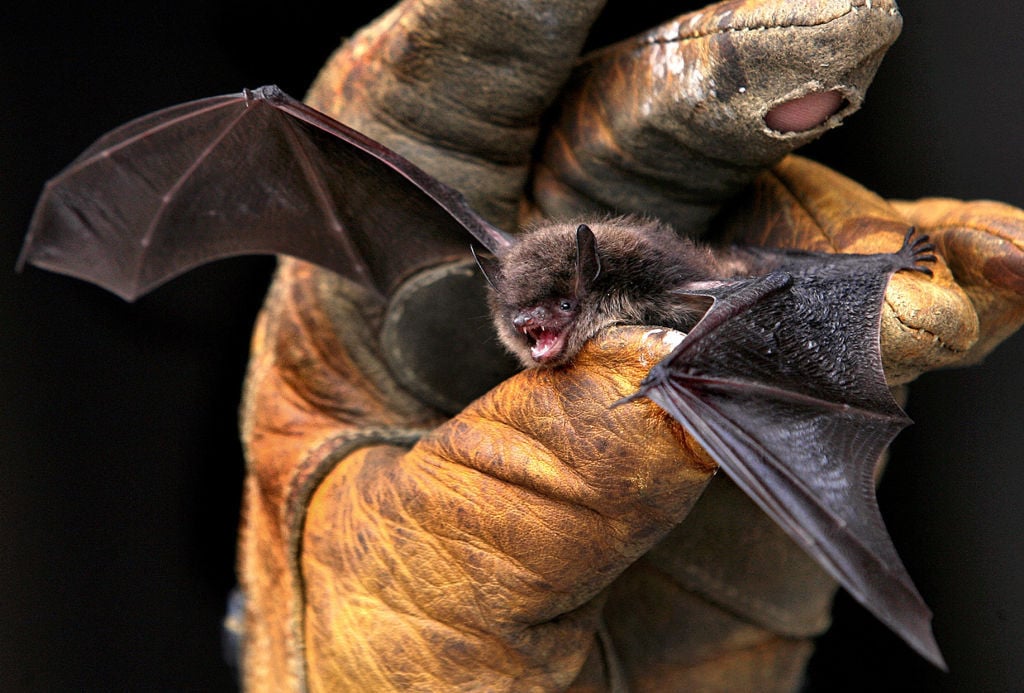 A fungus called white-nose syndrome has had a 'catastrophic' impact on Wisconsin's bat population. Above, a little brown bat photographed La Crosse. 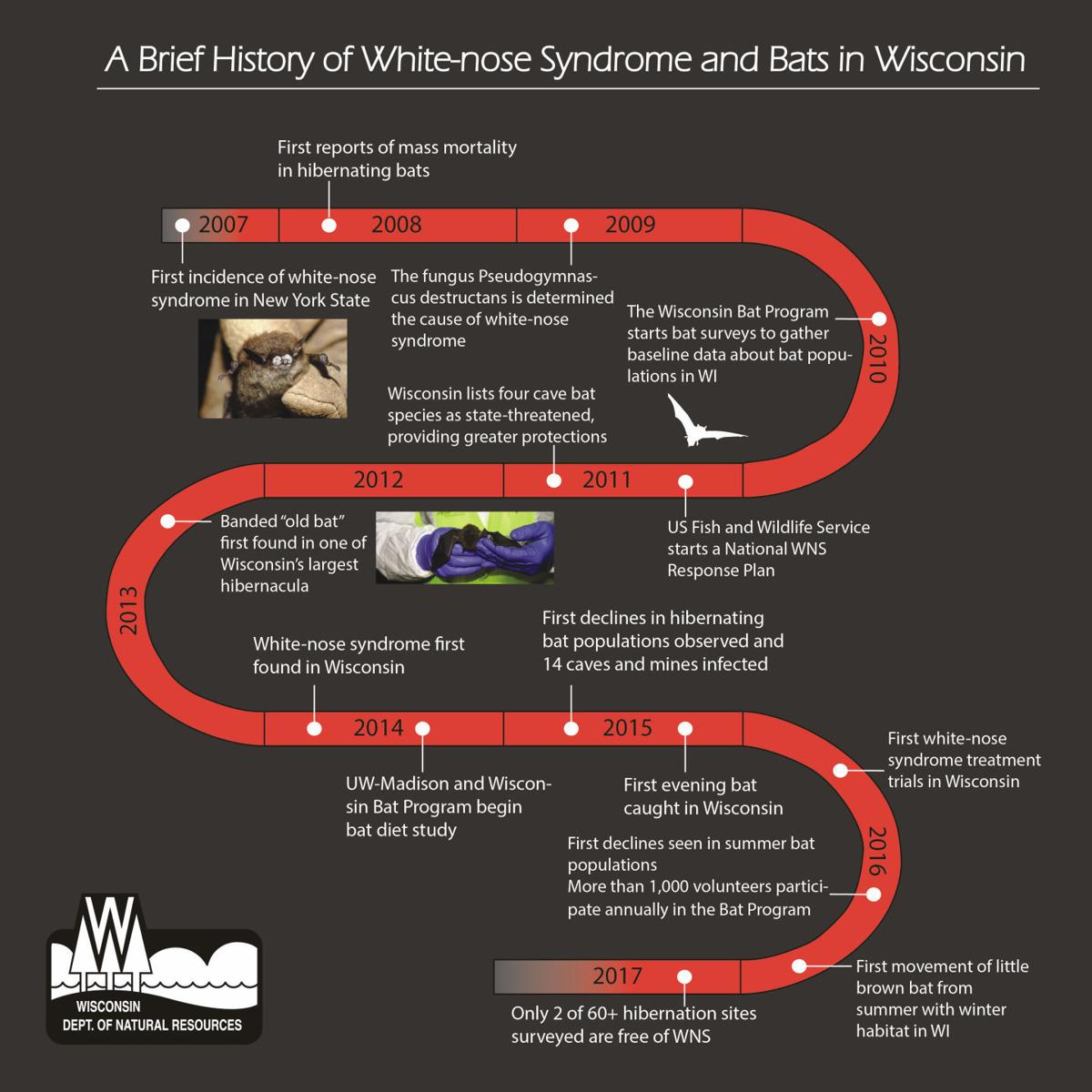 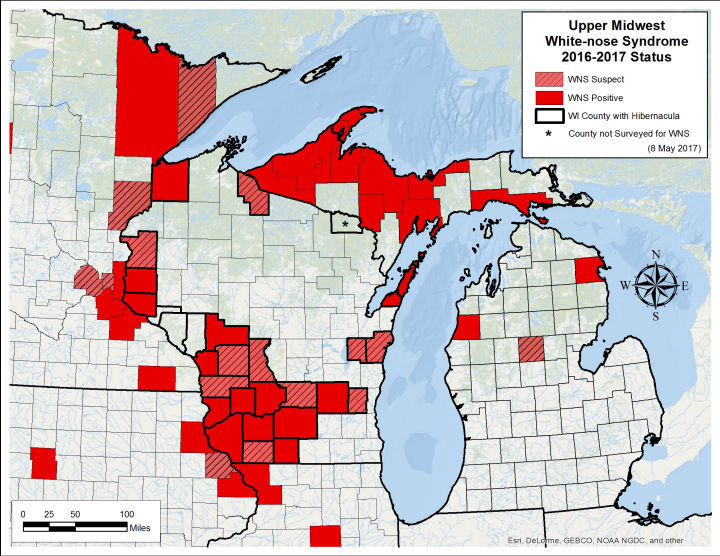 A survey of 60 bat hibernation sites in Wisconsin this year found some where entire populations of the insect-eating mammals had been wiped out and just two that remained untouched by a deadly fungus, the state Department of Natural Resources said Tuesday.

White-nose syndrome caused bat numbers to plummet in the range of 40 percent to 60 percent at two large sites that once accounted for two-thirds of the state’s known bat population, DNR species management section chief Owen Boyle said in a statement.

The deadly fungus has advanced into 24 counties, and at the Grant County site where the fungus was first detected in the state in 2014, DNR surveyors this year found 16 bats compared to 1,200 four years ago, Boyle said.

“The disease has progressed in Wisconsin as it did out east,” Boyle said. “That doesn’t make the numbers any easier to see. The effect of white-nose syndrome on our cave bats in Wisconsin, as nationally, is catastrophic.”

The first infection was found in New York in 2006. White-nose syndrome is named for the powdery white fuzz that develops on hibernating bats’ noses, ears and wings when they are infected by the fungus Pseudogymnoascus destructans. It causes bats to wake frequently during hibernation and too quickly burn up stores of fat needed to survive winter.

Because each bat can eat 500 to 1,000 mosquito-size insects in an hour, the disease may result in increasing swarms of pests. One study by the National Wildlife Health Center estimated the insect suppression provided by bats was worth billions of dollars annually to U.S. agriculture.

Before the disease hit Wisconsin, the state had one of the upper Midwest’s largest populations of cave-dwelling bats with 350,000 to 500,000 hibernating here each winter. In summer, pregnant and nursing bats often gather in maternity colonies.

The DNR is shifting its focus to try to learn why bats from some hibernation sites survive, said Paul White, who leads the agency’s efforts related to bats. If some bats are genetically resistant, they may help the species rebound, White said.

“We’re not ready to give up hope that we will continue to find survivors, and we want the public to remain an important part of telling the story of how bats come back,” White said.

People can help by building and installing bat houses, by avoiding disturbing bat roosts between June 1 and Aug. 15 when bats are raising their young, and by helping to monitor bat populations.

The DNR asked the public to email DNRbats@wisconsin.gov with reports of buildings where bats are present in summer as well as sites where bats are no longer being seen. More information can be found on the DNR website at dnr.wi.gov/topic/wildlifehabitat/bats.html

Bats provide billions of dollars in crop pest control while slowing the spread of insect-borne diseases.

The disease doesn't spread to humans, but when bat populations collapse, people and crops are affected by surges in insects.

Follow-up testing of caves and mines indicate the disease remains isolated to a Grant County location where it was found this year.

A fungus called white-nose syndrome has had a 'catastrophic' impact on Wisconsin's bat population. Above, a little brown bat photographed La Crosse.