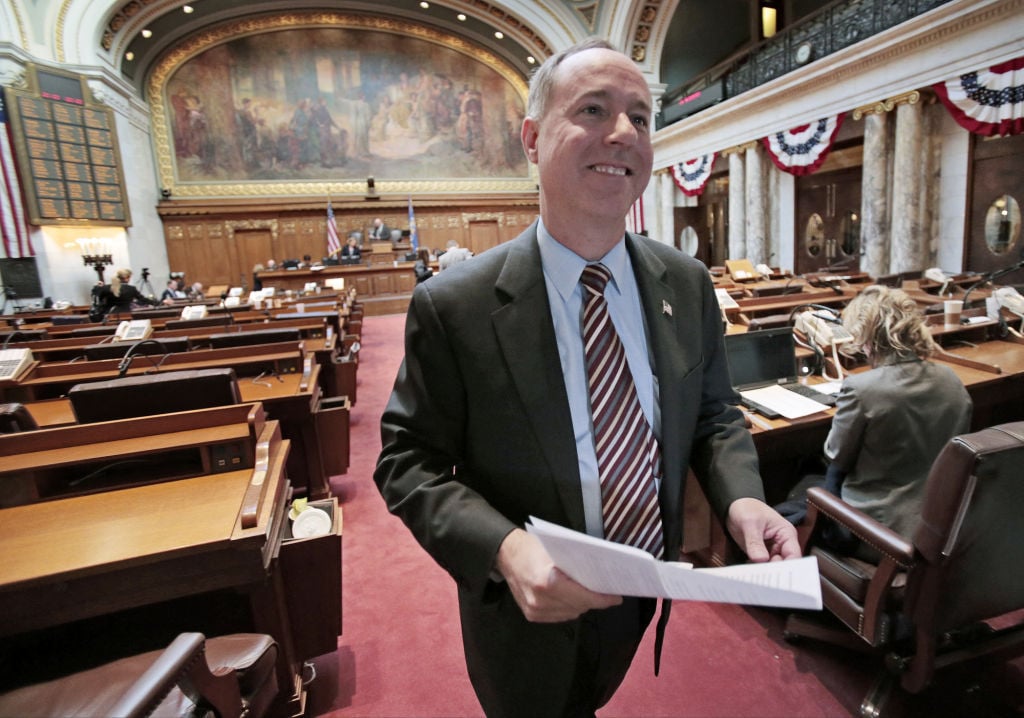 Wisconsin Assembly Speaker Robin Vos, R-Rochester, walks off the floor after passage of right-to-work legislation in the Assembly at the State Capitol in Madison on Friday. 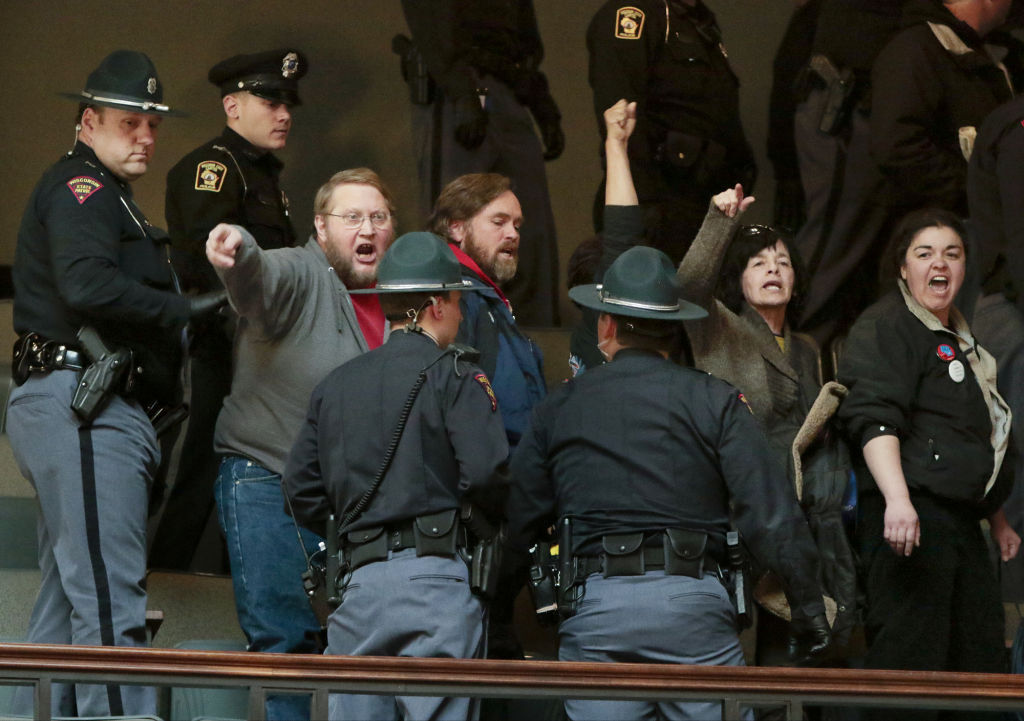 Protesters yell as they are cleared from the Assembly chamber gallery during debate on right-to-work legislation. As lawmakers opened debate they announced they expected civil debate, but observers erupted in chants. 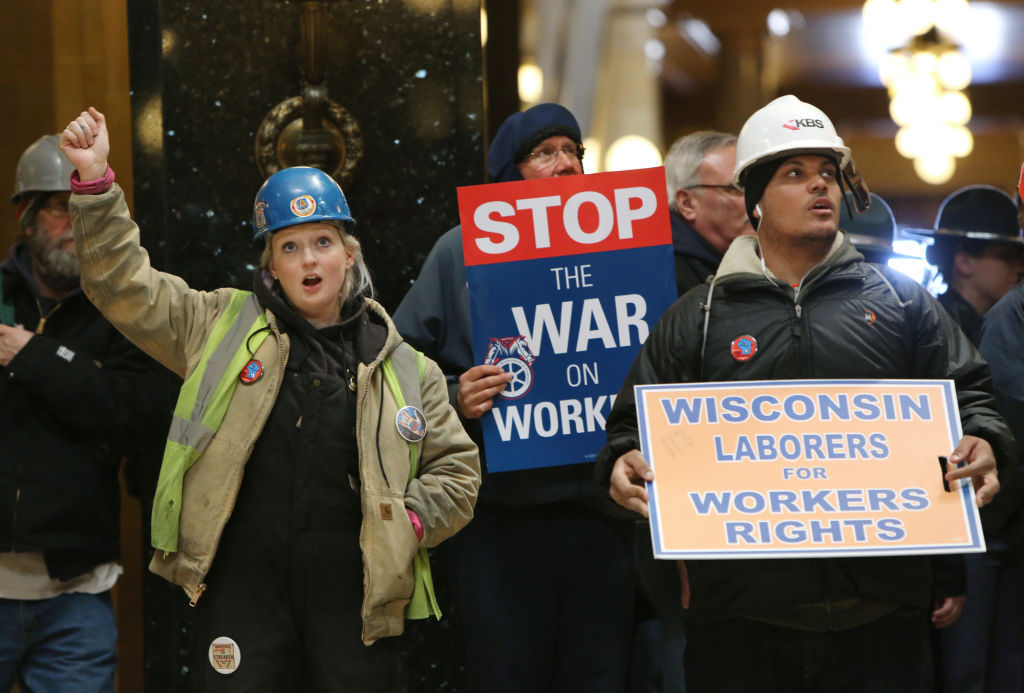 Mary Will of Minneapolis and Local 68, left, and Corey Smith of Local 113 in Milwaukee  chant "Union Strong" inside the state Capitol as the Assembly debated a right-to-work bill Thursday. 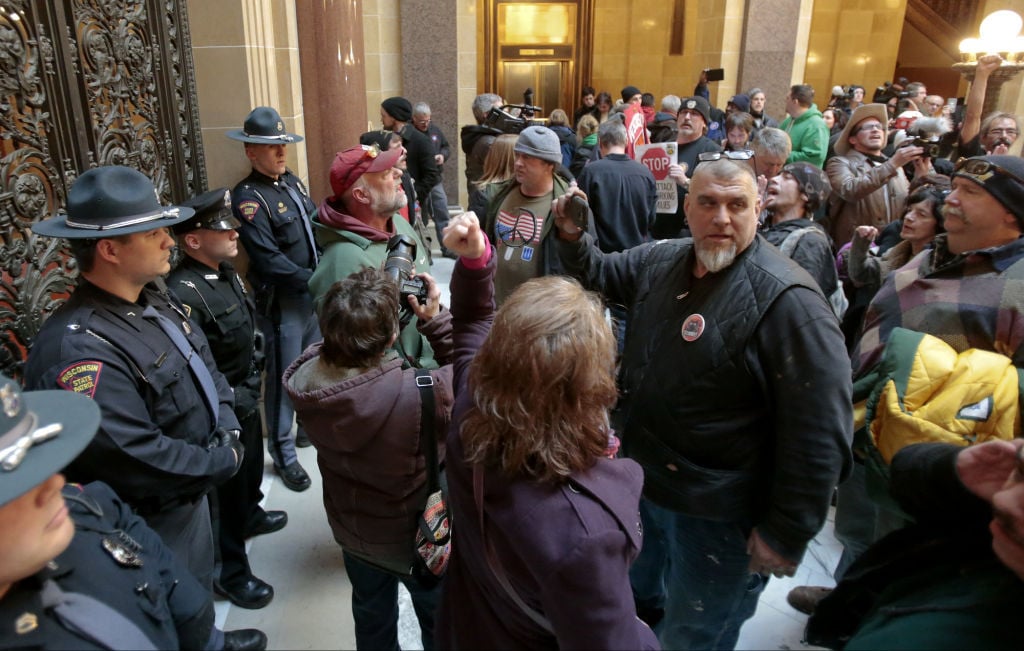 Police guard the doors to the Assembly chamber as protesters gather outside and chant during debate on right-to-work legislation. 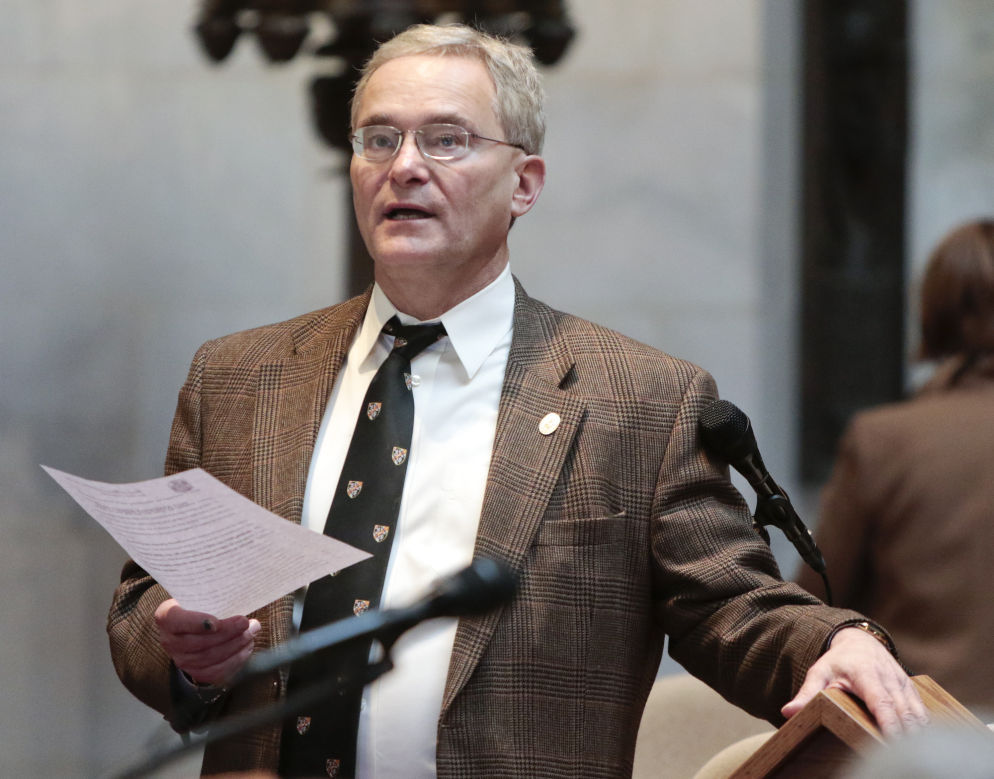 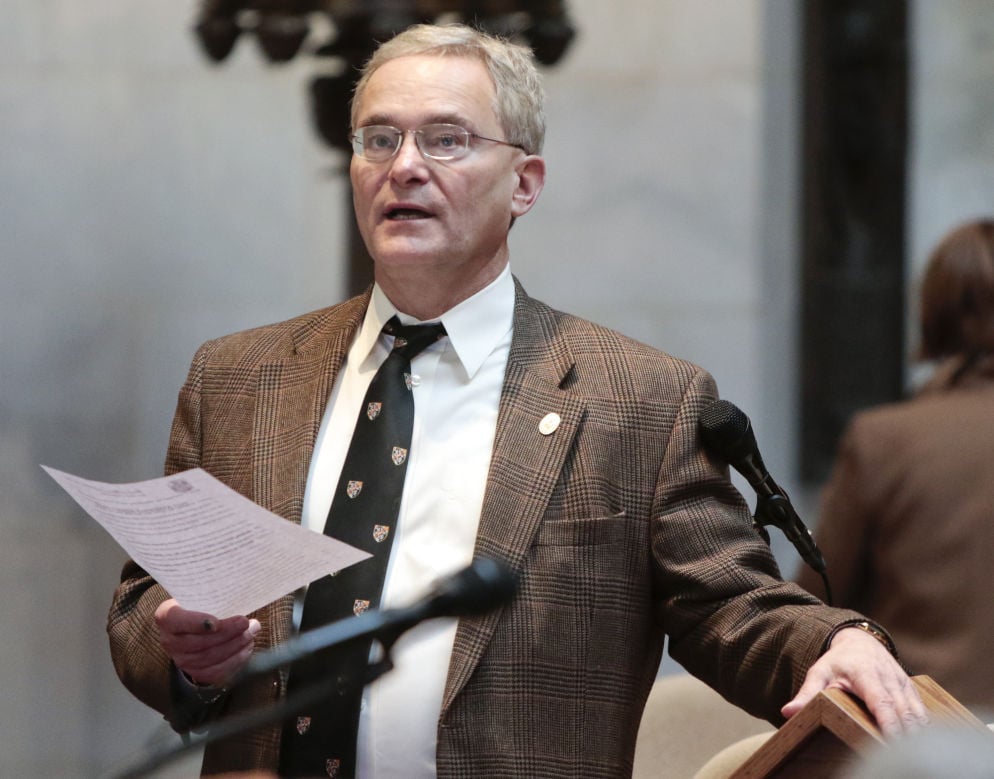 The Wisconsin Assembly early Friday completed a marathon debate by passing a right-to-work bill that would allow workers in unionized workplaces to opt out of paying union dues.

Minority Democrats kept their Republican rivals up all night debating the proposal.

The session began at 9 a.m. Thursday with debate starting around 1 p.m. Democrats have given long speeches warning that the law would drive down wages and undermine worker safety. Republicans maintained that it would give workers freedom to choose.

Democrats had conceded that Republicans had the votes they needed. For several hours the majority party offered little resistance, although Rep. Dale Kooyenga, R-Brookfield, stood up around 3:45 a.m. and told an emotional story about how his father is a union garbage man but respects that his son believes right-to-work fosters workplace freedom.

Rhetoric sharpened at the vote neared.

"This bill is a disgrace," said Rep. Chris Taylor, D-Madison.

Rep. Dave Murphy, R-Greenville, said one Democratic representative  earlier was "droning on and on about nothing."

Rep. Fred Kessler, D-Milwaukee, maintained that the law was unfair.

"This only allows freeloaders to get away without paying union dues and getting the benefits of union representation," Kessler said.

The Wisconsin Assembly on Thursday launched into a 24-hour debate on a right-to-work bill that would allow employees in unionized workplaces to opt out of union dues.

By 11 p.m., the 99-member body had not yet taken a vote on Senate Bill 44. Republicans hold a comfortable 63-36 majority, and passage isn’t in doubt. Democrats hoped to make changes to the bill, but none appeared likely to pass. Among them was delaying by three months the effective date of the bill, which is set to become law when Gov. Scott Walker signs it. He has said he will do that Monday.

The debate had a rocky start. Just as Democratic and Republican leaders were saying they expected a civil discussion, shouting erupted from the gallery and police removed all spectators.

Assembly Speaker Robin Vos, R-Rochester, said that he understood that people were angry and frustrated, but disruption could not be allowed. Minority Leader Peter Barca, D-Kenosha, noted that not all of the spectators were yelling and chanting and said it was unfair for everyone to be removed. But the gallery remained empty and most protesters had left by 10 p.m.

Some bill opponents gathered outside the Assembly room, facing off against uniformed police. Others waited outside Walker’s office before dispersing.

Department of Administration spokesman Cullen Werwie said two people were arrested for refusing to stop “screaming obscenities.” Werwie said about 300 people showed up at the Capitol to protest the bill.

Opponents see the bill as a move to undermine the financial strength of organized labor, a key supporter of Democratic candidates. Republicans insist that their main goal is to give workers a choice. They say that if unions provide beneficial services, workers will recognize that and pay dues.

Rep. Chris Kapenga, R-Delafield, said he was tired of hearing that the law would be an unwarranted intervention into relations between private employers and workers who vote for a union.

“That is a complete joke,” Kapenga said, pointing out that the federal government was already involved in the relationship because it protects workers’ rights to form a union.

Rep. Joe Sanfelippo, R-West Allis, said right-to-work is about “choice” for workers. Under the current system, “You’re forced to give your hard-working dollars over without your choice,” he said.

But he said the law is not aimed at killing off unions. Riffing off of a famous gaffe by President Barack Obama, Sanfelippo said, “If you like your union, you can keep your union.”

Legislators on both sides of the aisle quoted statistics aimed at demonstrating the law would help or harm the state economy.

“For some reason, our economic plan is to chase Mississippi,” said Rep. Robb Kahl, D-Monona. “Well, Mississippi is chasing Mexico and China.”

Rep. Jesse Kremer, R-Kewaskum, said he sees the value of organized labor to protect safety and service to the public, but he still wants workers to be able to skip union dues.

“Unions do serve a purpose,” said Kremer, who has been a member of an airline pilots union and a public safety union. “I do believe, though, that no one, no one, should be coerced into joining a union.”

Democrats said all workers should pay for the union-negotiated wages, benefits and workplace safety rules they enjoy.

Rep. Amanda Stuck, an Appleton Democrat whose husband is a union member who does hazardous construction work, said the aim of the law was to reduce union revenue.

“For the authors of this sinister legislation to suggest you are bestowing some kind of right on us is insulting,” Stuck said.

Rep. Fred Kessler, D-Milwaukee, said the Legislature was being “irresponsible” in passing right-to-work. “We are destroying labor peace in Wisconsin,” he said.

Several Democrats said the bill was designed to burnish Walker’s conservative credentials as he travels the country as a potential 2016 presidential candidate.

Rep. Andy Jorgensen, D-Milton, invoked Walker’s 2011 statement to a Republican donor that he would “divide and conquer” by stripping public sector unions of rights first and later by enacting a right-to-work law affecting private-sector labor.

Walker made the statement last week, referring to 100,000 protesters who came to the Capitol in 2011 in an unsuccessful attempt to stop Act 10, which stripped most public sector workers of collective bargaining rights.

“Wisconsin workers were stabbed in the back, their livelihood was threatened and yet they protested peacefully,” said Rep. Gary Hebl, D-Sun Prairie. “To compare them to ISIS is unconscionable.”

“I think the attack on Gov. Walker today is really out of line,” Murphy said, chiding Democrats for mentioning terrorism and President Obama for failing to speak out clearly enough against international violence.

Vos: Walker ‘not pushing’ for bill

In a press conference before the floor session resumed, Vos criticized Democrats and predicted they would needlessly offer amendments to the right-to-work bill and bring Walker into the debate. Democrats had lined up 10 amendments but as of 10 p.m., no votes on them had yet been taken, 13 hours after the floor session began.

Democrats have already slammed Walker because he announced his support for the bill less than two weeks ago after saying for four years that it would be a distraction from more important issues.

In a speech to the state business lobby Wednesday, Walker reportedly said “we” brought the bill forward, but Vos said legislators pushed for the law.

“Gov. Walker has been clear in every meeting I’ve had with him that he was not pushing for this,” Vos said.

Walker spokeswoman Laurel Patrick also said Thursday that while the governor has been a longtime supporter of such laws, legislators introduced the current bill.

“Governor Walker plans to sign the bill on Monday and looks forward to giving employers another compelling reason to consider expanding or moving their business to Wisconsin,” Patrick said.

When the Assembly convened early Thursday for a prayer, police removed a protester from the gallery who shouted, “You don’t see the workers of Wisconsin,” echoing the last lines of “Amazing Grace” after it was sung as part of the opening of proceedings.

The right-to-work measure has already passed the Senate and Vos said he has the 50 votes needed to pass the bill. Wisconsin would become the 25th state to adopt a law allowing employees in union workplaces to opt out of union dues.

Recognizing the bill is almost certain to become law, many speakers turned their attention toward longer-term battles.

During a protest at the Capitol Thursday, Wisconsin AFL-CIO secretary-treasurer Stephanie Bloomingdale encouraged the crowd to pack the state Assembly gallery as legislators debate the bill, then hold its supporters accountable in future elections.

“We are going to remember what they did to us today,” Bloomingdale said.

State Journal reporters Dean Mosiman and Nico Savidge and the Associated Press contributed to this report.

Photos: Right-to-work taken up in Assembly

Wisconsin Assembly Speaker Robin Vos, R-Rochester, walks off the floor after passage of right-to-work legislation in the Assembly at the State Capitol in Madison on Friday.

Protesters yell as they are cleared from the Assembly chamber gallery during debate on right-to-work legislation. As lawmakers opened debate they announced they expected civil debate, but observers erupted in chants.

Mary Will of Minneapolis and Local 68, left, and Corey Smith of Local 113 in Milwaukee  chant "Union Strong" inside the state Capitol as the Assembly debated a right-to-work bill Thursday.

Police guard the doors to the Assembly chamber as protesters gather outside and chant during debate on right-to-work legislation.