In a near-unanimous vote in the state’s first partially virtual session Tuesday, the Assembly passed legislation in response to the COVID-19 pandemic to ensure the state will receive more than $2 billion in federal aid.

Tuesday’s session was unlike any previous legislative meeting in Wisconsin history, with several dozen lawmakers spread out in the Assembly chamber and the remaining lawmakers present in the galleries or attending remotely from home — all in an effort to maintain social distancing recommendations meant to reduce transmission of the respiratory disease.

The legislative package passed the Assembly 97-2, with Milwaukee Democrats Jonathan Brostoff and Marisabel Carbrera voting no. More than half the Assembly participated in the session from home, with Minority Leader Gordon Hintz, D-Oshkosh, the only Democrat in the chamber.

Assembly Speaker Robin Vos, R-Rochester, and Hintz — the only two lawmakers to speak on the legislation Tuesday — applauded the Legislature for reaching a bipartisan agreement. Both also cautioned that more will need to be done in the future to respond to the outbreak, which has put a strain on the state health network and economy.

“It’s impossible to act today and say, ‘This is the last day and we’re addressing any potential challenge that we know,’ because we don’t know what those are,” Hintz said. “So I think with that kind of uncertainty we need to be standing ready to go and this can’t be our last day.”

But while Democratic members of the Assembly have sought increased spending to respond to the COVID-19 outbreak, Vos cautioned that the virus could force the state to cut spending.

A GOP proposal that was cut from the legislation would have implemented a spending freeze in the second year of the state’s two-year budget, Vos said.

In a joint statement, Brostoff and Cabrera said that while the bill “does include some important and helpful measures, they amount to little more than scraps for the thousands of Wisconsinites who have already been forced to wait while Republicans dragged their feet on providing relief to our citizens.”

“AB 1038 is a pig with lipstick, and it doesn’t deserve to win any beauty contests,” Brostoff said.

The Senate is expected to take up the package on Wednesday, also in a partly virtual session. As with the Assembly, members will have the option of attending the session in person or online.

The legislation aims to complement the more than $2 billion in federal aid that Wisconsin expects to receive. Part of the bill would allow the state to collect roughly $300 million in Medicaid funding in the final half of the 2019-20 fiscal year.

The legislative package also will waive the one-week waiting period for unemployment benefits until February 2021. Other provisions in the package include increasing the state’s ability to borrow and prohibiting insurance providers from discriminating against COVID-19 patients.

In addition, the bill would allow the state budget committee to spend up to $75 million during the public health emergency on coronavirus-related needs. It also would direct the Wisconsin Economic Development Corp. to provide Democratic Gov. Tony Evers and legislative leaders with a plan to support major industries in the state that have been adversely affected by the outbreak, including tourism, manufacturing, agriculture, construction and retail.

“Including this provision in our coronavirus relief package is brazenly opportunistic,” Bloomingdale said in a statement. “Republicans are using a pandemic crisis bill to do what they couldn’t do in an above-board democratic process when they were unable to override Gov. Tony Evers’ veto last year.”

Before voting on the bill, the GOP-led Assembly rejected proposed amendments by Democratic members that would have transitioned the remaining elections this year to all-mail elections by mailing absentee ballots to every registered voter in the state and providing funding to administer the change. Other failed amendments would have directed the Department of Health Services to offer grants to child care providers, administer $30 million in small business grants and loans, and provide $5 million for tourism marketing efforts.

During a Monday call with reporters, Evers said he had not seen the GOP package but is hopeful it leads to additional legislation. He noted conversations he had this week with farmers and small business owners about the need to provide financial assistance to those reeling from the outbreak and associated economic downturn.

“There was an expectation on the part of small business owners and workers in the state, as well as our agricultural community — especially them — that the state of Wisconsin can step up and help them out financially,” Evers said. “Hopefully this will not be a one-shot answer to the crisis here in Wisconsin, but an opportunity to establish a dialogue.”

Evers also said there will be a need to address mental health concerns for small business owners and farmers dealing with stress and isolation as a result of COVID-19.

An earlier draft of proposed GOP legislation included language to further weaken the governor’s authority by giving the state’s GOP-led budget committee the ability to cut spending on schools, health care and employee pay, among other things.

That language was later removed.

In late March, Evers called on the GOP-led Legislature to take up a $700 million legislative package meant to address health care needs related to the outbreak, extend the statewide public health emergency indefinitely and boost health care staffing. Many of the spending items proposed by Evers were not included in the Assembly bill.

While applauded as a good first step, Democratic members, as well as public safety and health officials, have criticized the bill for not allocating more state funding to respond to the pandemic.

All mail-in voting happens in other states, but Wisconsin Republicans aren't interested amid COVID-19 pandemic

Despite problems with in-person and absentee voting during the COVID-19 pandemic, there's little indication lawmakers will seek an overhaul of the voting system. 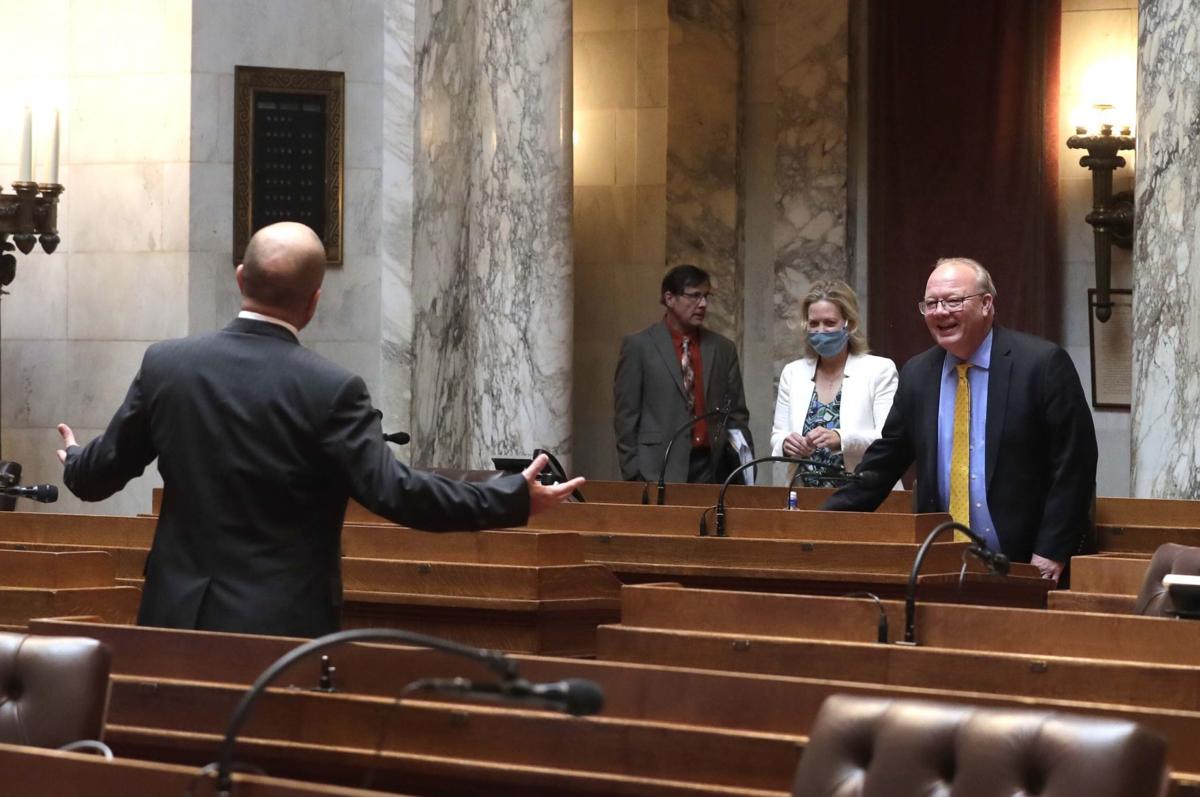 Assembly Minority Leader Gordon Hintz, D-Oshkosh, left, invites other members to socially distance as they arrive in the Assembly chambers Tuesday. The Wisconsin Assembly met, many from home via video, to vote on a bill that would give the unemployed more benefits, provide insurance protections for those infected with coronavirus and shield health care providers from liability. 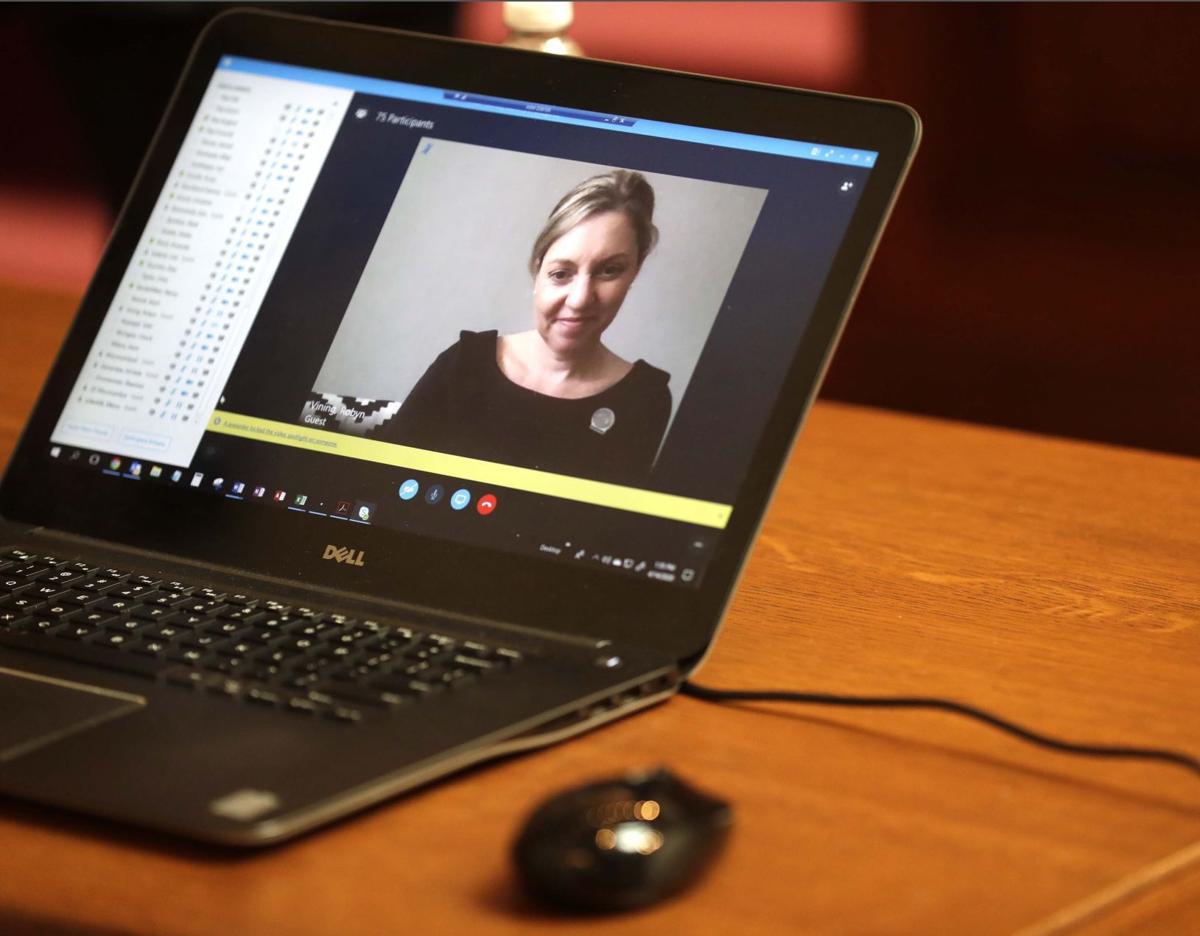 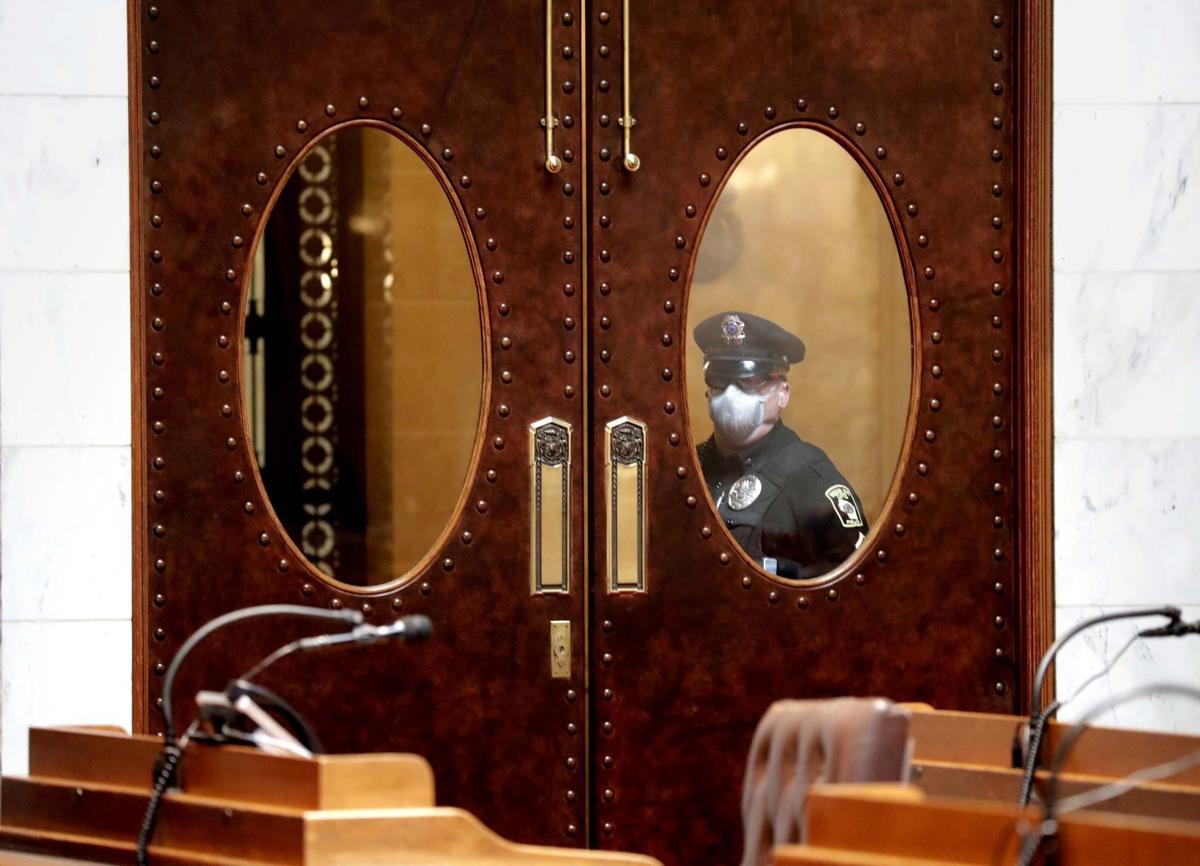 A Capitol Police officer watches the activity from outside the Assembly chambers as representatives meet Tuesday to pass legislation to address the COVID-19 pandemic and its effect on the state economy.