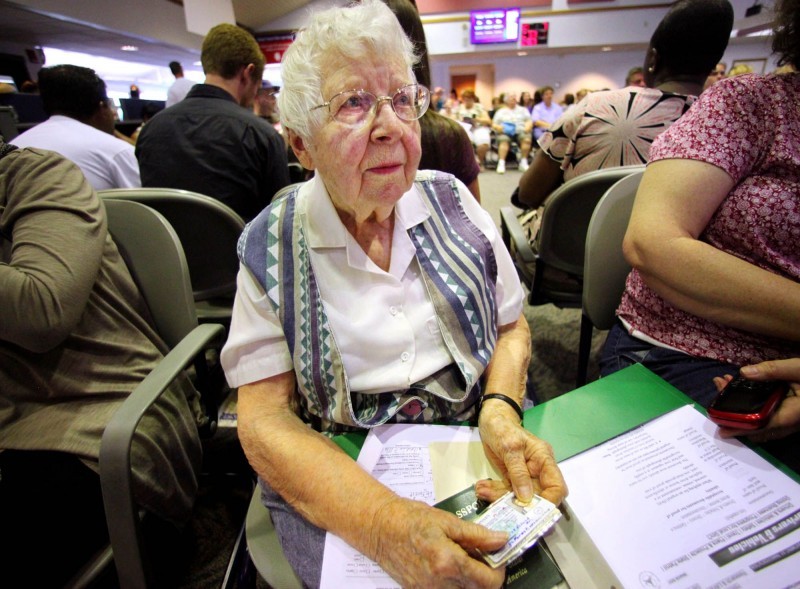 Adeline Marty, 97, of DeForest, waits to have a photo ID card made at a Madison DMV Center so that she can vote. 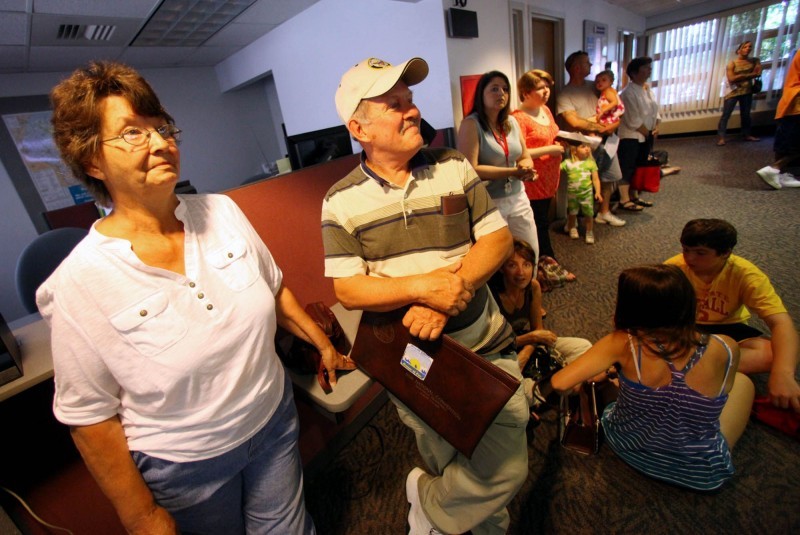 JoAnne and Frank Balthazor wait at the Division of Motor Vehicles Center on Madison’s Far East Side on July 1 for JoAnne to get a state-issued photo ID card. It was an unusually busy day at the DMV, and the Balthazors were there about two hours. 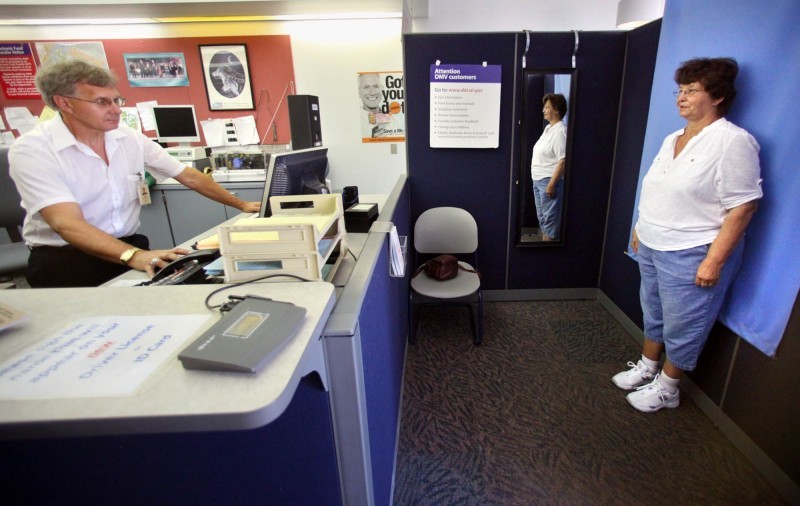 JoAnne Balthazor, right, is photographed for an identification card by Denny Jones at the state Division of Motor Vehicles in Madison.

JoAnne Balthazor can't remember ever not voting in an election — it's that serious of a civic duty to her.

That's why Balthazor, 69, a retired postal clerk from Madison, was getting a state-issued photo identification card Friday at the Division of Motor Vehicles Center on the city's Far East Side.

A new state law requires residents to show photo identification to vote. Balthazor does not have a driver's license — a physical disability prevents her from driving — and so needed to find another way to prove her identity.

The law includes a clause that allows residents to get a state photo ID card for free if they need it to vote. The cost is $28 otherwise. Friday was the first day the cards were available for free.

Balthazor, who waited an hour and 51 minutes to get to a window, was not pleased with the process or the law.

"This is what people are going to have to go through," she said. "I think a lot of people are just going to say the heck with it and leave."

Supporters say the law will reduce voter fraud and that it's reasonable to expect the same level of scrutiny for voting as for cashing checks, for instance. At the bill's signing May 25, Republican Gov. Scott Walker said the law "protects the integrity of every single vote."

Opponents say voter fraud has not been a significant problem and that the added hurdles will disenfranchise people.

Although most of the bill took effect June 10, its fiscal component — the free ID part — didn't kick in until the 2011-13 biennial budget took effect Friday.

Each year, about 98,000 state residents get photo ID cards — 58,000 of them renewals, the rest new applicants, said Patrick Fernan, the DMV's operations manager. (Only a person without a valid driver's license is eligible for a card — it's one or the other.)

The DMV estimates about 70 percent of those 98,000 people will now get the cards free. Consequently, the state projects an annual revenue loss of $1.9 million to its transportation fund, which is separate from DMV's budget, Fernan said.

Photo identification will be mandatory starting with the spring 2012 primary elections. However, voters are being asked to get in the habit by showing photo IDs at any special and recall elections before then.

Other acceptable forms of ID for the polls include a U.S. passport or a student photo ID with an issue date, a signature and an expiration date not later than two years after the issue date.

The new law was not finding a lot of fans Friday at the DMV Center on the Far East Side.

"I think it's quite an unnecessary action," said Adeline Marty, 97, of DeForest, who joked that politicians must think she has a "criminal face." She stopped driving in 1990 and now needs the photo ID card to vote.

At one point, a woman leaving with her photo ID card yelled to the 100 or so other people in the waiting area, "ID cards are free today. Don't let them tell you otherwise."

In the parking lot, the woman, Jennie Vasen, 43, of Madison, said she had called ahead and been told it would cost her $14 to renew her photo ID. That's all the money she brought. When she got to the counter, she was told $28, she said.

Disgusted, Vasen said she left without a card but stopped at a nearby free clothing center run by the Community Action Coalition and learned she was eligible to get the card for free. She marched back to the DMV Center and got the card for free.

"I was quite irritated — they didn't even tell me anything about that," she said.

Leah Rueckert, the person in charge Friday at the center, said employees "have not been told to mention or not mention it."

Asked about the issue, Fernan said "we don't want to be responsible for asking every single person" whether the ID card is needed to vote. People must check a box on the application form to get the card for free.

Plain Talk: State must make it easier for voters to get IDs

Most people can use their existing driver’s license at the polls, but as hard as it is to believe for some of our clueless legislators, not everyone in Wisconsin drives.

Some Madison voters voiced displeasure about the state’s new voter ID law during a practice run Tuesday, but most seemed to take changes in stride, poll workers said. The law also requires voters to sign a poll book. That requirement took effect Tuesday and caught many voters off guard.

State denies politics is behind plans to close DMV centers

Gov. Scott Walker's administration is working on finalizing a plan to close as many as 16 offices where people can obtain driver's licenses, in order to expand hours elsewhere and come into compliance with new requirements that voters show photo IDs at the polls.

DOT workers told not to offer free IDs unless asked

State Department of Transportation employees have been instructed not to offer free photo identification cards to people unless they specifically asked about them first.

What you need to know to get a voter ID card

Any Wisconsin resident who does not hold a valid driver's license may request a photo ID.

Election officials across Wisconsin are bracing for a difficult transition as the state rushes into place new rules for voting signed into law by Gov. Scott Walker Wednesday — including a controversial measure requiring voters to use photo IDs.

Adeline Marty, 97, of DeForest, waits to have a photo ID card made at a Madison DMV Center so that she can vote.

JoAnne and Frank Balthazor wait at the Division of Motor Vehicles Center on Madison’s Far East Side on July 1 for JoAnne to get a state-issued photo ID card. It was an unusually busy day at the DMV, and the Balthazors were there about two hours.

JoAnne Balthazor, right, is photographed for an identification card by Denny Jones at the state Division of Motor Vehicles in Madison.