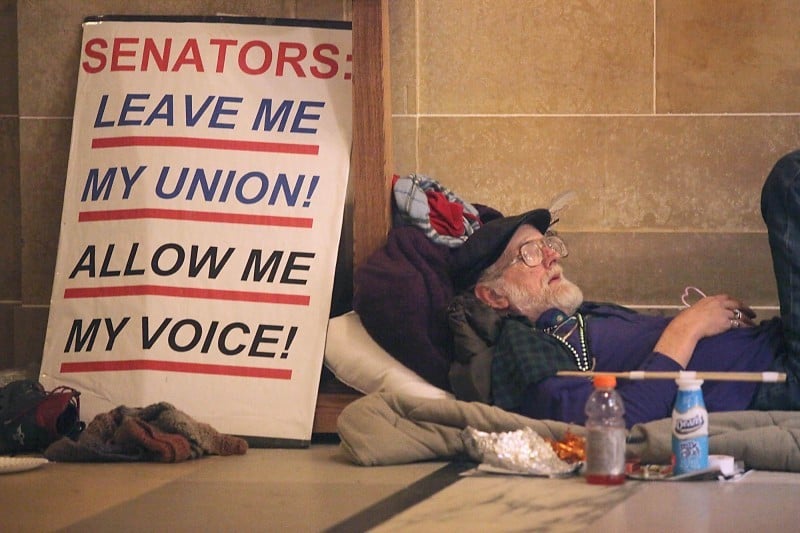 Dennis Liebhaber, who was photographed Thursday, has spent four nights at the Capitol. Liebhaber, of Madison, is retired but has been a member of steelworkers, painters and meat packers unions. 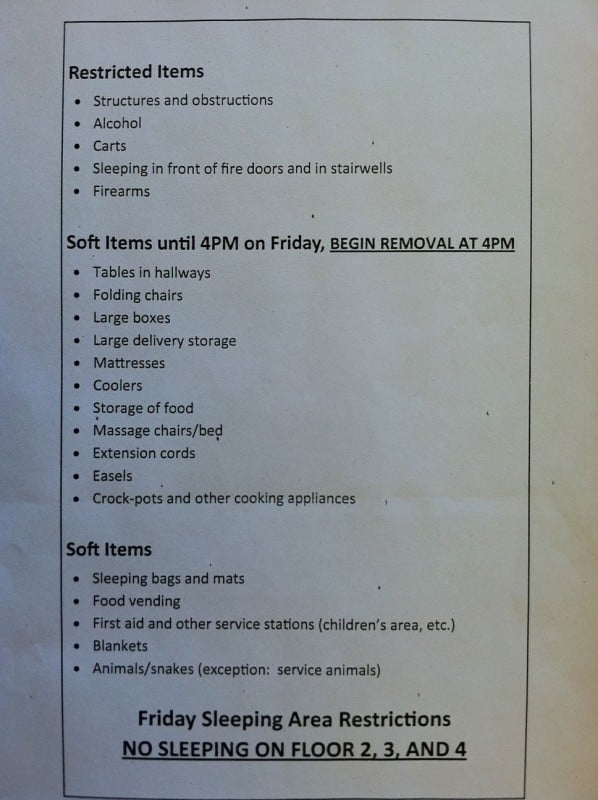 A flier circulated by police says "Friday sleeping area restrictions" include no sleeping on the second, third and fourth floors, meaning protesters may still be allowed to camp out on the ground floor of the building. 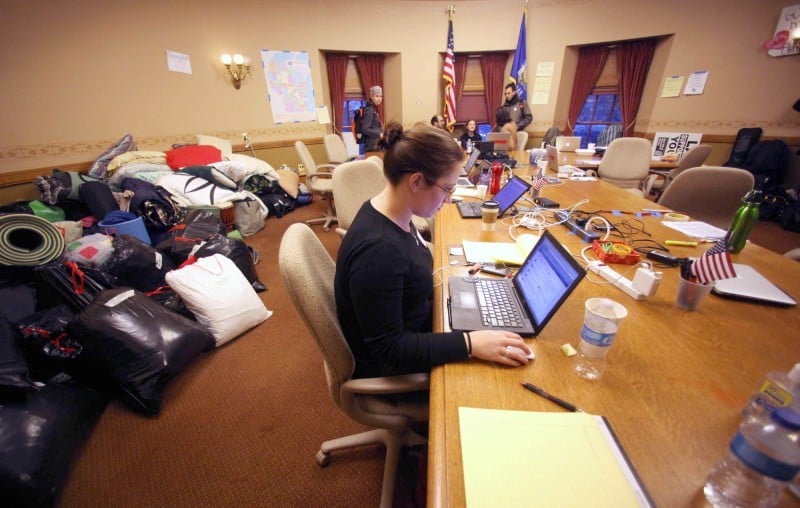 Sarah Cushing, a member of the UW teaching assistant organization, uses a hearing room on the third floor of the Capitol on Thursday.
CLAY BARBOUR and MARY SPICUZZA | Wisconsin State Journal

Ever since massive demonstrations began breaking out at the Capitol last week, police and protesters have maintained a convivial relationship. Now it's about to get downright cozy.

On Friday, the head of the Wisconsin Professional Police Association called on the governor to keep the Capitol open to overnight campers, and even urged members to join them.

"As has been reported in the media, the protesters are cleaning up after themselves and have not caused any problems," said WPPA Executive Director Jim Palmer, who urged the governor "not do anything to increase the risk to officers and the public."

Going one step further, Palmer suggested fellow officers come to the Capitol Friday night to sleep among the protesters.

"Law enforcement officers know the difference between right and wrong, and Gov. Walker's attempt to eliminate the collective voice of Wisconsin's devoted public employees is wrong," continued Palmer. "That is why we have stood with our fellow employees each day and why we will be sleeping among them tonight."

Capitol Police plan to begin removing air mattresses and various other items used by protesters who have been camping out in the Capitol for more than a week on Friday afternoon.

At 4 p.m. Friday, police will begin barring access to the Capitol for overnight campers to the second, third and fourth floors, according to a flier circulated by police. The policy appears to leave open the possibility that protesters will still be allowed to camp out on the ground floor of the building.

Cullen Werwie, a spokesman for Gov. Scott Walker, said the policy is intended "to ensure the safety and public health of all individuals."

Lawmakers approved a rule change this week clearing the way for Capitol police to close down the statehouse and end the biggest rally in recent memory.

The statehouse must remain open to the public as long as lawmakers are in session, or when a public hearing is under way. Otherwise it typically closes at 6 p.m. The new rule ends public hearings by 6 p.m. as well. With no public hearing and no session, there is no reason to keep the building open.

The end of the peaceful festivities cannot come soon enough for Republican legislators, who have dealt with noise, crowds and near-constant haranguing. Senate Majority Leader Scott Fitzgerald, R-Juneau, even called the situation a "powder keg."

"Have you ever gone to work and had to fight huge crowds, loud chants and constant drumming?" said State Rep. Robin Vos, R-Rochester. "You expect a certain amount of decorum here, but that's not what has gone on the past few weeks."

But to many Democrats, the huge crowds have been a welcome sight. They would like to see them stay.

"Making them leave is just another example of the Republicans trying to silence the people," said State Rep. Tamara Grigsby, D-Milwaukee.

The rally in its present form started on Feb. 15, when the Legislature held its public hearing on Gov. Scott Walker's budget repair bill, which would severely curb collective bargaining rights for most state and local employees. The meeting attracted thousands. It ended 17 hours after it began.

Democratic lawmakers, who felt thousands of voices went unheard, continued the meeting in an unofficial capacity in another room. That meeting ran for a week straight, with officials suspending it only when the Assembly session started Tuesday.

The public hearing opened the door for overnight stays. Since it started, there has been a 24-hour presence inside the Capitol with throngs of people chanting and marching during the day, and hundreds sleeping on blow-up mattresses and makeshift pallets at night. The event, to many, seems one mud slide away from Woodstock.

Drum circles and horns blow into the night. The building's limestone walls are covered in hand-made posters. And the air is thick, with more than a hint of gym locker. Scattered among the crowd are homeless people, who have taken advantage of the situation.

But to many of the protesters, this has been a lesson in civic responsibility and support for union workers. They say the constant presence of the public has helped lawmakers understand the seriousness of the law they are debating.

"We are making a difference, I really believe that," said Dan Wise, a 19-year-old Madison Area Technical College sophomore. "If they kick us out, we will protest outside. But we will still protest."

Wise said he leaves the Capitol to attend class and take showers. He has been joined during the past 10 days by his friends, Neporsha Hamlin, 19, and Alyssa Skaar, 21.

"This has been a life experience we will never forget," Hamlin said. "I feel like all of these people are family."

Marathon Assembly session continues, but end could be in sight

Senate Republicans moved forward on Gov. Scott Walker's controversial budget repair bill on Friday, but they were not able to send it to the governor's desk for his signature because 14 Senate Democrats are still boycotting the session, preventing the Senate from reaching a quorum.

The nightly sleepover at the state Capitol that has been occurring for almost two weeks will end on Sunday when police close the building.

Click here to see all of the Capitol photo galleries.

Protesting means all-night stays at the Capitol for some people

The protests, and protesters, haven't been just a daily sight at the state Capitol recently. Many people who are against the GOP efforts have been sleeping in the building as well.

Protesters in Madison are getting support from near and far, whether it's the offer of a couch to crash on near the Capitol or Ian's Pizza ordered from around the country.

Dennis Liebhaber, who was photographed Thursday, has spent four nights at the Capitol. Liebhaber, of Madison, is retired but has been a member of steelworkers, painters and meat packers unions.

A flier circulated by police says "Friday sleeping area restrictions" include no sleeping on the second, third and fourth floors, meaning protesters may still be allowed to camp out on the ground floor of the building.

Sarah Cushing, a member of the UW teaching assistant organization, uses a hearing room on the third floor of the Capitol on Thursday.
© Copyright 2021 Capital Newspapers Inc., madison.com , 1901 Fish Hatchery Rd Madison, WI | Terms of Use | Privacy Policy
Powered by BLOX Content Management System from TownNews.com.
You don't have any notifications.